It always seems fitting that Optimus Prime is one of the first figures out for a new line. It has been consistent for as long as I can remember. Now with the Galoob/MicroMachines branded Titanium series introducing the 6in transformable die-cast line, Optimus Prime is once again the inagural figure. This Prime is the War Within version that was made popular by the now defunct comic book agency formerly known as DreamWave. 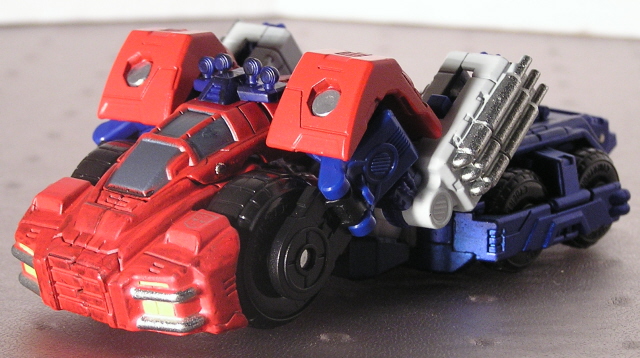 In the War Within universe, Optronix was an archivist who was chosen to receive the Matrix of Leadership, thus converting him to Optimus Prime. His alt form is a Cybertronian semi. When Don Figuroa designed the artwork to be used in WW, he mentioned that the alt/robot modes were made so that if a real figure were made, it could be done easily. That being said, the alt mode is a virtually perfect rendition. Everything from the clearance lights to the guarded front headlights to the diagonal exhaust stacks is true to it's comic roots. The color scheme is also true to Optimus Prime, primarily red and blue with some silver accents.

One nice feature is that his Robot mode buster rifle can be held in place at the rear. The only noticeable kibble is at the rear, where you can see the retracted hands and the folded feet. 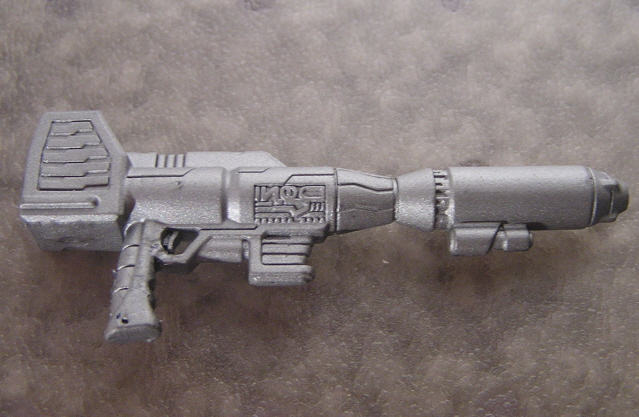 Speaking of his buster rifle, it is highly detailed and resembles his G1 rifle in almost every way except color. The rifle itself is made of rubber and while mostly rigid, it does have some flexibility. Due to Prime's hand design (see below), the gun is highly accurate. Instead of the traditional pegged stock, you now have a detailed handle and a trigger. This is a very nice departure from the norm. 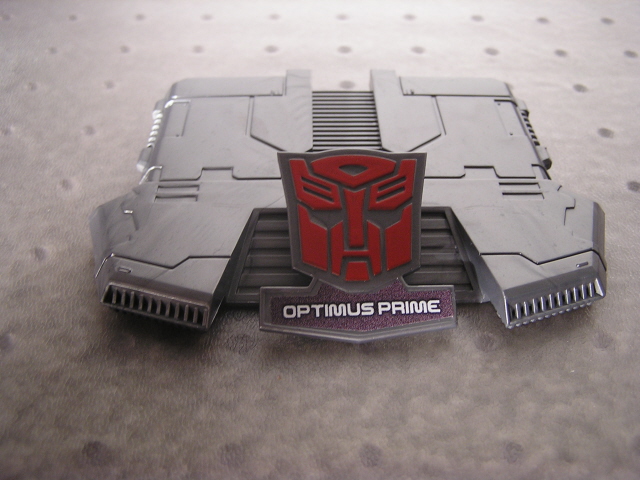 Prime also comes with a base. The base features the Autobot insigina alone with Prime's name. The insignia can be easily removed from the base if you choose to do so. Before going further, I want to comment on the packaging. The dreaded tie wires are back in brute force. There must have been a tie wire for every limb and joint around his body, not including the 3 that held the figure to the clamshell. You have to literally destroy the inner packaging to free Prime from his tie wire prison. Also, in what would seem to be a cost saving measure, the instruction pamphlet is no longer made of gloss stock paper, but simple corrogated paper. With the surging price of zinc (a primary component of the die-cast process), they may have cut some inconsequential corners to keep costs down. Finally, there is a small pamphlet that has some of the other offerings of the titanium line, mostly the 3" line. Transforming Prime to Robot mode (which is his packaged mode), is pretty simple. 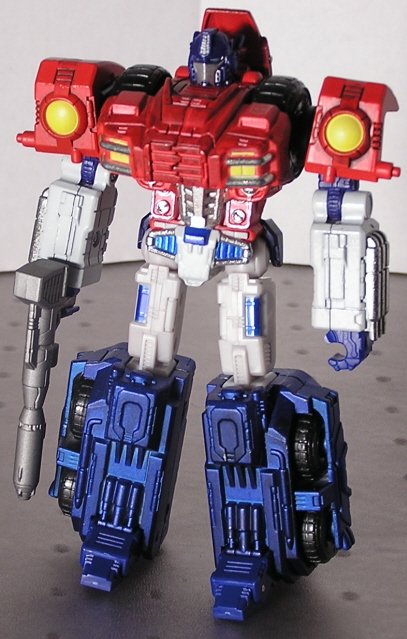 Prime's robot mode is also a near perfect homeage to the War Within series. Mostly blue in the legs and red in the chest with silver and yellow highlights, there is a great amount of detail in the figure. The face in particular keeps Don's artwork very well in mind. There is a fair amount of articulation including the knees, hips, shoulders, elbows and head. However, alot of the range is restricted due to the design. For instance, the hip guards limit hip movement considerably and there is no vertical shoulder movement at all, just circular horizontal movement. The hands are in a cupped mold, like Armada/Cybertron Blurr. 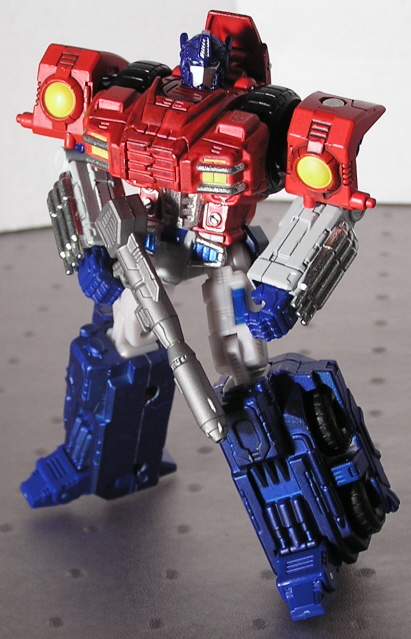 Unfortunately, in Robot mode this figure is far from perfect. The die-cast tends to make this figure pretty heavy. Because of this and the relatively loose joints, keeping pose positions can border on frustrating. The arms have a tendancy to go limp at his side and the restricted knee and hip joints don't give much room for leg posing. Also, the figure is extremely delicate. It is extremely easy to dislodge his legs at the hips and his arms at the shoulders. Fortunately, they are easy to put back in place. This is definitely not a kid's toy and not one you want to fiddle around with too much.

War Within was a great series that unfortunately has not been continued. It now lives on with WW Optimus Prime, who will soon be joined by other WW figures. While this figure is higly detailed and a joy to look at, it is definitely not meant to be handled much. If you do transform or pose your figures regularly, caution is EXTREMELY advised.