It has been a wild ride thru the Cybertron line. This has been one of the most impressive figure lines in the TF universe in ages. Lots of great homeages, excellent features and some surprising character upgrades have kept this line very interesting indeed. Of course, with time all good things must come to a close. Cybertron is very near the end of it's product line. While there are no new continuums in the works, there are 2 great classic lines hoping to fill the gap. This review is for the very last original mold to be released for Cybertron. Quickmix is the gentle yet loyal vice commander for Gigantian. He serves as Metroplex's second-in-command and confidant. 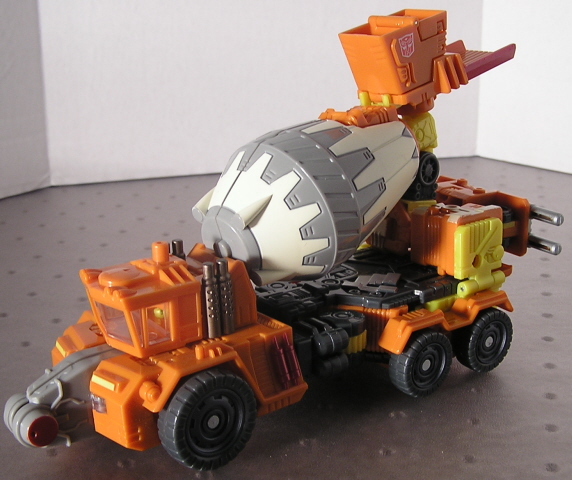 Quickmix's alt mode is a cement truck. A lot of people have pointed at homeages to G1 Targetmaster Quickmix. The primary colors would certainly suggest a homeage. Quickmix is mostly construction orange with a white and gray mixing drum. He has yellow, silver and black accents throughout. The design is very original yet somewhat clumsy in execution. First, the feet for his robot mode stick out of the front end. It can be a love it or hate it design quirk Second, you can clearly see his hip joints under the mixing drum. It's a minor annoyance. His rear end is comprised of his left arm. Even the left hand is left exposed. His head is even fully exposed on the rear overhang. It's too bad a little more time wasn't taken to hide these kibble points. The figure is otherwise full of nice details, including the quad smokestacks and the mixing drum itself which features an authentic platform. However, I will point out that one area of detail that was sorely left out was the cockpit. Being that the cockpit has clear windows, you have to wonder why they didn't take time to make something at least semi-detailed for it. 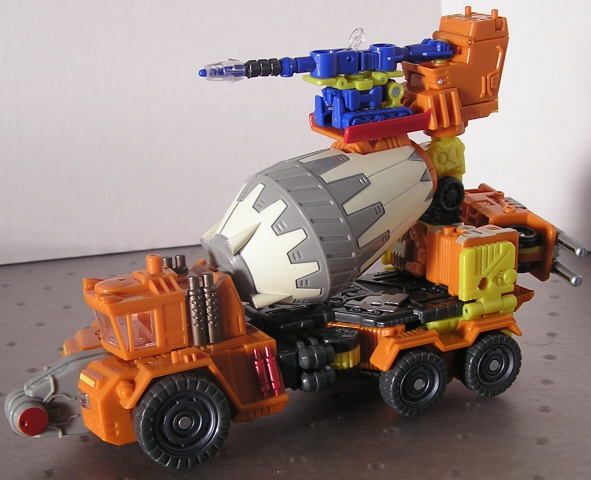 Like the other Gigantian residents, Quickmix comes with his own minicon named Stripmine. Stripmine can bond with Quickmix's mixing platform to become a top-mounted weapon. Let's stop a moment and look at Stripmine in more detail. 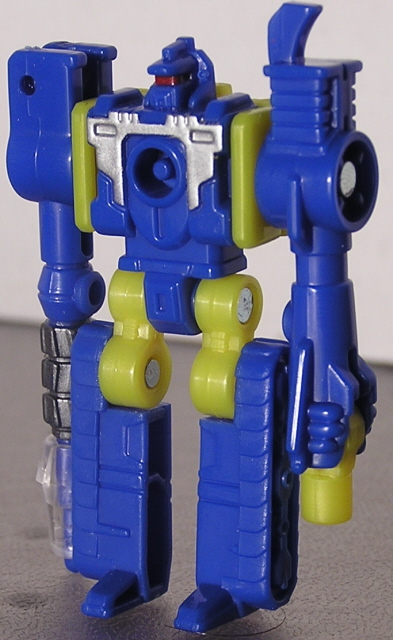 Stripmine's alt mode is, well, a stripmining drill. He is predominantly blue with mustard yellow and black accents, a peculiar choice for a construction vehicle. Stripmine also possesses a radar dish on top of his drill. The drill shaft can be rotated 360 degrees. Unfortunately, there are no wheels or roller for this figure. His robot mode is simple to transform into. Besides the red optic visor, there are no additional colors that stand out. Overall a decent (if not bland) minicon. 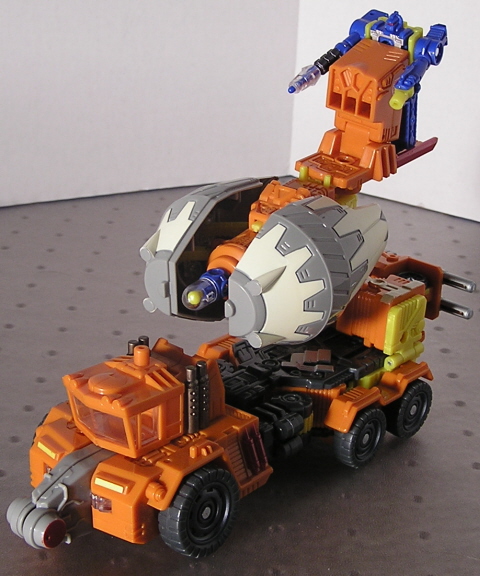 Inserting the Cyber Key into his slot in the mixing drill requires moving the mixing platform a bit. Once you insert the key, the drum splits open to reveal a launchable missile. While the drum is sadly stationary while in it's normal mode, the Cyber Key mode now allows the drum to rotate a full 360 degree horizontally as well as vertically. 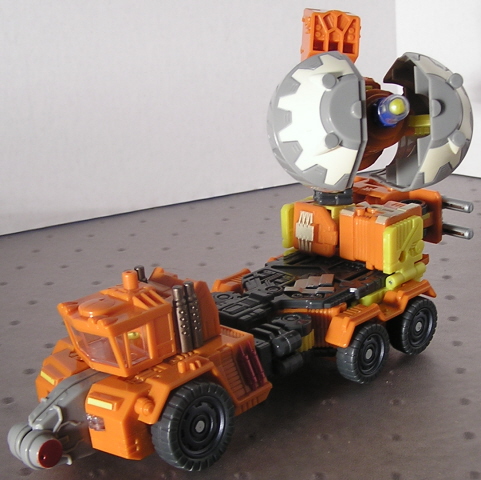 You can also use Stripmine in his robot mode on the mixing platform, which is now a missile cannon platform. Quickmix has an interesting yet fairly simple transformation sequence. It's a mixture of Energon Steamhammer (in the arms) and Cybertron Mudflap (in the rear wheels). 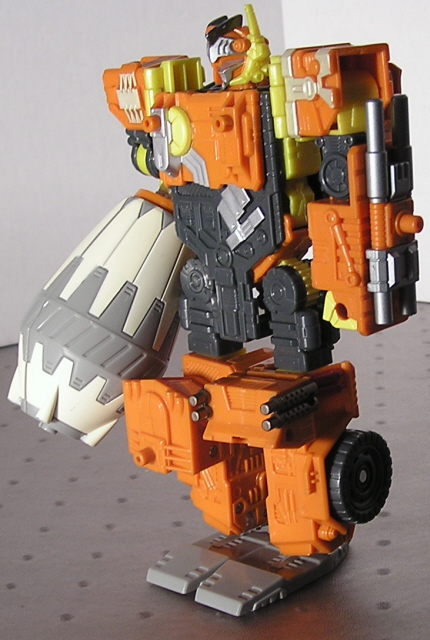 Quickmix's robot mode also has some loose ties to the G1 Targetmaster of the same name. Most noteably the head, which has a similar visor/mandible design. However, this Quickmix also has what looks to be a hands-free mobile antenna setup on the left side. It makes out for a very unique look. His light piping is clear, which is also a unique choice. Overall, his robot mode is nicely executed. Another nice feature of this figure is that Stripmine can mount to a minicon port on Quickmix's left arm (there is another port on each chest and on his right leg for a total of 4) to form a hand weapon. You will need to fold Stripmine's legs back to lock the port in place. 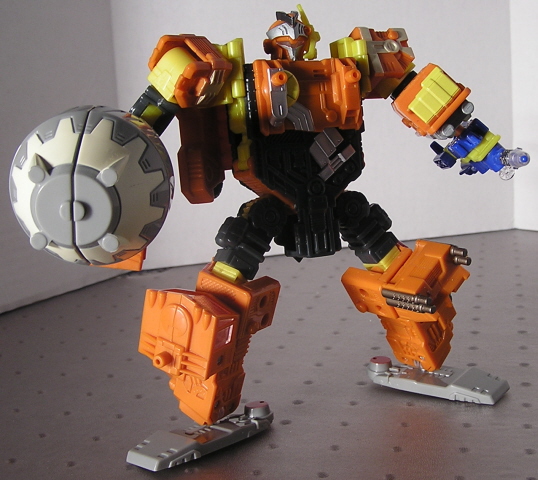 The only exception is the right arm, which suffers from kibble. It can be an exercise to figure out exactly the right way to get a certain position out of it, but it can be done. The hip joints are also set up differently. There is only one ratcheting direction for the hips, but the ratcheting device is hooked to a ball joint, so you can get some great leg poses. Again, it's just a matter of finding that right position. 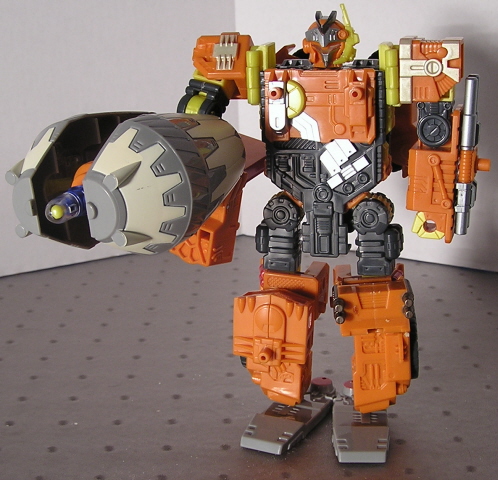 The Cyber Key works in the same way in Robot mode. Also, it looks funky, but you can also position his arm so that Stripmine can man the controls for the launcher. This is, by the way, an official transformation (as crazy as it seems). With Quickmix now hitting stores, Cyberton has seen it's last new and original figure. There will be more repaints trickling out before the line is officially over this fall. This figure is another fine example of overall how Transformers keeps raising the bar with each successive continuum. With Titanium now hitting shelves and Classics on the way this Christmas season, it may be awhile before we see a truly new figure line. Let's hope that whenever that new line does hit, it raises the bar even higher. 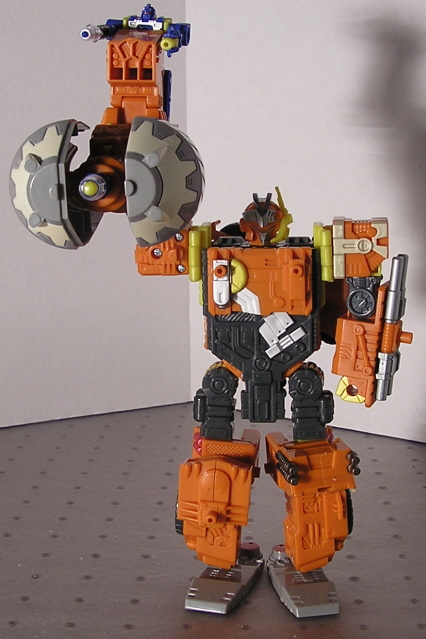