Iacon One's Exclusive is this, the Golden Disks and Transmetal Megaron's disk projector. I wasn't able to go myself, but I picked up this set on ebay. I've heard there were only 200 made, but it's also been said they're were only 100 sets itself, iono. Not very cheap, I have yet to see one run $150.

The packaging itself is a tube and has a cap at the top. To actually get them out without destroying the plastic piece they're in though isn't easy. The Tube says that this isn't for children and is an adult collectible. 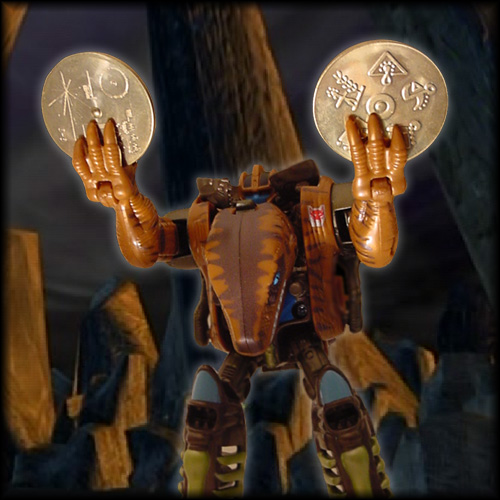 The Golden Disks are made out of a metal alloy. I'm not sure which, but i've read before it was brass. The disks themselves are 100% identical to the show. They are very detailed and are gold colored, obviously. They go in scale with just about any Transformer, the sad part is with the newer transformers is they can't hold them. The only newer ones I have that hold them are Cybertron Dark Scorponok and Universe Reptillion. 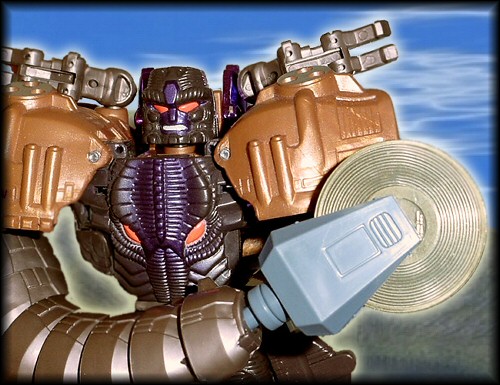 The projector piece is a neat little addition for those of you that have Transmetal Megatron, but for the others, it's really just an extra piece. It's fairly detailed, but there's just really not much there unless you have the toy it goes to. As for it being able to spin the disks, it does spin them decently. You do have to spin them yourselves.

Overall
This is a nifty little set and it helps set up for this year's Botcon, which i can't wait for. Unless you went to the convention and picked these up yourself, it won't come by cheaply. Ebay will cost you quite a bit. I love this set and is a definite for any Beast Wars fan, if you can afford it that is.