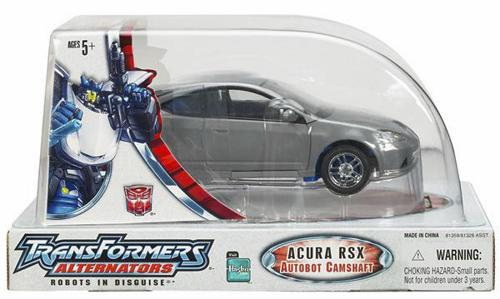 It would have been very easy for me to customize this figure to look like a junker. Out of the package the left bumper was pushed up like it had been rear-ended and held by coat hangers and duct tape. I love Alabama Chrome.

Camshaft is a monochromatic car. The body is grey, not silver like Grimlock or platinum like Silverstreak, grey. The entire interior is black. No paint on the dials or seats. The only color is in the headlights where the amber turn signal is, the tail lights, some blue in the trunk where his feet attach, and the license plate. Little Rhodie, the biggest little state in the union. The mold matches the Blue Prowl Version offered from Binaltech, so it’s only new to the U.S. The wheels are chrome instead of grey. 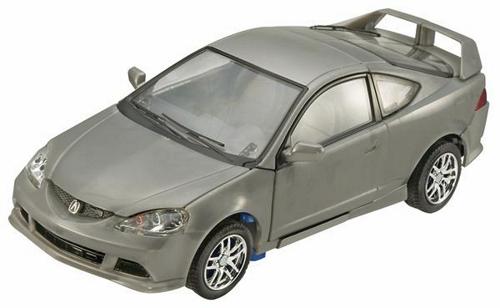 I prefer the finish of Grimlock. It was silvery and metallic. This looks more like primer that has been exposed too long. It’s better than a red car but not as good as silver. In terms of color matching, the painted parts match the molded pieces well, better than Swerve anyway. The side mirrors appear to be glued in differently compared to Prowl. I know some of you had the mirrors pop off, mine never did but it sounded like a problem for some. It appears that the point of attachment is thicker. The bumper was a mystery but not the only flaw I found out of the box. The hood had a nick in it where the excess plastic was being cut off and they cut too deep. Let me explain the bumper fiasco, while it wasn’t as bad as the Nemesis Prime coming soon at Hasbrotoyshop, it did need tools to repair. I popped the bumper off and looked down in the slot that allows the piece to move and found that the plastic hadn’t been cut out. I pull out my trusty nail file because my handy dandy x-acto is at home, I keep my Alternators at work so the wife doesn’t know when I get a new one and it keeps my nephews peanut butter fingers off too, and scrape out the excess. It works fine now, BUT the paint has rubbed off where the bumper was sticking out against the side of the packaging, how handy that this portion was hidden by the bubble art. All I need is a Reprolables.com sticker sheet and I could make it look like a before picture.

Camshaft’s robot mode is almost as plain as the vehicle mode. Blue is revealed on the thighs, hands, and helmet crest. The face is a yellowish gold and has lighter blue eyes. The shoulders should have blue and gold but they were painted backwards. Yes the back of the shoulder has a gold and silver check mark on a blue background. Aaargh! I could swap the hands and change the sides the arms were on if I didn’t want to lose articulation, it’s a double elbow but I’m still not willing. The only Autobot symbol is a little one on his left shin. The engine/gun is black with grey painted on the top for details. He has a blue energon night stick. 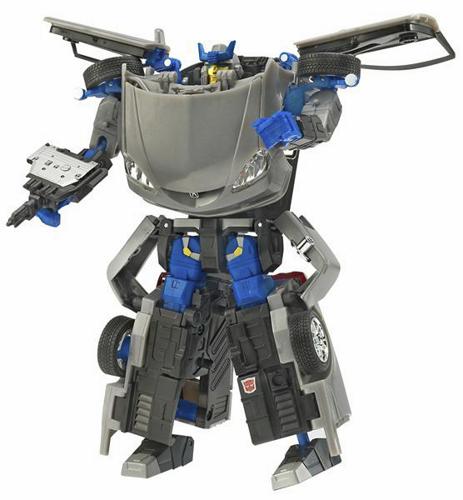 The overall design is unified and he really looks pretty good, like I said, at least he’s not red. I can’t figure out why he was called Camshaft. The G1 Camshaft was grey but otherwise they look nothing alike. He had a mouthplate and no crest. This figure more closely resembles Swindler. We can’t have Swindle and Swindler. The shoulder also match Bluestreak so it could been called that as well. My last gripe with this figure is the grill ornament. It just fell out. If I hadn’t seen it fall I would’ve lost it cause it’s so small. I need to glue it on cause Hasbro was too cheap to do so.

The quality is slipping for sure with this figure. If you can over look the shoulders it’s really a good figure, especially if you don’t want a police car. I think I’ll send this one back and see if the replacement is as poor.