With the 2nd wave of 6" transformable Titanium figures comes 2 figures. One Autobot, one Decepticon, just as in the 1st wave. This review is for the Decepticon Thundercracker. He was hand-picked by Megatron to join the coveted "seeker" unit headed by Starscream, in part for his sonic boom capabilities. 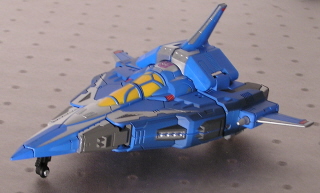 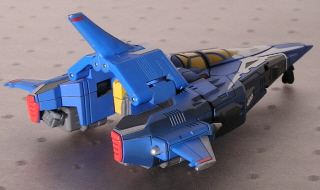 Thundercracker's alt mode is yet another interpretation of the Delta Wing jet. I find it a very sleek and elegant design, albeit not my favorite interpretation. From the front, it looks as if the kibble factor is non-existent. The design does an excellent job of making the legs seamlessly intergrate into the body. However, if you flip to the back there is a gaping hole in which you can clearly see both arms and head. This is extremely unfortunate, as it takes away from an otherwise great design. 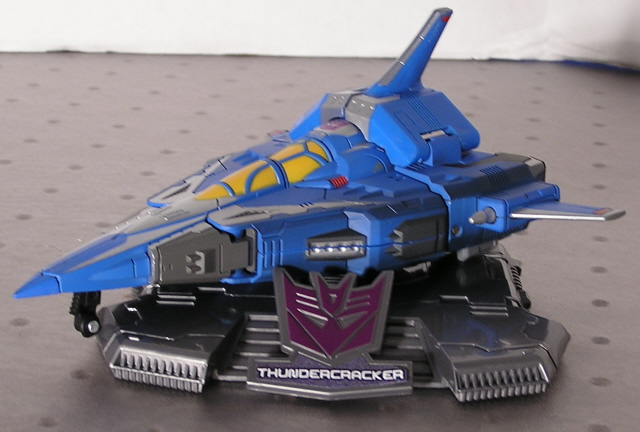 Thundercracker, like the other 6" figures, is provided with his own base. He has 3 wheels, with the front landing gear being retractable. His transformation is almost exactly like Cybertron Starscream. The only difference is that the nosecone folds up flat against his backside. 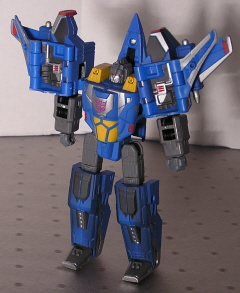 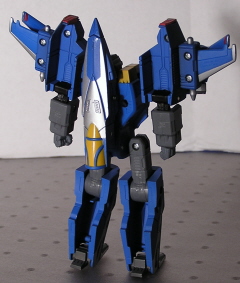 His robot mode is a very nice design. He has his trademark blue and yellow color scheme intact. However, his head is more of a gray than the traditional black. He also has some designs on either side of his mouth, which give him a more veteran look. Quality control seemed to have been alert when this mold was made. All the joints held exceptionally well and the paint was done pretty well. 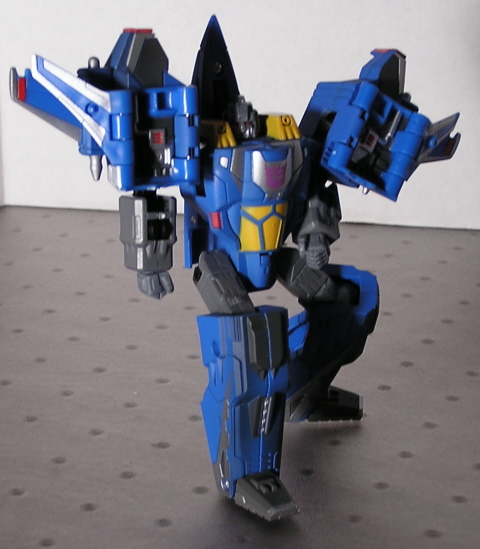 If there is one fault to this mode, it's in the shoulders. There is vertical jointing, but very little horizontal jointing on the shoulders. Arm poseability suffers slightly for this. However, the legs have very good jointing. If they had found a way to reduce the gaping hold in the rear of his alt mode and given his shoulders a little better movement, this would be a first class figure. However, as with the other 6" Titanium figures, there is something lacking. It's a crying shame, really.