While Scourge was a Unicron cronie back in G1, lately Scourge has taken on a different role. Mainly, he has become Optimus Prime's evil side in most cases. Also known as Nemesis Prime in some of the other lines, Scourge has been the polar opposite of Prime made to confront and destroy Prime. However, Scourge had a different role this time. He is now a rogue Prime that defected to the Jungle Planet and proceeded to overrule it. However, his fighting with the Autobots and subsequent abandon into deep space has altered his form and made him a very cold being in more ways than one. 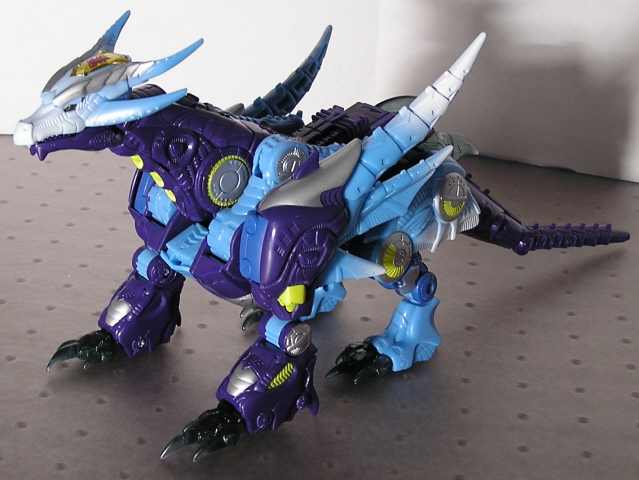 Scourge's alt mode is a dragon beast. While essentially the same as his original mold, the repaint has brought this figure to a whole new level. Instead of orange, red and black coloring, he is now mostly shades of blue and purple with clear grey accents. The clear plastic is most evident on his claws, which creates an awesome effect. The coloring looks excellent on this figure, dare I say better than the original. There is still the button behind his neck that, when pushed, cause him to roar and his eyes to glow. Not bad for an electronic nuisance. 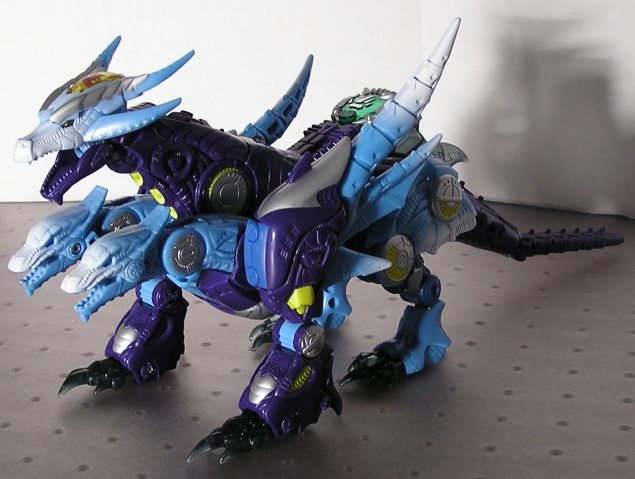 His Cyber Key is still from the Jungle planet, but has lost the gold outlining. Insert the key in his back and 2 more heads flip out, one on each side; accompanied by the transforming sound effect. CryoScourge looks very nice in this mode, but the heads tend to stick while flipping forward at times. His transform sequence is pretty basic stuff. Just remember to remove his tail first. 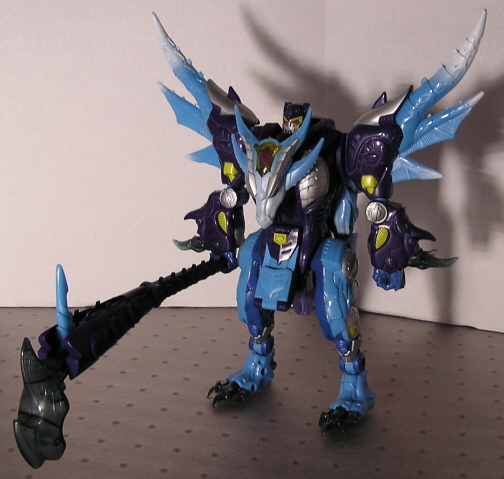 His robot mode is still impressive as well. The new colors again almost hex you into thinking this is somehow a remolded figure, but it's not. The face in particular has had major changes. It is gray with red eyes and a yellow outline, with the cranial unit being purple. His tail still forms an axe. The axe remains the same, except that the head of the axe is the same gray clear plastic. Scourge is well balanced had has some decent poseability overall. 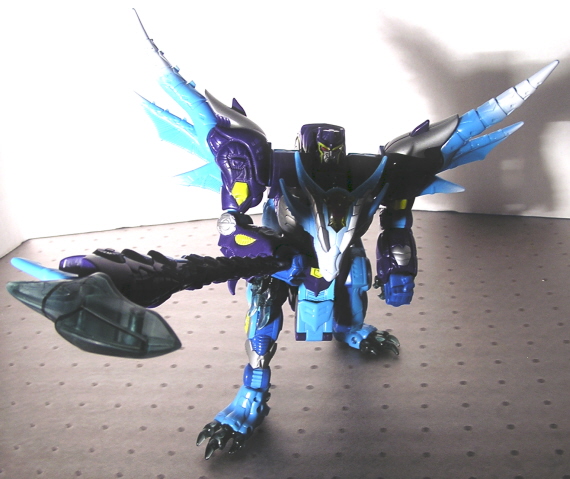 His Cyber Key function works exactly the same in robot mode, accompanied by the same sound effects. Also, if you push the button on the back, he still roars. Except now the yellow piece on his dragon headed chest also glows. This new recolor is one of the few recolors in the line that has impressed me. This adds a great value to an already steller figure.