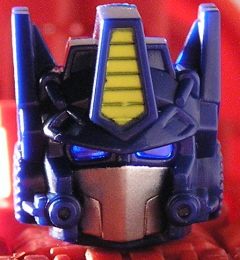 "No sacrifice is too great in the service of freedom"

Since the days of G1, there has nothing in the Transformers universe that has captured quite exactly what the original release was about. Beast Wars was a complete different tangent, RiD made a partial attempt to return to the G1 mold, but only for the Autobot standpoint. Armada, Energon and Cybertron also captured some of the essence (especially with G1-inspired repaints and originals), but due to the gimmicks and the softened character bios, it carried it's own ambience. However, Hasbro has saw fit to give us something remarkably close to G1 albeit updated. Which brings us back to Optimus Prime. Since Classics is touting itself to be G1-inspired, what better mode for Prime to have then a COE (cab over engine) alt mode. 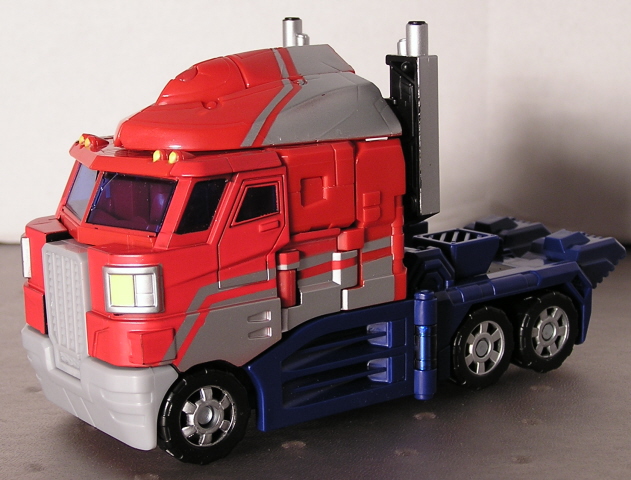 Prime's alt mode is updated a bit from the stodgy 1980's Freightliner COE design. The Classics design reminds me of a Volvo design. His colors are genuine Prime. His cab is mostly red with some silver accents, his bumper is all silver, and his bottomside is mostly blue. It's a very clean design, with details including cab doors, a semi-detailed cockpit with seats/steering wheel, eggcrate grill and the wind splitter (or wind vane as it's called in the instruction book). There are exhaust stacks on either end of the back. They look too square to be totally believeable, but add to the aesthetics good enough. Two things are off with the design. There are alot of gaps in the bodywork for the arm transformation which clutters the side profile a bit. The other concern is with the headlights. If this were to scale, I would think Prime would be lighting the roofs of cars before lighting the road. 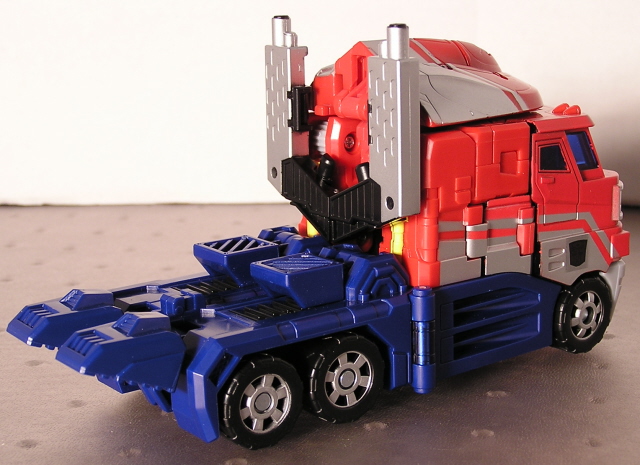 There are other nice touches to this figure as well. One very nice throwback is that the rubsigns have returned! For Prime, there is one located below the passenger door. At least on the figure I have it is. The box art shows the rubsign behind the cab door. Perhaps they're placed random... or mine is in the wrong spot... or the box art is wrong. Only Primus knows for certain. For those that are dying to know, unfortunately there seems to be no fifth wheel or hitch for a trailer on the back end. His transformation is slighly complex, but easy to master. The instructions are confusing for the arms, but you can pretty much figure that out on your own. 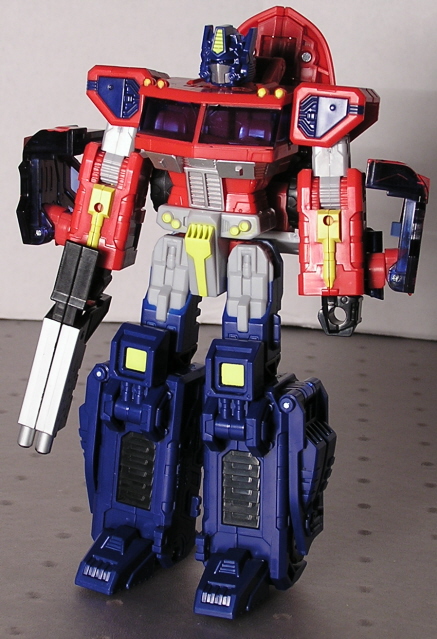 Prime's robot mode is extremely well done. Some have compared this Prime to a shellformer, but the front fenders (which is the only shelled part) fold up pretty neat behind the forearms so the overall effect of the 'shell' is pretty moot. Yellow shows up in the robot mode on the forearms, pelvis and knees. The G1 Prime look is pretty well intact. It reminds me of the Powermaster head that Prime had. The head sculpt is well done. The eyes have blue piping ability. 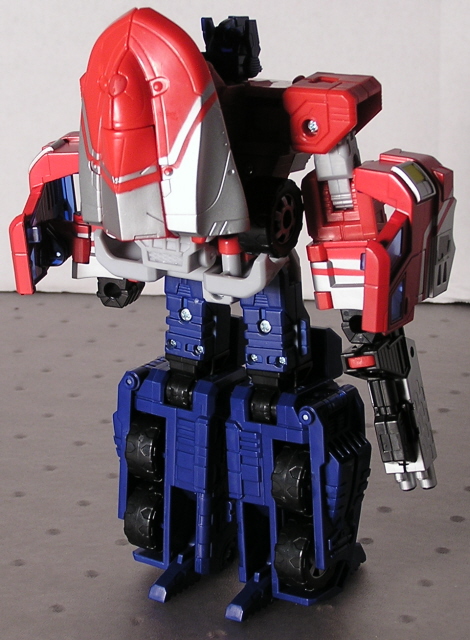 Prime's poseability is excellent. His feet have rearward movement. His knees have full bending ability without use of ball joints or ratchets plus they have horizontal movement. Same for the hips, waist and shoulders. The elbows are ratcheted with 4 positions. The head can be moved horizontally but not vertically. The best part of all this is that (as far as the figure in hand is concerned) the joints are all tight. No slop whatsoever! 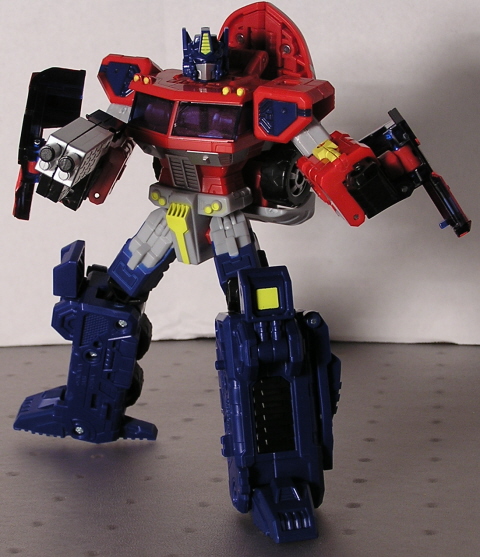 Prime's smokestacks fold up on each other and create a double barrelled laser blaster for Prime to hold. There are also photos of Prime holding each stack seperately as a single barrel weapon. I couldn't replicate the look, and it's not an official look, but if anyone can show how to do it I'm all ears. However, Prime is offensively powered to the hilt. We're talking more than the ionic blaster here. 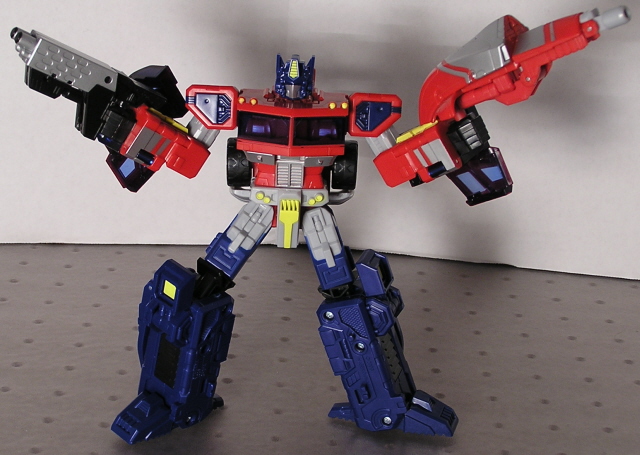 The wind vane is normally worn on Prime's back. However, it can be removed and easily transformed into an enormous ion blaster. This blaster can be weilded in either hand. Combined with the laser blaster, this gives Prime 2-handed offensive capability. 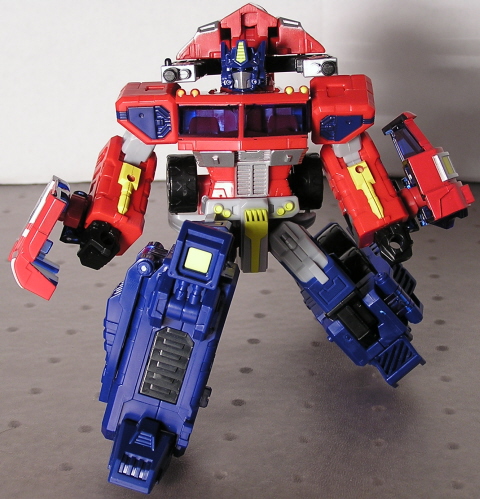 If that weapon combo wasn't enough, you can also mount the smokestacks onto the wind vane and use them as shoulder blasters. Therefore, you have a multitude of weapons options. The Optimus Prime molds that have came out recently have been nothing short of fantastic. Classics Optimus Prime keeps that track record going strong.