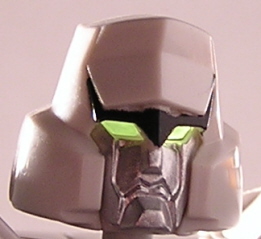 "Lesser creatures are the playthings of my will"

Megatron's G1 form was that of a Walther P38 U.N.C.L.E. That was the only time he had the alt form of a hand weapon. Since then, he has been everything from a tank to a dinosaur to a space jet. With the Classics line, Megatron has finally returned to his original alt form type. However, the stealthness of this new alt mode isn't quite Walther P38. 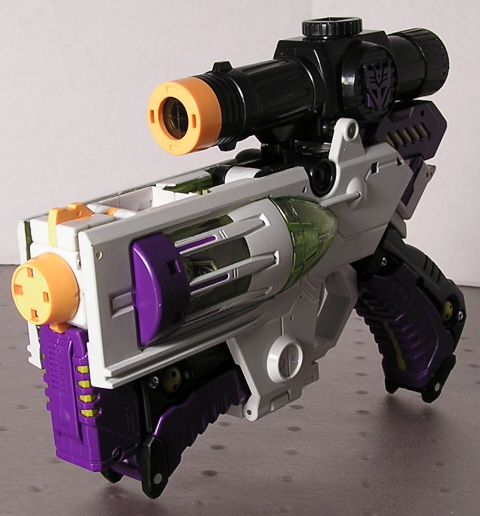 While once again being a handgun, Megatron's new alt form is pretty outlandish. Blame it on US Federal regulations which states that a toy gun must resemble nothing of a real gun. Hence, this is why you have such details as the orange cap where the muzzle is and the green/purple accents. On the whole, the gun looks pretty decent. Alot of the G1 accents are intergrated in, such as the bullet chamber, the hammer and trigger. The gun fits nicely into your hand and the trigger can be squeezed. Don't expect anything, the trigger just clicks. At least there's no electronic noises to drive one mad, but in the end you also wonder why they aren't there. Another thing that seems to be missing are rubsigns! There is a big Decepticon symbol on his scope, but no rubsigns to be found. 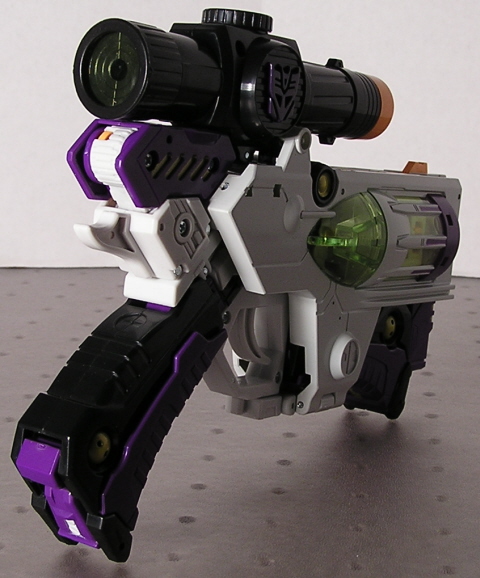 The scope also works. However, your actual target may get blocked out. Right where the crosshairs meet, there is a big blur. It defeats the purpose of a scope when you can't zero your target. The transformation is misleading. You can see his legs in alt mode, but they disguise the legs well IMO. The first part of transformation consists of lifting the sides of the gun up to expose the 'wings'. One look under the wings and you'll think it's a complicated mess. However, I was able to transform him effortlessly without even looking at the instructions. My suggestion is to NOT look at them, they'll only confuse you more. 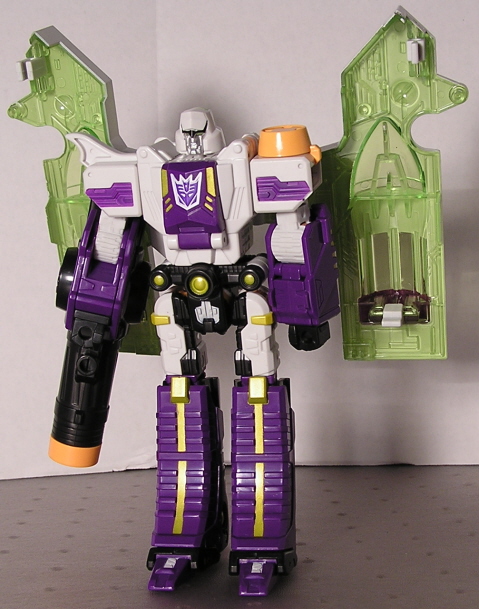 Megatron's robot mode is very clean looking. The purple dominates over the white here. I would have preferred to see grey or black, but that's just me. Some gold also shows up on the pelvis and chest. True to his G1 roots, the scope becomes his Anti-Proton Pulse Cannon. The wings are a nice touch and add to his malevolency. Only bad part about the wings is that you can't put his right arm straight down due to the scope. 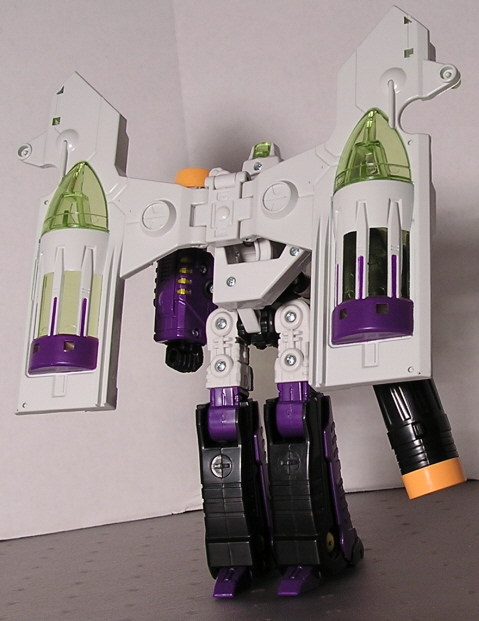 Poseability is mixed. The joints are all set up. The knees are 5pt ratchets with free horizontal movement. The hips have pseudo-ratcheting joints for fore and aft movement, plus full ratcheting joints for extending movement. Shoulders are elbows are both ratcheting. The waist is stationairy. His head has a full range of horizontal and vertical movements. He even has a neck, as skinny as it is. The head sculpt is very G1 inspired. However, the paint above the eyes makes him look like Gene Simmon's brother. He does have light piping for his eyes, which is green. A bummer they didn't do purple. 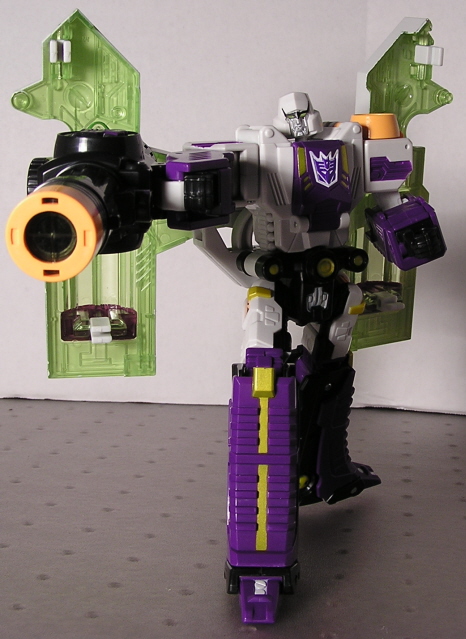 Back to the poseability. As I mentioned, it's mixed. The joints are all set up, but due to the wings his balance is off. If stood straight up, he has a tendency to lean back and ultimately fall flat on his back. You have to bend him forward slightly so he'll stay standing. There are alot of little niggles with this figure, but overall Megatron is done justice with this latest mold. Certainly better than being a racecar. It's just a matter of time before fans whip out the paint and make Megatron look as he should.