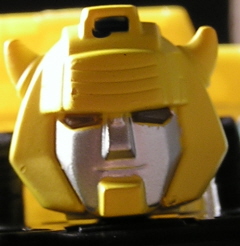 Bumblebee has been one of those oddities throughout the TF universe. A popular character on the G1 animated series, he up and vanished afterwards and has not had one figure since. This now changes with the Classics line, as Bumblebee makes a long awaited return into the universe.

Bumblebee assumes the alt form of a subcompact car, which is perfect since his original G1 form was a Volkswagen Type I "Beetle". If anything, this car resembles the current release Mini Cooper. His color is, appropriately, mainly yellow. He also has some white comp stripes running across the hood and roof. His rear end is washed in all white. There are nice details to be had, including the billet grille, air intake scoops on the hood, door sills and roof, the hatch mounted rear spoiler and the Recaro-style seats. Unfortunately, the seats are the only interior touch. There is no dashboard to speak of, not even a steering wheel. As for the roof, you will find a rubsign placed there. The one for my figure wasn't so lovingly placed, as it it already coming loose. Another QC complaint is with the paint app on the roof. It wasn't very clean at all around the edges.

The rear end comes off looking rather bland. There are some mold lines running across the trunkline, but the white pretty well washes that out. You can also clearly see his robot mode head thru the backglass. It's not much of a major point, as Bee has a 'Wave Crusher' waterjet ski with trailer to hook up to his tow hitch. I'll focus more on the Wave Crusher later. One other thing to note concerning his alt mode. Bee is pretty well slammed to the ground, so there's VERY little wheel clearance. If you wish to roll him around, do so on a smooth flat surface. His transformation is more complex than one would think, but pretty simple overall. 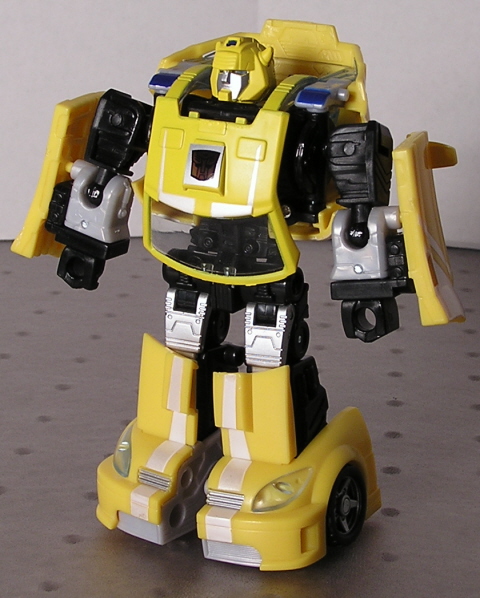 Bumblebee's robot mode is a great update to his G1 look. Since the front end of the alt mode forms his feet, it's understandable why the wheel clearance was so low. Alot more black shows up in robot form, mainly in the limbs. His face is another spot on G1 likeness. He even has his trademark smile on him. However, the QC in the paint department was lacking as they have overspray on his forehead. The face also was painted pretty sloppy. The Voyager class models seemed to have good QC and it gave me hope that maybe the entire Classics line would have uniform great quality. I got my hopes up too soon. 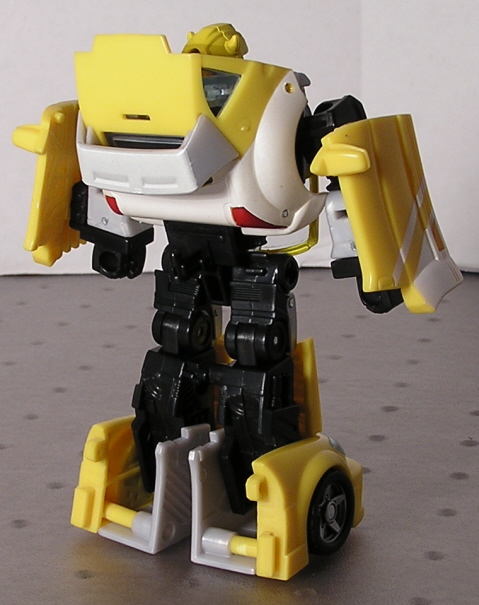 The seats mentioned in the alt mode form thigh guards in robot mode. Although the doors rest on Bee's forearms, there are pegs in place to hold them in position. Let's take a look at Bee's Wave Crusher at this point. 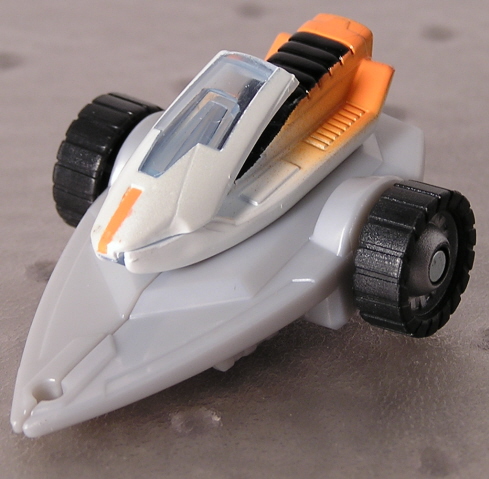 Bumblebee has no hand weapon, but he does have his waterjet ski. The jetski and trailer are one piece, the ski does not come off. The ski itself is nicely detailed. It's white and fades to an orange in the rear with a black seat. The hitch point is part of the trailer. Mainly, it's a hole which fits into the hitch post on Bee's rear end. This ski serves another purpose.

Transformed, it becomes a jet pack for Bumblebee. The fitment is easy, it simply slides onto Bee's back and clips to a point on his backside. Being that Bumblebee is a spy, this gives his the ability to explore land, sea and air. 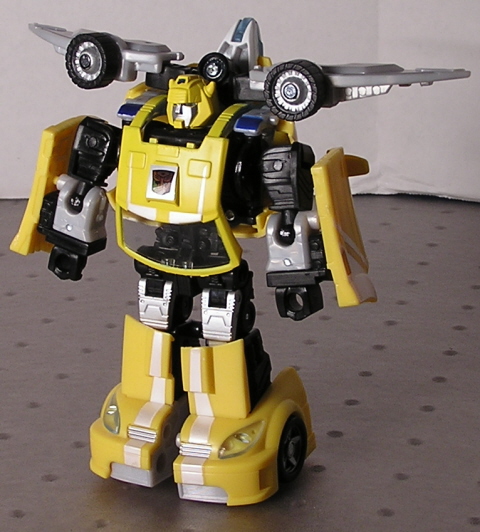 Despite having wheels on his feet, Bumblebee has very good poseability. His feet have backwards movement, and all his joints are non-ratcheting. A plus is that the joints seem to be nice and tight so he can hold some good poses. Another thing that helps is that he is weight balanced, even with his alt mode rear end hanging off his back. Having the jet pack on doesn't effect balance, which is great. The only limitations in movement is that he has a fixed waist and his head only has horizontal movement. 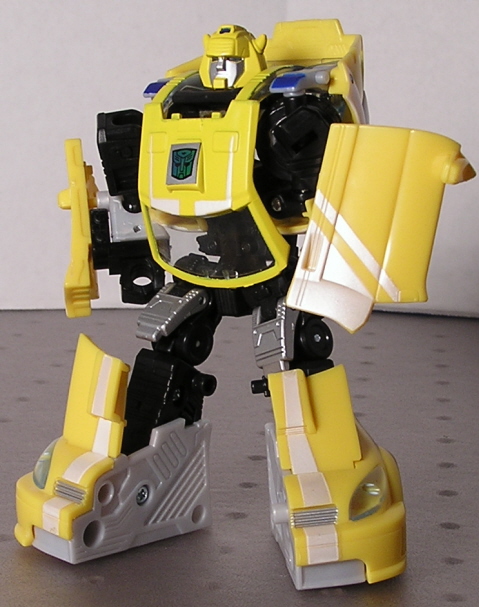 One final note. He has some great range in his arms, but if you move them inward or outward, the alt mode wheels will pop his head upwards a bit. However, it doesn't ruin the aesthetics any. It's been almost 20yrs since Bumblebee has last been seen hanging off a retail store peg. His return is all too fitting and this figure is definitely worth adding to the collection.