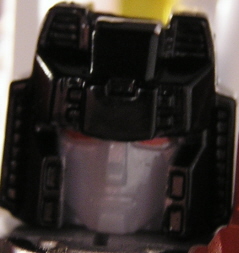 Starscream has been one of those characters who has had the fortune to be both popular and enduring. A regular in the TF universe lineup, he has always remained a jet. The Classics lineup sees Starscream reprising his role as a modern day military jet, as is normally the case with him

Starscream's alt form very closely resembles his G1 look. He is mainly white with red accents on his wings and some blue trim here and there. He also has his missiles on either side of his wings, in which the missiles are launchable. The detailing is very nice, with the rear turbines, steel plating details and wing details. However, they forgot one detail: LANDING GEAR! The rear wheels are molded to the belly of the plane, and there are molded wheels towards the front, but the nosecone wheel is absent. It makes it feel lacking in a way.

Another area that is lacking is the belly area, where there is a huge empty cavity. This is for the cockpit while in robot mode, but it does take away from the look a bit. Starscream does have one rubsign on his left wing. Would have been nice to have one on each wing, but I guess most figures only get one, if any at all (See Classics Megatron for a rubsign omission). While his transformation looks to be G1 accurate, there are a couple of twists to it. However, you can figure it out pretty easy. 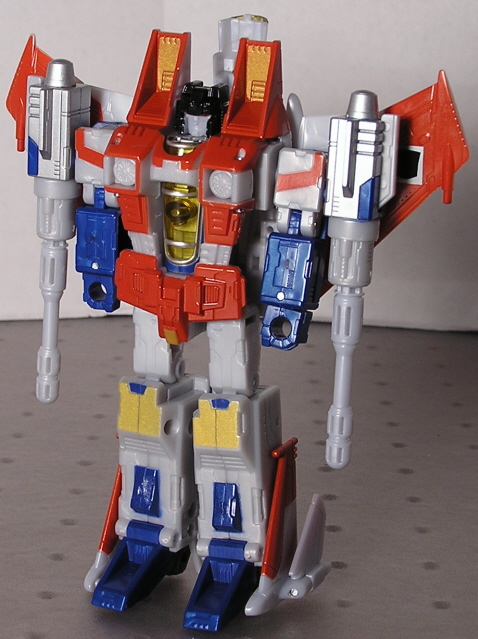 His robot mode comes off looking pretty nice for the most part. Some pics made him look somewhat chunky. However, in person he's pretty proportionate. Yellow shows up in his color scheme in this mode. The tailwings fold up nicely by his feet. The 'landing wheels' for his front half form his turbines that are on either side of his chest. His nosecone hangs off of his back. 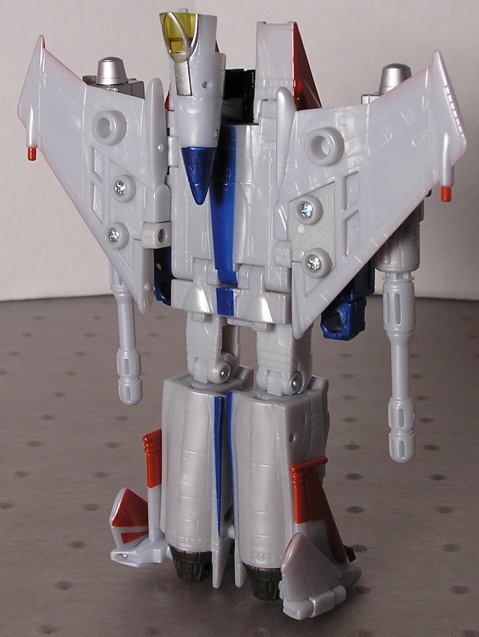 The missile launchers peg towards the shoulders. Between the size of the missiles and the launcher itself, they look huge for the figure with the missiles hanging down just below his knees. His face is somewhat disappointing. He has red eyes, which are not piped, but besides his black cranial chamber the head is largely unpainted. The QC on this figure looks to be of good caliber. 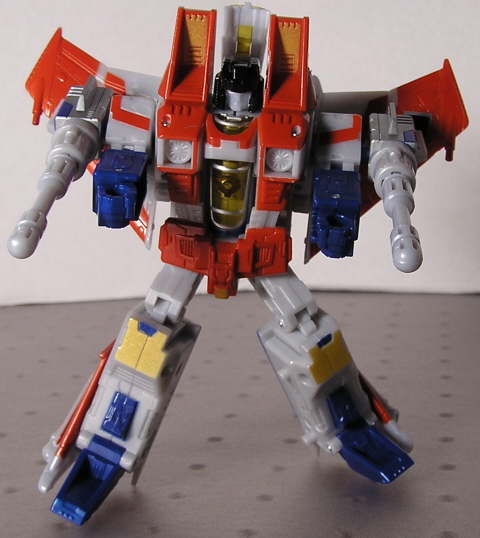 If there is any major complaint about Starscream, it's in his posing. While the hips and shoulders have good movement and the knees have free horizontal movement, the actual knee and elbow joints only offer 3 positions. Also, due to the nosecone hanging off from the head, the head is stationary. Finally, due to the bulk of the launchers, moving the arms around will require folding the wings back a bit. I had alot of hope that Starscream would get a good treatment for Classics. However, mainly due to the lack of good posing ability, I am left thinking they could have put more effort into him.