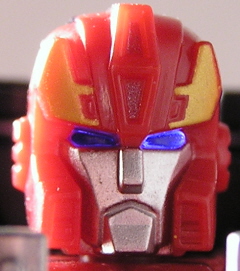 "Action is my middle name"

Hot Rod... ahem... Rodimus was introduced back in the original TFTM and eventually became the Autobot commander for a short (and disasterous) time before reverting back to Hot Rod. He has also been a Targetmaster. He has taken a double life of sorts lately. Some compare Hot Shot to Hot Rod's original persona. Energon also brought out Rodimus, who had a Hot Rod'esque treatment. Since Hasbro no longer has the rights for the name Hot Rod, for the classics line we see what we think of as Hot Rod being named Rodimus.

Rodimus has an alt mode of which could best be described as a frankenstein's concept car. The primary paint is red with yellow flame decals on the side doors and hood. The hood also has the legendary exposed engine and side exhaust pipes. The engine itself has great detail to it. The vehicle as a whole is a good interpretation of the original G1 mold. I tend to think that the animated series alt mode was the best with the rounded rear end.

The rear end features the flamboyant rear spoiler. Were it not for Rodimus' missile launcher mounting in the middle of the rear end floorplan, there would be a huge and ugly gap sitting there. The launcher comes with a missile, which is blue and molded like Cybertron Crosswise's missile. He sports a rubsign on his roof. 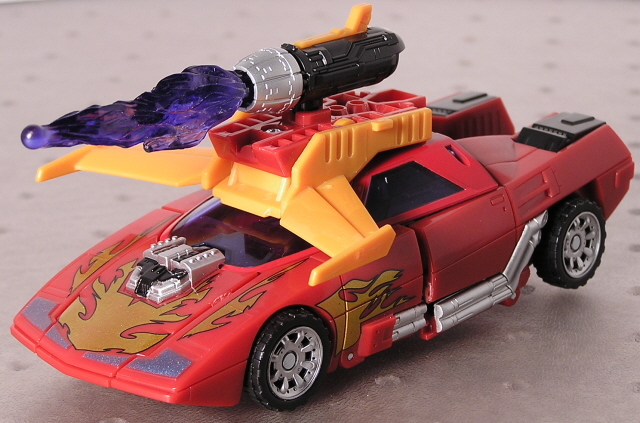 Rodimus features an Attack mode in alt mode. Flip up the rear end and the launcher becomes exposed. It looks absolutely silly, as the rear and is now something ony Kup could relate to. The transformation is a little involved but not difficult. One thing to note: The feet can be stuck in their resting well pretty tight, they might need some careful coaxing to pop out of their nest. 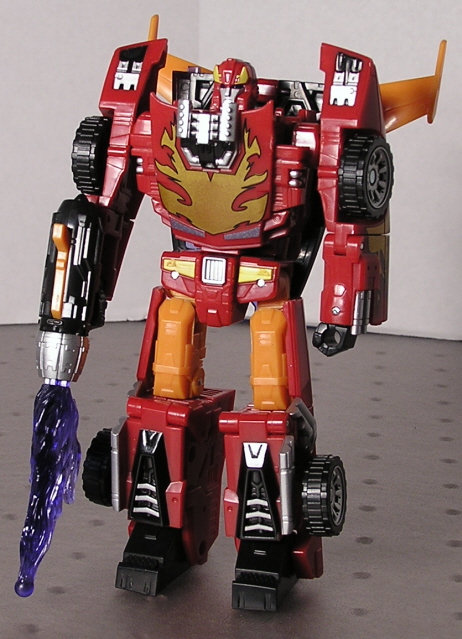 His robot mode is pretty true to his G1 roots. Some orange shows up in the thighs. However, his face is pretty lacking. There is hardly any expression there, which is kind of creepy. The eyes do have blue piping ability, which gives some expression back. Besides that, his overall look is pretty nice. 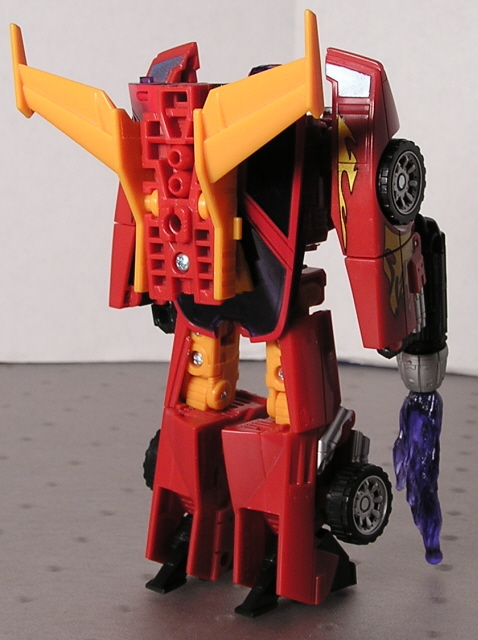 The missile launcher fits in either hand. His left hand features a datacom communicator that flips out. Looks like nothing more than a black pod of some sort. Due to his transformation, his rubsign is hidden from view in robot mode. 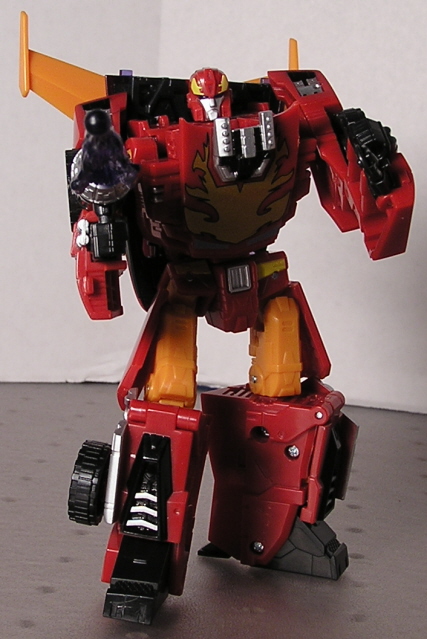 Posing this figure is a mixed bag. The legs have good movement with no ratchets. The hips don't extend outward too far. The waist is fixed. The elbows have good movement but the shoulders only have rotating movement. There is no extending joint for the shoulders. The head has horizontal movement, but nothing vertical. Rodimus is a nice figure with some strange features. However, I think he does the G1 Hot Rod mold some good credit.