Seems that the frequency of new Titanium 6" figures is about one from each faction every month. For October, there are again 2 figures. This review is for G1 Scourge. In that continuum, Scourge was part of the Unicrons. His function was a tracker and he led a cloned army called the Sweeps. Although proficient in tracking, he didn't show many other favorable traits. 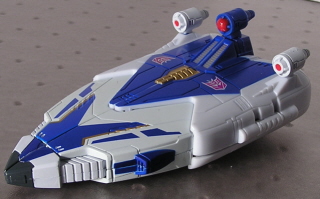 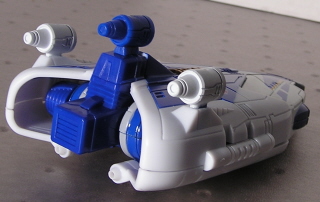 His alt mode is a space hovercraft. While not completely accurate to the G1 design, it is still very well executed. What I find curious is that his is predominately white with blue and gold accents. Scourge was more of a purplish color back in the G1 days. The gold accents also threw me off. Don't get me wrong, the colors go very well together and make for a nice craft... I just can't see this being a Decepticon color scheme. The front end is die cast while the rear end is mostly plastic and rubber. He has a Decepticon emblem on each wing. The rubber shows on the 3 engines.

Scourge's base resembles the other Titanium figures. One thing that Scourge is lacking is landing gear. Being a hovercraft, I suppose none is needed. Nonetheless, make sure you take care to display him gently as there is nothing to prevent the bottom of the figure from being scraped up. Transforming him is almost absurdly easy. 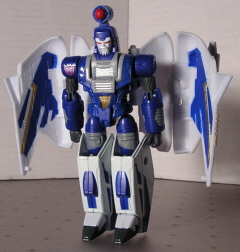 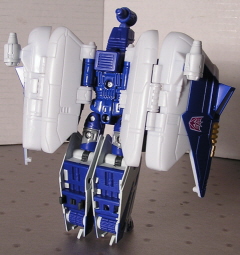 His robot mode is, for the most part, also closely resembling the G1 design. Gray now shows up, mostly in the upper limbs, hands and chest area. He also sports a Decepticon emblem on his right shoulder. The face is done rather well. Although mostly white, they took the time to paint silver on his 'mustache'. Sadly, his hands are balled up in a fist so there's no way to know if his nails are present. 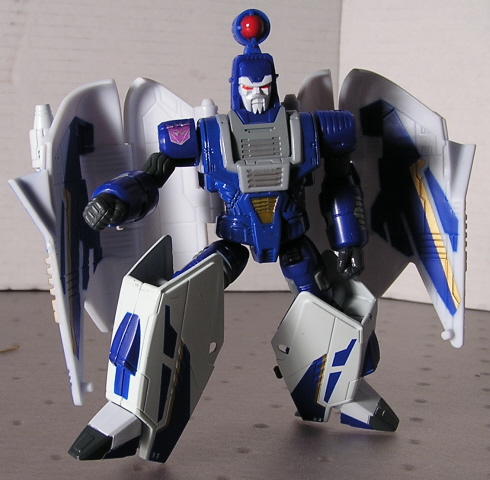 If this figure has any serious lacking, it's in the posing. The head has no joints whatsoever. The feet and knees have great range, but the hip design is one where you can only utilize one direction at a time. If you want to go fore/aft instead of side to side, you have to rotate the hip joint 90 degrees. How annoying. And while his shoulders have great range, the elbows have either a straight or 45 degree bend. That's it. Once you can find a pose you like, the joints hold up very well. Hopefully, this means the joint issues that plagued the charter figures has been solved. One thing that hasn't been solved is the twistie tie complex. There were no less than 10 of them holding this figure down. While the joints have good hold for posing, they easily popped off while trying to undue those packaging snakes. My whole right side of the figure came loose during the process. While a great figure to look at, the posing limitations and the lack of a weapon of any type ultimately hurt this figure's rating.