By 1986, the Transformers had been on the market and on TV airwaves for 2+ years. New product with a whole new look was soon arriving and what better way to shift from old to new than with a full length feature film? In August of 1986, Transformers the Movie was released in theatres. Shortly thereafter, it was released on VHS cassette. Rhino later acquired rights to convert the film into DVD and released a Special Collector's Edition in 2000. Now, 20yrs after the initial theatre release, the movie will be soon available, remastered, in a 2DVD set from Sony/BMG. I was fortunate enough to be given an advance copy to preview. 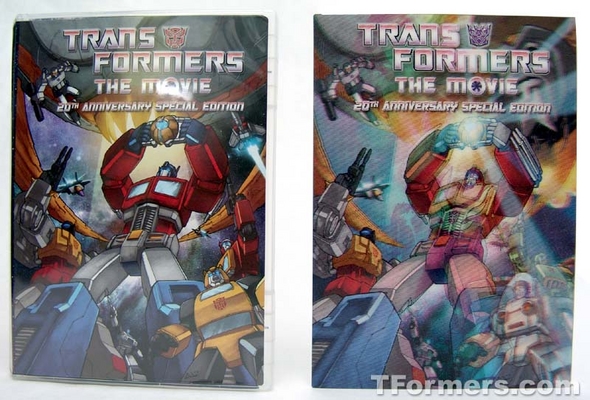 The movie takes place in 2005 and portrays a pivotal point in the Autobot/Decepticon war. Early on in the film, several popular Autobot characters actually meet their death. This was something never attempted on the TV series. One of the characters was Optimus Prime, his death being a very emotional (at the time) death scene which resulted in outrage and hate mail. While Megatron didn't technically die, he was granted a new body by the planet destroyer Unicron and renamed Galvatron. His mission was to find and destroy a new gimmick to the TF line, the matrix of leadership, which Optimus Prime passed on to Ultra Magnus. After the Autobots are chased from earth by the Decepticons, the story arcs into 2 different subplots. These subplots then merge back in towars the end as Unicron transforms into an enormous robot and attempts to lay waste to Cybertron in the climactic scene.

The movie met some resistence when first released. After all, they did kill off Optimus Prime as well as several other fan favorites. The use of 2 expletives (1 S-bomb and "damn", which some consider vulgar) also got some grumblings from parents. There were also animation errors that took away from the movie (Insecticons still fighting even though they were reformatted for example). However, it is almost impossible to go between Season 2 and Season 3 of the TV series without watching the movie. OK, enough about the movie. Chances are most of the masses that frequent this site have seen it. You're probably more interested in the content of the DVD Set, so let's get to it. 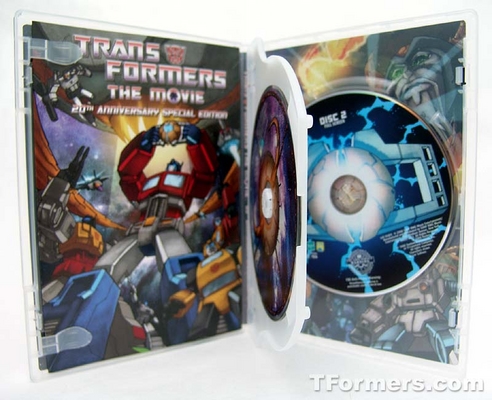 The DVD set contains 2 DVDs. DVD1 contains a never before released 16:9 widescreen edition. DVD2 contains the standard 4:3 edition. The cover features the artwork of fan favorite Don Figeuroa. Contrary to what has been said, the cover itself is not lenticular (3D). Instead, there is a lenticular card that comes with the DVD Set that sadly does not fit in the cover properly. This lenticular card shows the old guard Transformers changing into the new guard, respectively. On the forefront is Optimus Prime holding the Matrix, which when turned shows Rodimus Prime holding it. The back of the DVD cover summarizes the movie with some screen shots and lists the contents of the 2 DVDs. The listings mention Easter Eggs. In fact, there are hidden features within the DVDs but I am sworn to secrecy. You'll have to find them. While the Rhino DVD release had the charm of having the original movie artwork on it's cover, the packaging for the 20th Anniv. edition comes out looking great without being too cluttered. 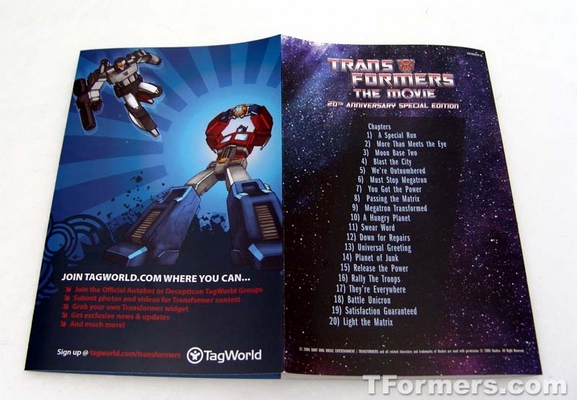 The first DVD features the movie in 16:9 Widescreen. The bonus features are plentiful on this disc. Perhaps the best feature is the Autobot Matrix of Knowledge. This option is similar to a Director's Cut, where various facts and trivia appear throughout the movie. The comments appear randomly and in various spots. They were done pretty well for the most part, although I did observe one small error. See if you can find it. Also, should you choose to view this option, wait for the end credits as there is one last blurb right at the end. However, this isn't the only way to view commentary. You can also choose to activate celebrity commentary. Flint Dille (editor/writer), Susan Blu (voiceover for Arcee) and Nelson Shin (Director) provide various commentary. Or, you can opt for the fan commentary. Other features include the Scramble City episode, never released in the US. However, the featurette is mostly commentary which was disappointing. You can also view original film teaser. There are also photo galleries, a side-by-side comparison of the original DVD release versus the remastered version and, finally, a featurette of the upcoming live-action movie set for 2007. Don't get your hopes up though, there is VERY little shown concerning TF design. 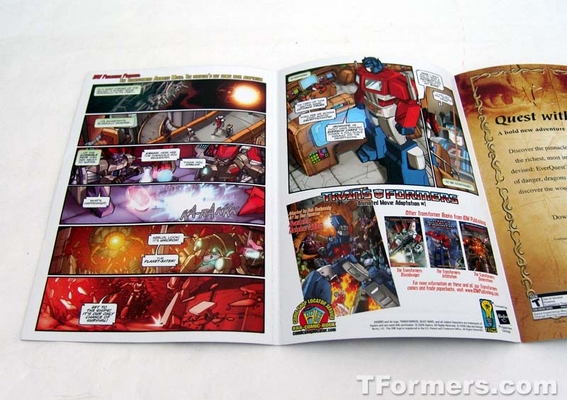 The second DVD features the movie in the standard 4:3 format. There are also interviews featuring Dille, Blu, Shin and producers Tom Griffin and Joe Bacal. These interviews feature the subjects about Prime's death, cast and character reminiscence and Q&A trivia. US figure and Japanese figure commercials are on this DVD as well as an outtake and deleted scenes section. Another feature is for animated storyboards. Finally, if you access the DVD from your computer there is a trivia game that is playable.

The PC exclusive material will autoplay a menu once loaded. You have 2 options. One is for DVD exclusive web content. Being that the movie isn't officially released yet, the website didn't look to be ready. Therefore, I can't make any comment about it. You can also play the "Secure Autobot City" game. I won't spoil the method, but it's a trivia game where you answer pretty simple movie related questions.

Comparing this to the Rhino release, you certainly get a lot more bang for your buck. The bonus material is definitely worth a gander and the interviews are interesting. The remastering of the movie brings out more color, although there were some parts that I thought were overmastered, especially some of the Earth scenes. For those who don't own the animated movie yet (or even if you do), this is definitely worth your hard earned money if you consider yourself a G1 fan! Look for it's release at your favorite retailer on Tuesday, November 7th. Retail is set at $22.