Helloo everyone. Today, I'm going to review about Classics Astrotrain. As most of you might know, the G1 Astrotrain was the first triple changer in the Transformers line, yeah you heard me right, the first triple changer! How cool is that! Now, Hasbro has made a new line of transformers toys, Transformers Classics! The Classics line is based on G1 characters and toys, being updated into much better toys. Lets not get too wrapped up about the Classics line.

Now about Astrotrain, he has three modes, that's why he's called a triple changer. Astrotrain has two alternate modes, a train mode and a shuttle mode. He of course also has a robot mode.

The train mode has a sleek desing on the front, but he looks like scrapmetal on the back. His rifle is able to attach at the back of his train mode on the top. Now, his robot mode. The same colors remain. Astrotrain looks better than his G1 counterpart. The G1 astrotrain has short hands while the Classics Astrotrain has a normal sized hand. While being better than his G1 counterpart, there still are things that don't make this toy so great such as the fact that his colors from the show is different and his train mode looks like scrap on the back.

I would recommend the collectors and those who like Astrotrain to buy this guy, otherwise, I recommend you to think twice before buying it. 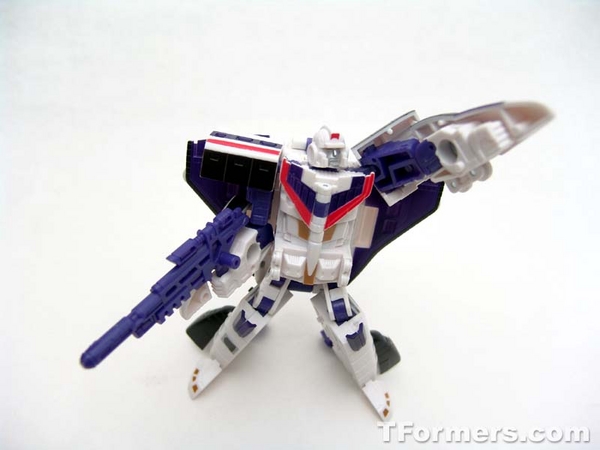