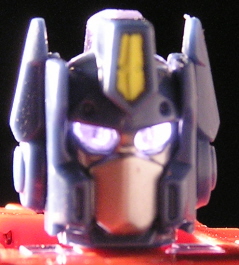 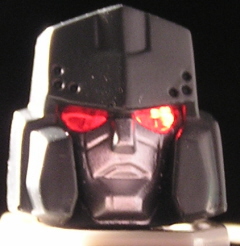 Lately in the Transformers universe, there has been at least two constants. One, there has been both an Optimus Prime and a Megatron. Two, both characters had been redone at least once in the line's life (several times in the Cybertron series). Classics keeps that role going by giving us deluxe class versions of both Optimus Prime and Megatron. However, Classics has split from past duplications. With this 2 pack, we don't get a recolor or a rehash of a previous line. These deluxe editions are entirely new. Let's take a look at Optimus Prime first. 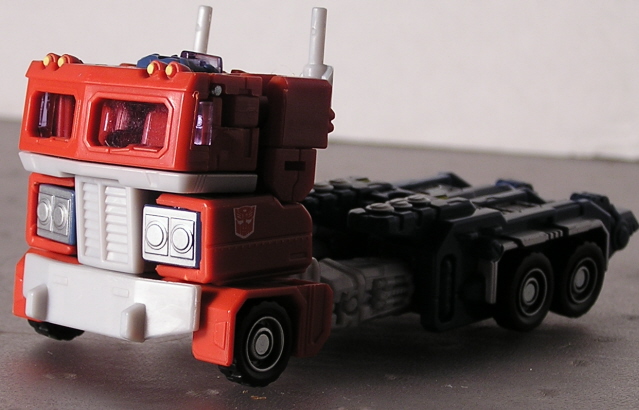 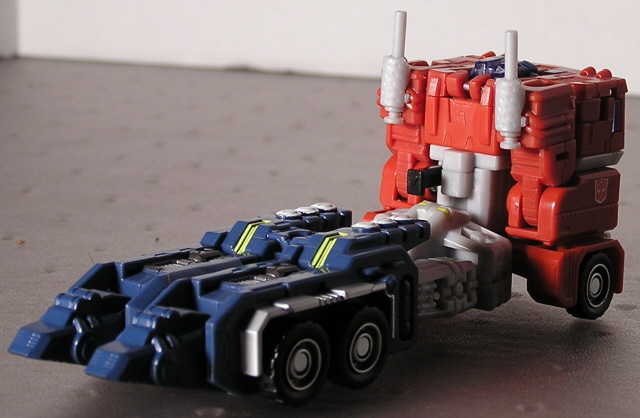 Optimus' Deluxe alt form harkens back to his G1 semi look. The color scheme is also the same as with the G1 version, with a red cab and blue rear end. Unfortunately, it doesn't come across as very clean. A lot of this has to do with the fact that his legs don't retract into themselves, creating an absurdly long back end. The short cab on the front end doesn't help the figure seem proportionate, either. The cab windows (which show a semi-detailed cockpit) protrude out farther than the grille or headlights, further ruining the aesthetics. Then there is the exposed head on the roof. 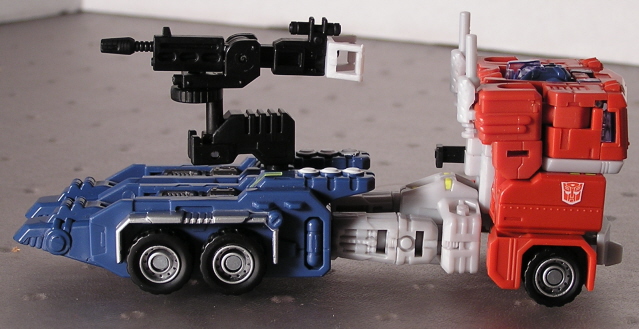 Optimus has a cannon mounted on the back of him. I suppose this could be used as a mobile cannon platform, due to the design. The gun itself is decently detailed, complete with scope and ability to rotate and on it's mount. I suppose this could be the one highlight of the alt mode. Note the black lever at the back of the cab. This serves no purpose in Alt mode, but has a purpose later. Transformation is rather simple and comparative to the Voyager version, albeit simpler than that. 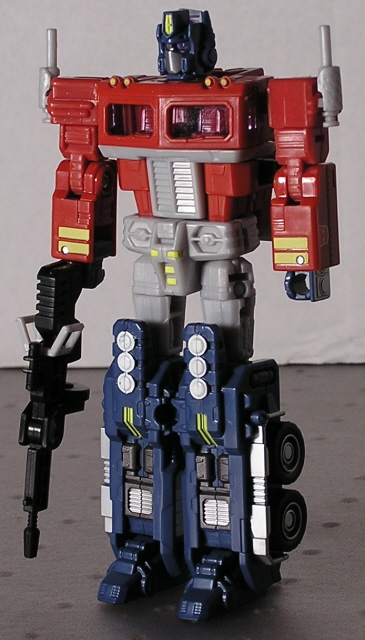 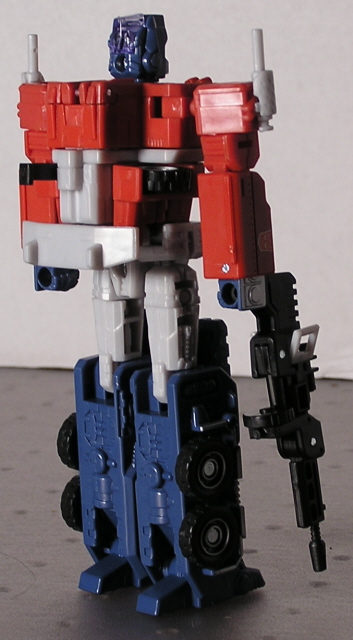 Fortunately, Prime's robot mode comes off looking MUCH better. The detail in this mode is surprisingly good. The gun that was on his rear end now becomes his hand weapon. It's a nice weapon, similar to a tommy gun. Optimus' eyes have lightpiping, which is a lighter shade of blue. The effect is somewhat eeiry, especially with the bugeyes Optimus seems to have. Here also Prime retains his coloring, with the red chest and blue legs. Gold also shows up near his wrists as well as the waist and legs. 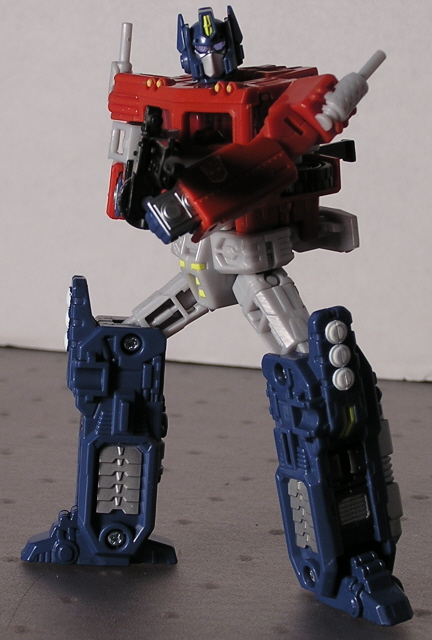 If this Prime has one strength, it's in his poseability. The joints are very tight and have alot of bendability. If you like to give your figures various stances, this Prime makes it simple with fully bendable knees, hips, shoulders, elbows and head. Earlier, I mentioned the black lever on the back of his cab. If you press this button in Robot Mode, it gives Prime punching action, much like the Supercon Optimus Prime figure from Armada/Cybertron. The lever seems jammed but it takes effort to activate the punch feature. Be warned that once the chest is unlocked, it spins uncontrollably. However, you can now use the punching gimmick to no end.... kinda weak. If you pull the lever back again (it takes a little force to pull back), it will relock his chest. This brings me to a final point about Prime. HE IS EXTREMELY FRAGILE!!. The waist section, particularly in Alt mode, always tried to work it's way loose. 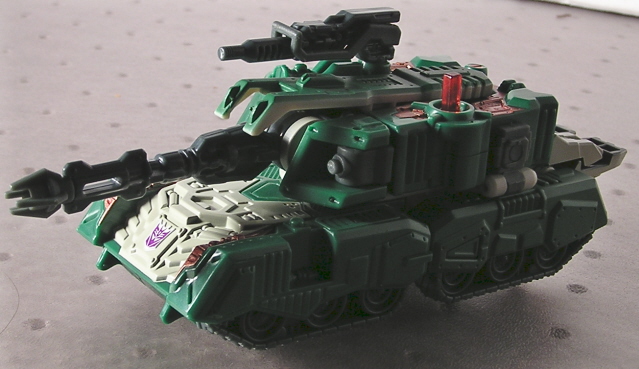 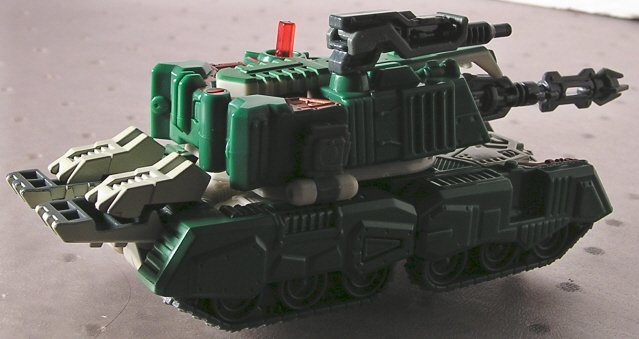 Megatron's Alt mode this time around is a tank. The tank is mostly green with a white front end and copper accents. There is a main turret and a mangun on the top right side. He has 4 rollers under his treads for movement. The overall look is interesting. While you wouldn't expect white and green as a color base for a tank, it goes surprisingly well. 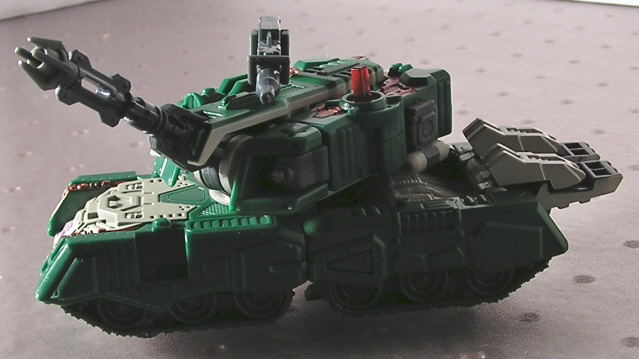 The main turret has pivoting capability and can rotate 360 degrees. The rotational ability is mostly smooth. There is the curious red lever on the top. This serves no purpose in Alt mode, but like Optimus has a purpose later. Transformation is relatively simple and somewhat identical to the 6" Titanium GIJ Megatron. 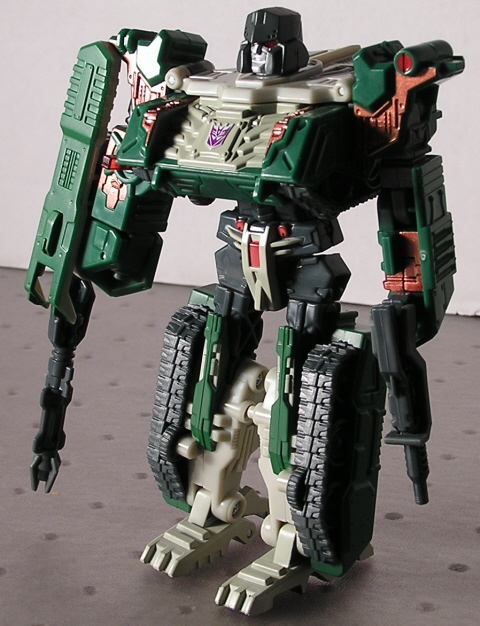 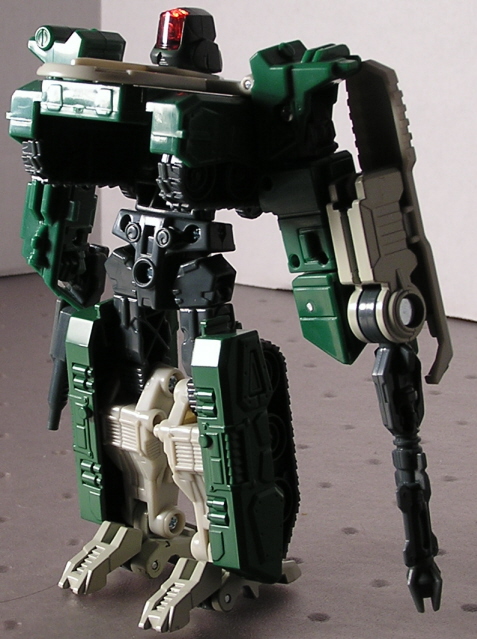 Megatron's robot mode is actually quite nice. More white shows up on the legs, while more copper comes out on the arms. The mangun that was on his turret forms a gun for his left hand. The main turret becomes his arm cannon. Unfortunately, he has no right hand. Megatron has more of a mecha-organic look to him, which actually comes across pretty good with this figure. He has light piping thru his bugeyes, which is accurately red. Personally, I prefer the face sculpt of this Deluxe model over the Voyager one. 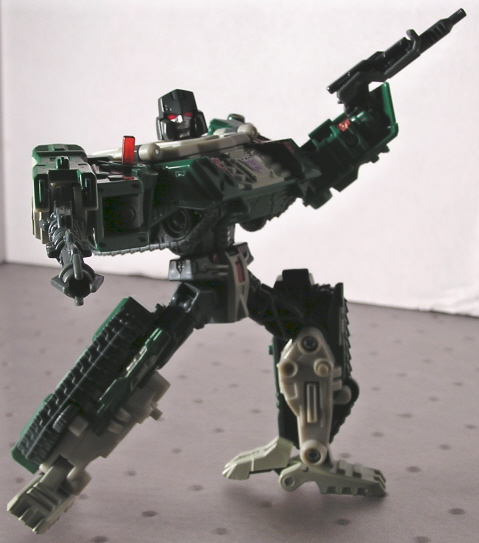 Like Optimus, Megatron is a haven for posing. While not as articulate in the shoulders, Megatron makes up for it with additional foot articulation. Again, the joints are tight so you should have no problem finding a pose you like. If you tilt the arm cannon in 90 degrees inward and flip back the cannon guard, you have the ability to activate Megatron's "spinning blade" gimmick. This is where that red lever comes in. Pressing it will rotate the 'blade'. Interesting enough gimmick, I suppose. One more unfortunate similarity to Prime. Megatron is also FRAGILE. The cannon guard is hard to keep in place when in alt mode and his right forearm likes to pop off. It's not a matter of poor QC as much as it is a matter of poor design. There is one more aspect of this boxed set and that is the 'exclusive' DVD.

There has been a debate over the contents of the packaged DVD. There are 2 features on this disc. One is a photo gallery of the first 2 waves of the Classics lineup. The other feature is a 20min episode narrated by Cybertron Optimus Prime. This episode has some new animation in it (mostly Cybertron rendered) and features cuts and bits from the Armada, Energon and Cybertron series. To summarize briefly, if you never watched it, you wouldn't miss a thing.

This is the first of two 2-packs to be available with Classics. Soon, the Target exclusive Ultra Magnus vs Skywarp set will be released. That set features repaints. However, the nice part about this set reviewed is that they are unique figures. While Prime's alt mode seems to be poorly designed, overall both figures are good enough to consider buying. Just keep in mind the poor design of the limbs and the tendency for them to seperate easily. The good news is that at least they can be easily reconnected. I am hoping that the issue with Optimus' ratcheting feature is unique to the one I purchased, but nonetheless use caution when trying to activate the punch feature. It's a nice add to the collection at only $20 retail pricepoint, but it's not worth scouring for.