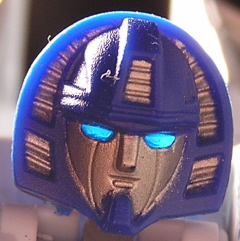 "You can't catch what you can't see"

Mirage has had some identity crisis as of lately. He went from being a minicon F1 racer in Armada to, of all things, a Decepticon gunboat in Energon. Absent in Cybertron, Mirage goes back to his roots and makes an appearance in Cybertron in something much more fitting to his G1 roots.

Mirage's alt form is a F1 formula racer. His primary colors are blue with a white nose, cockpit and rear wing. The #26 appears on his nose and sides. While he no longer has Citanes as a sponsor, he has picked up Witwicky Sparkplugs, F.P. Racing and Lithonian Drivetrain as new sponsors. The detail is pretty nice, including his quad pipes in the rear. Overall, a pretty sharp racer. His transformation is somewhat tricky but after a couple of goes you get used to it. 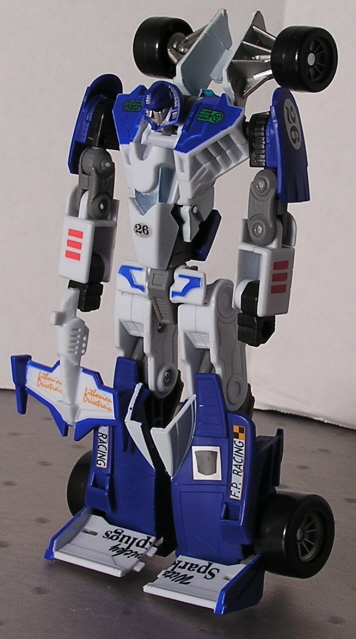 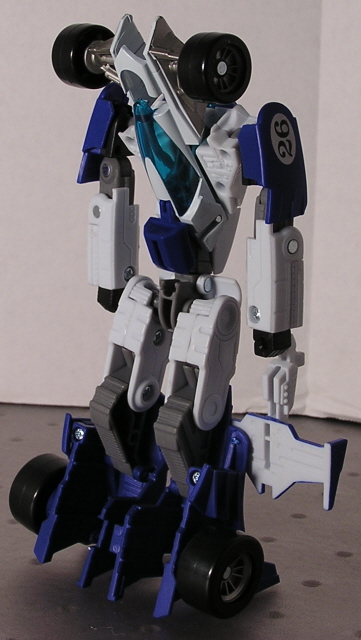 His robot mode follows his G1 roots as well. He's still primarily blue and white, but some orange shows up on the forearms. The face in particular is very spot on the G1 anime look. They did a good job on it, and it has blue piping to boot. His front spoiler becomes an energo-disruptor for either hand. Looks like a crossbow to me, but meh. There has been concern about the anorexic looking waist, but the pictures seemed to have focused on that. While thin, the waist is pretty solid. In fact, my sole gripe about the Robot mode is that the front wheels just hang behind his head since they're molded to the cockpit that sits on his back. Too bad they couldn't find a way to fold the wheels back. 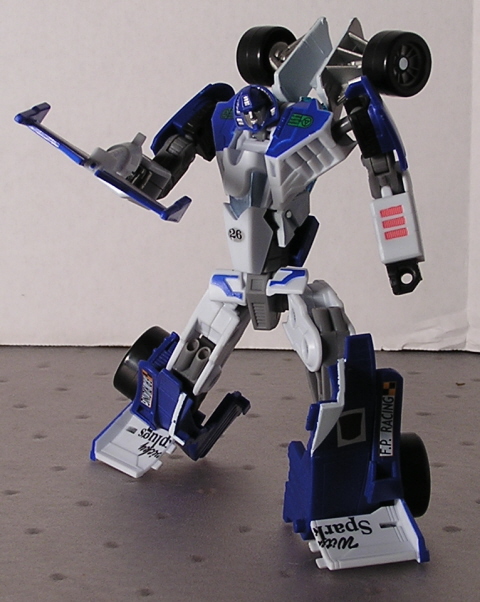 His posing ability is definitely one of his pluses. This is due to his nice range of articulation. His feet in particular can pose at an angle. All joints are free ranging ball joints and they're also very tight. Even his head has a full range of vertical and horizontal motion. While not entirely perfect, Mirage again proves how the Classics line is coming pretty darn close to being the best series in years.