When new Minicons were revealed using the Classics style packaging, there was a lot of disgruntlement. After all, Minicons were only began when Armada was released. Mind you, there were miniBOTS around at the time. At any point, although the newest Minicons are not labeled as part of the Classics line, they use the same packaging nonetheless. Three new teams are revealed with the first set. This review will focus on the Decepticons known as the Demolition Team. They live to destroy anything made by Autobots. Let's look at Wideload first. 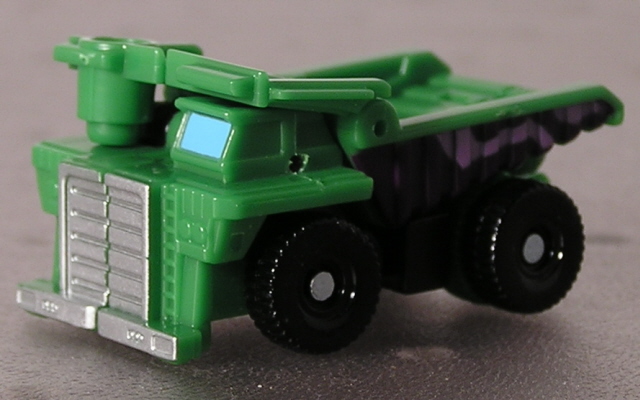 As usually is the case lately, Wideload's alt mode is a dump truck. He is primarily construction green with some purple accents on the bed sides. The cockpit shield has a Decepticon insignia on the left and a Minicon port on the right. 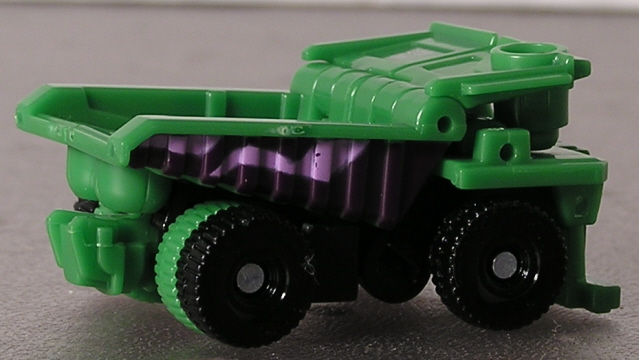 There is actually a nice bit of detail in his alt mode. The bed also fully tilts, which is a good touch. All four wheels are rollers. The only bad spot is where his head is showing on the rear end. Transformation is simple. 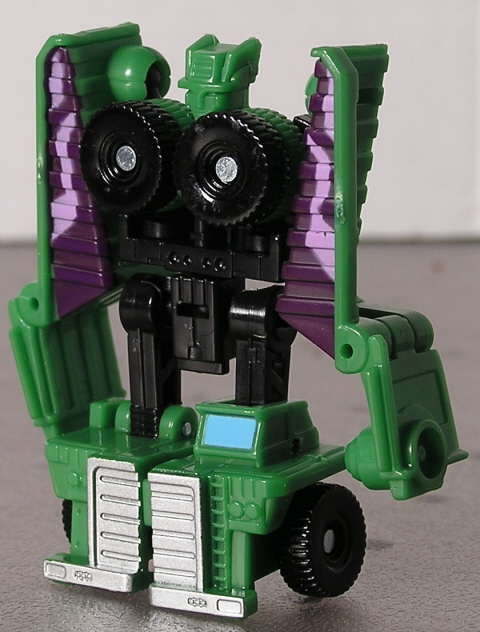 His robot mode is pretty decent. The official pics show his alt mode nose, which becomes his feet, facing the back. I thought they looked better showing at the front. 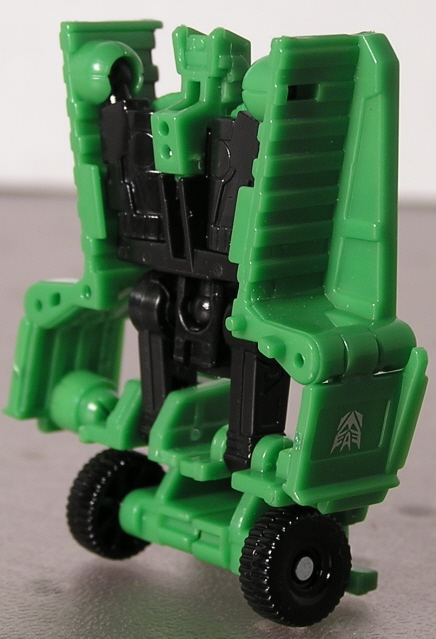 His only detraction in Robot mode is the lack of hands. Instead, you have flaps which are the cockpit shield in Alt mode. He's pretty steady to stand though. Out of the three, he is the favorite of the group. 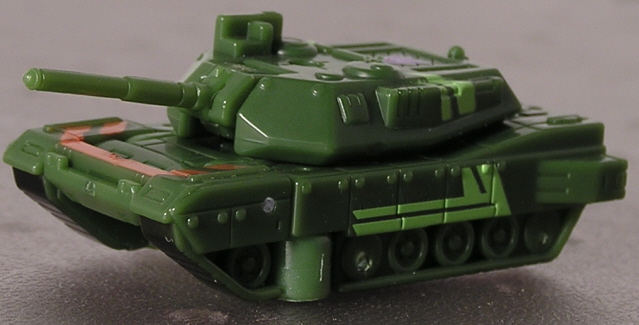 Broadside's alt mode is a tank. He is almost entirely green besides some bronze showing on this front end.

He sports his Decepticon insignia on the rear of his turret. His Minicon port lays under his belly. 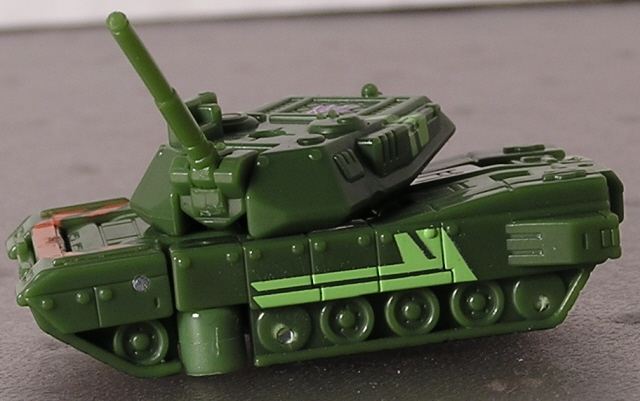 One nice feature in his Alt mode is that his turret is rotateable 360 degrees and his turret can be vertically aimed up to 90 degrees. Be careful with aiming the turret too high, though, or you'll expose his head. Transformation is easy, but remember that you have to flip his hands out. It could be easy to forget. 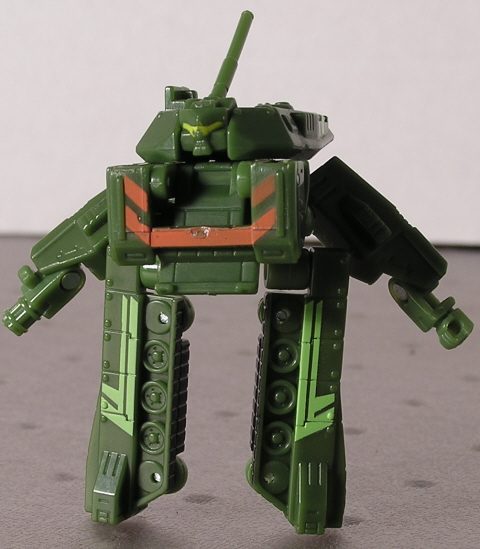 His robot mode comes off looking clumsy. The hip and shoulder jointing is practically on top of one another, so posing is limited. 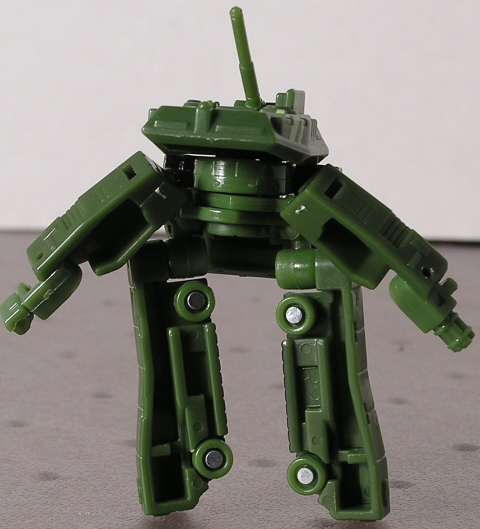 Add to that that there are no knee joints and the fact that his footprint is awkwardly small, and it adds up to being a challenge to pose. He has a great Alt mode, but his robot mode has some disappointments. He still finishes midpack on this review.

Sledge's alt mode is a backhoe. He has a very intriguing color combonation of orange, yellow and black. Like Wideload, he has 4 moveable wheels.

Also, like Wideload, he has some nice detail which include the stabilizers on the rear end. The front shovel and rear hoe also come with some good jointing. 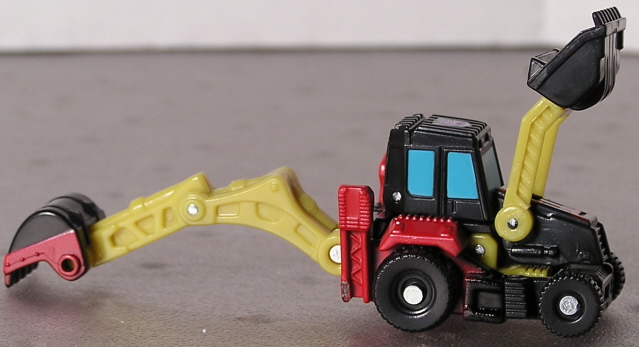 The alt mode provides a variety of ways to enjoy him due to the range of the shovel and hoe. Transformation is simple. 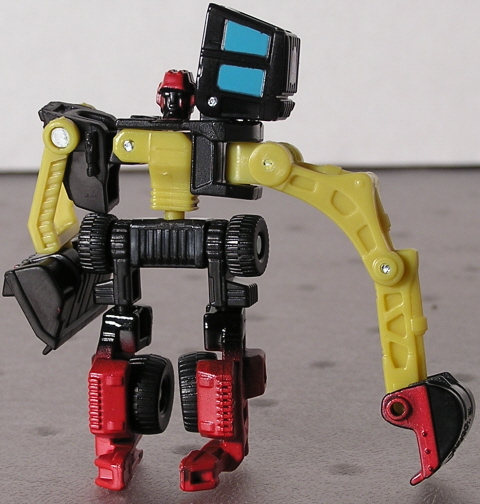 The robot mode is abominable. The chest area looks like a jigsaw puzzle. The arms also look out of place, as they are asymmetrical to each other and don't even bend evenly. 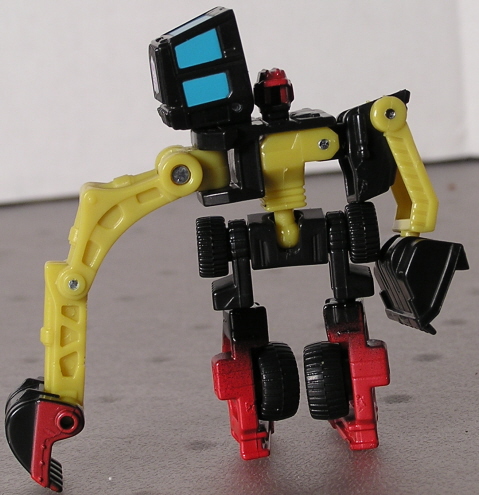 The cockpit in the alt mode tilts to the side to reveal his head, which is probably the only positive aspect of his robot mode. This figure is best left in Alt Mode, the robot mode looks too piecemeal to be of any merit.