"We fight where others fear to go"

Since G1, there has never been a Dinobots team. The latest Minicon team isn't exactly the Dinobots some people remember, but it is nonetheless a team made up of dinosaurs. 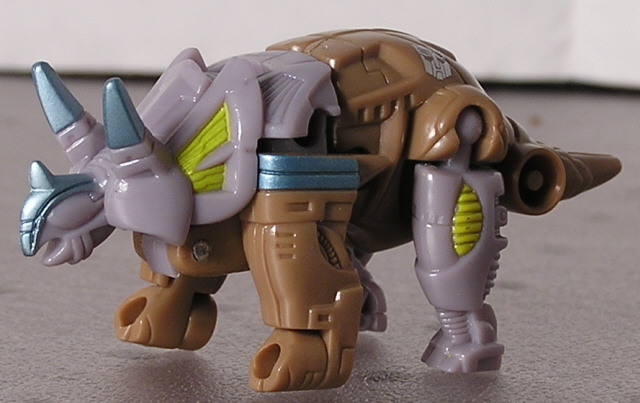 Knockdown's alt mode is a triceratops. Coloring is primarily tan and silver with some yellow and turquoise thrown in. His Autobot insignia is located on his left rear hip. He has a Minicon port on either side of his tail. 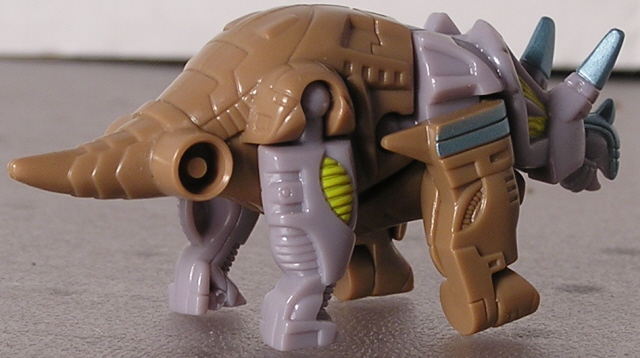 It looks as though his legs would have good movement, but those ball joints are misleading. In fact, there is hardly any leg movement available. All the same, he looks real good. This transformation is not what you think it would be, but it's easy to figure out. 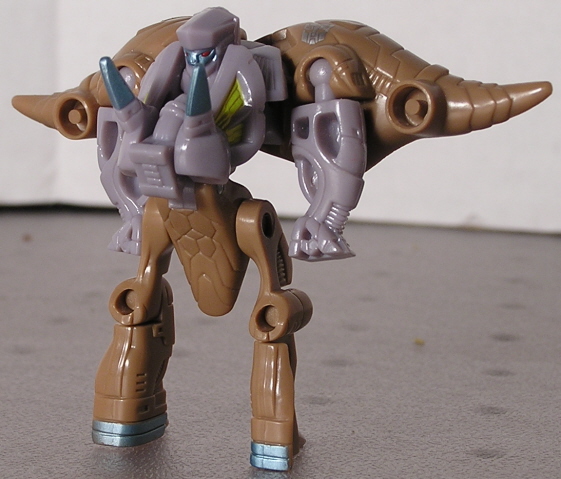 Knockdown has the best looking robot mode of the team. The primary colors remain the same. 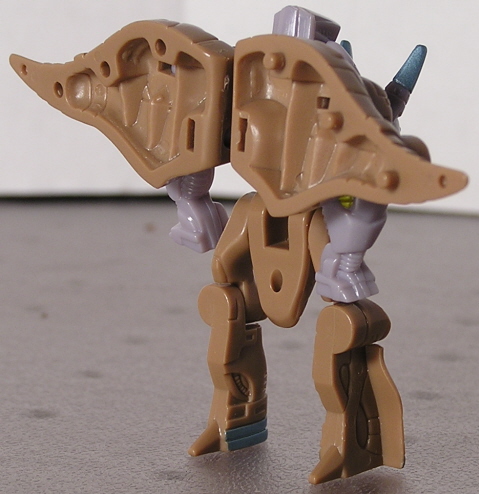 Although the legs look a bit skinny, he nonetheless stands pretty well on his own. There is no knee or elbow jointing. The overall robot look is pretty menacing and overall looks great. 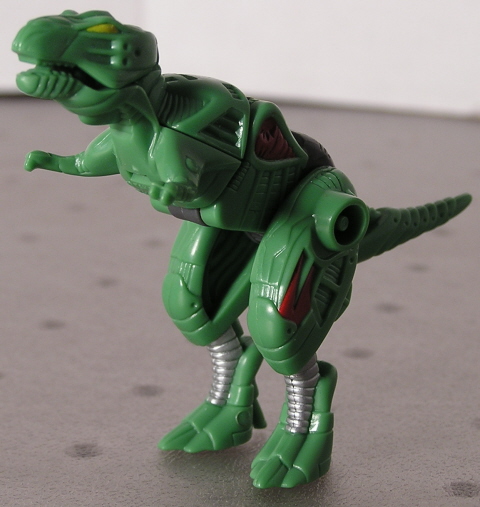 Terrosaur's alt mode is a Tyrannosaurus Rex. He is mostly green with some red and silver accents. His Autobot insignia is behind his head. 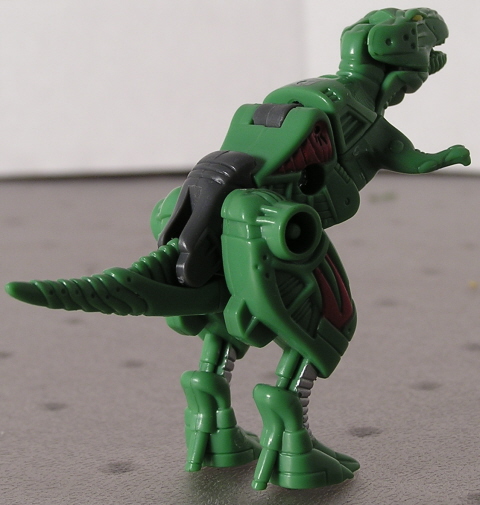 His jaws do open and close and he has hips, but no knees. Therefore, there's not a whole lot you can do in this mode. Transformation is real simple. 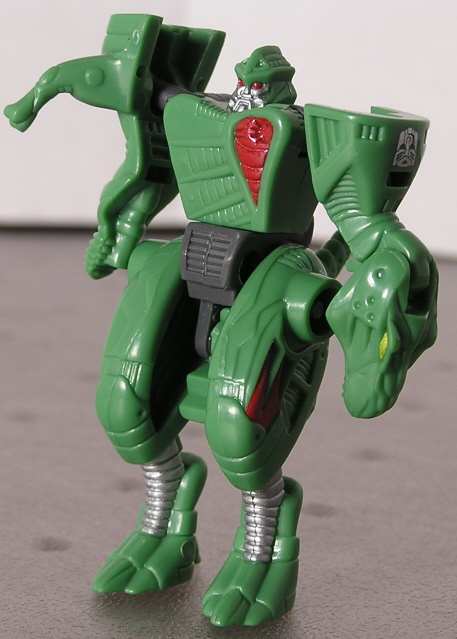 Terrosaur's robot mode reminds me some of BW Megatron. The only difference is that the Alt mode head splits in 2 and forms each arm. The Autobot insignia now appears upside-down on his left shoulder. 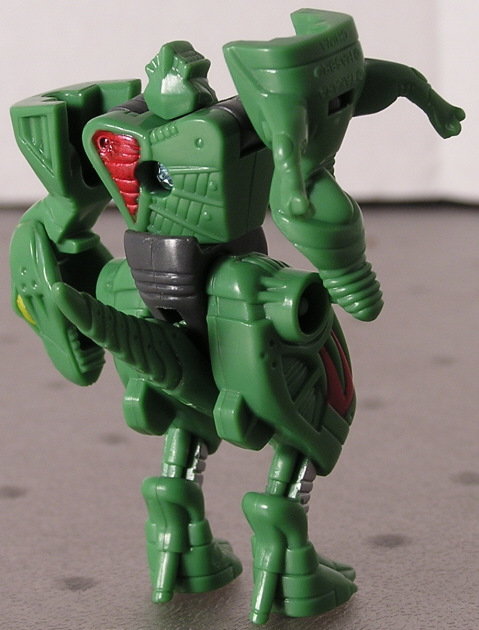 The one thing that detracts from his robot mode is that his T-Rex arms still stick out on his right arm. If they just folded back, it would look much better. Overall, the robot mode looks good.

Swoop's alt mode is a Pterodactyl. He looks more like a prehistoric woodpecker to me. That's probably due to his primary color being red, with some silver and yellow thrown in. His left wing sports an Autobot insignia.

His beak does open and close. Unfortunately, depending on how you position the beak, his robot head is exposed in the back. He has a Minicon port on his belly. His transformation is somewhat complex but you can eventually nail it down. 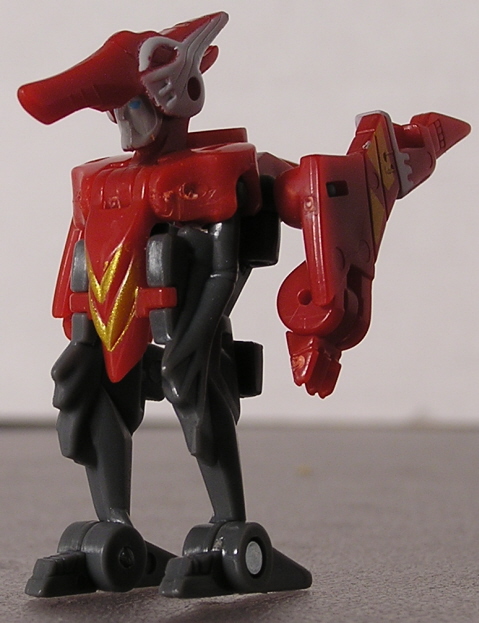 His robot mode doesn't translate as well. First off, he is significantly smaller in stature than his teammates. He also has the same type of legs as Divebomb from the Night Rescue Team, but it's better camouflaged with Swoop. 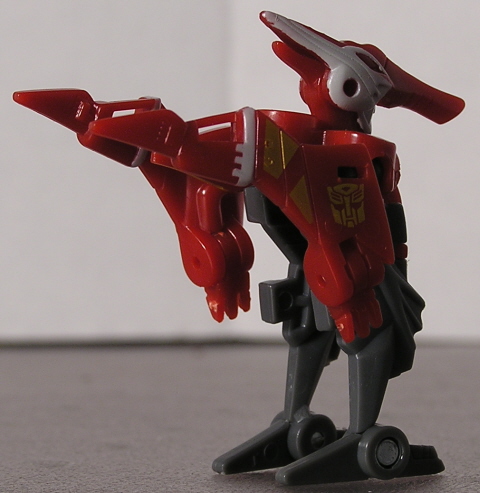 If you didn't notice, the pics shown are not the official robot mode. I chose this configuration because it bugged me that Swoop had no hands. Just a matter of personal preference I guess.

It's nice to see a Dinobot team again. If we're lucky, maybe we'll see a deluxe version in the future.