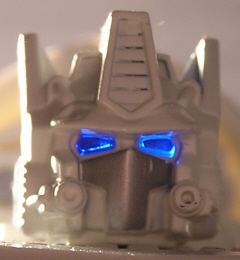 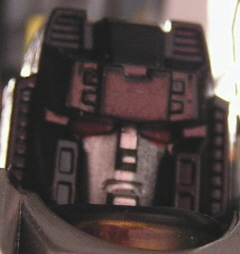 Skywarp and Ultra Magnus are both figures that haven't seen much action since G1. Ultra Magnus did get his own design for Rid and was able to bond with Optimus Prime. However, he didn't appear again until Energon, when he was a limited number repaint of Overload. Skywarp's recent appearances have been in Armada (retool of Starscream) and Cybertron (repaint of Thundercracker). This unlikely pair has been teamed up to do battle in the Classics line. 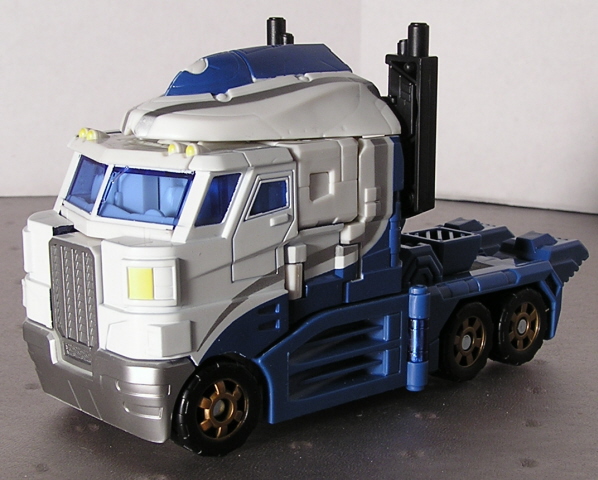 Magnus is a straight repaint of Classics Optimus Prime. The color scheme is easy enough, mostly white with blue swiping at the bottom. He also features gold wheels, which looks odd on a semi. The windows are blue like Prime's. Also like Prime, Magnus has the wind vane and smokestacks. 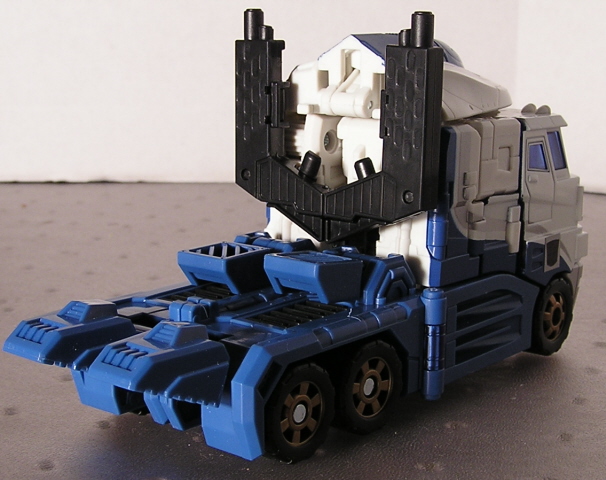 This does seem fitting since Ultra Magnus was, in G1, a white version of Prime with a different trailer. That is perhaps what makes it hard to believe this is Magnus... there is no trailer. Transformation is identical to Optimus Prime. 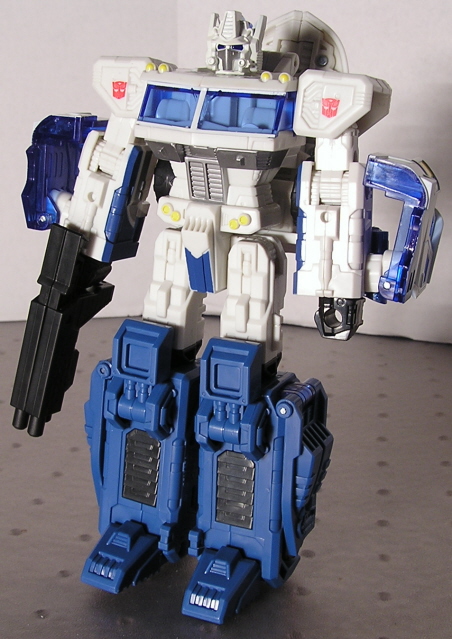 The robot mode is also similar to Prime albeit white and blue. There is a lack of painted detail to this Magnus, which makes him look a bit flat. However, there is bittersweetness to this. I have noticed that the pegs which attach the smokestack to the forearms has a tendency to rub off paint if you can't find the peg. In this respect, Magnus is better. 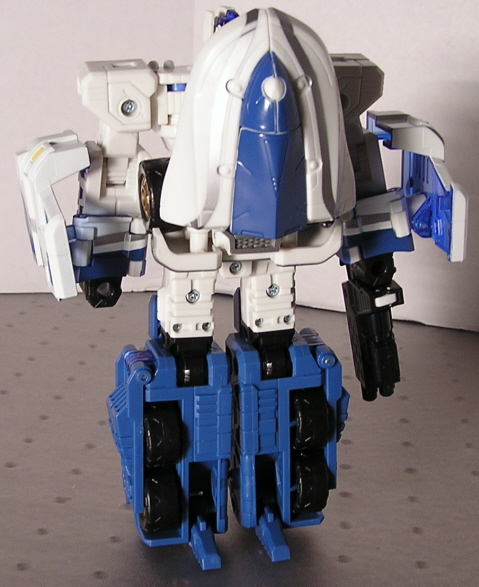 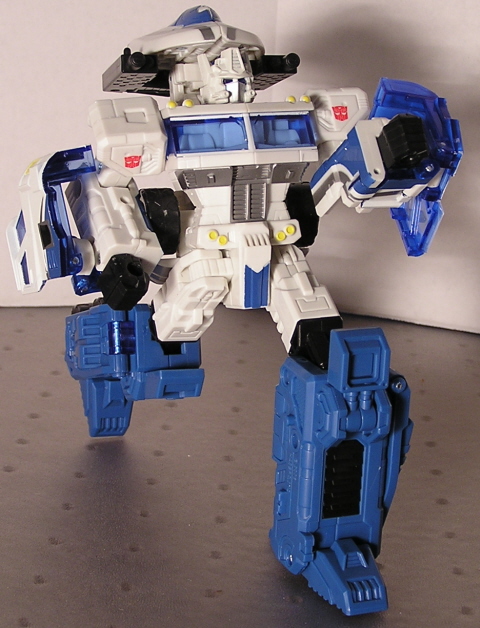 One can only hope that Hasbro (or someone else) comes to their senses and makes a trailer for Ultra Magnus that can transform to his exoarmor. Until then, I can't see this as anything more than a white Prime. Due to the lack of details in either mode, it's a rather bland white Prime at that. 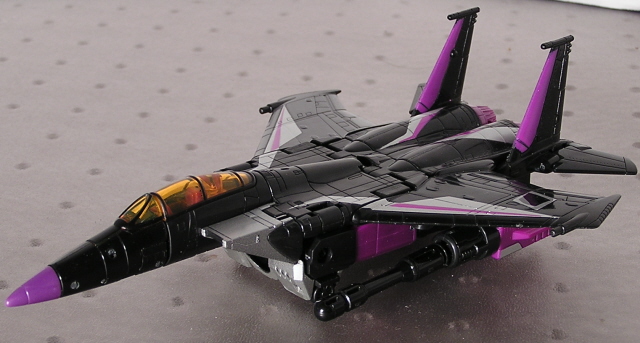 Like Ultra Magnus, Skywarp is a straight repaint. Skywarp is identical in mechanics to Starscream. The paint job is black with purple and silver accents. Personally, I like the paint job on Skywarp better than Starscream. Starscream's looked to bland but Skywarp's has some style to it. 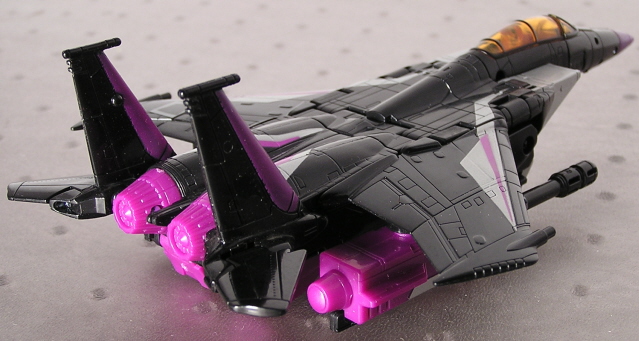 The landing gear is unfortunately also exact to Starscream's. Perhaps I'm crying over spilled milk but a nose wheel would have done wonders for this alt mode. The gaping hole in the belly doesn't help matters either. Skywarp's transformation is identical to Starscream's 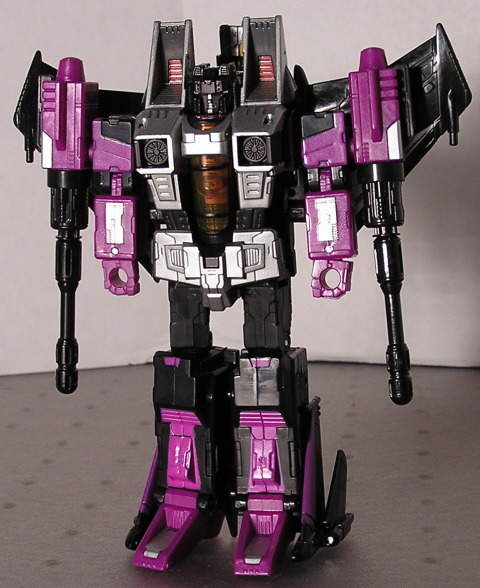 Skywarp again is identical to Starscream in appearance sans the black and silver treatment. One of the few differences is that Skywarp's chest glass (or cockpit) is a darker burnt orange color versus Starscream's yellow chest glass. 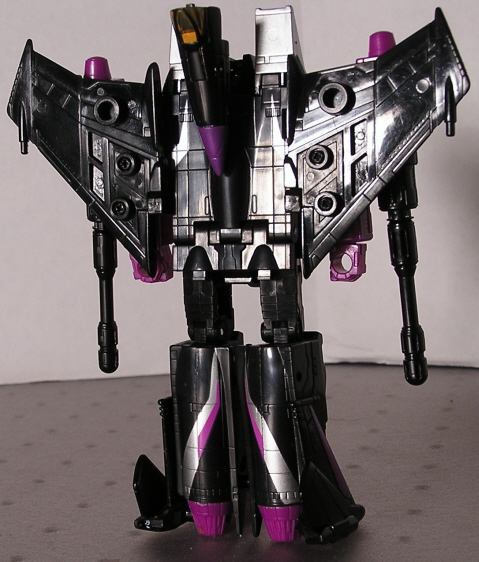 Another difference is that they actually painted Skywarp's face silver instead of leaving it the natural ABS color. This makes a world of difference in the look of the face. One can only wonder if they might go back and paint Starscream's face in later issues. 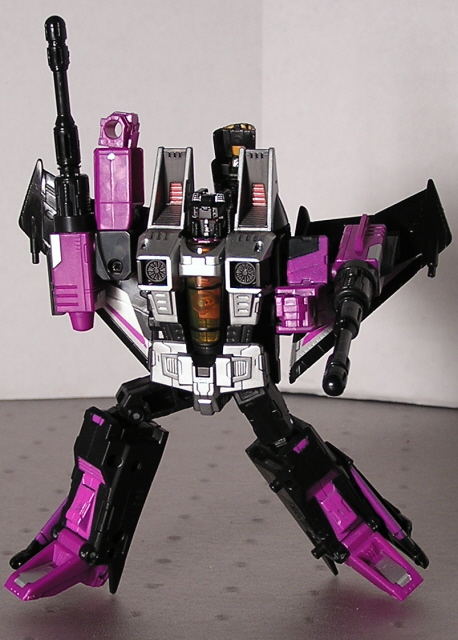 This set is sold exclusively at Target stores and is just starting to emerge on shelves. This set was found on an endcap together with the OP/Megs 2pk. It's only $20MSRP to boot, and it seems it'll be the only way to get Skywarp and (hopefully) have a seeker set. 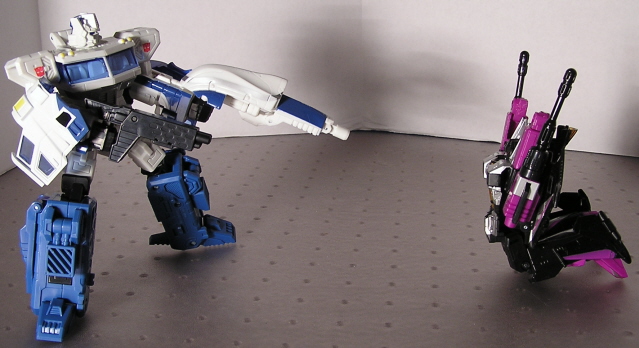 P.S. Because sometimes, I do take requests. Besides, I don't want to be bias towards Cons or Bots. 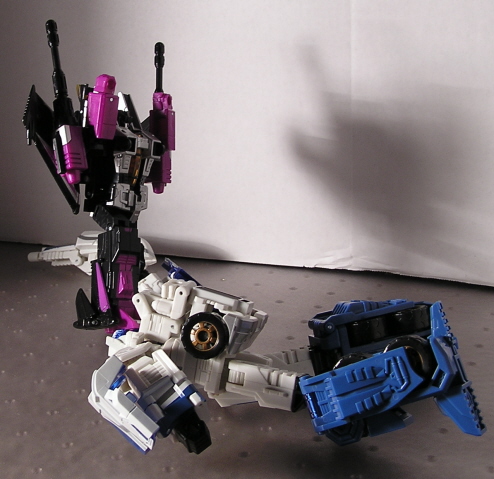