"The universe is our hunting ground"

So far as it looks, the Predator Attack Team may be the closest we get to actual Predacons. Like the Predacons, this team is made up of Decepticons that live for the hunt. This instinct can even override their mission objective. 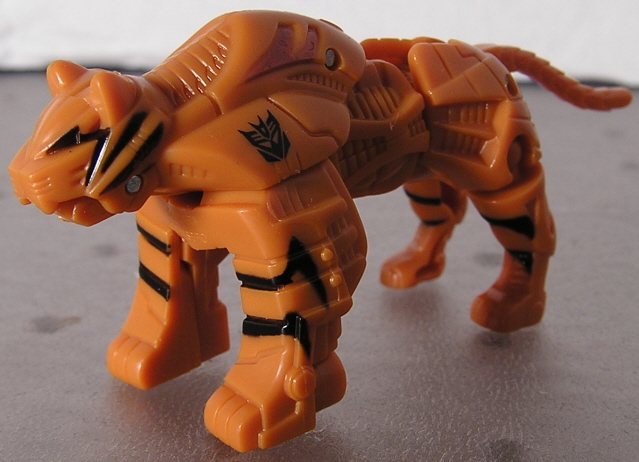 Snarl seems to be another Autobot who switched sides for the Classics universe. This time around, he is a tiger. Color is mostly orange with black stripes. There is a Decepticon insignia behind his head on his front left shoulder. 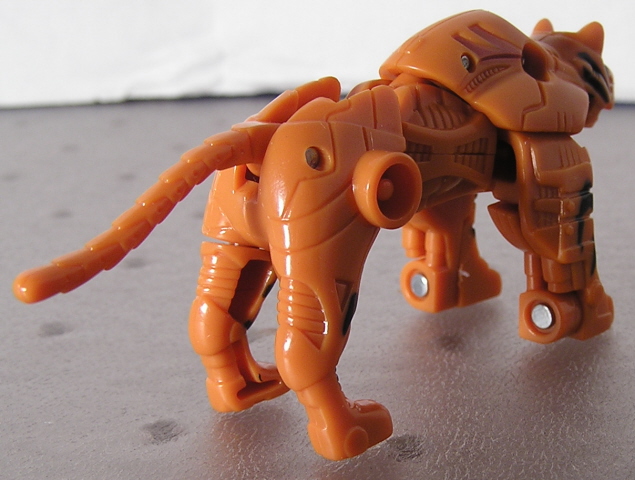 His minicon port is located on his right hind leg. His jaws open and close and the tail does move, giving the Alt mode some nice features. The broad front end also gives off an aura of power. Transformation is simple. One note: The front legs hinge out from the sides. 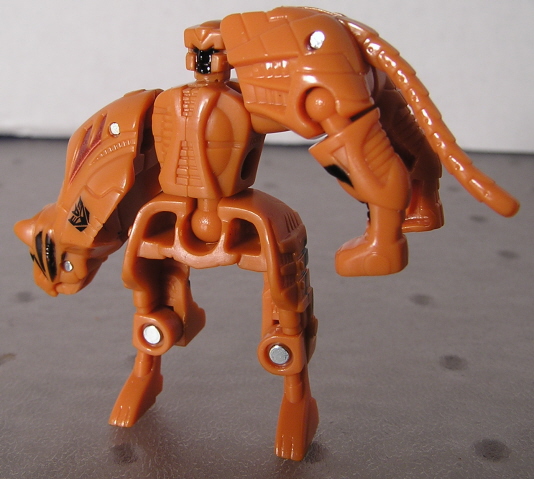 Snarl's robot mode has to be, in my honest opinion, the worst of the Classics line... if not ever. I think it's even worse than Cybertron Backstop. The left arm won't even retract all the way down without coming off the peg! Both hind legs make up the left arm which is just stupid. The left "leg" does hinge though. The right arm makes up the tiger head. 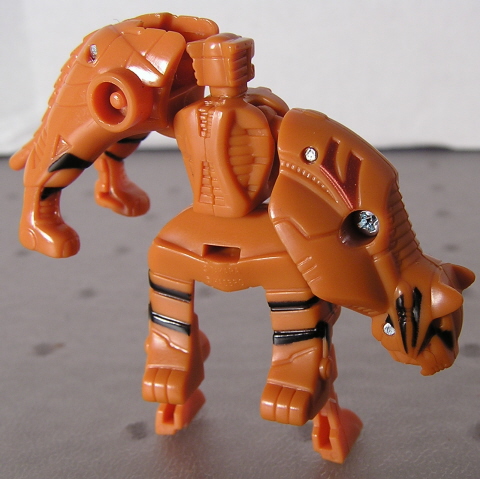 The legs are tiny compared to the body and just looks out of place. If there's anything nice to say about this mode, it's that they at least gave some dignity to the head sculpt. It is extremely well done for a minicon. Do yourself a favor, forget this guy had a robot mode. Sorry, I had to get that off my mind. I promise the rest of this review is more positively written.

Dreadwing is an eagle. The color scheme is mostly brown silver and red accents. The red head almost would make you think this is actually a vulture. Perhaps it is, it's open for debate. A Decepticon insignia rests on his left wing.

A minicon port resides on his belly. Tucked underneath him as well is his claws. Unfortunately, there are no joints for the legs so they're best left tucked underneath. The detail is quite nice and the wings can sweep at the secondaries. Transformation is reminiscent of Energon Divebomb and simple to master. 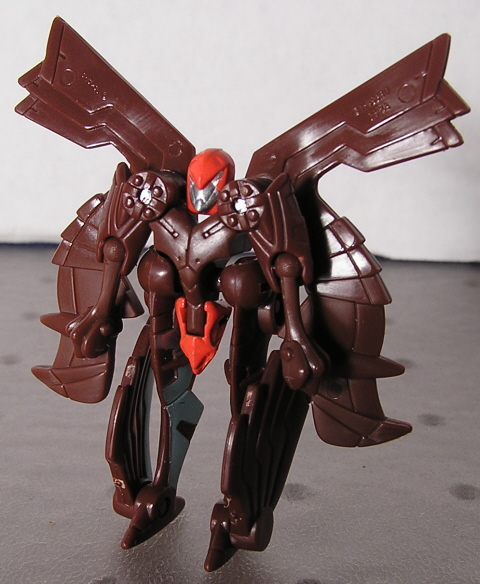 Dreadwing's robot mode is extremely well done. The front of the wings form his legs and he is very stable when standing. The claws form his arms and the back of the wings rest on his back which gives him a very ominous look. 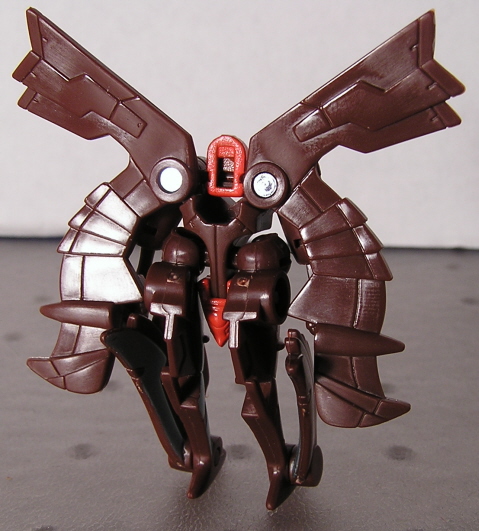 The head sculpt is nicely done on this figure. It's too bad this wasn't used as a deluxe. I could imagine how this basic design could have turned out for a larger mold. 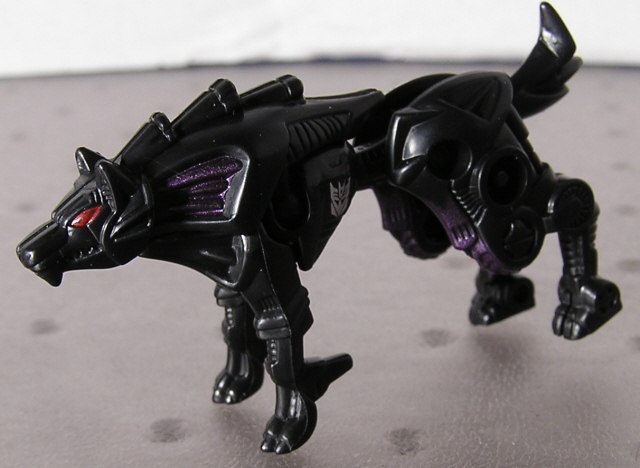 Overbite's alt mode is a wolf. He is almost all black with some dark purple on the ribs and hind legs. There is a Decepticon insignia on his front left shoulder. His eyes are red. 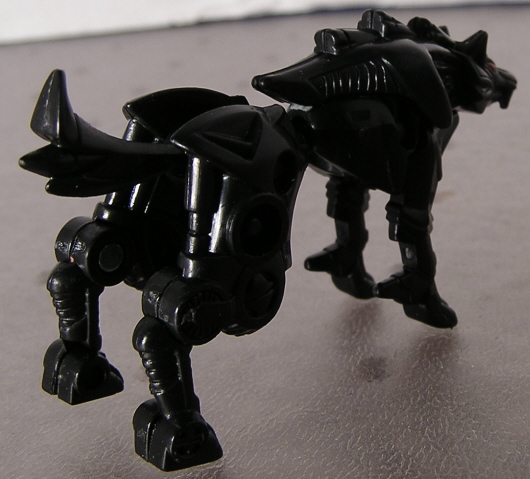 He has a minicon port on either of his hind legs. The tail does move but sadly, there is no jointing for his jaws. The alt modes overall for this team is very well done. I especially like how Overbite's alt mode turned out. Transformation is very simple. 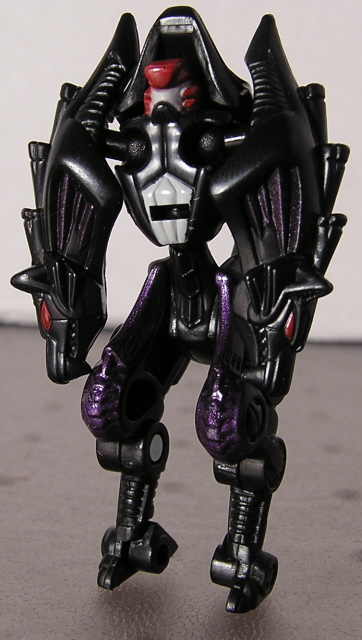 His robot mode is equally impressive. The hind legs form his robot legs, the wolf head splits in half to form his arms, exposing his head which is red in color. The head sculpt isn't too detailed but still comes off looking good. 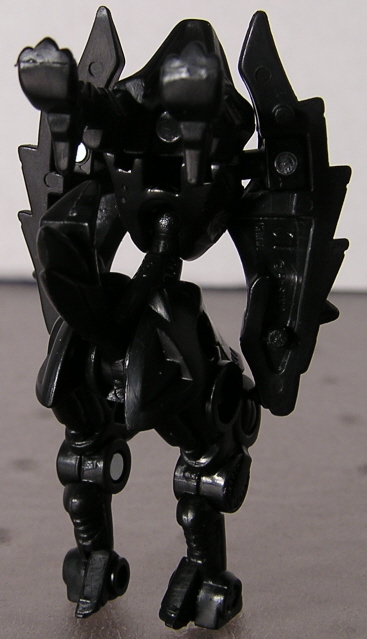 When forming his legs, there is a haunch that folds out from the feet to give this figure better stability. The tail folds up behind him. With the exception of Snarl's robot mode, this team is very well done. It's a shame that craptastic robot mode of Snarl has to bring down the overall score.