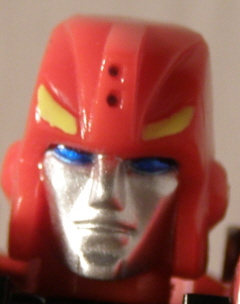 During TF:TM, young Hot Rod inherits the Matrix and thus becomes Rodimus Prime. While retaining the same basic look, he was a little taller and the face a little wiser looking. However, he assumed a mode that had a trailer. Depending on which episode, he either still retained his sports car cab or had a half car/half legs look. The action figure sold in stores was, however, not half as good as it could have been. Perhaps in atonement, Titanium has given us a new interpretation of Rodimus Prime via the 6" line. 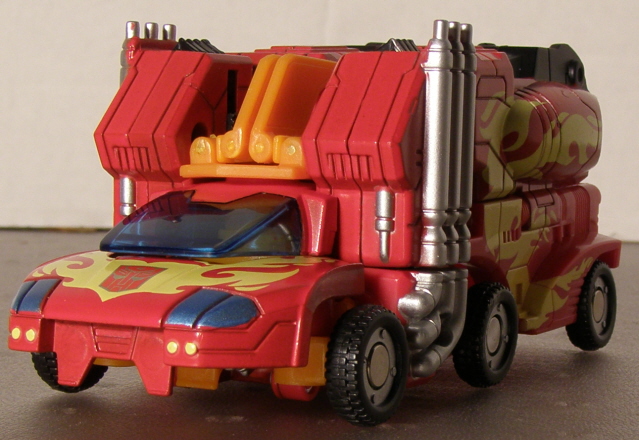 Rodimus' alt mode is a Cybertronian semi. He is predominantly red with a yellow flame job stretching from the hood to the trailer. He has a trio of exhaust stacks on each side that start behind the cockpit and extend vertically just past the trailer's roofline. He has 6 wheels total, one on each corner and a pair at the front of the trailer. There is a convenient storage slot under his otherwise hollow trailer to store his gun. Overall, the alt mode is basically true to the original G1 form. 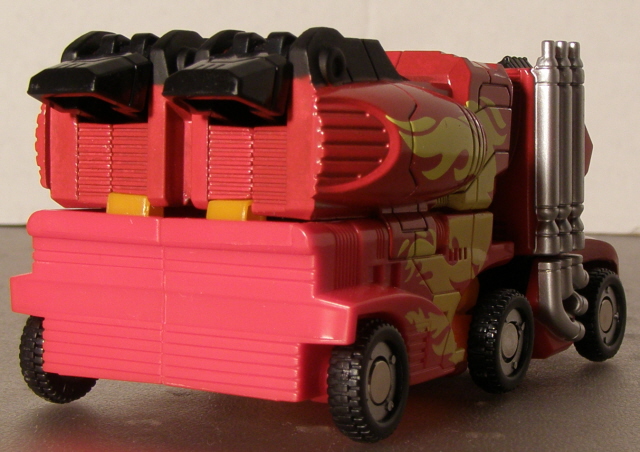 However, I am somewhat disappointed in this mode due to the fact it isn't as streamlined in looks at in the anime... or even the original G1 figure. The front end is stubby and the cockpit glass is bubbled, rather than flush and stretching the width of the hood. The wing, while being overly flamboyant in the Classics Hot Rod figure, resorts to being folded up behind the cockpit. Due to the arms/smokestacks positioning, there is no way to fold out the wings. The arms themselves do little to conceal the fists on top. In my opinion, the alt mode is lacking. Transformation has enough effort in it to make it interesting, but is very easy to learn. 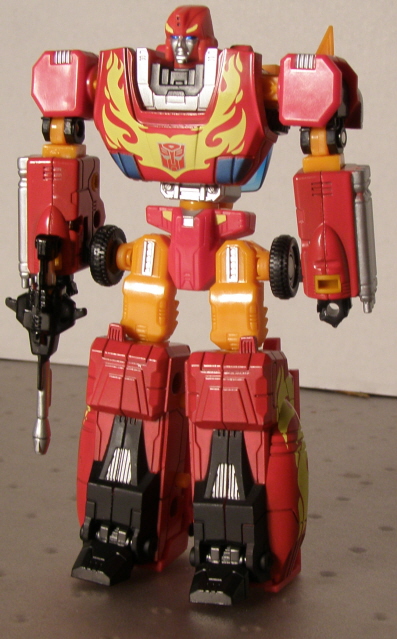 Rodimus' robot mode is lightyears beyond the original G1 mold. The trailer section, which is non-removeable, forms his legs. The smokestacks form his arms and the hood flips over to expose his head. The red/yellow motif remains, with some orange thrown in around the limbs. This mold makes it look like Rodimus has been pumping some serious iron. He almost comes off looking TOO bulked, especially with the smallish head. The head sculpt is almost too wrong looking. It is too boyish looking for a Prime. The wing, which was folded up in alt mode, is way too small to even be noticed. 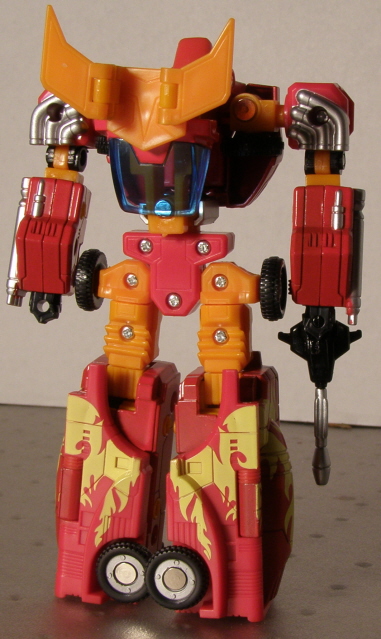 One small disappointment with the robot mode is the weapon. The gun is an almost exact copy of the G1 weapon. However, the peg used to place it in his hand is too skinny, so the gun tends to float around. Articulation is overall very good. He has very good hip and shoulder movement. While it looks like he has good waist movement, there is some back kibble that is just long enough to keep the waist stationary. The only weakness in joints is the knees and elbows, which have limited range. This mold is definitely an improvement over the original G1 figure. However, there are just enough small nuances to keep it from being a home run. 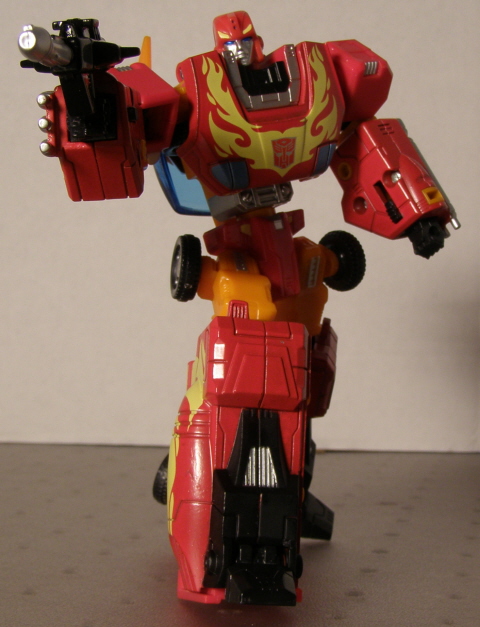