When I heard Megatron was in stock at The Falcon's Hanger (a toy shop that I always buy from), it kinda got to me giggly and excited as it arrived maybe a day or two before the expected date PLUS it was around USD$77, seeing that I paid SGD$110. However, after I brought it home, after protecting it on the bus from people falling over thanks to the maniacal bus driver swerving left to right, I realised a few immediate problems with its design.. Heres the run down on what you get though:

Megatron
Scope/Cannon
Kremzeek
Pistol used in 1985 movie
Laser sword used in 1985 movie
Energon flail
A Megatron tech spec card
An instruction booklet, written within as well is "BEST STORY OF MEGATRON", and a toy history of all the robots that have carried the name Megatron too.
Some contest coupon or something.

(BTW, please ignore the dates of the photos, I didnt steal the prototype from the Takara workshop, corperate espionage is moreof Soundwave's thing.) 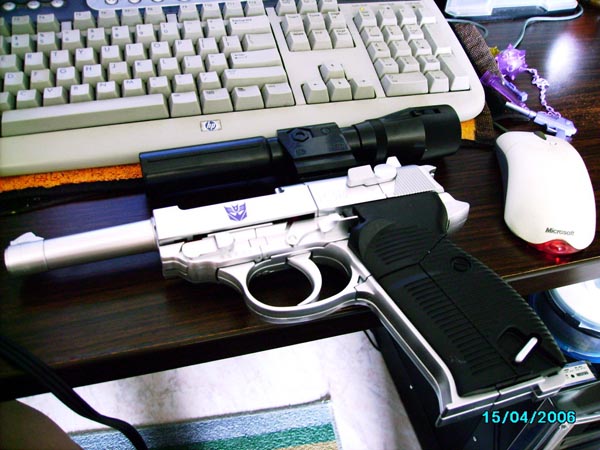 Here displayed is its alt mode, a lovely mold, its even got a safety lock that can be put on and off. Its trigger does nothing, all it does is get pulled, no sounds no nothing. You may remove the scope by simply sliding it into its placeholder, perhaps the gimmick here is that its just too big for a human hand. I have pretty large hands and when i grip this gun, its still pretty tricky to grasp, I have to extend my finger all the way to pull the trigger too. Its scope isnt see through, since it has a red lighting system, pressing a button on the side of its 'knobs' triggers this, I'm pretty sure its for his cannon fire effect, unless people blind themselves when looking through scopes nowadays since its in no way a laser sight, its effect is spread out, not concentrated into a beam. Oh yes, notice theres no orange cap, its pretty odd though, its a real gun design of the walter p38, but the nozzle sort of takes much away from the gun's authenticness, must be the modern designs that deduce this feeling from me, a nice bit of detail is shown here also, his chest, or rather the barrel's side, has a metallish (cant be confirmed, but I'm pretty sure its plastic.) 'raked' feel, like how the side of a metal sheet should feel like.. Another note, dont worry about its weight... its light, no good for clobbering people in the back of the head with.

Transformation is great, its very very challenging, but scary as well, why? First of all, alot of these parts are VERY loose. Second of all, its construction looks so flimsy and yet so complicated as well, theres this part in the arms that you have yank them out, but looking at its part holding it in place, you'd be afraid to break it apart. I already had an accident, a very horrifying incident that is best summed up in a picture. 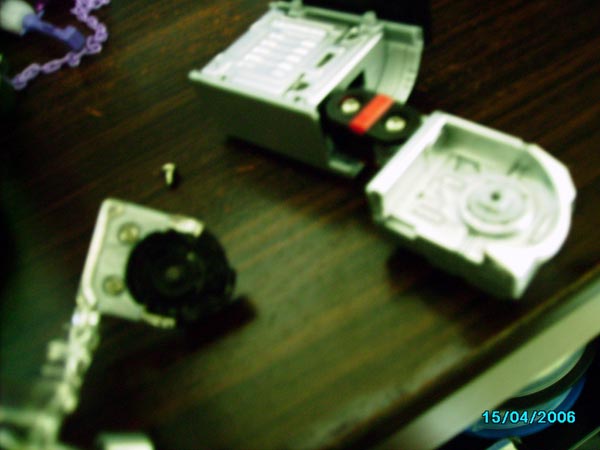 Yes, its bloody arm popped off, the tiny miniscule screw popped off from within while I was undoing his arm from his torso, needless to say, I was shocked, I was so freaked out I ran and grabbed my repair kit, screwed it back in, and its fine again. But what I'm afraid of is this: Is it that the screw was not put in properly, or did the grooves of the screw simply become weak and/or chaffed? Time will tell I guess.. Transformation, I'll give it a 10, very challenging and innovative, theres a sexy 'automorph' feature in this as well, its stomach area collapses and extends when you pull his chest up or push it down, pretty neat. Its difficulty level however, is a 15 out of 10, why? basically this, you are scared to death to transform it, unless you have alot of money I guess. 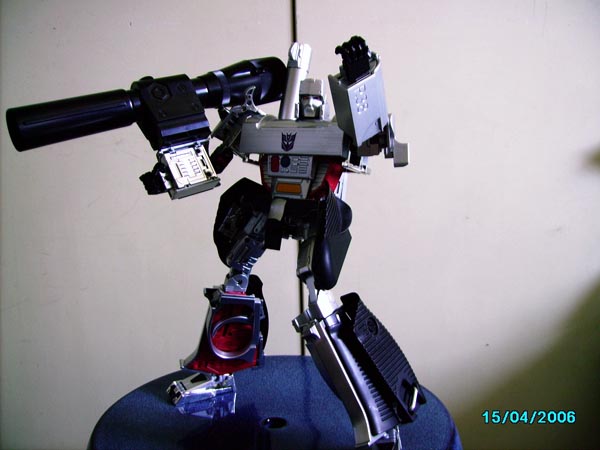 Now, observe this picture.. and let me tell you.. the only diecast here.. is the feet. I'm not kidding. If I was wrong, then fine, I admit it, but from what I feel about the entire body, thats it, the feet are the only bits of die cast in the entire toy, well, maybe aside from the screws... Another annoying part about its design, is that alot of it is compromised of ball joints. The shoulder, calf and hip plates have these parts, and what I hate about them, is that they are VERY loose. Just moving a part might pop these plates off. Its thumb is also ball jointed, and yes, loose as well, plus his thumb is so long that it just looks out of place, but hey, Cybertronians are an alien race, I wont be racist. His scope is just too big, you can hardly lift it up straightforward unless its leaning to its side too, why? Basically his nozzle that sticks out the back of his shoulder blocks it, its just his scope being way too big.. His legs, ok, heres where it gets stupid.. they're not too thin, I dont care what the whining was about, but its mechanics.. ok.. thats where I have a problem. 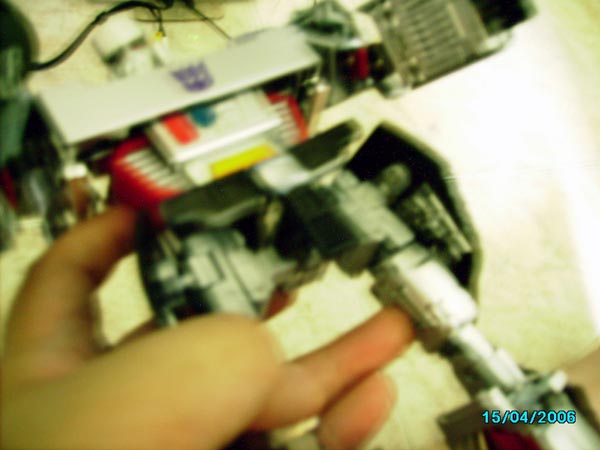 I know its a blurry picture, but observe its crotch, no not in that way you dork, but observe how its made, he practically has no sideways leg movement, the only way it does is to chaff the plastic joints within when you do so, otherwise no, its hip joints for his legs only let him move front and back. Oh, another point about his legs, is that his calf plates sort of just hang there, there are ports where you plug small bits of jutting plastic into, but it hardly holds, AT ALL. So it just leaves it hanging really. 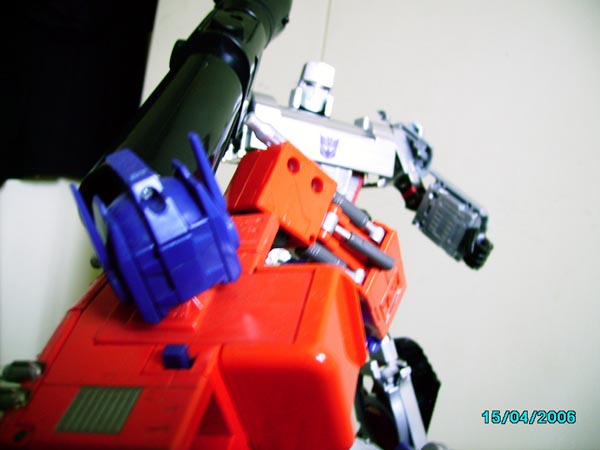 Its articulation, well, to count joints that allow articulation, in each leg, he has 6 points of articulation, his arms have 5 points each with his fingers each being able to move each digit only, and his overly large thumb is a ball joint. The head has one, it seems to be a ball joint, perhaps the second joint is his forehead, because it can lower over his eyes, and show off that little 'cap' he has, you could also add his face as a joint, since its being able to be pushed in, like he got punched so hard or something. Now onto poses, well, alot of his kibble makes him hard to pose, without popping a plate or something, his legs give very little leeway as well, he cannot kneel, but I guess Megatron never kneeled except in the movie. Plus his hips dont move as well, so dont expect much, its decently articulated, just not enough for the masterpiece line. (Using Prime and Screamer as reference.)

Its accessories are pretty fun I suppose, well, theres the flail, shown in the picture, which, if Megatron had used in the actual show, would probably make Megatron curse and swear. Why? The chain is pretty long, nay, ITS WAY TOO LONG. If its doom ball were bigger, it might work, but basically when you compare a flail's weapon design to this, you kinda wonder.. Anyhoo, you put his hand back into his forearm, then you make sure his forearm plate is raised, then you insert the stock's grip onto his wrist. Theres also his sword, or rather, dagger, which was used in the 1985 classic movie, which basically is a light saber, you can even pull off the energon blade from its stock. Theres also his gun that was also used in the movie, I wonder if during that scene was rigged, since both weapons are decidedly the same color, anyway, both weapons can be gripped in his hands, just a matter of how you grasp it, but its fine, they wont fall out. 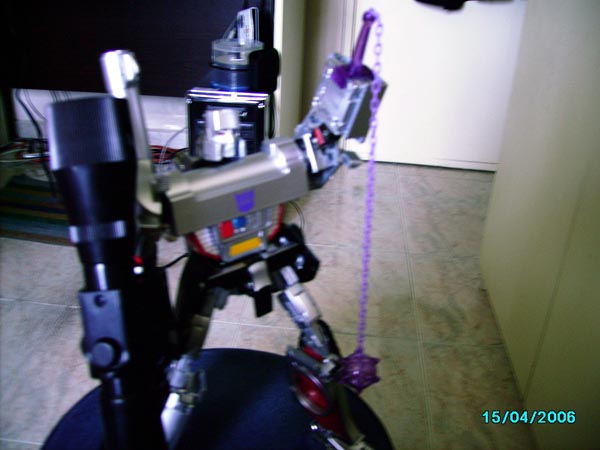 Do I like the toy? Yes. Is it perfect? No. Far from it. The quality control leaves alot to be desired. I recommend this toy, but I dont think its a 'must have'. Cest la ve. Maybe they hate Megatron now, after all, he's a girl licking pervert in kiss players and has a face that looks like it was constructed out of broken glass as well as a horribly disfigured 'stealth bomber' mode in the upcoming movie. 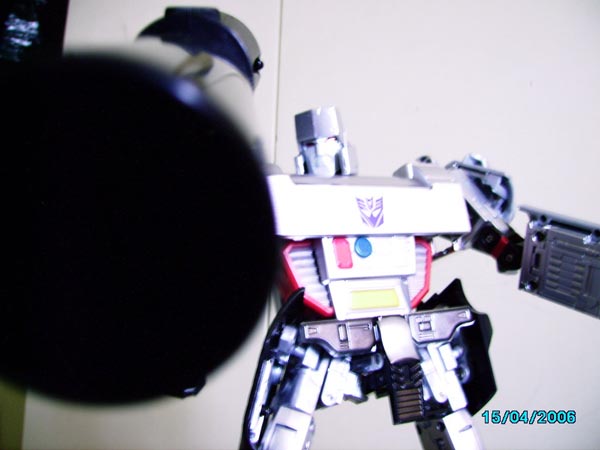