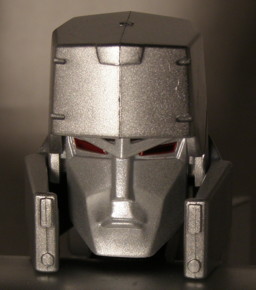 In 1938, Walther created the P38 hand pistol. It was revolutionary at it's time being that it was the first double-trigger action pistol of it's type in production. It underwent several modifications during WWII while the German army employed it's use. After the war, it disappeared until the Walther plant restarted production in 1958. The pistol was mostly used by West Germany police forces and was manufactured until the early 1990's. While the pistol was rather plain and mostly black, a modified version was made with a shoulder stock, sight and silencer for the TV series "The Man From U.N.C.L.E." which aired in the mid-1960's. Why am I blathering about all this? Hang with me here, it's building up.

Takara had a Walther P38 as a mold for their MicroMan lineup, known as GunRobo12. This was an all black gun with a wood grip, which was closely in follow with the actual gun. There was also an alternate color, GunRobo13, which was gray in color with a black grip. This version, paired with the U.N.C.L.E. modifications, eventually wound up being the basis for G1 Megatron. All the GunRobo (and Megatron) units came with a Dimension Sword and an Automatic Laser. Megatron also had the feature of having the stock, sight and silencer combine to form a Fusion Cannon. However, with the animated series appearing, the fusion cannon was actually his sight which mounted on his right arm. The stock and silencer, like Optimus Prime's trailer, went into limbo when he was in robot mode. The G1 version of Megatron has long been a fan favorite for many years. While the figure was a bit qwirky looking, it nonetheless remains a hot figure to find.

When Takara released the Masterpiece line with Optimus Prime, many fans were hoping that Megatron would soon follow. Unfortunately, MP01 Prime was followed by MP02 Ultra Magnus, a repaint of Prime. Hope again surfaced with news that Starscream would receive the Masterpiece treatment. Soon after that, it finally came. News surfaced that Megatron would be represented as the next new Masterpiece mold. But wait! News also stated that he might have the dreaded orange plug due to US toy safety laws! Fortunately, for the most part we have been spared the orange plug. Now, finally, after 23yrs of waiting, Transformer fans everywhere can rejoice at the release of a more anime-accurate Megatron. 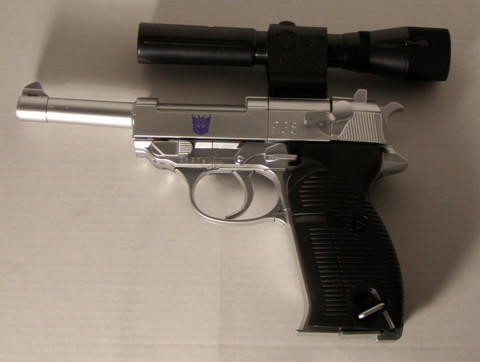 For interest's sake, I looked up the dimensions for a Walther P38. Barrel to hammer, the real version measures 216mm (9-1/2" roughly). Megatron in Alt mode, barrel to hammer, measures 280mm (11" roughly). Therefore, this is a 4/3 scale mockup. It is done very well. I took the time to look at a few photos of the P38 and while there was never a silver version, nonetheless the details are very spot on. The hand strap is on the left side of the grip and all the levers and pins are represented. 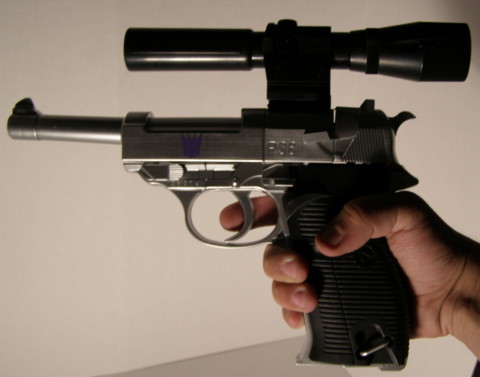 You'd almost have to wonder how anyone could mistake this for a real weapon given it's size. It barely fits in an adult's hand. The trigger does operate, but it doesn't have a gimmick tied to it at all. While not having the shoulder stock and silencer options, Megatron still retains the sight (something that wasn't offered on the original P38). Don't bother trying to aim with it, it's nearly impossible to see through. There is an added feature to the sight, but I'll go into that later.

This has got to be the most complex transformation ever. There are many, many twists and turns to this. Make sure you take your time transforming this figure. Fortunately, the parts that get in the way the most (top of the grip, hammer assembly) pop off and on with ball joints. It's not overly difficult but it is very involved. Most of the parts are plastic. The feet and arm spindle assembly are the only bits of die-cast, so it's rather light to handle. 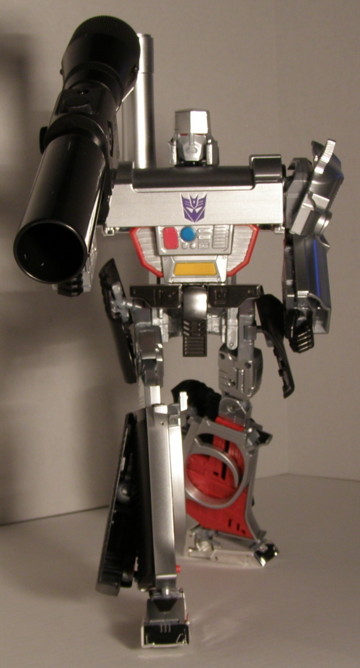 Megatron's Alt mode is just a sight to behold. While some have stated (including myself) that the legs looked thin and spindly, they work quite well in person. The arm cannon is all plastic and does very little to disturb the balance of the figure. There is a button on the arm cannon which, when pressed, will give the barrel of the arm cannon a nice red glow, like it's about to blow. It's a nice touch. Megatron's eyes also have red piping ability. The main improvement of this figure over the G1 figure is the omission of the 'trigger crotch'. To escape this problem, the trigger assembly splits in half and folds into the inner calves. The barrel also folds on the right side of the back to be anime correct. 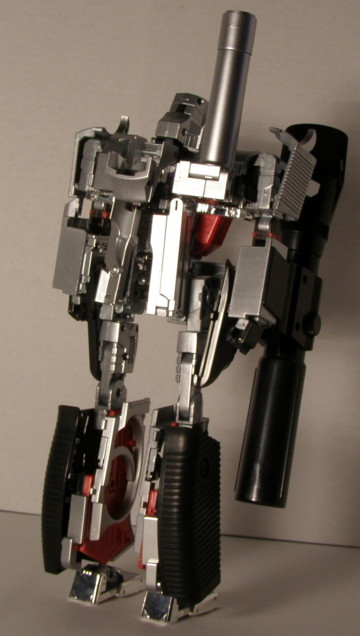 Like Masterpiece Optimus, Megatron has an assortment of accessories. These include an energon sword, energon mace, hand pistol and the character Kremzeek. 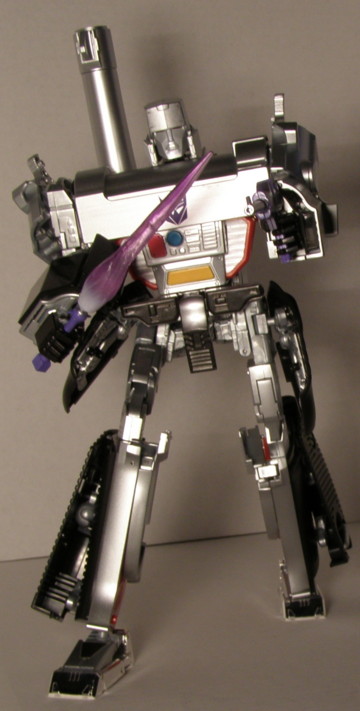 The energon sword and hand pistol is in reference to TF:TM. This was the pivotal battle between Megs and Prime that ultimately left both mortally wounded. The energon sword was used to make the initial gash in Prime's abdomen. The sword is removeable to show only the base, a very nice touch. The hand pistol was used to inflict the mortal blows to Optimus Prime. It is accurately detailed. 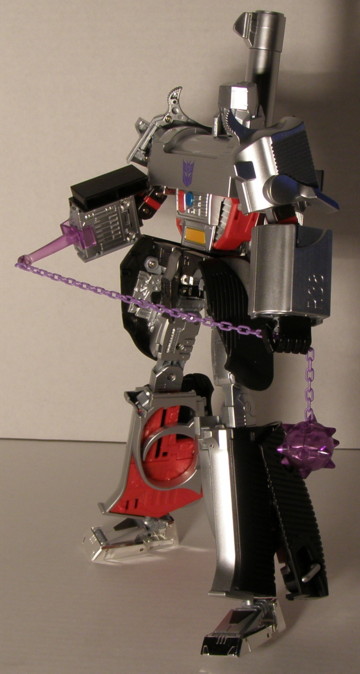 The energon mace is in reference to More Than Meets The Eye Pt II, the pilot mini-series. While Prime retracted his right hand for an energon axe, Megatron retracted his right hand for an energon mace. The mace is all translucent plastic and is chain linked. This makes for a great effect and gives you alot of options to pose it with Megatron. It mounts the same way as the Axe mounted on Masterpiece Optimus. 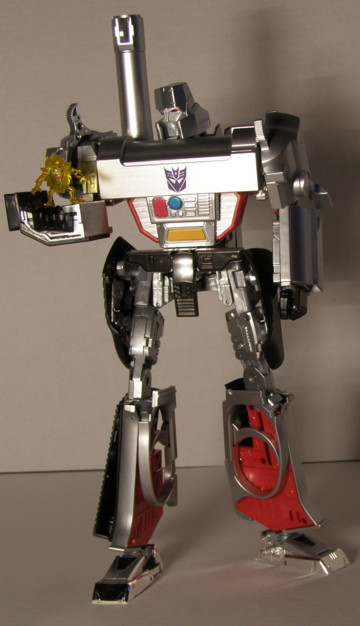 Kremzeek is in reference to the Season 2 episode "Kremzeek!". He was the creation of Megatron that fed off of energy and overloaded anything electrical. He is done in translucent yellow with red eyes and mouth. He has the same hellbent expression he kept throughout his only featured episode.

With an average price of $90 for this figure, not including shipping, it is a very pricey consideration for the collection. However, we have to keep some things in mind. For one, it is very doubtful that Hasbro will release this for US release. It is surprising to begin with how it could be imported without the plug. Second, this is more than likely the most accurate G1 version of Megatron that will ever surface. Lastly, contrary to prior reports, this figure is better built and sturdier than has been credited. The worst parts to come off are the shoulder and hip plates, but as mentioned they are ball jointed and pop back in very easily. With recent news of an aftermarket stock and silencer in the works, the perfect G1 Megatron is now within the grasp of TransFans everywhere!