The following review is for perhaps the most controversial character in the movie: Megatron. There has been a lot of bashing and a lot of defending for this design. I will admit that I had been warming up a bit for the design, as it seems to translate real well on the screen. However, does it hold up as well as an action figure? 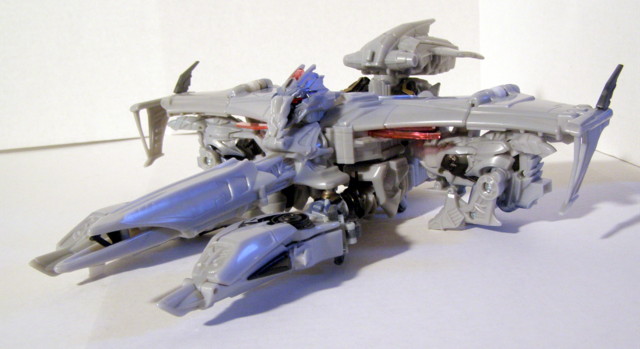 Megatron never assimilated an earth mode for this movie. He is designed supposedly as a Cybertronian jet. However, I find it to be a crude cross between Gundam-01's Bird mode (Gundam Wing) and Spike's Swordfish craft (Cowboy Bebop). The paint job is actually done nicely here. Mostly silver, there are various fadings into an icy type of blue. Perhaps this is to simulate the damage done to his armor during his eons long deep freeze. He has 4 landing wheels built into his belly. 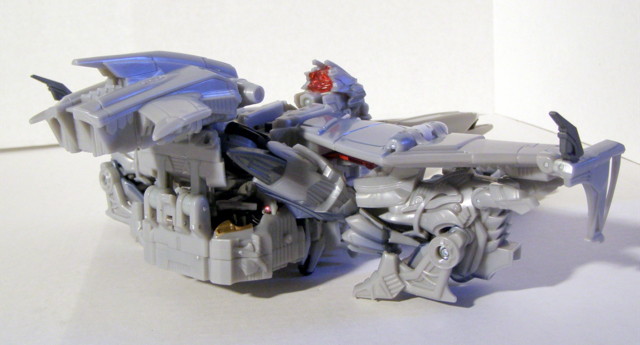 In my years of being a Transformers fan, this is utterly (in my opinion) the WORST alt mode I have ever seen. It certainly isn't befitting of Megatron. The kibble factor of this mode alone is enough to be frustrating. The head is hidden by a flap that doesn't even bolt into place. The legs are crudely folded underneath the fuselage. The aft section looks out of place. It's also too bad they included batteries on this figure. The trivial light show and alien type scream are annoying at best.

Getting him into alt mode isn't terribly difficult, but the instructions are abysmal. The legs involve several twists and incorporate the first Automorph gimmick. Snapping the lower legs into the knees will form the feet. The next automorph happens as you line his back in place. This will automatically fold the wings back. His last Automorph is similar to Prime's. Releasing a catch on his chest will bring up some red claws and cause that irritating scream to be heard along with some lights going off on his chest. 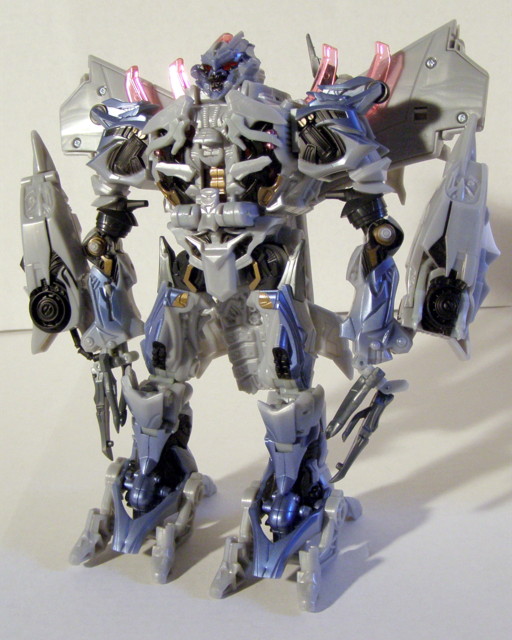 I admit that I was one of the original detractors of Megatron's robot form. However, in person it's not terribly bad. Looking at it is just creepy. Especially the head. The red piping really gives it a look that screams "You're gonna die!" More blue shows up in this mode, as well as more gold. There's not much to fault with the robot mode as far as looks, but he is back heavy. His feet aren't too stable either, so he can teeter on you some. 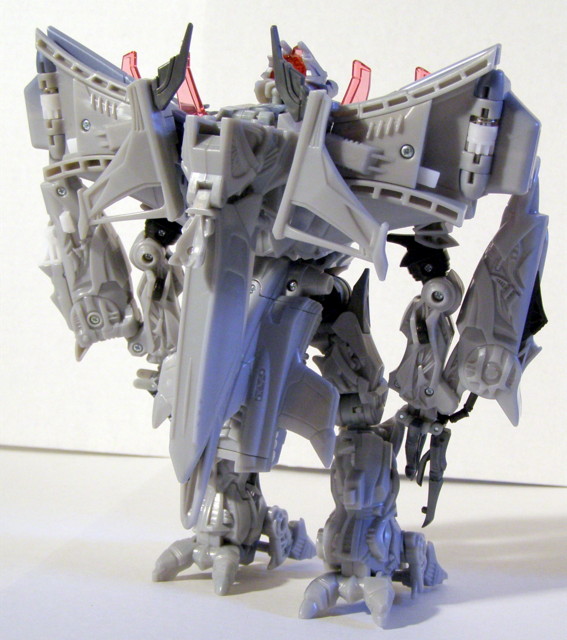 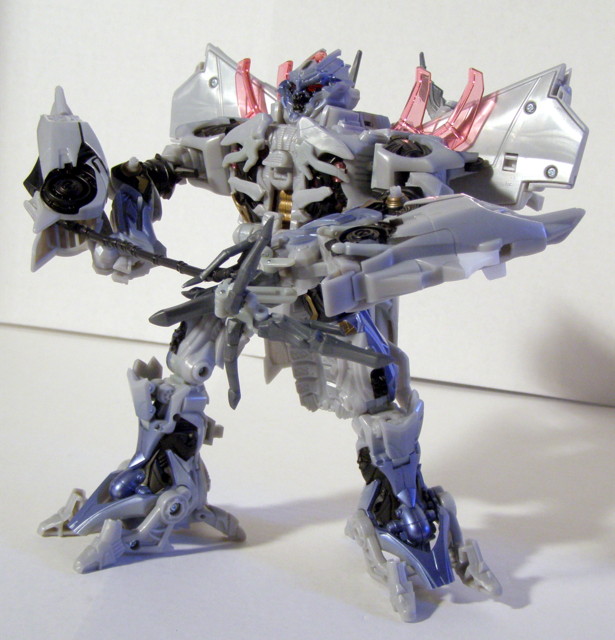 Megatron has 2 gimmicks in Robot mode. His right hand can form a chain claw. I don't know if this is a QC issue or not, but my hand didn't launch. It looks like it's supposed to, but it doesn't. Without the launch feature, it's a pretty lame gimmick. The other gimmick is that both arms can 'combine' to form a fusion cannon. I encountered 2 problems with this. First, the arms don't combine, the elbows just lock together. Big whoop. Second, the lever to morph the left arm into the fusion cannon WAS spring loaded and therefore retracted the second you let go of the lever. My suspicion is that the spring went in the wrong hand. Nothing a screwdriver can't fix.

The thing that drives me nuts is that this figure costs $45! If it was an Ultra, I might be able to justify the cost. However, between the afterthought of an alt mode, the QC issues and the flawed gimmicks, this is a waste of money. Wait for it to go on clearance.