Inevitably, with every major movie release there is a plethora of merchandising. Part of that merchandising machine for the upcoming Transformers movie are board games. Makes since being that Hasbro is for all purposes the board game king since buying out Parker Brothers and Milton Bradley many years ago. I was recently sent 3 of the board games. The first look will be at one of my favorite games, Chess. 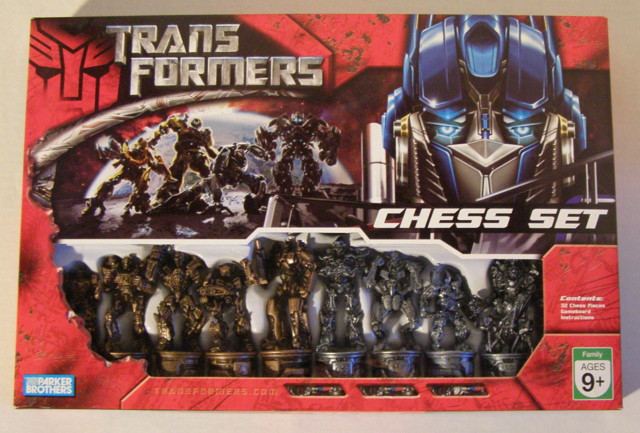 The box is a typical cardboard type. The front cover has an image of Optimus Prime with the rest of his team to the left. Interesting that no Decepticons are featured. The box features a clear window where you can see the main pieces. The age range is listed as 9+ although I don't know how many children will envelope themselves in this game, since it's not electronic or anything. The bottom of the box is all white. 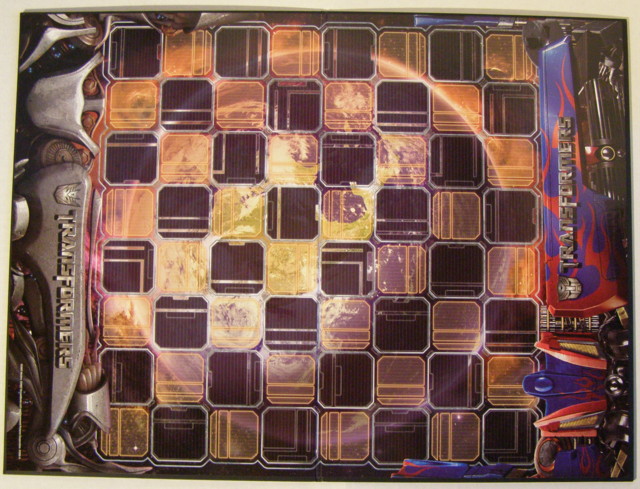 The board is also typical of boardgames, being a stock cardboard. The playing side is glossed and a nice graphics array. For those who are confused about what army goes on what side, Parker Brothers has made it easy. On one side, you can see Optimus Prime's body art for the Autobot army. On the other side, there is Megatron's armor showing for the Decepticon army. 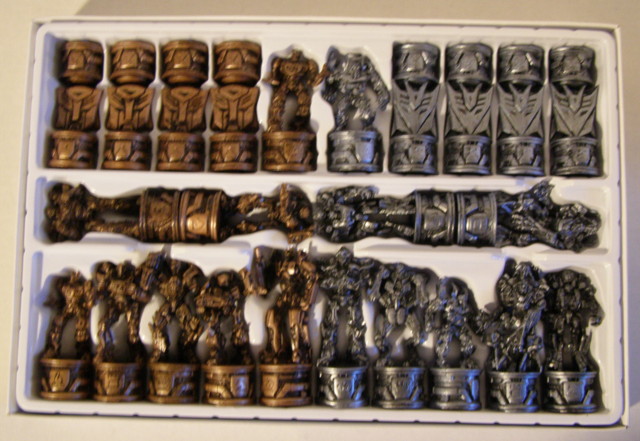 The pieces are done in rubber. The Autobots are in a copper hue while the Decepticons are in a silver hue. On the base of the pieces is an insignia declaring their duty on the chess board. Pawns are the faction insignias.

The rules are the same as in chess. The object is to capture the King of the opposing army. For those who are not familiar with Chess, I will give a brief overview:

Pawns can move 2 spaces forward on their first move. After that, they are only allowed one move forward per turn, they cannot move laterally. There are 2 exceptions. To capture, the pawn moves one square diagonal if an opposing piece occupies that square. There is also a move called "En Passant", where if an opposing pawn makes a 2 square move and your piece is perpendicular, you can make a diagonal move to occupy the square that the opposing pawn skipped, therefore capturing his piece.

Rooks can move unlimited squares, but they can only move on an axis. They cannot move diagonally. There is a special move that the Rook can coordinate with the King, but I will describe that later.

Knights move in an L pattern on an axis. Knights cannot move diagonal, per say. They can move one square on one axis, then 2 squares on the opposite axis and vice versa. Knights are the only piece allowed to "jump" over another piece to make it's move.

Bishops can move unlimited squares, but only diagonally. They cannot move on an axis.

Kings are the pivotal piece of the game, but are the most limited. They can only move one square per turn, but they can move in any direction. However, Kings can not move to a square that commits them to a Check or Checkmate position

Should a pawn make it all the way to the end of the opposing side's board, they pawn can be promoted and made into any piece EXCEPT a king. Therefore, it is possible to have 2 or more queens on the board.

The king is placed in "check" if, on the next turn, the king can be captured. The opposing side must call out "check" or the checkmate is invalid come the next turn. When a king is in check, the player at risk MUST move their king to safety.

If the opposing army corners the king to the point where it can no longer move without being captured, the king is in "checkmate" and the game is over.

Normal retail for this set is $30. The pieces seem durable enough but the game board may not fare so lucky. The packaging definitely won't withstand constant use. However, you could easily pay 5 to 10 times as much for an actual metal set with a quality board. The pieces themselves are done in very nice detail for being a single color. For those who are avid chess players, this is worth considering. For those who have no patience for stratagem, this is a nice showpiece if left wrapped. I leave you with the cast of players for this game.