In part 2 of 3 relating to the board game frenzy Hasbro is feeding the public in respect to the movie, we look at Stratego. For those who have not played, this is basically Capture The Flag as played at the family table. 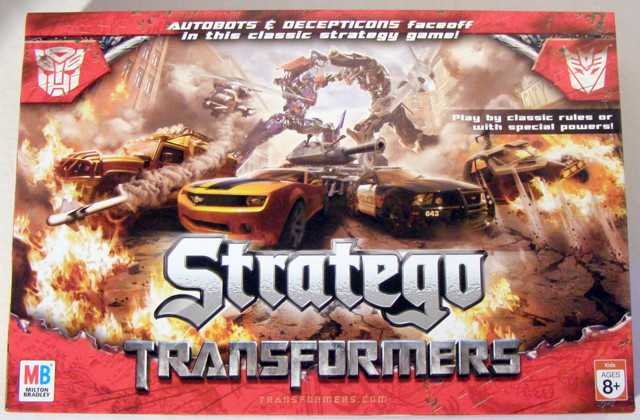 Milton Bradley was the original creator of this war based board game. The box art is pretty spiffy with Optimus Prime and Megatron fighting it out in robot mode while the soldiers race toward you in respective alt modes. Note the box says there are 2 modes of play. We will get into that later. 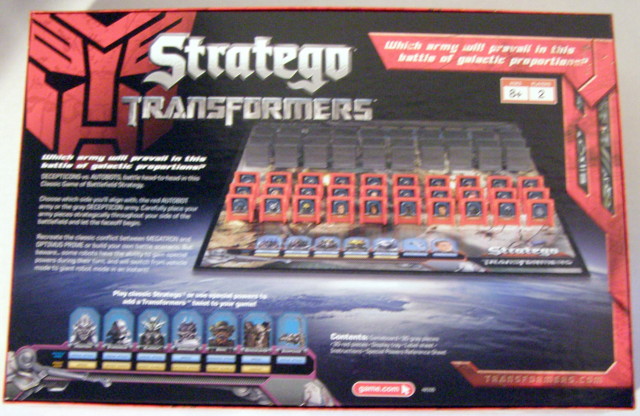 The back of the box features the basic gameplay plus hints at the 'special' game rules. Again, more on that later. 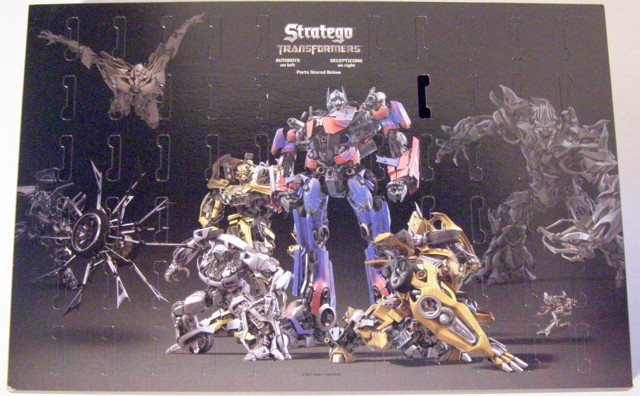 Inside the box, there is a special insert used to hold the captured pieces. Depending on your capture rules, this insert may or may not be used. Unfortunately, one of the chads seems to have fallen off. Maybe this game was made in a factory in Florida? Bad joke, I couldn't resist. You will also find a minimum of 30 game pieces (mine had a few extra) along with the respective ranks in the form of stickers. Place the stickers on the respective pieces. The bottom half of the sheet is for Autobots (Red pawns) while the top half of the sheet is for Decepticons (Gray pawns).

The flag (which must be capture are the faction insignias. The other pieces are shown below: There are also common pieces between both armies:

As mentioned before, the object is to capture the opponent's flag or force the opponent to have no available moves left. There are 3 areas of the board. One side is Autobot, one side is Decepticon. There are 8 squares toward the middle that look like they are being bombed. Those are known as the Forbidden Zone. Before starting, both players must agree how pieces are captured. There are 4 options:

1) Open Play - All pieces are shown face up in prison for easy tracking.

2) Prison Play - The player which captures a piece lays it face down so the victim cannot track it.

3) Secret Play - The player which is attacked keeps his piece face down so the attacker cannot track it.

4) Stealth Play - All captured pieces are kept face down, which makes players rely on memory.

Before playing, each army lays their pieces on their side of the board with the rank facing them. Note that flags and bombs cannot be moved once placed on the board. Therefore, part of the strategy is to lay the pieces in ideal locations. The Decepticon army always starts gameplay.

Each piece (except where noted) can advance one square on an axis. There is no diagonal gameplay allowed. You cannot jump over pieces nor can you occupy the same space unless you are attacking an opponent. You also cannot jump over or move onto the Forbidden Zone.

Exceptions include the scout (rank 2). The scout can move infinitely, but ONLY if the player turns the pawn to reveal that the piece is a scout. The scout can move one square at a time without revealing it's identity. The scout is also barred from moving onto or through the Forbidden Zone.

To attack a piece, you must first tap an opponent's piece once you are alongside it. That piece is the revealed to the victim. In turn, the victim reveals their piece. This is how the rank comes into play. The piece with the higher number automatically wins. If both are equal rank, both are taken out of play. The only exception are with the bombs. The bomb will capture the assailant and also remain in play. This is a valueable asset and therefore bombs are a smart choice to guard the flags. If the assailant wins, he takes over the victim's square. If the victim wins, he keeps the square he occupied. You do not have to attack an opponent if you feel the strategy is not right.

An exception to the attack rule are the spies (Frenzy/Allspark). The spies have no defense. Therefore, if they attack (or are attacked), they lose on the spot... EXCEPT if they are attacked by a rank 10 piece (Optimus/Megatron) in which case the spy wins. Also, if spy attacks spy, both spies are removed from gameplay.

This version of Stratego has a "special powers" gameplay option where you can take advantage of the Transformers' ability to... well... transform. In this game mode, all Transformers start in Alt mode. You can 'transform' into either mode at the start of your turn, but you cannot do so at the end of your turn. Special powers can normally only be used in Robot mode except when listed.

Detect Enemy - When in robot mode, you can command an opposing piece up to 2 squares away (not diagonally though) to reveal their rank.

Speed - Available in both modes, you can move 2 spaces at once. You cannot move diagonally and if you intercept a piece on your first square, you forfeit the 2nd move and go into attack.

Distance Strike - In robot mode, if you have a clear shot of an enemy 2 pieces away, you can attack. If the piece is of lower rank, it is captured. If the piece is of equal or higher rank, the attack is not counted. You cannot use distance strike to attack through Forbidden Zones.

Magnet - In robot mode, you can draw an opposing piece up to 2 squares away to you. If it is of lower rank, you capture it. If it is of equal rank, both pieces are lost. If it is of higher rank, you are captured and the victim takes over your square. Magnet does not work on flags.

Sneak Attack - In robot mode, you can move an infinite amount of squares in a straight line (no diagonal moves) to the next available empty square. This is the only time you can move through the Forbidden Zone. However, you still cannot land in it. If an enemy is adjacent, you can then attack it.

Call Bumblebee (Autobots only) - Sam can call Bumblebee to his side so long as there is an empty square next to him that is not a Forbidden Zone square. To do this will also reveal Bumblebee's identity (meaning the piece will be laid face down). Once Bumblebee is moved next to Sam, the turn ends.

Stratego is a game of wits. Adding the special powers game play to it makes it even more interesting. A cool spin to a classic board game.