I saved Risk for last because... to be honest... I have never really played the game. Hopefully this won't hinder me from figuring it out and giving a proper score. I do know that Risk is a global conquest game and has surfaced many times in many different forms. The object is to overtake Cyberton in 6 Days and gain the most zones. 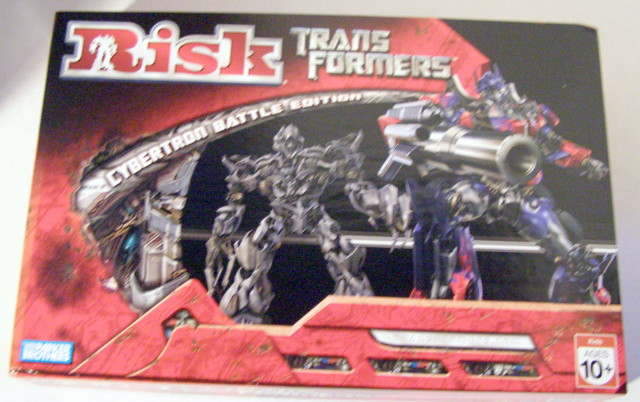 The box has both Optimus Prime and Megatron in poses with Optimus showing off his blaster. Pretty simple. 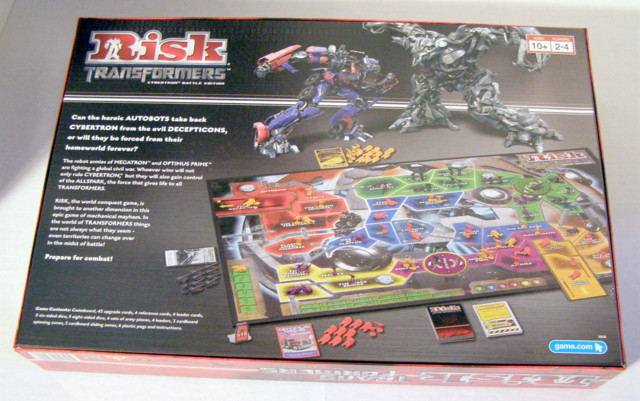 The back of the box shows the board in play along with the basic premise of the game. 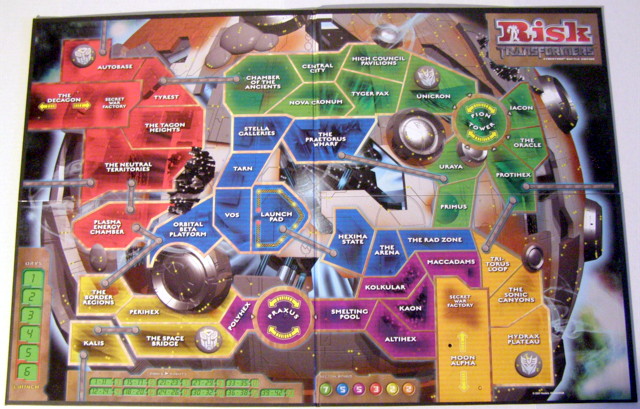 This is perhaps the first time that all of the zones of planet Cybertron have been showcased on one space. Everything from Iacon to the Plasma Energy Chamber to Kalis is represented. 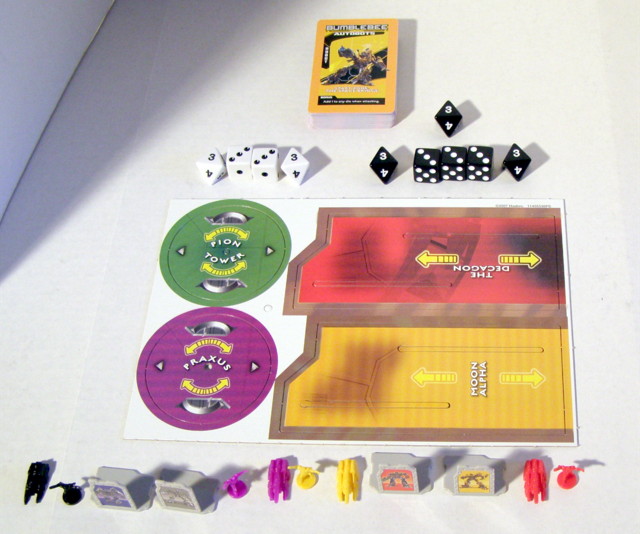 There are a score of pieces that go with this game as well. 2 sets of die, both 6 and 8 sided, are included. There are also the 4 main game pieces. You can choose between Optimus Prime, Bumblebee, Megatron and Barricade. Each main piece has an army of smaller pieces at it's command. There are also cardboard cutouts for certain zones.

I am going by the instructions here, so hopefully this is accurate. This is not a standard game of Risk, but one tailored for battle on Cybertron. Differences include:

1) Gameplay elapses over 6 days (rounds) Each day, each player gets one turn.

2) Territories are now zones and continents are now sectors.

5) Leaders (the 4 main pieces) can switch between alt and robot mode and have special powers based on which form they use.

6) Sealines are now known as hyperlinks.

7) Cards offer upgrades to the players.

To set up the board, place the sliding zones (Moon Alpha/Decagon) and the spinning zones (Praxus/Pion tower) in position using the plastic tacks. Choose between 2 to 4 players, than choose your leaders. Each leader starts with 30 drones. There are 3 different modes of play:

2-Player (Head to Head) - One Autobot vs One Decepticon

3-Player (Free For All) - One Autobot vs Two Decepticons

Each leader has a start point and is granted one drone to start with on his space. The start points are coded by color and faction. Starting with the youngest (or roll off) player, each player takes a turn placing one drone on each zone. There are 42 zones in all. Once all zones are filled, you can then place additional drones on an already 'controlled' zone until all 30 drones are spent. Each player gets a reference card. Upgrade cards are then shuffled and placed face down. Finally, the first player in queue places one of the drones from the 'scrapheap' (which is the leftover drones subtracted from the original 30) on Day 1. Play then begins.

During gameplay, if you capture a zone you win an upgrade card. Any destroyed robots return to the scrapheap. Zones must always be occupied by at least one robot. You can trade in 3 infantry for one calvary during your turn, or vice versa.

I'll leave it here. The game looks very complex yet interesting to play. The pieces are done up well and the board is fabulous. If you're a Risk afficionado, this game is right up your alley. Even if you're a rookie like me, if you like long games involving strategy and roleplay, this is worth the money.