I just returned from BotCon 2007 and I thought it was a good show. I bought the Primus package which included the Games of Decepticons boxed set. At first I was hesitant. I mean, $330.00 is alot of money. However, after seeing everything else I got from the experience, I am happy with my investment. I will have a series of 10 reviews forthcoming in the next few days detailing all the exclusive figures except the whiffleball... er... Vector Sigma figure offered. I will start with the exclusive set. 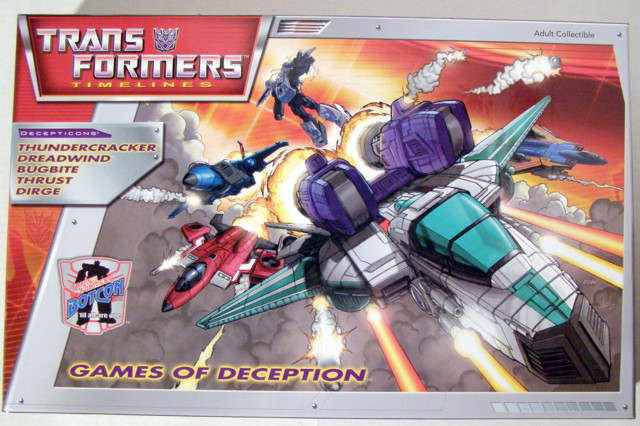 The box is extremely sturdy and features artwork depicting all the characters offered in the boxed set. This would include the remaining original G1 seekers (Thrust, Dirge & Thundercracker) as well as Bugbite (Classics Bumblebee recolor) and Dreadwind (Classics Jetfire remold). 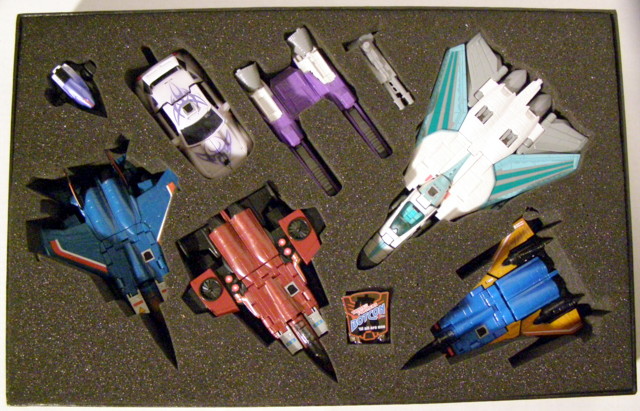 Within the sturdy box is a foam insert holding the 5 figures in place. Also included is an exclusive BotCon 2007 commemorative lapel pin. You could only get this pin with the boxed set. Also included below the foam were individual tech specs and instruction manuals. Surprisingly, instead of taking the cheap way out like TFCC has in the past, the instruction sheets are all new with the Transformers Timelines logo imprinted. Now that the box itself is covered, I'm going to jump right in and get to the single most desired figure: Thrust.

"I'll wash my actuators in your spilled lubricant, weakling."

FROM THE TECH SPEC: Warrior - Perhaps it was for no other reason than he was the last of all Decepticons to be re-activated by Megatron, but when Thrust was presented with the opportunity, he was eager to join Bludgeon's faction. Honestly, crazy old Megatron scares the coolant out of him. He'd rather be part of a nice, big army; where he can be surrounded by weaker bots and push around the locals of whatever planet they occupy that week. 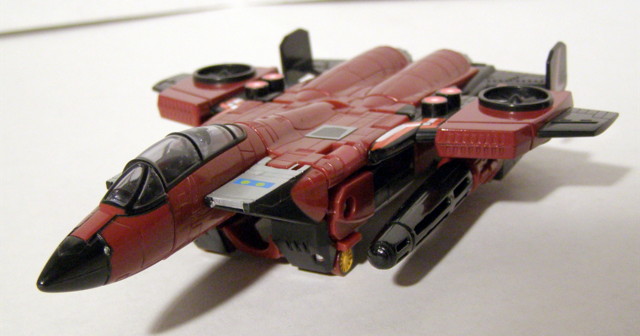 Thrust's alt mode is molded after Classics Starscream. His paint scheme is mostly maroon red with black detailing. The biggest difference between him and Starscream is in the wings. 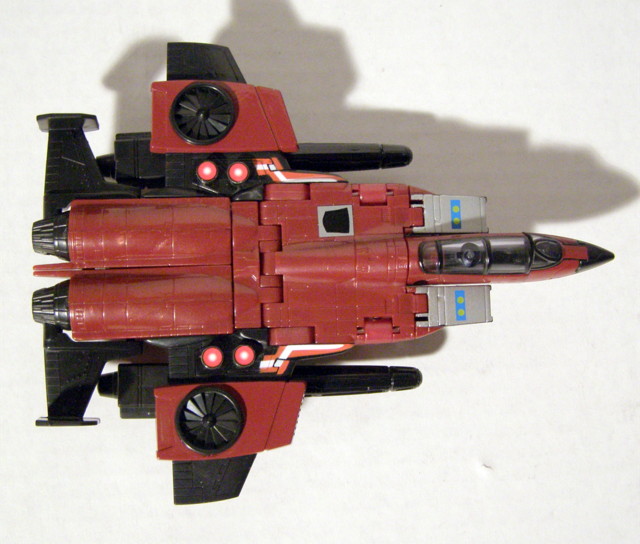 The wings have been remolded to match G1 Thrust. That is, they incorporate VTOL (Vertical Take Off/Landing) fins on each wing. These are actually molded into the wings! The tailfins also differ and are accurate to G1 Thrust. 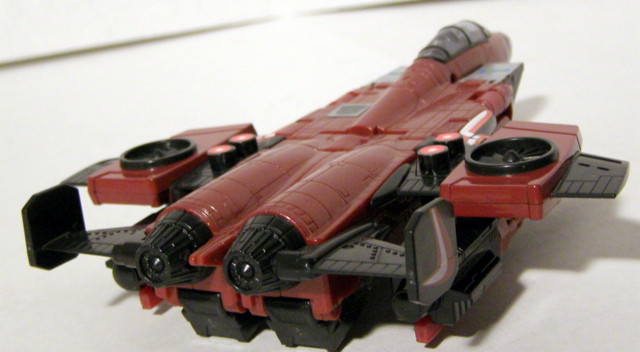 Thrust comes off looking a bit TOO G1. Whereas the other Classics figures freshened up their looks, Thrust looks like he has all the G1 sticker apps applied. Another sufferage is that his head is visible on the bottom of the nose. Another throwback to the G1 figure I suppose. Transformation is similar to Starscream's except that the nose transformation mimics Ramjet. 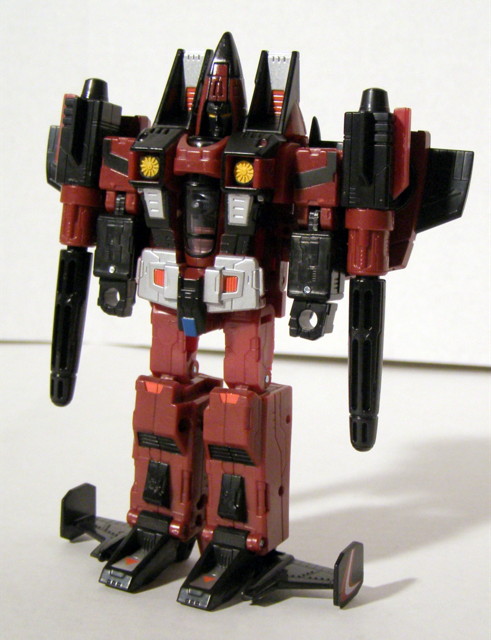 His robot mode is comparative to the other Classics seekers as well. Some blue and yellow show in various parts, but he retains the maroon color. His arm missiles are the stockier type, taken from Ramjet. 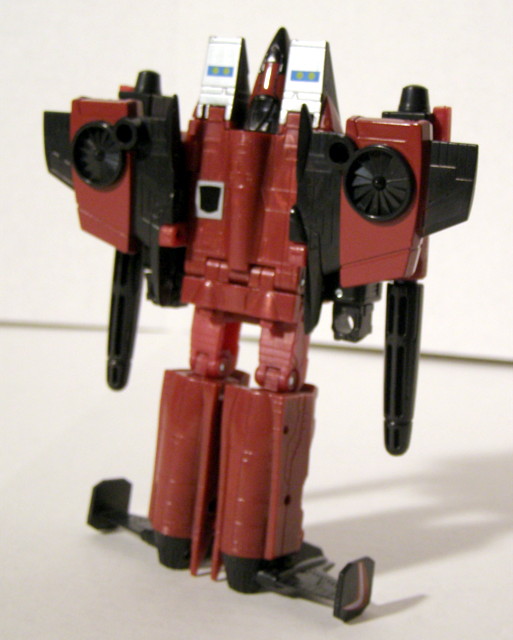 The same small niggles are found with Thrust. The joints are stiff and limited in poseability. You have to work with them a bit to get the post you want. Once you get through that, he is a pretty stable and articulate figure. 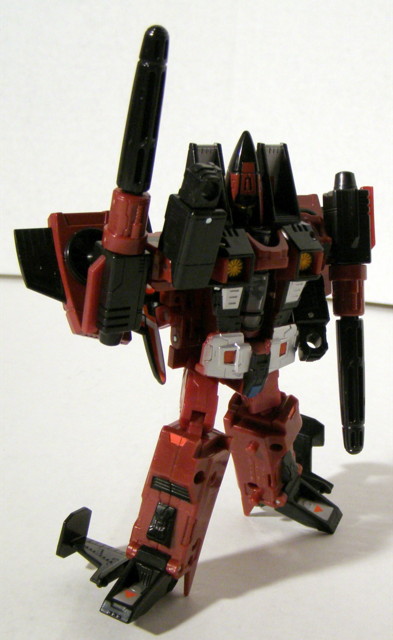 According to Hasbro, making a full seeker set for the retail market wasn't 'feasible'. They didn't want to saturate the market with 6 similar molds and water down the line. This is partially because of the small run for Classics 1.0. Hasbro has said this is as close as one will get to having the full seeker set... possible forever. While the others can easily be repainted, trying to get the VTOL fins on Thrust would be near impossible unless you're good with resin. This will be one of the hottest figures of this year's BotCon to get ahold of. I'm sure eBay is already full aware of that.