We are part 2 of 10 covering the BotCon 2007 exclusives. Time to give the other remolded figure in the boxed set a look at.

"We're doomed. Not that it matters.

From the tech spec:Air Defense - Dreadwind has always had self confidence issues. Fortunately, Darking was there as his confidant and close friend. When Bludgeon assigned Dreadwind to Bugbite's crew, he was quite unhappy to say the least. Now he spends most of his time whining, of how no one likes him and that he is only there to serve as the crew's whipping bot, to anyone that will listen. What he lacks in self confidence, he makes up with his fighting prowess. Once focused, Dreadwind is a formidable enemy both in the skies and on the ground. 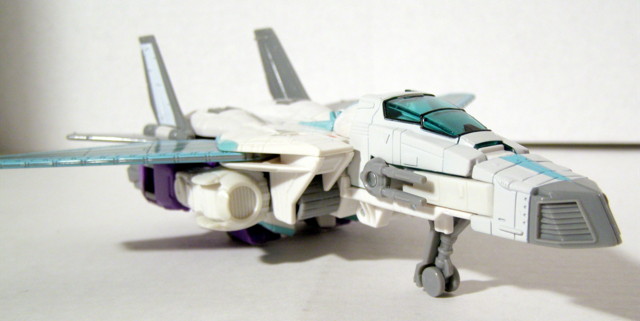 Dreadwind takes his mold from Jetfire and is a jet in alt mode. He is primarily white in color with some purple, gray and turquoise accents on the wings and belly. He has double barreled laser rifles on either side of his cockpit. 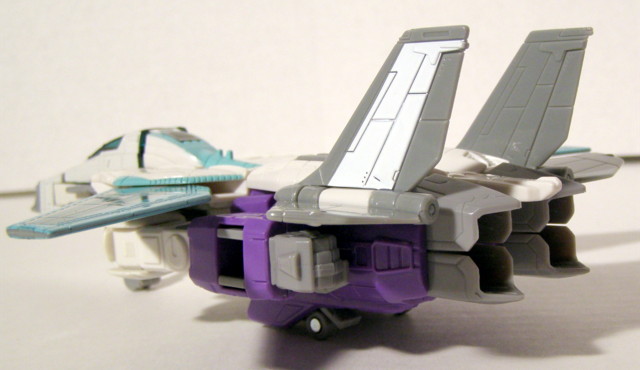 Besides the fists sticking out towards the back, this mode is relatively clean. You can see where the armor snaps on. That's a sacrifice versus using pegs which would look worse when not in use. 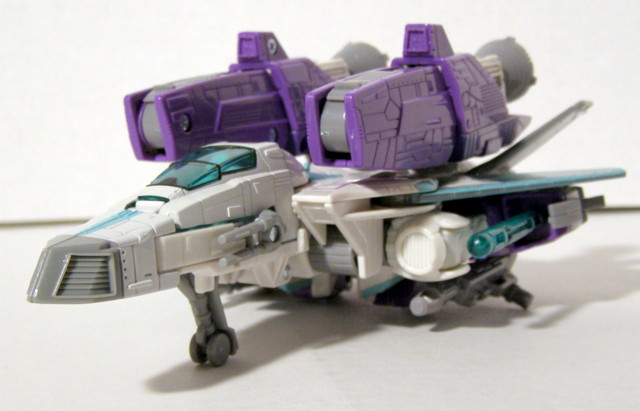 Like Jetfire, Dreadwind adds on some arsenal when donning his armor. As well as getting a boost from the jet booster pack, he also adds missile launchers on either side of the fuselage. The booster and launchers are purple and the missiles are done in translucent turquoise. 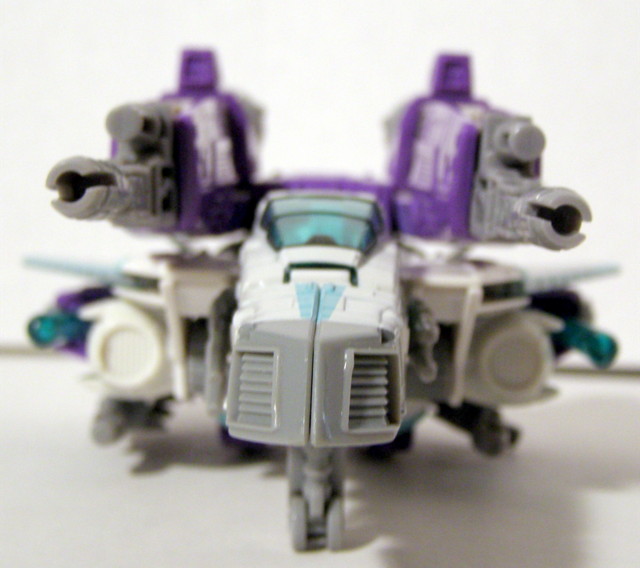 The booster pack can also reveal a cannon on either side by sliding a panel back. This arms him to the hilt. With the armor, this also hides all the small niggles mentioned above. 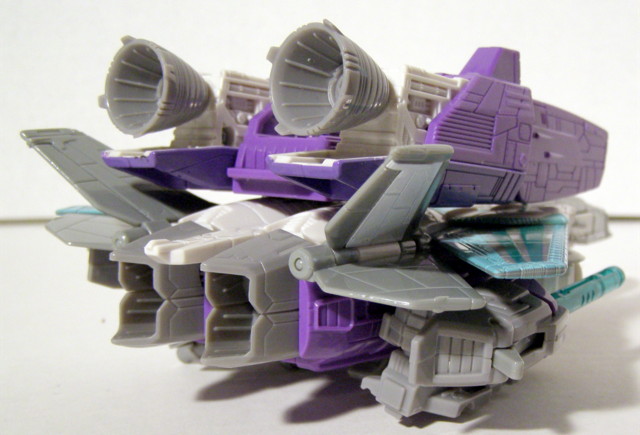 Transformation is exact to Jetfire's. While easier to transform him without the armor on, he is still simple to get into robot mode. 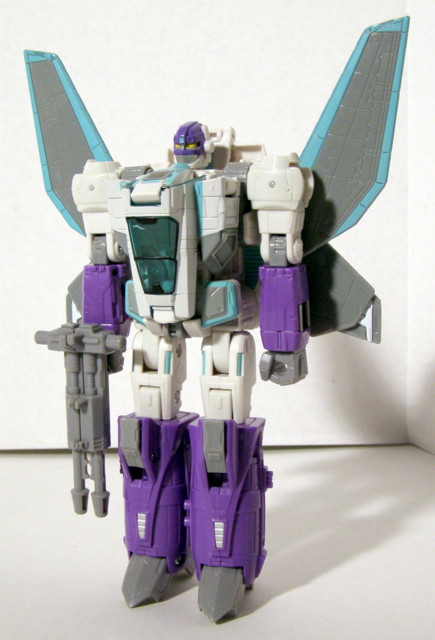 In this mode, more purple shows up in the limbs. Otherwise, white remains the majority color. The chest has the turquoise colored cockpit embedded within. It is in this mode where you can see the remolded head. The head is spot on to the G1 counterpart this figure pays tribute to. 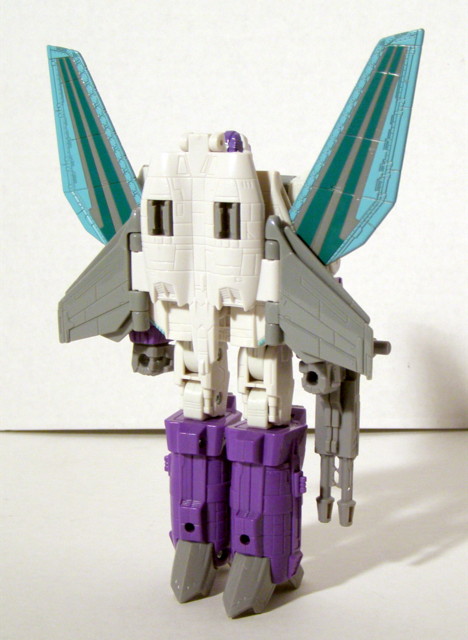 Since this is an exact mold of Jetfire (sans the head), posing is also exact. The main limitation is in the design of the feet. It can be tricky to get a leg pose while making both 'tips' of his feet can support the weight. 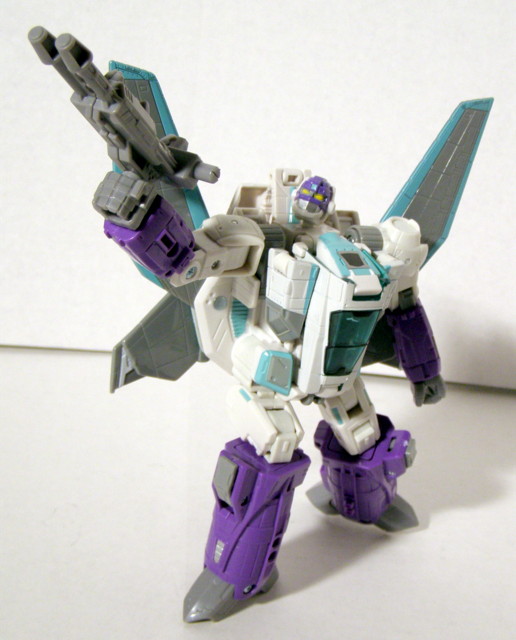 The armor can be added to his robot form as well. The cannons attached to the booster pack can fold down 90 degrees to become shoulder cannons. 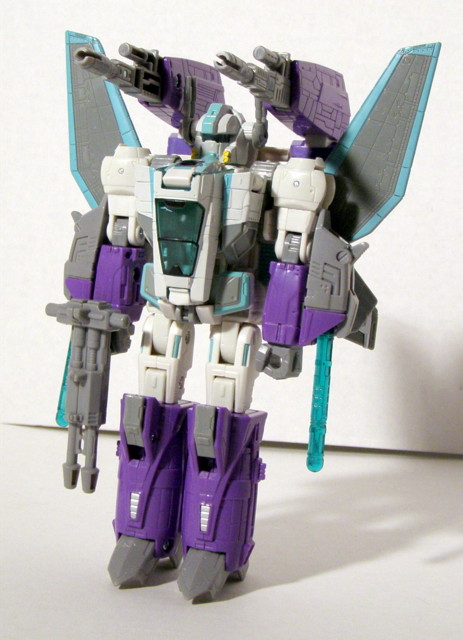 With the armor pack on, particularly with the helmet in place, this looks like a straight repaint of Jetfire. In a way, having the helmet on loses some of this figure's charm. However, there is no reason you can't leave the helmet off. 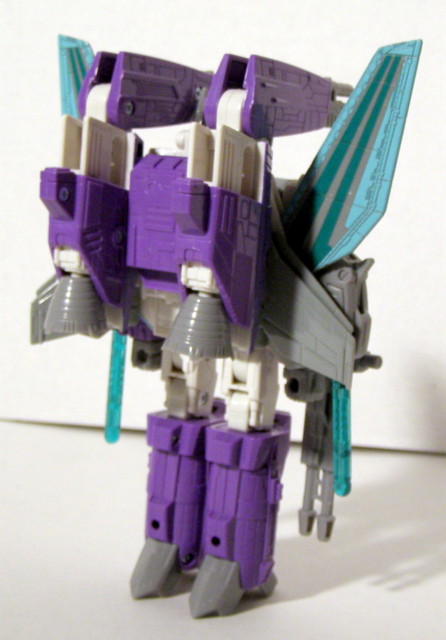 Posing is hampered just a little with the armor on due to the extra weight in the back. However, once you get the footing in place this is still a very articulate piece. It's unfortunate that we probably will never see his partner Darkwing. However, this is a great addition to the boxed set. 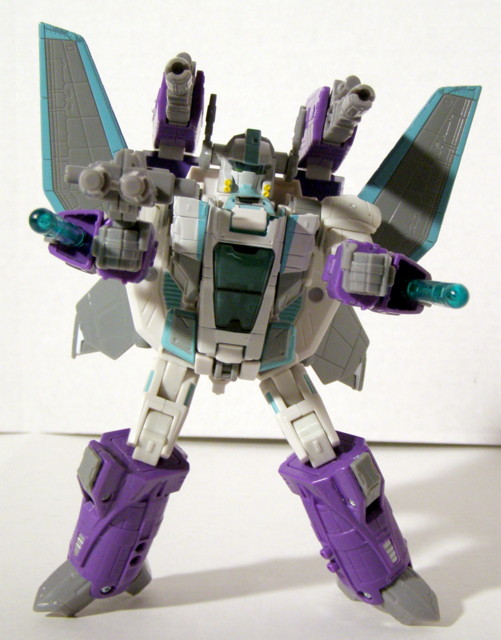