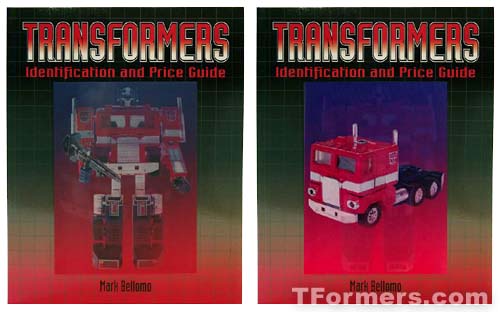 There have been a number of Generation 1 collectors guides over the years. Since I own most of them. I was a little skeptical to hear about another one coming out. What more could there be in this age of the internet and 8 zillion sites online about GeeWun? I am glad to say, I was wrong. The Transformers Identification and Price Guide by Mark Bellomo exceeds. It is a book chocked full of all the toys from 1984 on through to the end of the line in 1990 with series 7. More than just a volumized trip through yesterday. This is a big thick book with page after page of pristine Transformers toys photographed and neatly organized into the proper series and sequence. It's really quite breath taking - as you look at the book you will begin to hyperventilate over how many of these toys you need for your collection. You have been warned. :D 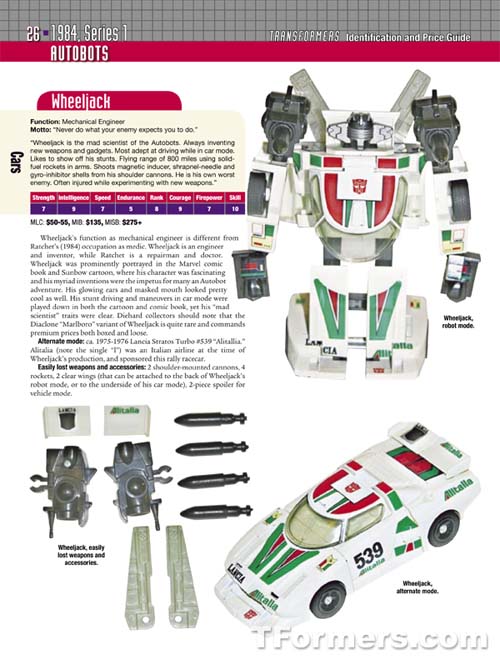 The book by Krause Publications, is a laid in out a large 8.5" x 11" soft cover format at a retail price of $24.95 US / $30.00 Canada. The cover of the book has a red G1 Autobots motif and really sweet lenticular image of Optimus Prime that switches between robot and truck mode. The book is more than a quick reference guide. Filled with over 1200 photos, it presents images and details of each figure grouped into a compendium of toys organized by year and series. Additionally, extra details offer the reader character tech specs, notes specific to each figure as well as estimated secondary-market valuations on the Transformers figure in and out of the box.

As mentioned, Transformers Identification and Price Guide covers the Generation One series 1 through series 7. Beginning with a bit of pre-history on the Transformers toy line. The book gives us some background on their Diaclone and Micro Change origins. Moving on to the profiles for each figure. There is page after page showing detailed information on the figure in its entirety. The profiles feature the character's function, motto, official description and tech specs. Additionally, there is info on estimated value, along with notes from the author on the toy itself, even offering suggestions on what weapons or accessories are most freqently lost.

Photographs abound in this guide. Every figure profile is shown in full robot mode, full alternate mode, and a detailed shot off all the weapons and accessories included with the item. I would have liked to see more box shots. It appears only the larger sets and bases include views of the toy packaging. All of the figures presented are in beautiful condition. Like they were bought in the store just yesterday. However, its somewhat of a shame that the photography is not quite as good as it could be in places. Regardless, that does not detract from what is a wonderfully detailed reference of every Generation 1 toy and accessory. 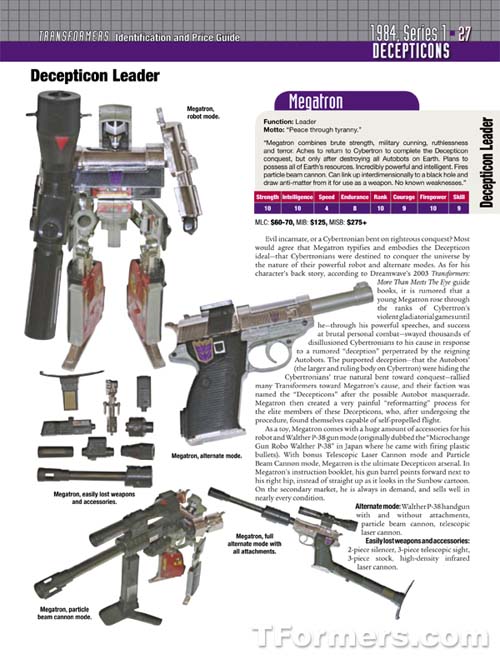 What I really like about the book is the author presents each toy in manner that is appealing to both the fan and collector in me. Mark Bellomo identifies and documents the nitty gritty details for every Transformer. He tells us stuff like which ones had die-cast and plastic variations in their production runs. He breaks down valuations by loose or in box, functional electronics and not (where applicable), and more like background data on the voice actors behind the characters and other bits of wisdom you'll find throughout the guide. I know I learned a bunch of stuff just writing this review. ;)

Overall, I think the Transformers Identification and Price Guide is a real improvement over previous G1 toy guides. I found it easy to read and informative from the moment I opened it. As a collector the slick lenticular cover and the well laid out compendium with 1200 pics had me thumbing this book over and over again. The addition of tech specs, obscure details and the well thought price valuations for all the Generation 1 toys really makes this the end-all guide for the line. For just $25 retail, this is a book no vintage Transformers collector should be without.

Want to learn more about making of the book? Read TFormers.com interview with Mark Bellomo author of The Transformers Identification and Price Guide here.