From the beginning, we knew that there would be more than one size class for some of the figures. However, I don't believe anyone knew from the offset there would be more than one leader class, although some people have expressed interest in giving Blackout or Bonecrusher such treatment. Hasbro has delivered us a different leader class figure, however, with Brawl. Already released as a deluxe, Brawl was an overall good mold sans the poorly thought out shoulders. Is that addressed with the leader figure? 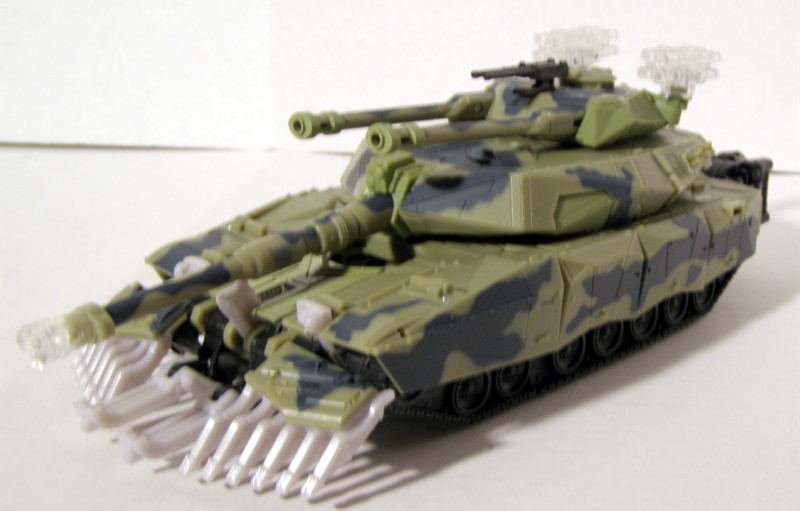 Brawl retains the modified M1 Abrahms tank mode. However, the detailing here is worlds apart from the Deluxe class figure. First off, the main turret no longer has a launchable missile. In it's place is a clear plastic 'plug' that houses an electric gimmick. If you press the barrel in, you hear a shell shot followed with a blinking red LED. A decent gimmick. The auxillary turret also exists, but now also sports a man gun in between the 2 barrels. The cannons in back are now clear. 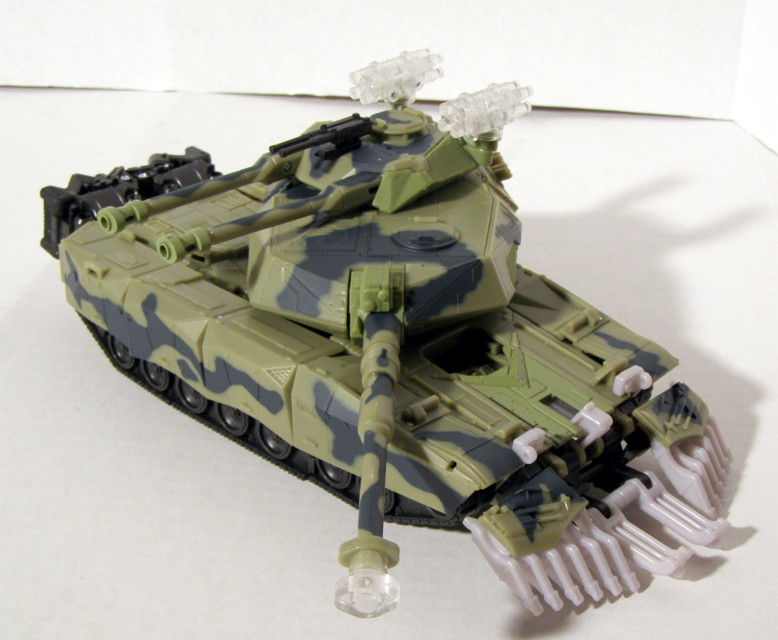 The main and auxillary turrets still turn independent of one another. An interesting twist to the electronic gimmick is, when you turn the auxillary turret to the right one sound is heard (something close to an automatic gatling gun), while turning it to the left will net a machine gun sound. Either way, the clear rear guns will blink green. Not sure why green is picked. To note is that this figure takes 2xAAA batteries which Hasbro was so nice as to pre-install. A nice improvement to this figure is that the main barrel now can tilt up. Otherwise, the leader class figure is identical albeit with much more detail. The Decepticon insignia is now located on the main barrel instead of on the main turret. 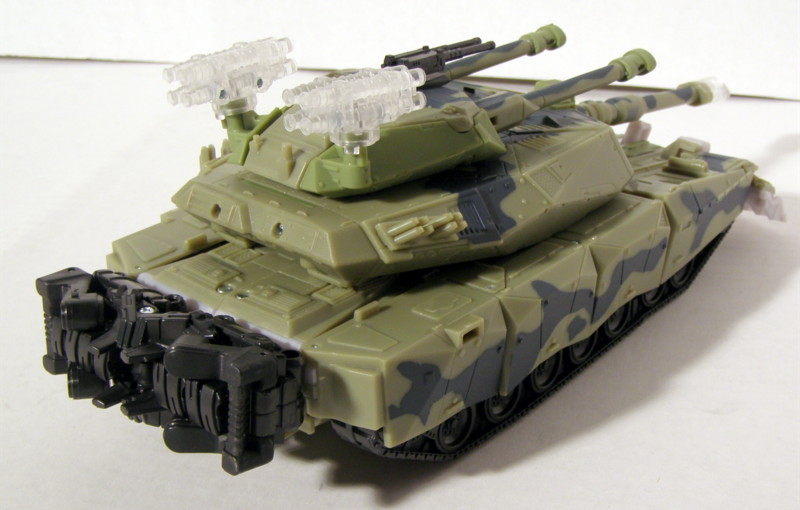 Transformation is somewhat involved. The first automorph gimmick is that the front fenders will snap back once unhooked from the minesweepers. The fenders and treads nicely fold up to form part of the legs. The frontward treads do not automorph like the Deluxe figure. However, like the other leader class figures, a latch on the chest can be pulled up to form the head and give you a light and sound show. whee. 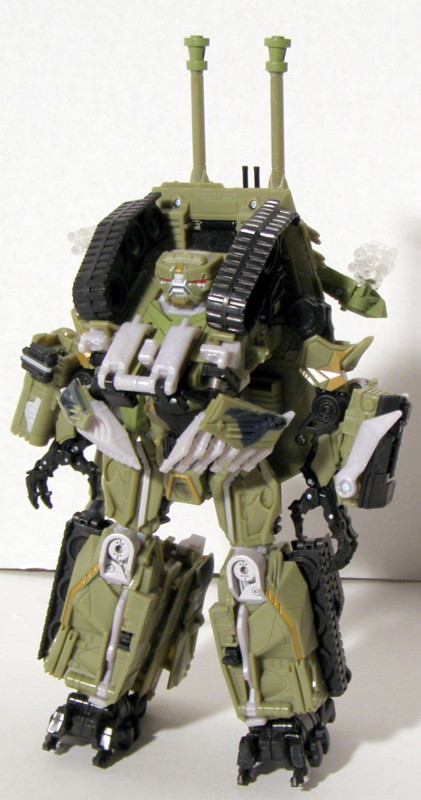 The robot mode is lightyears better than the Deluxe figure. The overall coloration of this figure does it more justice in my opinion. The stance is also much improved. However, they still gave this figure a small footprint, so it is still somewhat awkward to pose. The main barrel now rests next to his right leg, although it can be repositioned. 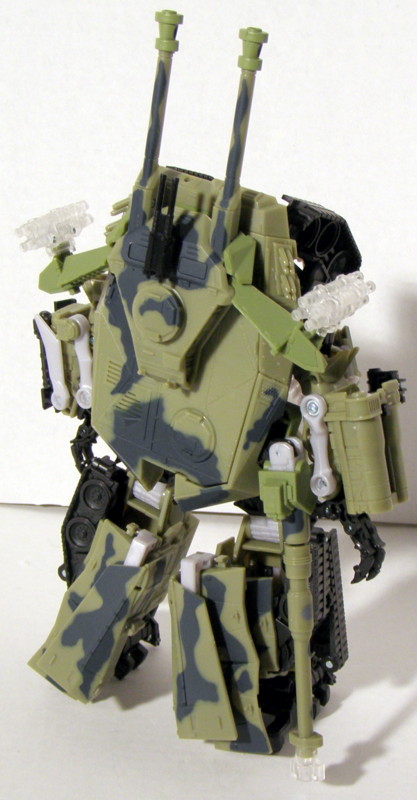 Points of articulation are as follows. Feet: Stationary. Knees: 1pt ratcheting, 22 degree movement (although you can move the treads out of the way for 4pt, 90 degree movement). Thighs: Pinned, unlimited rotation. Hips: 7pt, 105 degree, horizontal and 4pt, 90 degree, vertical movement. Waist: Stationary. Shoulders: 8pt, 180 degree, vertical and 3pt pseudo-ratcheting vertical movement with secondary free-range pin good for 180 degrees. Elbows: 3pt, 90 degree, vertical ratcheting with pinned, unlimited horizontal movement. Hands: 3 claws with independent movement. Head: Ball joint, 30 degree horizontal movement. The shoulders are perhaps the best I have ever seen on a figure. They made excellent inroads to, in a sense, apologize for the shoddy elbows on the smaller figure. Unfortunately, the kibble behind the knees and the limited head movement hurt this figure just a smidge. 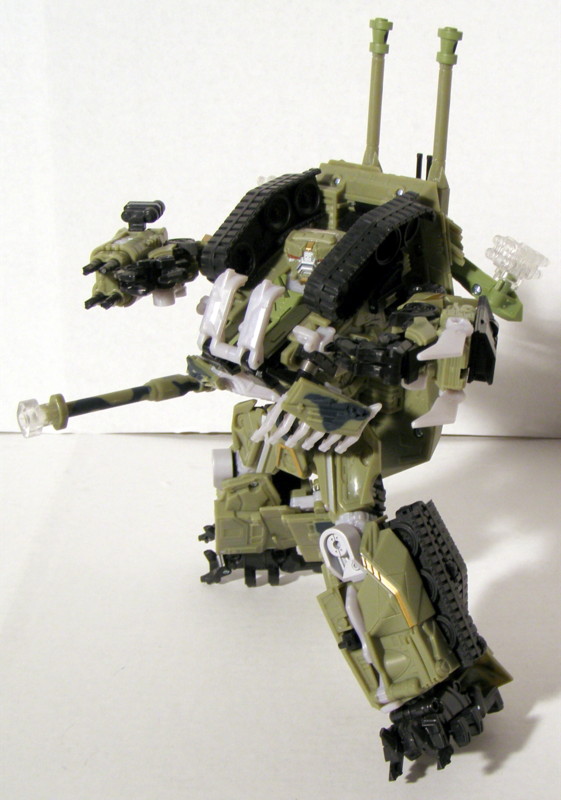 There are other gimmicks for Brawl in Robot mode. On his right arm is a box. Slide the lever forward and a 4-barrel cannon will pop out and also automorph a sight. On his left arm is another feature. Slide the black clip backwards and his claw will swing out, similar to his Deluxe mold. You can also find a smaller gun nestled in where his claws rested. The main turret can also be positioned to sit next to his right hip, a'la Armada Megatron. Just a warning, when transforming back to alt mode, it can be tricky getting the arms in position to close the treads and fenders back in place.

At first, I wasn't sure the $40 was going to net me a big improvement. I'm happy to say I am wrong. Besides some minor gripes, this figure is a vast improvement over the Deluxe mold and definitely worth anyone's consideration.