A holy grail is a term used for an object that is both prized and extremely difficult to acquire. Transformers lines in the last few years have definitely had their share. Whether it's Cybertron Wing Saber, Alternators Mirage or (more recently) the 08 Camaro Bumblebee of movie fame, there always seems to be that one elusive figure that is both highly desired and near impossible to get at a reasonable price. The G1 incarnation of Ultra Magnus for the 6" Titanium line is no exception. Not only is this the first UM figure in awhile to NOT be a straight repaint of a Prime, but is a figure that seems to fetch at least $40 on eBay... if not ALOT more. I was fortunate enough to score a Titanium 3pk on BBTS for a very reasonable $50. I have to deal with a duplicate Fallen and Megatron now, but was it worth it? 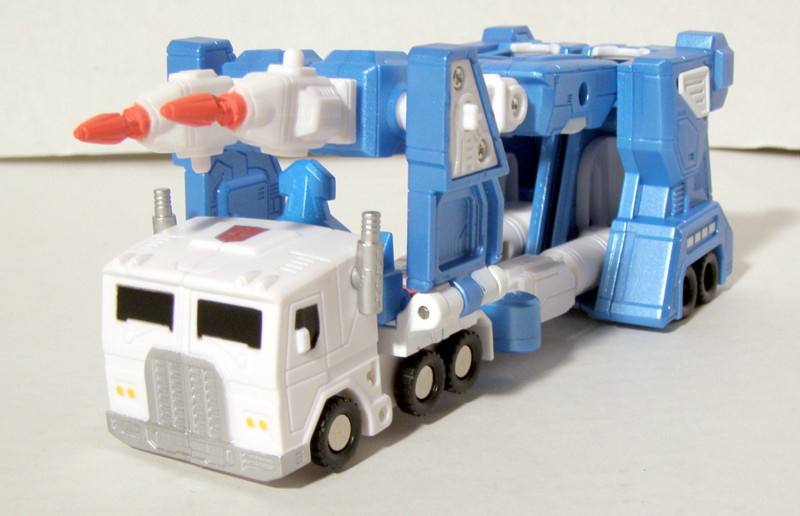 The Ultra Magnus of G1 fame was described as being an armored transport carrier in alt mode. This Titanium tribute does a fair job of resembling that vehicle. Magnus has the white cab with the blue trailer. You can also spot the Autobot insignia on the roof of the cab. However, the original G1 figure had a red lower deck on the trailer, while the Titanium version is simply white. Without the red, it looks somewhat bland. There's also a huge hole in the right side of the cab where a screw holds part of the figure in place. 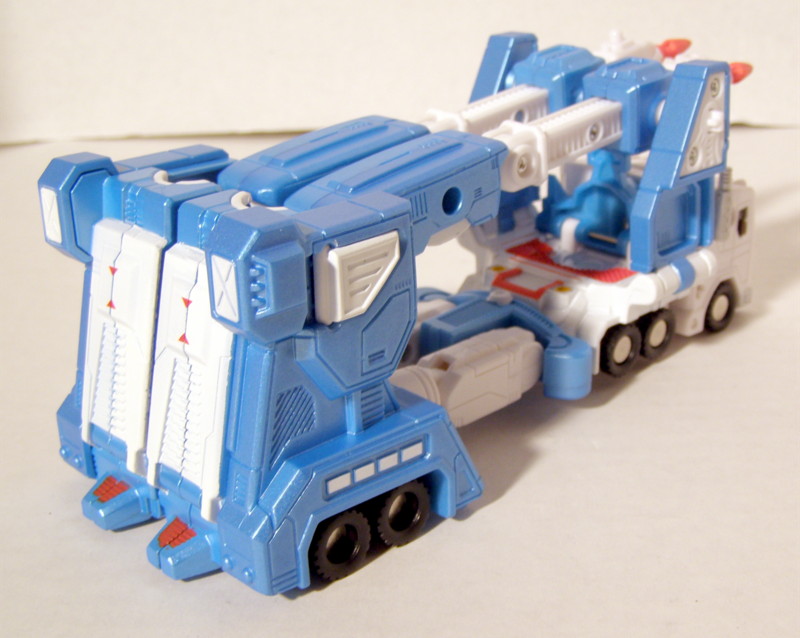 Perhaps the most shameful part is that the upper deck of the trailer doesn't even connect to the rear at all, but just hangs there. Titanium seems to have a bad habit of concentrating on one mode only while letting the other mode fall flat. For Ultra Magnus, the alt mode certainly wasn't the highlight. However, transformation is insanely simple. 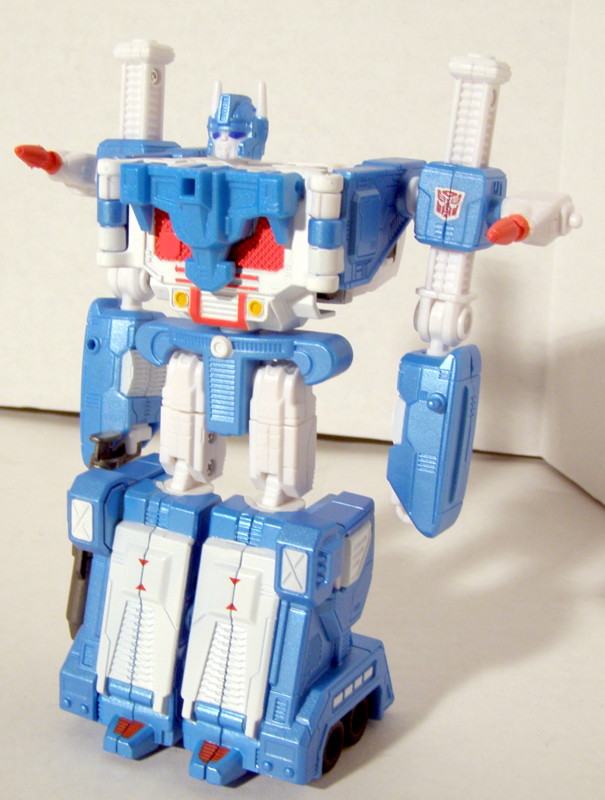 The robot mode is where this figure really shines. More red shows up, along with Autobot insignias on both shoulders. The head sculpt is detailed very nicely, but could have used more coloration. Magnus also sports an automatic rifle type weapon that fits (extremely loose) in his hand. 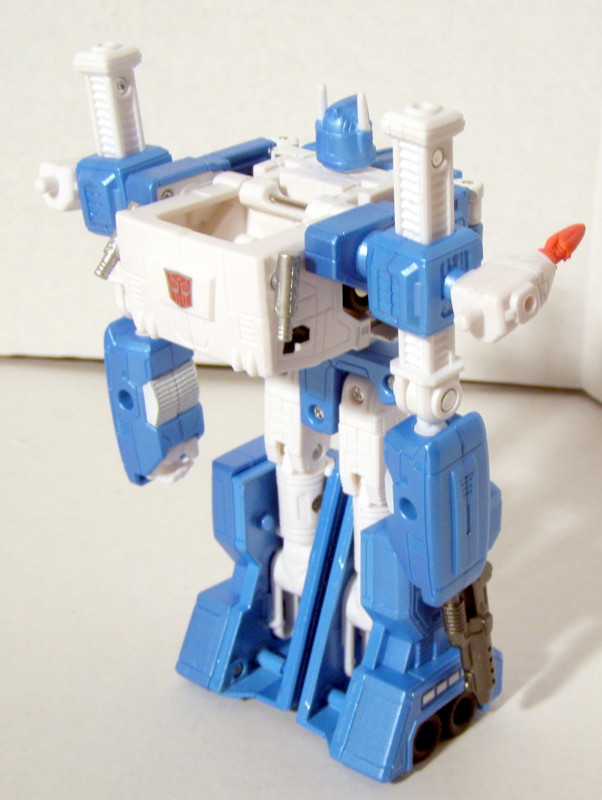 Points of articulation are as follows. Knees: 1pt ratcheting, 15 degrees (although you can cheat by dislodging the lower leg and achieve up to 150 degrees of rotation). Thighs: 8pt pseudo-ratcheting, 360 degree movement. Hips: 4pt 160 degree horizontal and 2pt 45 degree vertical ratcheting movement. Waist: 8pt pseudo-ratcheting, 360 degree movement. Shoulders: Single ball joint, 30 degree wingspan and unlimited vertical movement. Elbows: Pin joint, 90 degree movement. Head: Ball joint, 30 degree tilt and unlimited rotation. The knees have no range and the shoulders pop off way too easy if you try to force a pose. Also, it bothers me that the shoulders are disproportionally seated on his back. 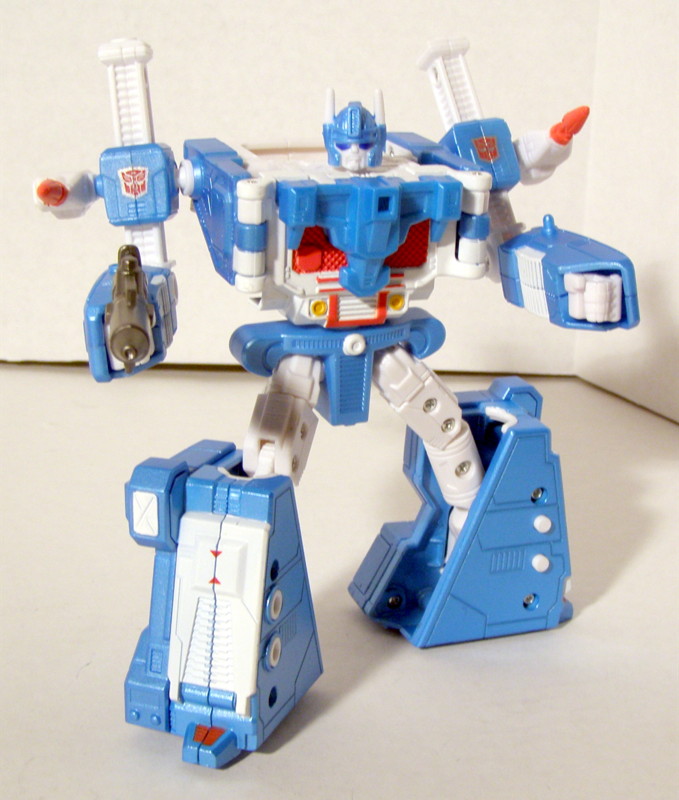 This is a figure that, like most of the Titanium line, has some faults. However, the robot mode alone makes it one of my favorite of the line. This isn't your daddy's (or in some cases, your) brick from 1986. While limited, he does have articulation and that's a plus. It's too bad the alt mode is more of an afterthought. He's a great swipe for the collection, I just won't get carried away and throw down a Ulysses Grant for one.