At this year's San Diego Comic-Con, there were two Transformers exclusives. One was the hotly anticipated repaint of Alternator Mirage done as Hot Ro... ahem.... Rodimus. This one sold out pretty quick. The other exclusive was a repaint of the 6" Titanium Rodimus Prime done as Menasor. This one didn't quite sell out. In fact, until recently, it was still available 2 months later on Hasbro Toy Shop. Since I couldn't make Comic-Con, I managed to grab this figure during their latest fall sale. Menasor is a failed experiment to permanently fuse the 5 Stunticons into one permanent being. 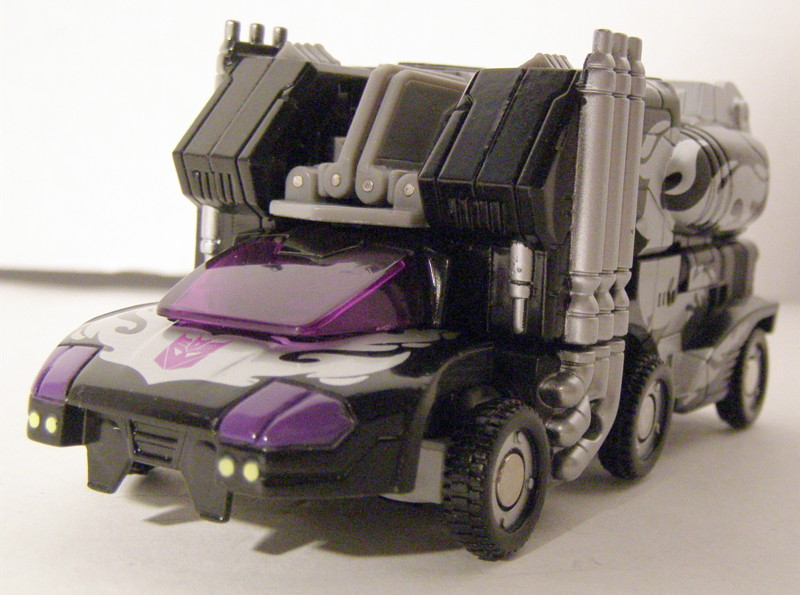 Menasor shares his alt mode with Rodimus Prime. He is done as a Cybertronian cargo truck. His colors are primarily black with a gray flame job on the cargo section. Purple also shows on the headlights and windshield. 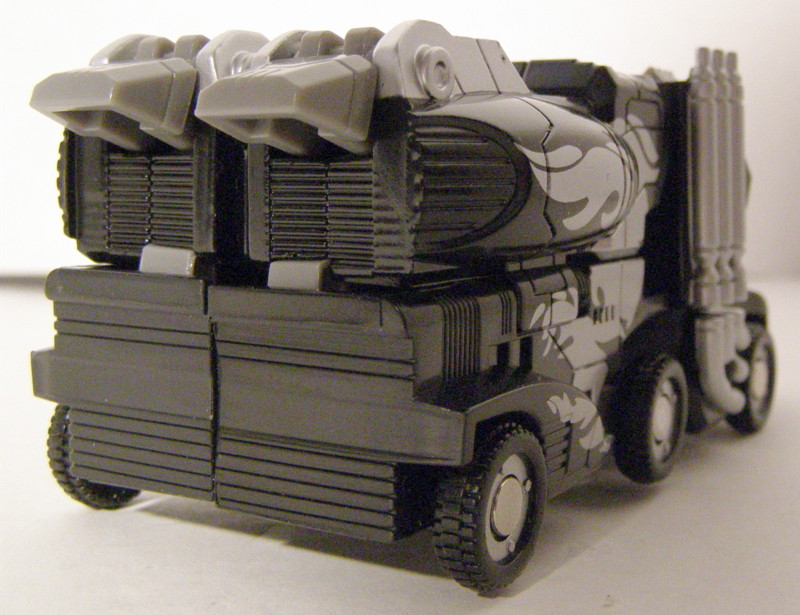 It's a perfectly fitting mold were this just Motormaster. However, the idea that a gestalt would transform into a singular alt mode is farfetched. 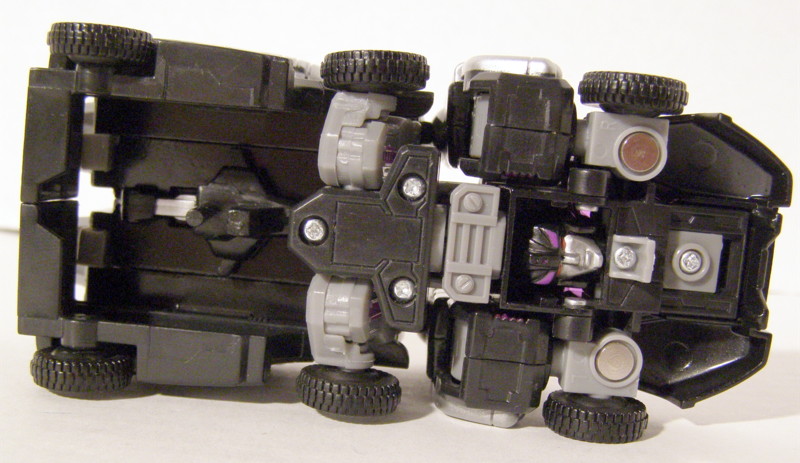 His weapon for robot mode is stored under the cargo section. You can also see the exposed head, but being this is well concealed in the belly section it's a moot point.

For a short run exclusive, it's amazing how far they went with the details. The base, instruction manual and packaging for Menasor is all redone to be name accurate. I've seen exclusives in the past (think Skyfall) where the instructions were for the original character of the mold and the packaging was little more than a baggie. Transformation is identical to Rodimus Prime, which is to say simple. 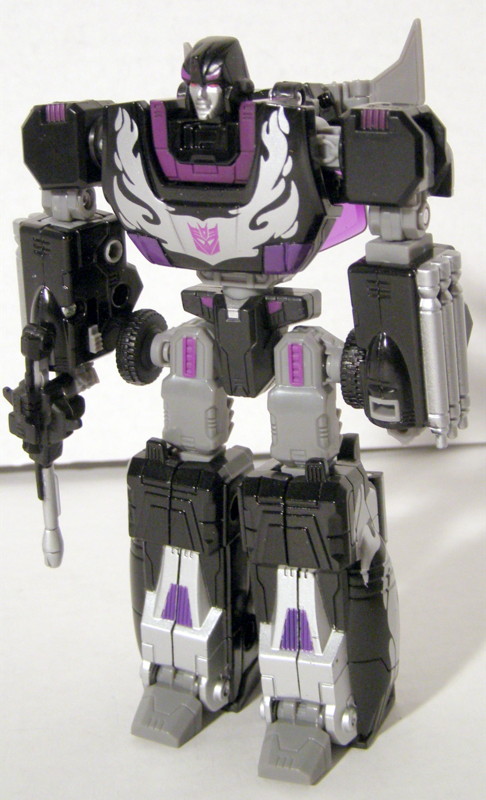 The black paint job given Menasor gives enough contrast to almost make you think this has no tie to Rodimus Prime at all. Purple shows up on the limbs in various spots. While the head sculpt looks a bit young to be Motormaster, it's otherwise colored correctly. 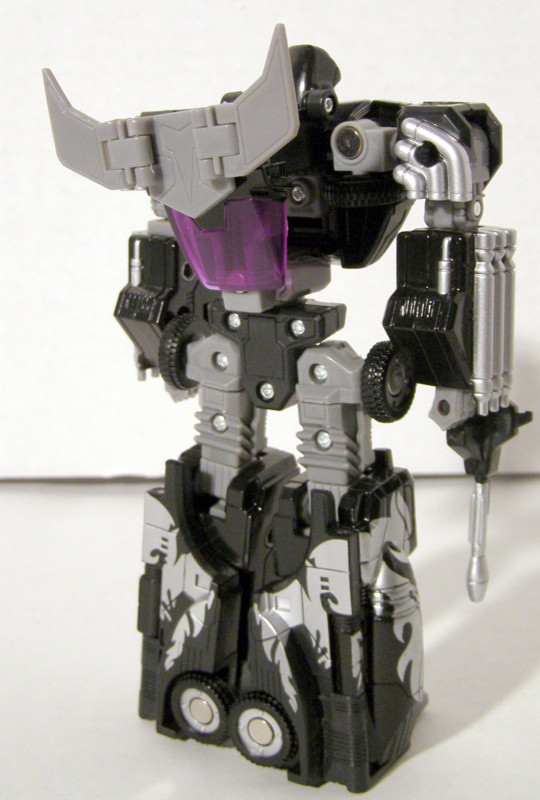 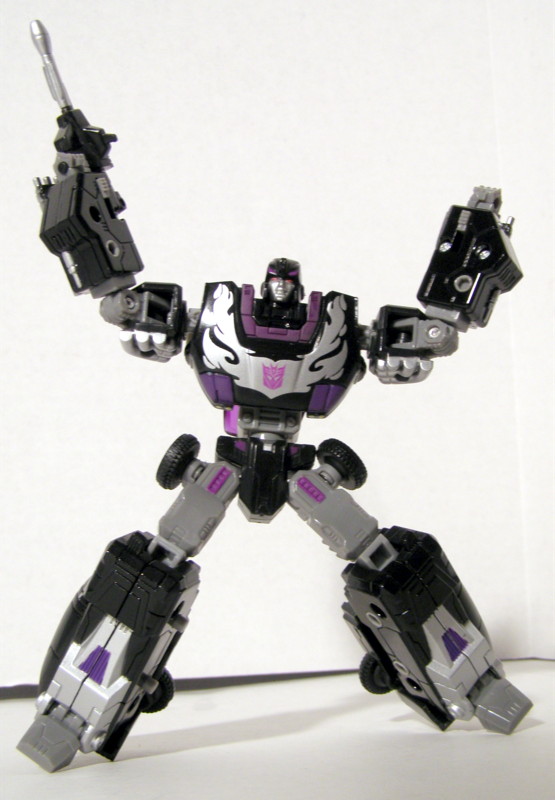 For being an exclusive, this figure was pretty well executed. If they had called this one Motormaster instead of Menasor, I think it would have garnered more sales. As it is, a gestalt does not normally form a single vehicle. That idea is about as crazy as Menasor is made out to be in this continuum.