The movie figures have gone over with much fanfare. However, there are some that wish Hasbro put just a little more effort into the paint applications. Well, that call has been answered. Best Buy is releasing 2 Voyager exclusives that boast a metallic paint job. One of these figures is a retake on the Megatron Voyager mold.

For Best Buy, the boxes get an exclusive look. Actually, it resembles packaging from the Classics line in a way, perhaps with some influence from DVD Prime. However, it does look very nice and would make a great display piece for all the MIB people out there. The card stock front and back is the same as the normal Voyager mold. 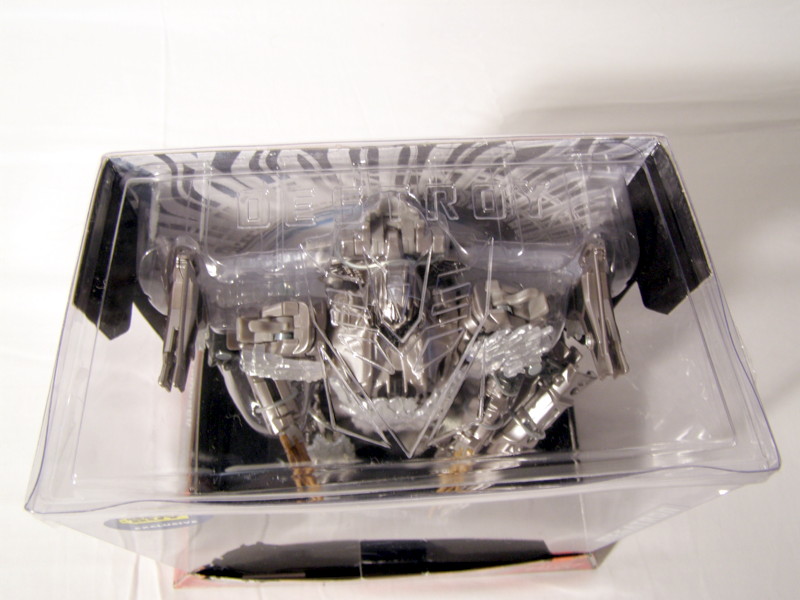 Another unique feature for the Best Buy version is the clear box top. Embossed on the top is the Decepticon insignia, along with the word "Destroy". It looks like Hasbro is banking on these being collector's issues. However, I have a review to do so, out it comes.

His alt mode is a less complex version of his Cybertronian jet mode. Compared to his Leader class mold, I tend to like this one better. It seems more believeable due to the leg kibble resting on the back instead of on the legs. However, I'm not particularly fond of the ice appliqué. The head is also a problem on this figure. However, the paint job underneath all that plastic ice looks worlds better than the Leader mold. 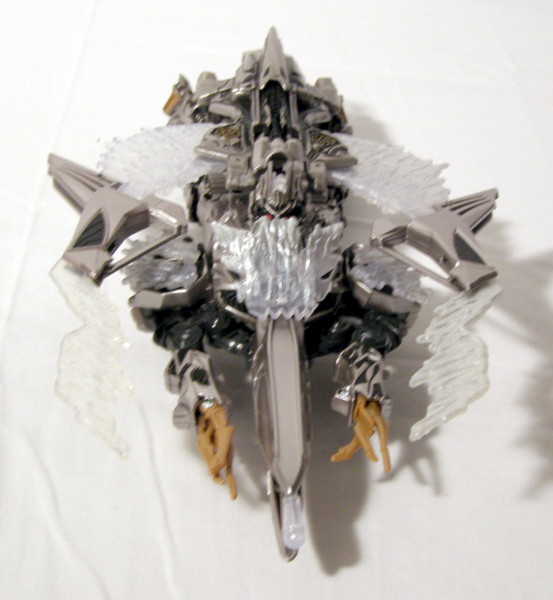 One feature the Voyager mode has is an Attack mode. By folding the wings forward, he has sort of a 'swooping' look to him. It looks somewhat imposing. Transformation is pretty simple.

His robot mode looks much better in a Voyager guise. Along with the metallic silver and black, there is various hints of a bronzed yellow. The details given to this figure really shine. It's unfortunate that they couldn't give this type of treatment to all of the line. There are 2 complaints about this mold. One, the nosecone folds up on one arm, yet there is a clip to hold it on each arm. The clip not used just sort of hangs there, making you think you might be missing something. The other complaint stems that with all the detail given to the body, the head looks somewhat plain. Unlike the Leader class, there is only one gimmick on the arm with the nosecone. It comes with a launchable missile. 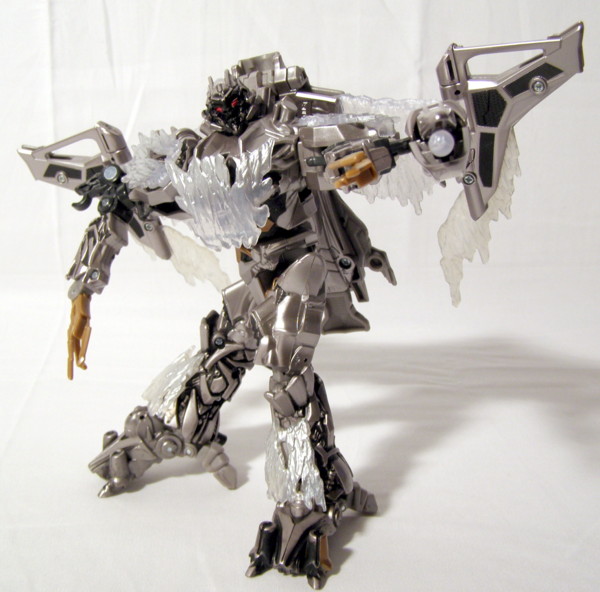 This figure puts the regular Voyager Megatron to shame and make the Leader mold look bad. It's amazing what a difference paint can make. Being the Best Buy exclusive is priced the same as the more common Voyager, I would definitely grab the Best Buy version first. With the much better paint job and more liveable alt mode for the Voyager mode, this one ranks alot better than the Leader in my mind.