Spoliers may be divulged in this review. For those who may have not seen this movie at all, or for those who are planning to purchase this DVD set, there may be scenes revealed. I assume no responsibility for any spoilers being revealed. You read this review at your own risk.

There are many... MANY options out there if you want a copy of Transformers. Enticements run from an animated comic DVD to an exclusive lithograph to a download card. However, I laid my bets on the one incentive that follows the line... a transforming DVD case. This was, of course, the Target exclusive. This exclusive contains the 2-DVD Special Edition (Directors Cut, w/e) of the standard definition variety. 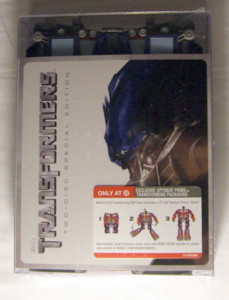 The case came in a clear clamshell package with front and back labels that one might find on a conventional DVD case. If you couldn't guess by looking at it, there was also a small label proclaiming that this was the Target exclusive transforming case. Fortunately, the clamshell is untaped and reuseable. 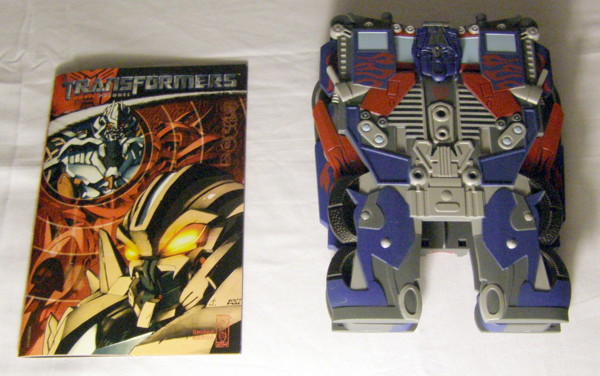 Along with the transforming case, there is also an IDW published 'exclusive' prequel comic that takes a completely different approach to the 4-part series released prior to the movie. The majority of the comic is centered on the Decepticons and includes Wreckage. It also explains why Wreckage didn't become part of the movie. The nice part about this comic is it has bits of "robo-vision" incorporated into it. For those who didn't get a chance to buy the Robo-Vision Optimus Prime, fear not! They included a Robo-Vision decoder inside the comic. 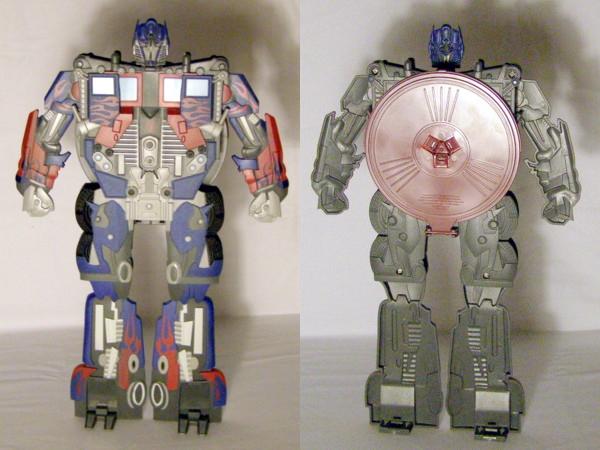 The case is simple to 'transform'. While the alt mode looks somewhat ungainly, by swinging the legs into place, pulling out the arms, sliding the feet into position and flipping up the head, you get a pretty neat looking Optimus Prime figure. The 2 DVDs fit neatly on his back via a lockable mini-case. 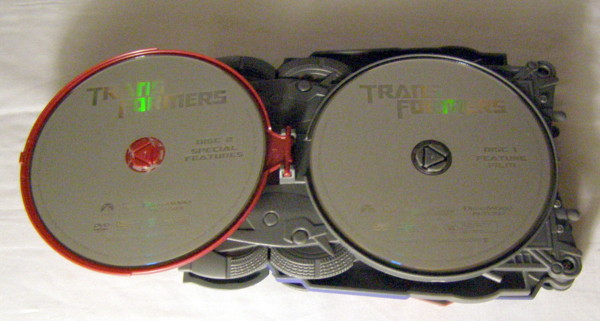 The DVDs themselves look rather plain. A simple grey matte DVD with the wording sketched out of the holographic disc. DVD 1 is dedicated solely to the movie and setup options. DVD2 features all the extras. 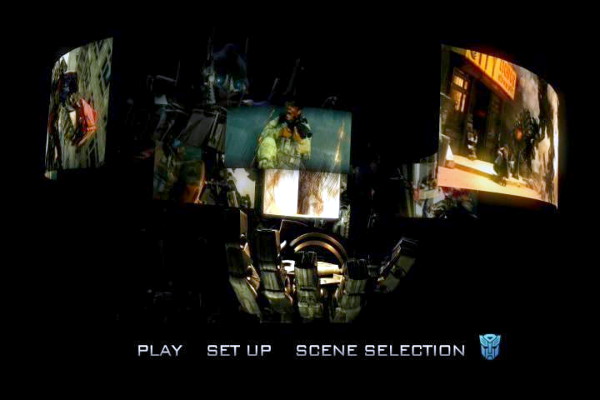 DVD 1 starts out with Optimus Prime holding the Allspark. Drawing nearer, the allspark emits movie scenes while scrolling around Prime. You have 3 options on the main menu. You can PLAY the movie, access the SET UP options or choose SCENE SELECTION to find a particular scene. PLAY takes you straight to the movie, as one might suspect. SET UP will give you options including English, French and Spanish subtitles. SCENE SELECTION lets you select from 23 points in the movie. 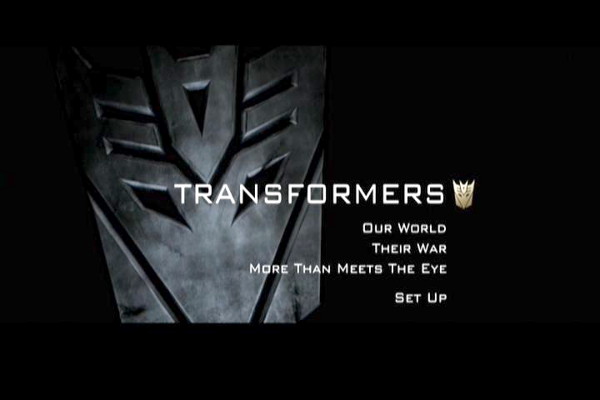 Disc 2 is where all the 'fun' is for the DVD. You start with an image of Megatron, which gets to an extreme closeup going thru his left eye. After that, you're left with just a spinning Decepticon emblem with 4 selections: OUR WORLD, THEIR WAR, MORE THAN MEETS THE EYE and SET UP. Set up is the same as before, but let's look at the other 3 options in more detail.

Story Sparks basically ties in the movie in general, discussing the ideas that were thought of and reactions from people in the cast and production crews.

Human Allies goes specifically into the casting process of the movie and details the initial casting thoughts on some of the main players such as Shia LeBeouf and Megan Fox. It also shows how the crew and actors worked together as the film progressed.

I Fought Giant Robots was one of the more interesting extras. This showed how the Military cooperated with Bay and Co. It outlined the training the actors went through with actual military personnel and how actual SEALs and Military extra were used in the battle sequences.

Battlegrounds showed the various filming locations used for the movie and some of the complexities involved with securing such a venue for a shoot. Sites included L.A., Holloman AFB NM, White Sands NM and Detriot.

Rise of the Robots

Rise of the robots outline Transformers' start from being a Japanese venture into becoming the 1980s icon. There are also some images from BotCon 2007 included in this extra. They try to explain some of the difficulties they faced making the movie while trying to keep G1 properties in check.

Autobots Roll Out details the choices made for the Autobots' vehicle modes, including some surprises you might not have thought of. This section also covers the stunts involved with the movie, both mechanical and human. Tidbits in this extra include the confirmation that Arcee was originally planned but cut due to 'an uneasy fit'

Decepticons Strike outlines the choices behind the Decepticons' vehicle modes, including the decision to make Barricade a police vehicle and the story behind Frenzy. This extra includes more scenes of Bay and the Military working together during the filming process.

Inside The Allspark highlights the special effects used in the film and shows some of the techniques used, including animatics versus storyboard approaches to movie making. As well as ILW, Digital Domain was used to render some scenes. They detail such scenes as 'Bonecrusher smashes through bus' and 'Blackout attacks base'.

More Than Meets The Eye

Script To Sand covers the entire Desert Attack scene at the desert town from start to finish. This includes the planning, setup and filming aspects.

Concepts has no narration. Rather, it plays a movie score while presenting a prepaced slide show illustrating the different concepts filtered through during the movie making process, including scene set designs and robot face art.

Finally, for those who can't get enough of the theatrical trailers, there are 3 such trailers included here.

I an normally not one that is captivated by special editions or directors cuts, but I have to say I found this one of the most interesting ones I've seen. Perhaps I'm bias to that since I am a TF fan, but nonetheless getting the 2nd DVD, whether or not the case transforms, is worth the extra few dollars you'll spend.