There has always been a hem and haw concerning how to make the perfect Starscream. Most fans know there have been several attempts through the years to do just that, but something always seemed out of place in either jet or robot mode. I personally believe the Energon attempt was the closest to day. When the MP03 came about, the price scared many off. If the price or the availability didn't deter anyone, the 'realistic' color scheme sure seemed to. Now, as a WalMart exclusive, MP03 Starscream is now commercially available in the US. 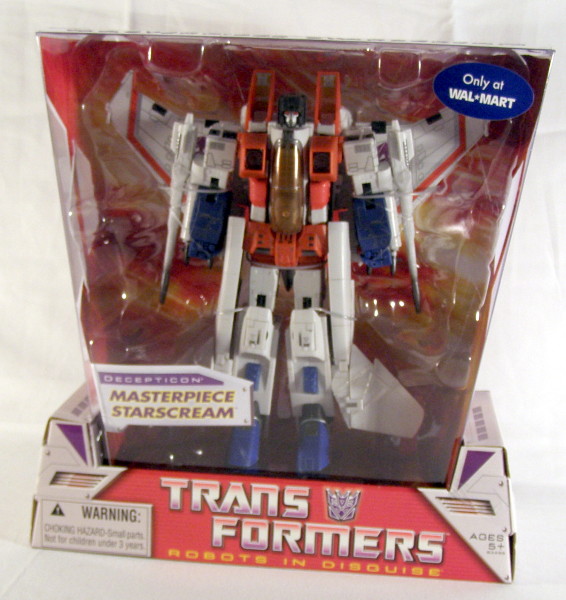 Starscream is proudly displayed in robot mode in the Classics-esque box. On the side panels, you can see the many different features that this figure has. Of course, I'll go into depth on those as we go further into this review. The back is a general summary of Starscream's essence and how this figure is inspired by his G1 days. Of course, looking at him, you already knew that. 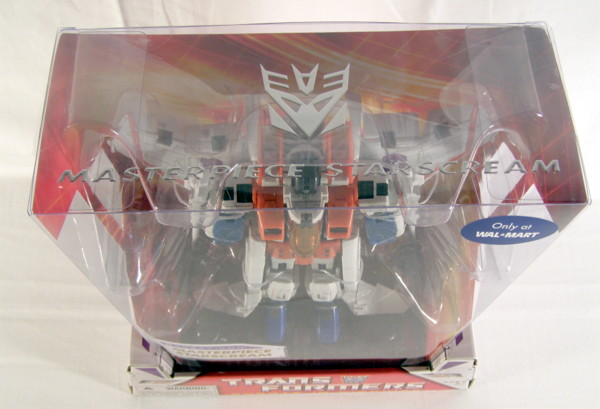 On top, you can see the Decepticon insignia along with "Masterpiece Starscream" embossed on the flap. They also have it in silver for easier reading. For those who want to keep this figure in minty box fresh goodness, you couldn't ask for a much better box to do it in. 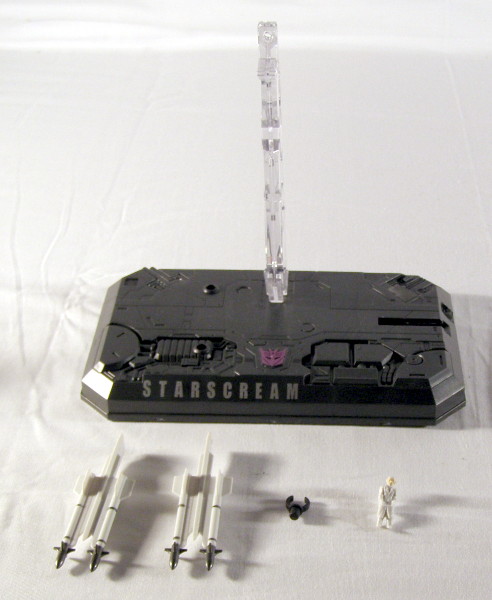 Besides Starscream, there are other items to be found. This would include (2) missile racks for his Alt mode, a clip that has a nice purpose, a display stand with "Starscream" and a Decepticon insignia etched in front, a display hook for posing Starscream, and a figurine of Dr Archeville. 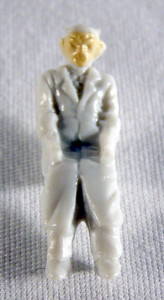 As with Prime and Megatron, Starscream has his one episode bonus with the good (or bad, actually) Doctor. He appeared in 4 consecutive episodes, the 3-part series "The Ultimate Doom" and "Countdown to Extinction". The figure is decently detailed but mostly all white. He is molded to sit in Starscream's cockpit. But enough about him, this is about Starscream.

Starscream has never looked better in Jet mode. The F15 Eagle that represents his G1 incarnation is very well represented here. Colors include mostly white with red on the air intakes and wings. The tailfins are blue with a red stripe. There is a Decepticon insignia on either wing. The nosecone is silver. The missiles mount under each wing. His null cannons just fit into a peg hole on the sides. The flaps on his wings are adjustable, a nice authentic touch.

One complaint has been about the "burn marks" near his jets. It's not as obtrusive as some of the photography has made it out to be. In fact, it's pretty realistic. I personally don't mind it much. One major benefit of this figure is that he has realistic landing gear! The nosecone has a fully retractable main wheel, while the 2 rear wheels fold into the belly. However, the panel housing the wheels is almost scraping the ground, so use caution. 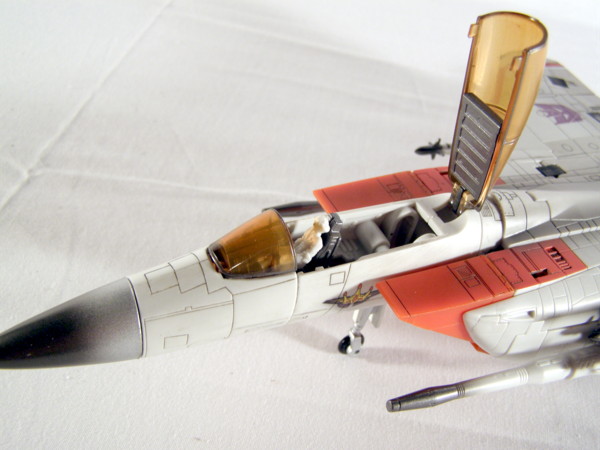 Starscream's cockpit opens to reveal a sparsely detailed seating area. Dr Archeville sits rather nicely in there. Note below the cockpit the crown insignia. Being most fighter jets have some sort of 'call' on them, this is fitting for Starscream. 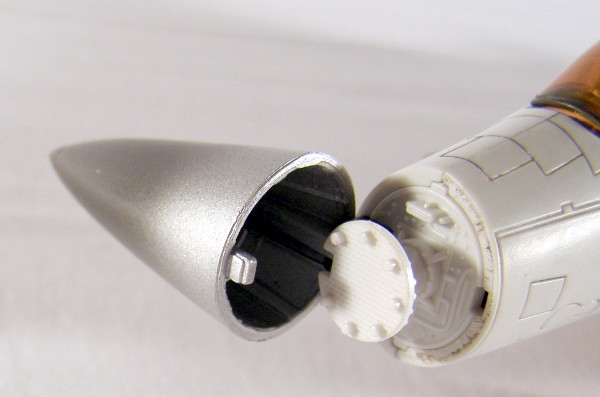 Lifting the nosecone forward and folding it to the right will reveal a radar . If someone could remind me what relevance this has to Starscream, I'd be most thankful. 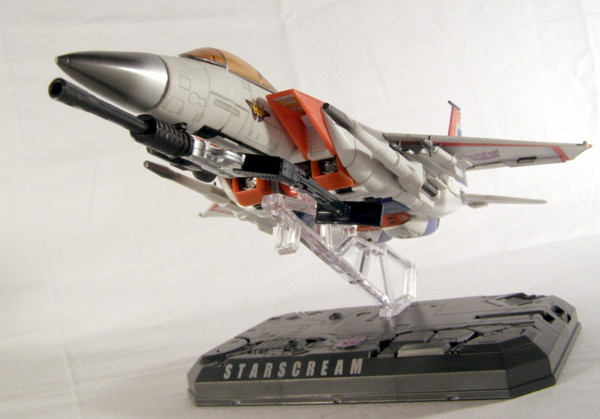 A display clip holds Starscream to the base. This clip can be positioned in one of three areas of the base. Remember that little black clip earlier? If you have MP01 Prime (or any of his derivatives), the Megatron comes in handy. The clip attaches to the base of his barrel. You can now use him as was pictured in the episode "War Of The Dinobots".

You will need the instructions for him the first time. It's somewhat faithful to the G1 figure, but much more complex. However, after changing him between modes a time or two, it's not as intimidating as it might seem. 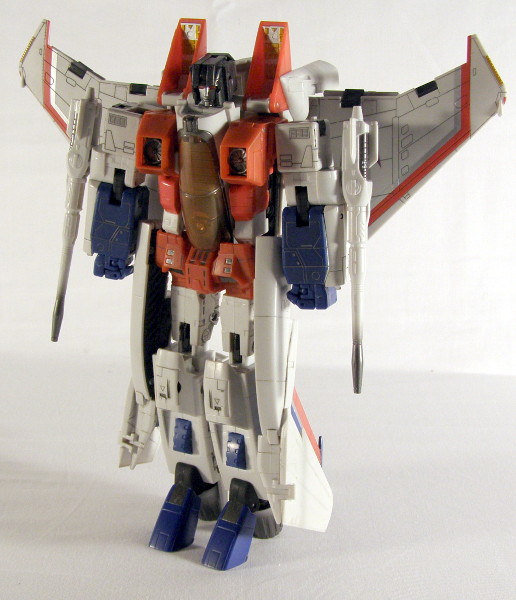 Starscream's robot mode is every bit as good as his alt mode. He is rather short (at just under 9") in comparison to Megatron or Optimus Prime. All of his attributes are faithful to the G1 animated series that it tries to portray. 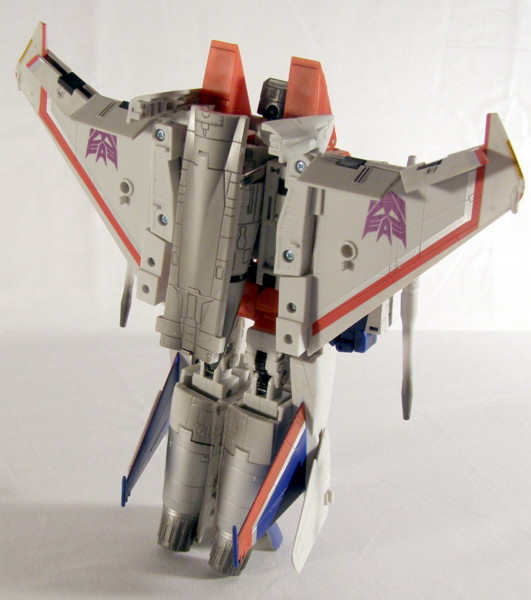 Another complaint heard about MP03 is that the tail section hangs off his hips. I would agree that this might be the one major weakness of this figure. It can hurt articulation, which I'll go into in a moment. Before I forget, the 2 rods that connect Starscream's backside are the only pieces of die cast you'll find on this figure. He is almost completely plastic, which can be good or bad. 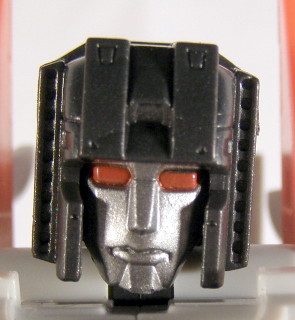 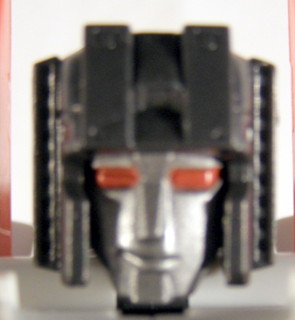 One of Starscream's gimmick is the ability to change his facial expression. It's real easy to do. Lift the head back, pull the face down, twist it 180, push it back in and lower the head back. The smirk on Face B (right side) suits him rather well. Another of his gimmicks is that he can lift the panels on his chest to expose 2 batteries of missiles. Unfortunately, they didn't decide to paint the warheads. A simple thing to do, but it makes it look less detailed. 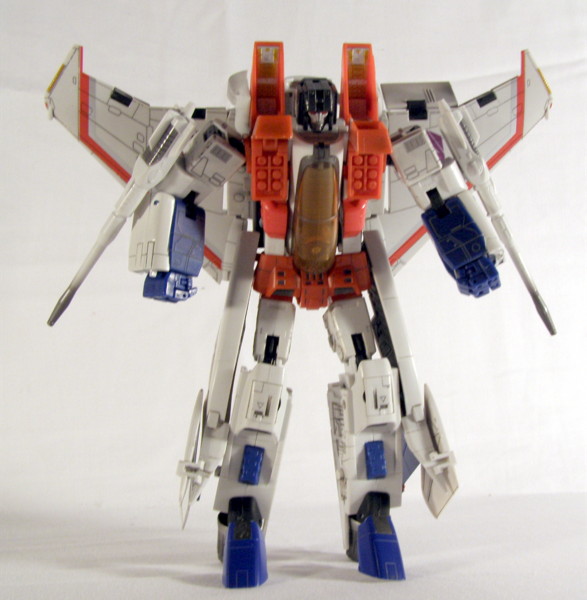 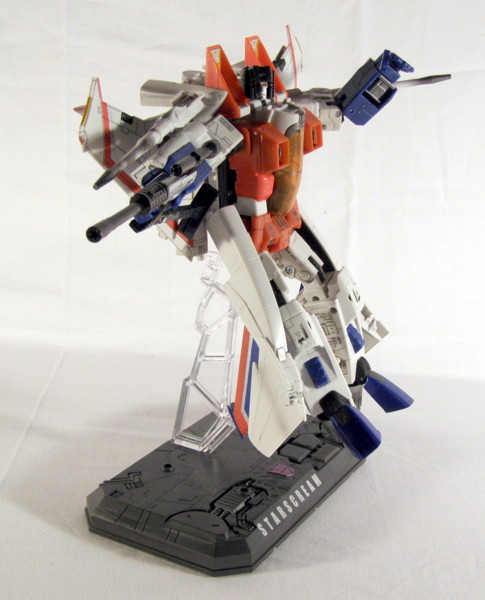 If you are fortunate enough to have a Walmart in your area, you can have this figure for $49.88. He seems to be shipped with the Ultimate Bumblebee variant with the free deluxes. Sure, this isn't an absolute perfect Starscream. Will we ever have one of those? Maybe not. This is pretty close, though, and close enough for me to be happy at the price given.