Animated Episodes 1 to 3 Transform and Roll Out! - Series

Okay, so if you were waiting for a Transformers cartoon series since Beast Wars and Beast Machines (yes, I loved Beast Machines and am not afraid to say it) that does not induce cringing, gut wrenching, puking, strangulation, or anything you can think of doing while watching the Armada, Energon, and/or Cybertron series, boy have I got a series for you!

While to this transfan Armada was bearable most of the time, Energon bearable some of the time, and Cybertron unbearable at all times (so bad, I only watched 10 minutes of an episode) I actually enjoyed – yes, enjoyed – the 90-minute Transformers: Animated special.

If you have not seen the series yet, I suggest you turn away right now, because I am going to spoil you heavily. While it’s not really that big of a deal since if I spoiled something it would not be devastating, some just do not enjoy the spoiling what-so-ever.

First off, let’s talk the actual story that took place during the 90 minutes. We are introduced to a Generation 1 homage in the beginning, which shows Generation 1 Megatron as well as some shots from the original cartoon. We see the current Optimus Prime watching the videos.

Ratchet tells him to stop watching that crap, which we learn that he dislikes those videos due to his playing a part during the Great War. We soon find out that Ratchet is an old-time, cranky warrior (Bumblebee says he has “one servo in the scrap heap”) who now just wants to leave the life of war behind him and repair space bridges for the rest of his life before joining the AllSpark.

We are introduced the Bulkhead, Bumblebee, and Prowl during this timeframe as well. Bulkhead is a blundering oaf; Bumblebee is exactly what his tech spec says – he’s the modern-day Cheetor; and Prowl is a quiet warrior who trusts only himself, and he has told Optimus Prime as much. 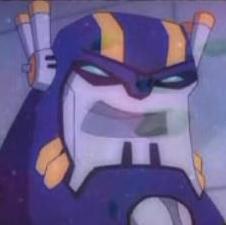 While repairing the space bridge on an “AllSpark-forsaken sector,” as Bulkhead puts it, the Space Bridge freaks out and turns out the AllSpark itself has found Optimus Prime and the gang. Ratchet fears the AllSpark and suggests throwing it away. However, before a decision can be come across, Teletraan-1 tells Prime that a ship’s energy reading nearby matches the one of the Decepticons. Obviously freaking out a bunch of repair bots just hearing the name Decepticon, the team loads up the AllSpark onto their ship and decide to flee.

Ratchet explains that there is some reason why the AllSpark chose to find Prime and company, and the fact that the Decepticons are looking for it is because the Autobots keeping it away from the Decepticons led them to win the Great War.

Considering their options, Optimus Prime asks to talk to the Supreme Commander on Cybertron for back-up. Sentinel Prime answers and tries to stop him from talking to Ultra Magnus. Once he shows him the AllSpark, Ultra Magnus is patched through.

Ultra Magnus does not think that the signature is a threat, but tells Prime he will be sending in forces, stay put, and not to be a hero. That it is not in his programming. 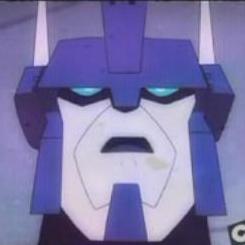 Here we meet the Decepticons Starscream, Lugnut, Blackarachnia, and Blitzwing (whom Blackarachnia calls three face and is an absolute loon). After a little bickering, Megatron shuts them all up with his presence.

After the report, Megatron decides to board the Autobot ship to find the AllSpark. After Starscream’s treachery overloads Megatron’s circuits, the Autobot ship takes into outer space and travels through a space bridge.

The Autobots think they’re free, but they’re not so fortunate. Megatron shows up, and this is the first time we see the enormous size of him compared to the Autobots. After a scuffle, Megatron lays his eyes on the AllSpark. While he is distracted, Prime opens up the docking bay and Megatron is sucked out into the atmosphere of little place we call Earth.

As Prime steers the doomed ship into Lake Erie, the Autobots get into their stasis pods. Megatron, meanwhile winds up landing in the backyard of a man we come to know as Isaac Sumdac.

Meanwhile, Starscream is still on the ship, secretly rejoicing that he has defeated Megatron. Attempting to solemnly announce his candidacy for Decepticon leader, the Decepticons have already abandoned ship, seeing that the ship is heading for a crash course with a burning, fiery ball.

Fifty years later, we see that Isaac Sumdac has helped pioneer Motor City, Detroit, Michigan, back onto the map as the number one producer of robots.

Here, we are also introduced to the central human of the show, Sari, who is the daughter of Isaac Sumdac. She chases her robotic dog around, who has stolen her key card.

Later down the exhibit, we find that a robotic bug, who is given a dose of microbots, reacts unexpectedly. It starts to suck anything organic or technological into its body and grows increasingly huge until it spills out of the plant and onto the docks.

As the firefighters and Detroit Police Department respond, we find a very, Dennis Franz (NYPD Blue)-like character enter the picture by the name of Detective Fanzone. He’s annoying, by the way. Very, very, annoying.

Anywho, after a scuffle and some smart bombs later, a piece of the creature falls into Lake Erie and disrupts the Autobots from their stasis slumber. They find that the creature is around and decide to help, but they first tell Teletraan-1 to scan nearby vehicles to blend in better. Ratchet, meanwhile, stays behind to analyze the foreign object that was responsible for waking them up.

Unfortunately, when the Autobots show up on the surface, the first responders have backed away, leaving them alone. Forced to fight, they transform and begin to attack the techno-organic monstrosity.

At this point, Sari and her dog finally come out of the plant, only for her to almost get eaten by the creature. The Autobots save her and Bumblebee takes her to a safe place nearby.

After Prowl tells Prime he does not trust anybody but himself, he gets eaten (I’m finding Prowl very annoying at this point in time). We find that the monstrosity had merged itself with Prowl’s com-link and knows what the Autobots plan on doing.

Ratchet, meanwhile, finds a way to decompose the guy and gives Prime the key. The only way to destroy it is from the inside. Dispatching Bumblebee to do so, he accomplishes the job, but the damage to Prowl is already done. With exposed circuits and all, Prowl is in critical damage.

The Autobots transform and roll out, with Bumblebee sneaking Sari onto the ship with his car. We find that Prowl is so damaged, he will most likely not survive. However, as Bumblebee in a dodgy way tries to hide Sari, she comes across the AllSpark. The AllSpark reacts to her presence and downloads some of its power onto her key card.

Prime finds her and Bumblebee struggles to explain, but they are called back to the operating room. The key card pulls Sari to the table, to which the key card transforms into the shape of Prowl’s key slot in his chest. It’s not explicity stated what this is, although it’s safe to assume it controls a robot’s Spark. Sari inserts the key and Prowl awakens, fully healed.

After a little rejoicing, the Autobots decide to head topside once again to return Sari to her parents. She explains to the hostile (I mentioned annoying, right?) Detective Fanzone and Sumdac that the Autobots saved her and are heroes.

The Autobots are recognized for their heroic duties in a city ceremony, to which Prime asks Ratchet if this what a hero feels like. Ratchet says there was really nothing to cheer about while the Great War was happening.

While the Autobots’ heroic status continues to run, we find later on that Starscream is still alive and notices the AllSpark’s signature on Earth and makes his way there.

During a ceremony to dedicate a newly built bullet train system, Starscream crashes the party. He winds up capturing Sumdac, Sari, Fanzone, and an offline Bumblebee (that Starscream with only one blast basically kills him) and gives Prime an ultimatum: give him the AllSpark, or he destroys the planet looking for it, starting with the humans and Bumblebee in the train car.

When Starscream is about to finish Prime off, the AllSpark opens up and we see a huge beam of light. When the light diminishes, we only see Prime left hanging off of a blimp in the sky. Prime falls to his death, but before he goes offline, he remarks about how it feels to be a hero.

The Autobots are sad that Prime has perished, but Sari does not give up, and attempts to revive him with her AllSpark key. The plan works, and Prime is back to life again.

The city of Detroit thanks the Autobots for helping them rebuild after the destructive battle they had with the Autobots.

While it is not explicitly stated when we are first introduced to Sumdac, it is revealed at this time that Sumdac got the technology for his company by studying Megatron. It was not a shocker. At all. We see Megatron’s head on a pedestal in Sumdac’s laboratory.

He expresses remorse for using the technology he got from Megatron to start his business and will never tell anybody due to his inability to justify his actions.

The cool things about the show so far: