So far, the new year only promises to bring us more figures inspired from the blockbuster movie from last summer. Although most of these figures are blatant repaints of previously released figures, there are a few original molds. In the case of this review, there is also one mold that has been slightly retooled. Evac comes to us as part of the "Allspark Power" segment of the movie line. He is called to Earth after the events of the movie to help with cleanup and recovery. 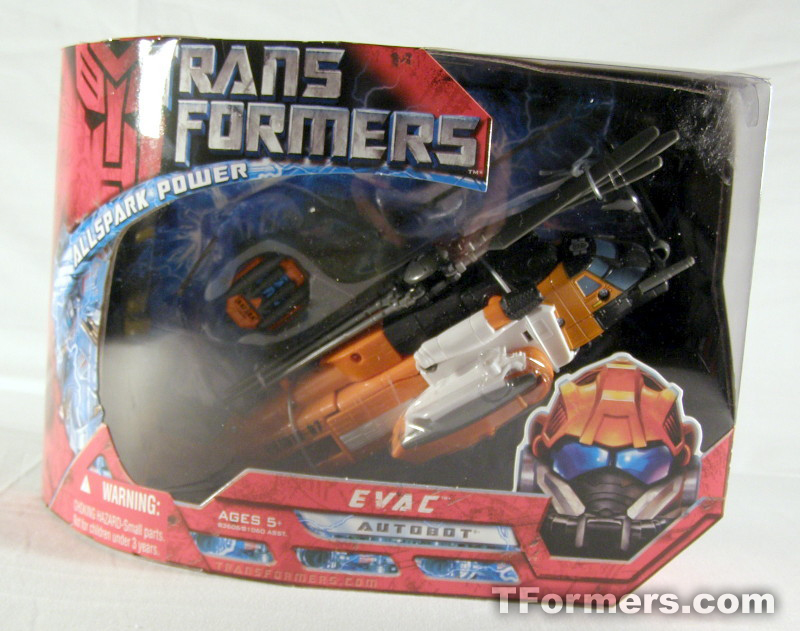 For the "Allspark Power" lineup, the box art changes just a little. There is now a blue swatch on the left side of the box proclaiming the new series name. The bottom of the box front can be same with the same light blue coloring. Other than that, the box art is consistent with previous releases.

Evac is a retooling of the Blackout mold. The color scheme this time around is mostly orange with some white, black and gray motifs. This is fairly consistent with rescue helicopters, although not quite the palate of a US Coast Guard rescue helicopter. All the details are the same as in Blackout, although the rotor blades are a bit more gray. There is also a flanked Autobot insignia above the cockpit. The only other notable difference is the addition of EV1015-07 on the tail. I have no idea of that number references the original anticipated release of the figure (Oct 15 2007?) or not.

All the features of Blackout work as well. The lever in the back still activates the main rotor. Evac also retains the 'cage' located on the rear of the belly. This time around, there isn't a metallic scorpion calling that cage home. Instead, there is another gimmick in it's place. 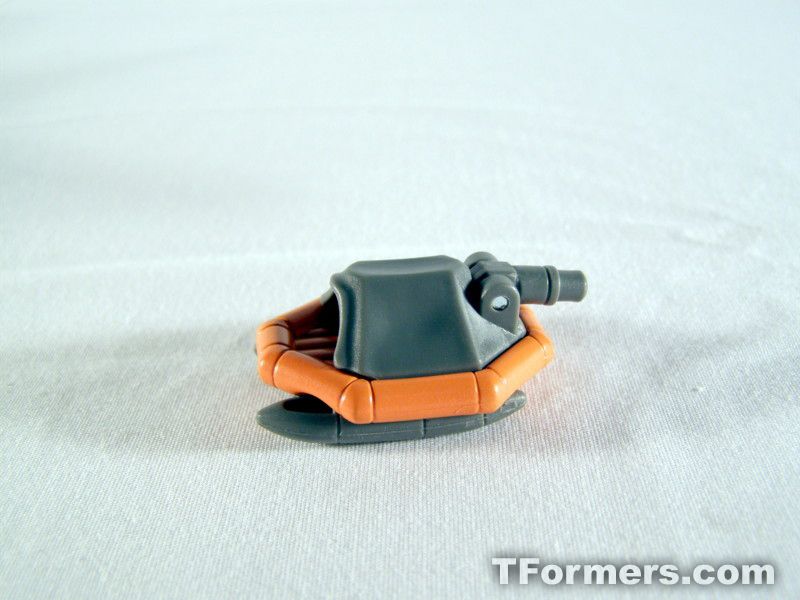 The new gimmick for this mold is supposedly a life raft. Indeed, it does seem to resemble an octagon shaped flotation device. Except this one has a roof on it. The 'roof' is detachable. Transformation is identical to Blackout's. Perhaps it's a fluke, but it seemed like Evac's Automorph feature (identical to Blackout's) works with more ease. However, I couldn't see any changes or improvements to the original design. 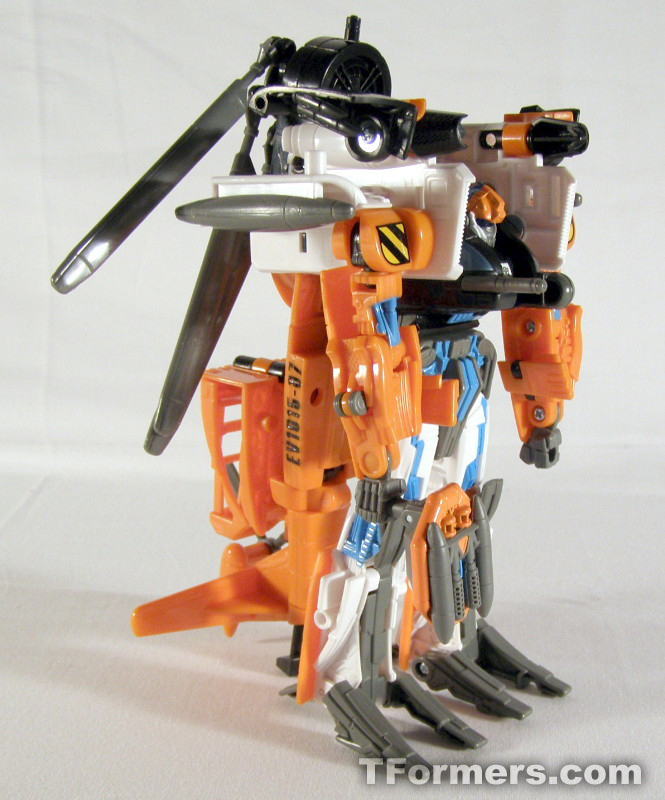 It is in robot mode where you can see the subtle yet very visible differences in this mold. The orange and white motif remain, with a little more white showing up. Also, the Allspark blue is visible in the limbs and chest. The life raft converts into a hand gun, which is a rarity for the movie figures to have hand guns. The two big differences with Evac with the hands and the head. His hands are more 'human' like than just 3 digits like Blackout have. They are obviously pegged so that he can hold his weapon. 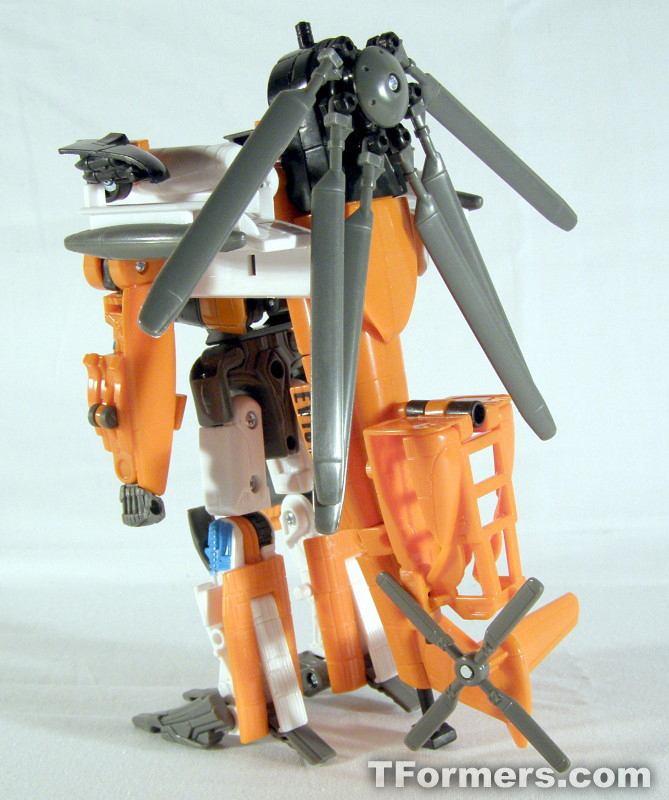 The other difference is his head. It is a more familiar TF sculpt than the alien like appearance of Blackout. The eyes have blue piping ability. Articulation for Evac is identical to Blackout's, which is to say, very good. Evac can also use his rotors as a weapon in the same fashion that Blackout did. 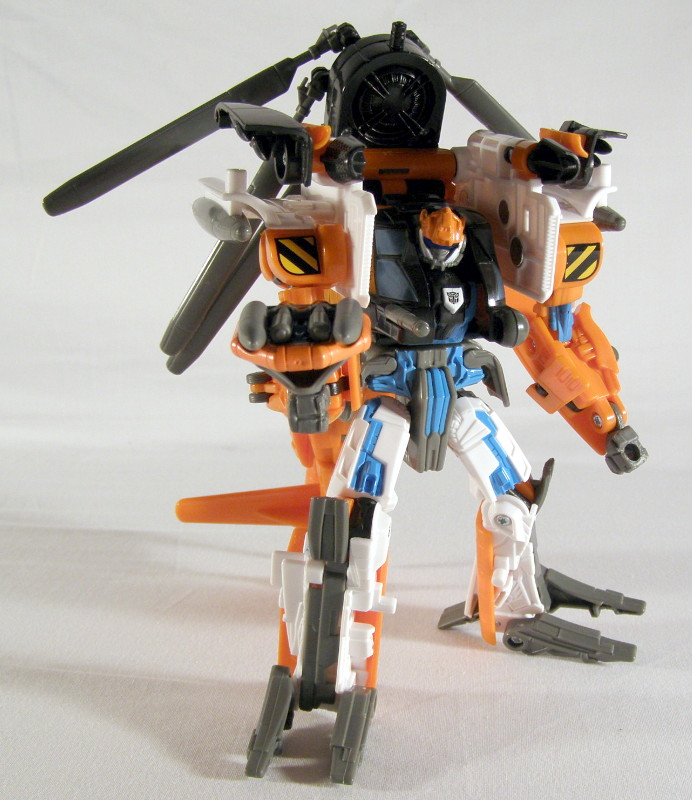 Evac retails at the same price as Blackout. While some people might not prefer the color scheme given to this figure, it is an excellent mold. In my opinion, it's worth owning again if you were a fan of the original. It may even automorph better! 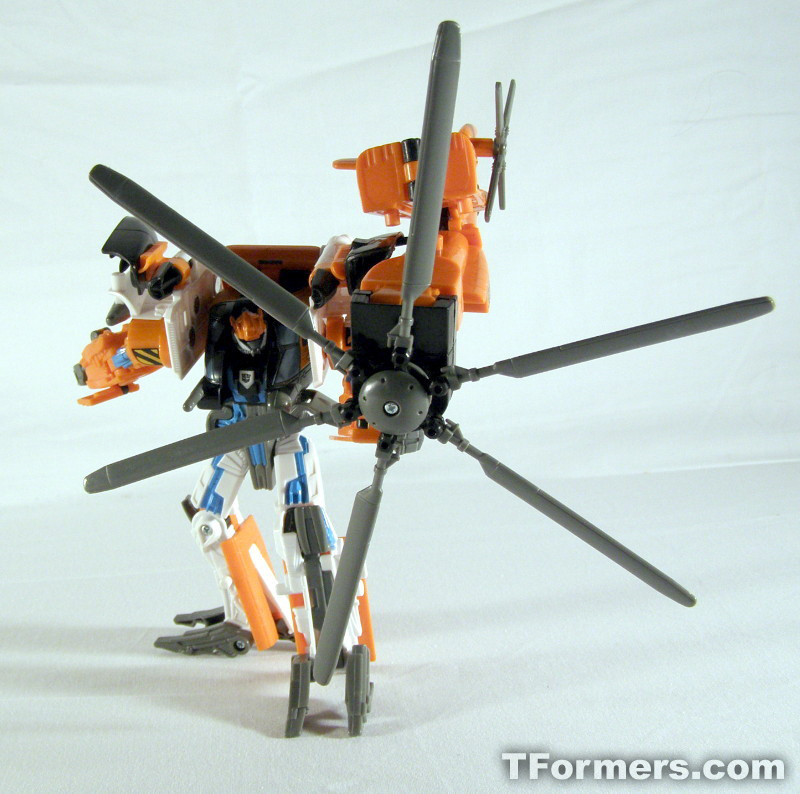