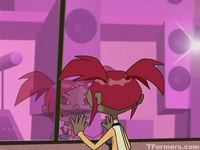 It's Sari's birthday, and she has taken Bulkhead window shopping to find that perfect gift. However, the hunt will have to wait as another random human villain appears to wreak some havoc. Seems Professor Princess and her My Little Pony inspired sidekick have a problem with action figures and other "awful, violent toys". So she proceeds violently (in typical hypocritical fashion) to violently take out the store. Bulkhead (with help of Sari and her Allspark key) subdues her and destroys her sidekick, reducing the Professor to throwing a fit in the streets.

Megatron happens to be watching, and comes to the conclusion that the Allspark key is his best ticket to regaining a body. Flashing plans on Sumdac's screen, Megatron overlooks plans to build what he hopes will become his new body. However, he pulls back the screen as Sumdac enters the lab. While Sumdac openly ponders what to give Sari for her birthday, Megatron offers his creation to the doctor, noting her "interest in the odd sound patterns". 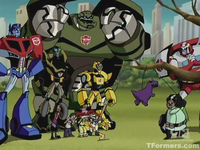 Cut to Sari's birthday party. Sumdac rounds up some kids (turns out they're the employee's kids) to help Sari celebrate. Wild fun ensues when the Autobots arrive to help out with the party. Bulkhead, in his normal well meaning but clumsy way, manages to tear up the party scene. While the Autobots get into vehicle mode and give the rest of the kids a ride, Sari and Bulkhead are left alone with Sumdac. They refer to themselves as "getting ditched". Interesting to note that Prime is a little irritated by having to use his "transform and roll out" tagline for the kids, while Ratchet is just irritated to be giving rides.

Sumdac tries to cheer his daughter up by suggesting she open her presents. While Bulkhead rummages in his chest to get his present for Sari (a xylophone, which is just pathetically cute), Sari opens a box to find a HUGE cassette deck (if you can call it that). The deck begins to transform in G1 Soundwave fashion, but stops at the legs and backs off, revealing a human sized robot. Sari curiously approaches the robot and hits the Play button. Upon powering on, the robot announces "I AM SOUNDWAVE" and begins a light and sound show. Sari is estatic saying it's "the best present ever". She then turns to Bulkhead, who realizes he's been majorly outgifted, and asks what he wanted. Bulkhead says it was nothing, puts the xylophone back in his chest and dejectedly turns away. 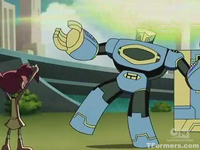 "The best present ever" quickly becomes rather droll as Sari shows boredom in her new gift. She decides to "juice up" her new present via the Allspark key. Bulkhead arrives around the same time and Sari lets him know that she has made some improvements on her new toy. Bulkhead watches as Soundwave emits a new array of speakers from his shoulders. He seems troubled by the new upgrade, and shares his concern with Sari about using her key on Soundwave. She replies that it's only a toy, but a voice cut to Megatron shows him pleased.

He's planned on Sari using her key on Soundwave. With the Allspark key's use, Soundwave will evolve and eventually become the new body that Megatron needs. Cut back to Sari's room, where she again uses the key and creates another pair of speakers emanating from Soundwave's back. In a rare show of gracefulness, Bulkhead taps Soundwave's back, ejecting the Allspark key and causing the new upgrades to revert. He again expresses his concern about using the key on Soundwave and reminds Sari of how her previous key usages has caused problems (like the Dinobots for example). Sari ends up agreeing with Bulkhead and they both retreat out of her room. Megatron is not terribly happy with this outcome and plots a way to separate Bulkhead from Sari. 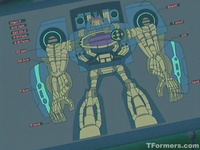 It's the next morning, and Megatron commands Soundwave to seize Sari. However, she wakes up amongst the light show that Soundwave emits and founds him on the bed. Wondering how she got there, she tries to turn him on but gets nothing. Then she inserts the Allspark key. After the 2 new improvements emerge from the previous key usage, Soundwave emits a sound wave that seems to affect all the local automatons in the area, drawing them to him. This profounds both Sari and Megatron, both commenting that this action was unexpected. Sari decides to call Bulkhead to tell him about it, but Megatron commands Soundwave to intercept the phone call. He taps into the phone line and monitors the call.

Cut to Autobot headquarters. Bulkhead is feeling rather rejected, trying to play the gift he bought for Sari. His frustration tempts him to break it, but Prime intercepts and tries to calm Bulkhead down. Bulkhead knows that this "toy" shouldn't replace him, but his "sparkplugs" feel otherwise. He receives the call from Sari and she asks him to meet her in the park. However, Megatron commands Soundwave to activate voice modulation. Soundwave modulates Bulkhead's voice and proceeds to diss Sari. She hangs up on Bulkhead, who is left wondering what happened. Sari then leaves her room, taking Soundwave with her.

At the park, Sari is seen with Soundwave giving a concert. Other automatons are shown performing with her. The concert is interrupted when Bulkhead literally crashes the party and demands Sari get away from her present. An argument ensues, and Megatron tries to capitalize on this opportunity by deploying a shoulder mounted cannon from Soundwave and aiming it at Sari. Bulkhead sees whats going on and grabs him quickly, aiming to snuff him out. At that time, the rest of the Autobots arrive and convince Bulkhead to stop what he's doing. Bulkhead is convinced Soundwave was going to shoot Sari, but the shoulder cannon quickly morphs into a trumpet and thereby disproves Bulkhead. As the other Autobots question Bulkhead's mental state, Soundwave loses it's arm and tumbles to the ground.

Sari is now angry that Bulkhead broke her present and accuses him of trying to break Soundwave on purpose. She uses her key again and revamps Soundwave, which now has an upgraded face. Prime commands the other autobots to return to base. He tells Bulkhead not to worry about her giving up on Bulkhead as a friend. Bulkhead replies by telling Prime she's been different since acquiring the robot. Prime cuts back with "She's not the only one that's been acting different" as he transforms and drives away. 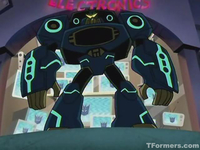 Sari is making her way back home and is awaiting the train. Megatron sees the time as ripe for recalling his creation. However, Soundwave does not respond to either Megatron's or Sari's commands. Instead, it would seem that Soundwave has now achieved sentience. He tells Sari he will no longer take commands from her or any human as the train door closes and she pulls away. As Soundwave walks the streets, he notes how illogical it is that robots serve humans instead of the reverse. This seems to annoy Megatron, who now is also aware of Soundwave's sentience. Megatron concludes that the last use of the Allspark key is the culprit. He manages to get Soundwave's attention via TVs in a store display.

Soundwave begins transmitting more of his robot control waves and attracts a wave of smaller robots. These robots begin merging with Soundwave and assimilate with him to form his final form. Soundwave announces his allegiance to the Decepticons as their logo forms on his chest and then says "the revolution has begun". He transforms into his vehicle mode and initiates "Operation: Recruitment". Sending out more of his control waves, he sparks a riot between automatons and humans throughout the city. This catches the attention of the Autobots, who roll out to the city in order to find the cause and stop it. 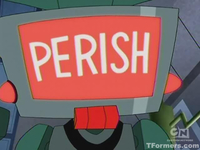 In the meantime, Sari is captured by her teacherbot, who is also under Soundwave's control, and brings her to Soundwave. Sari and Soundwave debate, as Sari tells Soundwave that the other automatons are only machines, unaware that Soundwave was a creation of Megatron. However, Soundwave seems unaware of this fact too, assuming all other automatons will evolve as he did. He commands the automatons to attack the Autobots in "Operation: Autobot Destruction".

The Autobots appear on the scene and are almost immediately attacked by the automatons. Prime announces teams, which Bulkhead 'predictably' being left to his own. Soundwave taps into the Autobot's comm links and uses his modulation feature to cause confusion. Bulkhead goes underground to find Sari and Soundwave. Soundwave proceeds to blast Bulkhead with his waves and knocks him down. Soundwave shows his intentions not to harm a fellow machine and tries to talk sense into Bulkhead that humans must be enslaved. Bulkhead plays along just long enough to get close to Soundwave. Using his mace ball, Bulkhead smashes through Soundwave's body, causing his assimilation with the other automatons to fail and explode. This also voids the control of the other automatons, who revert back to their original programming. 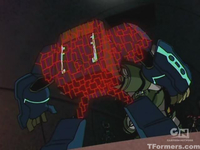 As Sari and Bulkhead mend their friendship, Megatron laments the loss of Soundwave. However, this convinces Megatron more than ever that the Allspark key in Sari's possession is his priority. But is Soundwave really destroyed? As the episode comes to a close, we are taken back to the sewers, where a music deck is seen flashing red... and a Decepticon insignia appears.

I have been increasingly fond of this new series, which blends modern animation styles and decent morality plots with enough back references to keep the veteran TF fan interested. There were several references in this episode. The appearance of Kremzeek in a "Stand By" message from a news broadcast is one such example. They chose a most interested way to introduce Soundwave. Instead of being an established lackey of Megatron's, Soundwave is instead a new lifeform that seems easily influenced but dedicated to leading machines towards human upheaval. This served to be his downfall as he trusted machines too much.

The moral portrayed was of friendships and jealousies. While most people thought Bulkhead was jealous of Sari's new toy, Bulkhead was showing concern for a friend. Although no one else could see it, he stood by his conviction. This did play on his emotions, but he forgave Sari for her doubts and was able to pull their friendship back together. One of the better episodes, and knowing Soundwave will return later makes the series all the more worth watching. Maybe next time, Laserbeak will join the show.