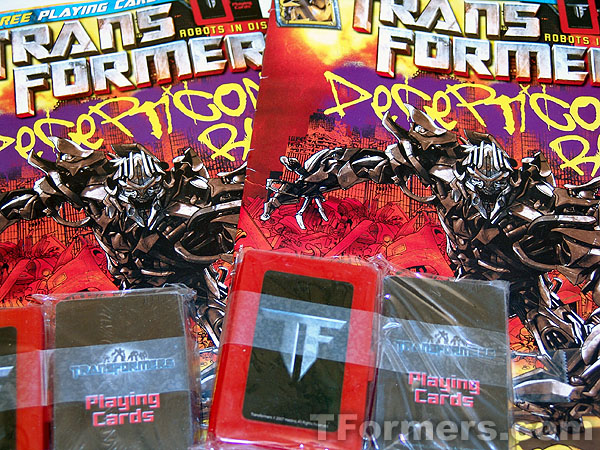 The game is ON in this month's #9 Transformers Magazine from Titan Publishing. Not only do you get the exclusive pack-in set of Transformers playing cards and case. Everything's Turned Upside Down - There's some serious plot movement in "Twilights Last Gleaming" Part 1, the sequel comic by Simon Furman. Additionally, Discover life on Mars in the Movie as the Prequel comic continues. Get in on the foil for Magamtron's grand plan in the The Gathering Part 9. Have a look at this month's Top Trumps from Hayes Publishing and much more! 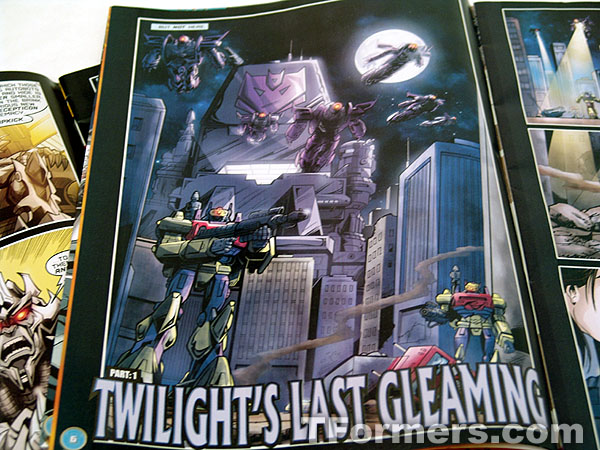 Decpticons Rule OK... The "Transformers" movie ended with a somewhat victorious tone. Too bad its all WRONG. What we weren't told was when Sam deafeated Megatron, the energy of the Allspark traveled through the Decepticon Leader to be unleashed on planet Earth. Technology of all kind are waking up ready to meet their Decepticon leader. A guerrilla war is building fueled by a growing zombie robots force. Six Autobots wait on the moon for a last ditch resuce effort. Arcee, Longarm, Armorhide and other wait for Ironhide's call. Meanwhile, Bumblebee and Mekehla penetrate Decepticon HQ only to make a shocking discovery. 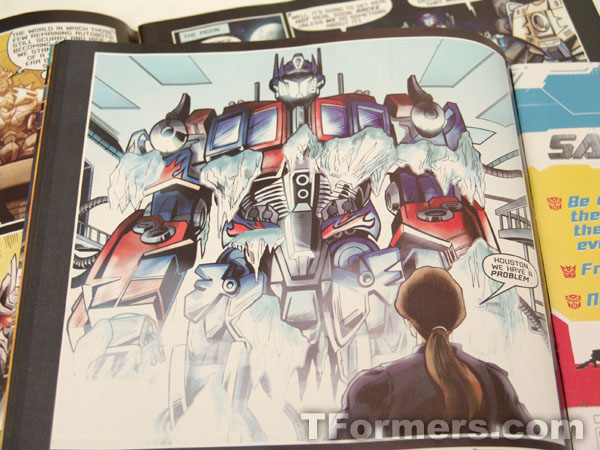 This month Titan gets under the hood of "Transformers" Scorponok. The dirt digging Decepticon is one of the most elusive robots ever seen on Earth. With the help of corkscrew pincers that move at 1500 rpm he moves underground through dirt and rock without detection. Scorponok is often deployed for post-battle recon or an assistant to Decepticon warriors because of his special chameleon mesh armor plating which allows him to camouflage itself against most any background or surrounding. Check the mag profile for lots more details on the scaled down but still scary Scorpy. 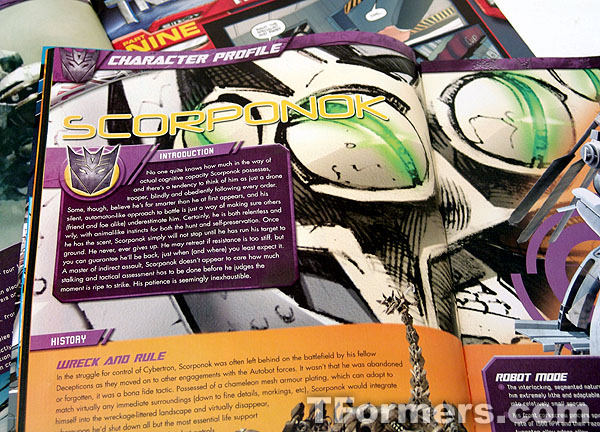 Movie Prequel Part 9 continues in St. Louis Missouri. In disguise, 76' Camaro Bumblebee is gathering information on the Ice Man. A cyber cafe closed after hours offers a chance query on the Human's world wide database. The Autobots' search is rewarded with a hit on a story about a discovery by Captain Archibald Witwiky, "The Legend of the Ice-Man." Kentucky, USA - Sector7 has just the right bait for a trap. After one hundred years, the plan begins to unfold. Tactics of deception employed. Now it is wait and see. Meanwhile on Mars, the first sign of intelligent life is discovered by Decepticon protoforms. 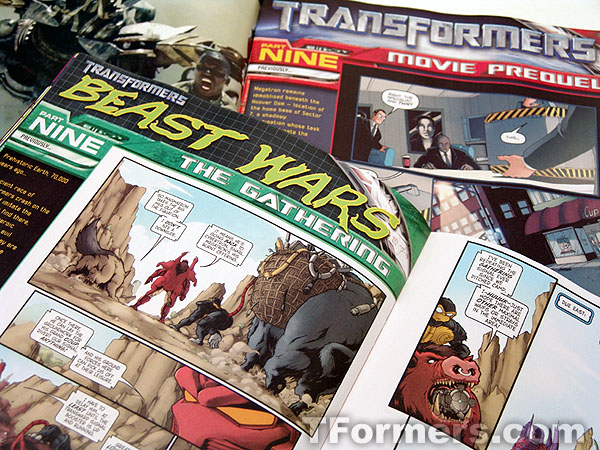 Part 9 Beast Wars Gathering gets intense as Razorbeast and his Maximal co-horts have unraveled Magamtron's plan for Megatron and a return trip to Cybertron where he will have a clear shot at a defeat of the Maximals and possibly control of Cybertron itself. Their only hope it to delay the Predacons long enough to employ the Transwarp signal booster. It's up to Razorback and Optimus Minor and any responders to The Gathering signal now. Tripredacus Agent deploys his sentries while Magamatron readies for his return trip. Two Maximals are ready to divert the event when an unexpected visit is paid by none other than Grimlock! 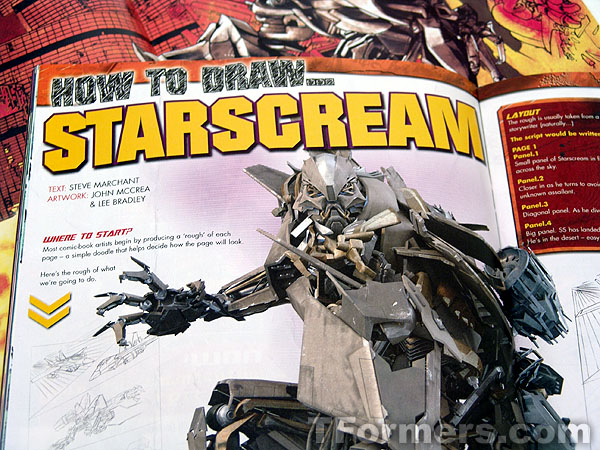 So you want to Draw Starscream? After a so many years doing them, Titan's got the comics thing down ya know. They're sharing the love with the fans by showing us how to draw them bots ourselves. They've broken it all down from starting with the supplies needed to create a simple sketch to finishing your pencils, tips on inking and how to add the final touches. Keep at it and who knows, you may be drawing for Titan or IDW yourself one day. 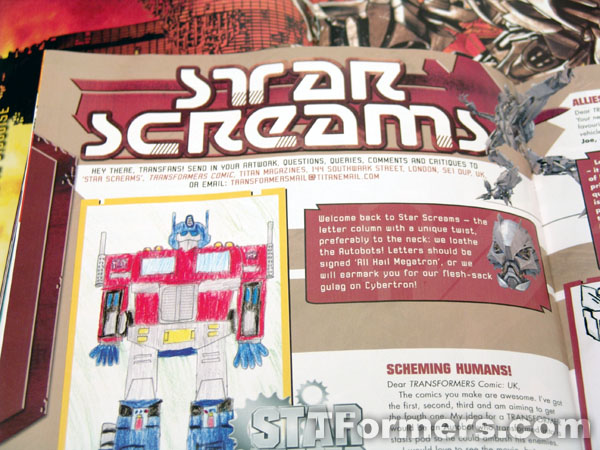 The Star Screams section never disappoints with more great fan letters, artwork and images submitted by Transformers magazine readers. We are so jealous of Ben Harris and that huge Transformers Armada he's been building for 5 years. Nice work Ben. Got any wants or trades? ;) 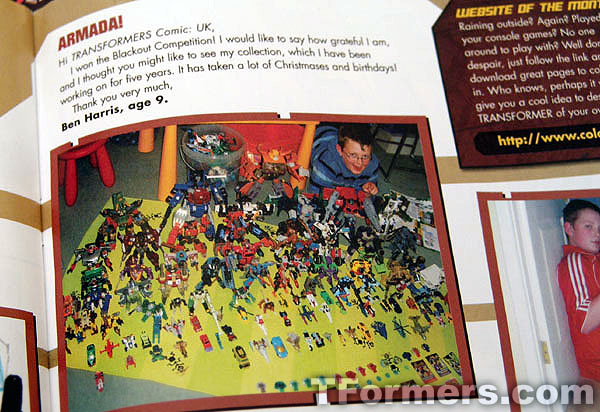 Be sure to keep an eye out for the next issue #10 of Transformers magazine on March 27th! The Movie sequel comic continues with what has to be an AWESOME encounter in NATO versus Starscream. Also get a First Look at Transformers Animated and the way cool Transformers Foam Missile Launcher exclusive pack-ins.