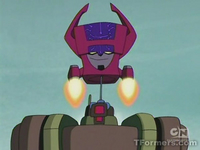 This episode focuses heavily on the development of the new human villain Henry Masterson, an uber-geek that builds a Headmaster and Bulkhead’s problems with destroying everything. First, let’s jump this week’s episode innards and commentary afterwards, as usual.

The Beginning of Headmaster
A Sumdac employee Henry Masterson was goofing off and a rocket managed to head towards the city. Sumdac, very angry, fires the man.

Bulkhead is conducting an interview about his friendly self, but winds up getting blindsided with destructive nature by the robotic reporter (some things never change). During the interview, Optimus Prime tells Bulkhead about the missile and they can’t reach it in time, so he’ll have to take care of it first.

He responds and runs off to the scene. When he arrives, he grabs a car and launches a car into the air all the while winding up his wrecking ball. He connects with the car with the ball, sending the car into the rocket, saving the city; however, when 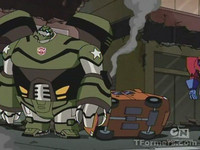 the rest of the Autobots arrive, they see absolute carnage. The buildings have lines of destruction where the wrecking ball smashed into while getting wound up and the asphalt in from of him is indented when he retracted his wrecking ball.

Bulkhead notices the absolute destruction of his city-saving nature, but it gets worse when the robot journalist begins his reporting and is smashed by the car that Bulkhead had previously used as a projectile. An Evel Knieval-dressed kid starts to cry, and it gets worse when Bulkhead tries to help. The mom says he should be ashamed of himself. Those stupid humans with their non-gratitude selves.

Expressing Yourself
The Autobots are back at their base and Bulkhead is beating himself over a little wreckage in the city and how to show people that he’s a good person. Sari suggests art, which Bulkhead decides to give a try.

He begins to do some art including some paints and sculptures, one which was an accident from Ratchet’s blowtorch. While painting a portrait of Bumblebee, Bulkhead fails horribly because 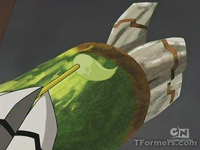 instead of painting Bumblebee, he paints his painting arm instead.

Bulkhead breaks his paintbrush and destroys his canvas in frustration, ready to give up. Just in time, Sari runs in to give Bulkhead some good news, though: she just booked him a spot in a real art gallery in the city.

Bodysnatching
After Sari’s revelation that his artwork will be showcased at an art gallery, Bulkhead, in fear, runs through an external wall and away from the Autobot headquarters.

Meanwhile, Masterson is playing Rock’em Sock’em Robots with his Headmasters – one with Masterson’s face taped on and another with Sumdac’s face. With a final blow, Masterson beats the Sumac Headmaster, but his crumbles over as well due to the heavy head. This gives him an idea of how to support the weight.

During Bulkhead’s walk through the city trying to get over his sadness and frustration, he is hit by a surprise attack that packs a big electrical shock, knocking him out cold. It turns out to be Masterson in his float Headmaster head and a little laser action happens.

Bulkhead wakes up feeling funny, and it turns out that his body is gone, leaving only his head.

Expressing Yourself: Part 2
While the rest of the Autobots attempt to find Bulkhead’s body, Bumblebee and Bulkhead’s head have a little bonding time. 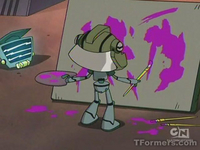 Bumblebee tries to help Bulkhead with his creations by creating a Stikfas-type model, but winds up burning it down.

Finally, Bulkhead gets a body but it’s only a little one, which is enough to paint with.

All of a sudden, he starts running in place. He said he feels his body is running through walls, but is unable to control it. Bumblebee checks the news and sees at the local nuclear power plant, Bulkhead’s body with a Headmaster attached to it (which explains this).

Masterson hijacks all local broadcasting frequencies and demands in return of his not destroying the city with the solar fusion core, that he is paid $700 billion dollars.

The Rise of Headmaster 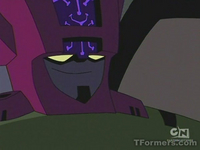 As Sumdac, Dennis Franz, I mean Captain Fanzone, and Prime overlook the power plant, they decide how to deal with Masterson and his plan. Prime suggests paying him and divests his plan to the rest.

The Autobots, with a human or holoprojection in each vehicle, roll towards the power plant with Prime sporting a Generation 1-style Prime trailer.

They come into the plant where Masterson confronts them with his Headmaster with Bulkhead body. He demands the people to step out of their cars, but then reveals that regardless of the payment, he will still destroy the city.

Sumdac, unfazed, suggests that Masterson checks the trailer to count all of his money. When he does, he is confronted by the head of Bulkhead, who attacks him and demands his body back.

Potential Meltdown
While the Autobots and Masterson rumble within the power plant, the humans attempt to stabilize the solar fusion core. Unfortunately, a rocket from the Headmaster’s head hits the control panel that they humans were working on, rendering the core unstable.

The Autobots manage to get the better of Masterson but he disconnecting from Bulkhead’s body and flies away, trying to escape. Bulkhead curses that if he had his wrecking ball he could stop Masterson.

Prime has an alternative. Bumblebee throws Bulkhead and latches onto the pulling cable that Prime shot out. Prime throws Bulkhead at Masterson, which causes him to drop to the ground, surrounded by the Autobots. But Masterson has one final trick up his sleeve: every Headmaster has a back-up body, which extends out and he runs away. 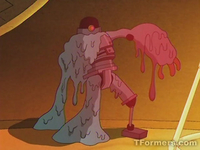 Before the Autobots can chase him down, Sumdac calls to their attention the unstable core. Bulkhead, now with his body back but his head on backwards, suggests they use his art and build a sacrifice robot in place of Prime going in. The robot heads into the fusion core and manages to stable it before shutting down.

The Art Gallery
Bulkhead’s artwork is being displayed at the local art gallery, being admired by many people. Prime says that he is proud of Bulkhead, especially Bulkhead’s initial artwork of the Autobot family.

Episode Thoughts
Overall, this is a solid episode. The episode gave itself some solid humor and some new relationship dynamics between Bumblebee and Bulkhead.