Wow, the Elite Guard, huh? It’s definitely something we have all been anticipating, the arrival of Ultra Magnus, Sentinel Prime, and Jazz, and most have been living vicariously through the leaked sketches. Well, let’s get started with our weekly review.

Aftermath
Optimus Prime, Ratchet, and Bulkhead are cleaning up city after their battle with Megatron and the Decepticons. Bulkhead is discouraged to find that even though they saved the world from the Decpeticons, they are still lumped together. Ratchet assures that they are heroes, no matter what the perception is.

Meanwhile, Sari and Bumblebee are trying to keep the Sumdac company together by answering calls and pushing a lot of paper. A board member contacts Sari to express the board’s worries that she is spending too much money looking for the missing-after-the-last-episode Isaac.

Sari affirms that the name of the company still bears the name Sumdac, and as long as that happens, she will remain in charge.

The Elite Guards Arrive
Just then, a ship flies into the Detroit area and lands in the city. Fanzone and company are already there, and the Autobots arrive a little afterwards. Optimus asks Fanzone to let them handle it, but he rebuts him due to the previous events. 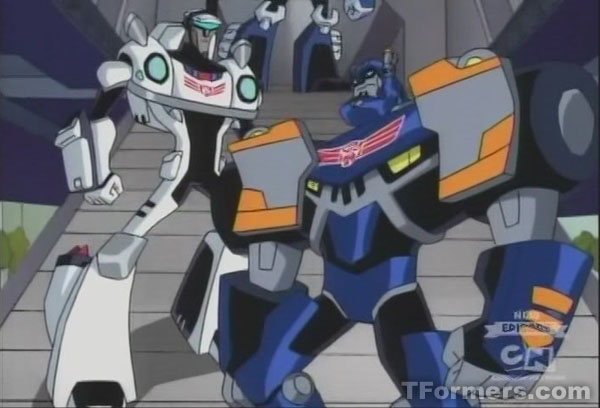 The ship opens up to the emergence of Jazz, Sentinel Prime, and Ultra Magnus. Learning about organics from Sentinel Prime’s encounter with the spiders, Ultra Magnus orders to have the Autobots shielded from the humans and the Earth Autobots decontaminated.

Internal Strife
It is pretty obvious Sentinel Prime’s disdain for the “Elite Guard wash-out” Optimus right from the get-go. Jazz tells him to tone it down and that it’s not the place.

Ultra Magnus tells the Earth Autobots that all they want is to retrieve the AllSpark and leave. However, he is confronted with the truth that the AllSpark has been scattered during their battle with Megatron. 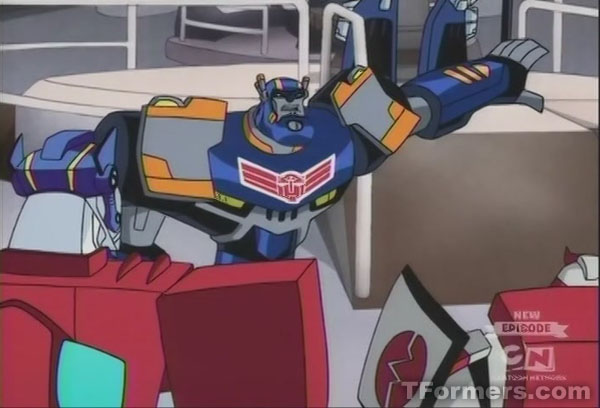 While the Elite Guards are very skeptical that maintenance robots defeated the likes of Megatron and the Decepticons, Sentinel Prime is the most vocal about their disbelief. He says that during their scan of the planet for Decepticon signatures, they were unable to find any, which was met with a rebuttal by Bumblebee.

The bickering continues, with the Earth Autobots sticking up for Optimus and Sentinel disregarding all claims of Optimus’ heroic actions.

Magnus demands proof, and Optimus Prime complies. Sentinel and Ultra Magnus both transform into their vehicles, which were commented that they do not exactly blend in, and the three roll out of the ship towards Optimus Prime’s proof while the rest of the Earth Autobots stay with Jazz.

The Space Bridge Initiative
It is revealed that the Decepticons are hiding in an area that protects their signatures and that they will remain hidden until the time is right.

Megatron divulges to the Decepticons that the capture of Professor Sumdac is related to the Autobot-exclusive technology, the Space Bridge. Megatron was able to gather some information during his battle on the Autobot ship; however, some specifications are missing for the technology. Isaac will be used to reverse engineer a Space Bridge for the Decepticons to return to Cybertron and conquer the planet.

During his work, a service robot carrying a box for Sumdac goes haywire and throws the box it is carrying. Lugnut accuses Sumdac of attempting to sabotage Megatron’s plans for world domination. Sumdac denies this and claims the robot did it all on its lonesome.

When Good Police Robots Go Bad
Sari receives a call from the representative board member to let her know of the problem at the plant. Sari asks him to do it, but the adult smartly trumps a child by acting like a child and bringing up that the company still holds the Sumdac name.

Sari uses her Autobot key to cut through the shield to the Elite Guard ship and enters. She finds the Earth Autobots and alerts them of the problem at the plan and asks for their help. 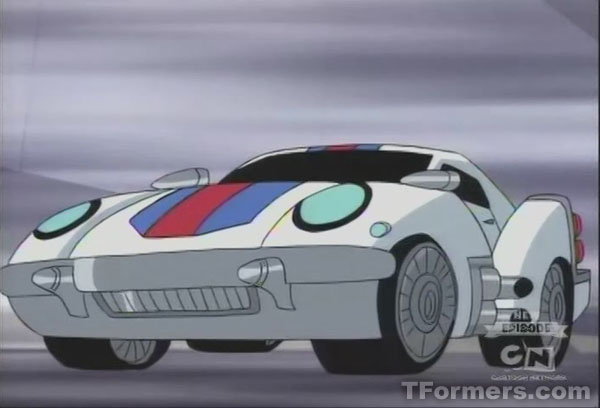 The Earth Autobots convince Jazz to allow them to go and find a loophole in Ultra Magnus’ orders. With Jazz now convinced that organics do not spew things, he agrees and shows his old Generation 1-self by wanted to take his new wheels for a spin.

The Neverending Battle
Arriving at the plant, the police robots begin their assault on the Autobots and Sari. Outnumbered, Ratchet calls Optimus for back-up, who immediately rushes to the plant.

The Autobots are fighting and Jazz witnesses Prowl ninja abilities. In a non-showing-off way, Jazz wields dual nunchaku and shows that he’s at a higher level of mastery of the circuit ninjitsu. 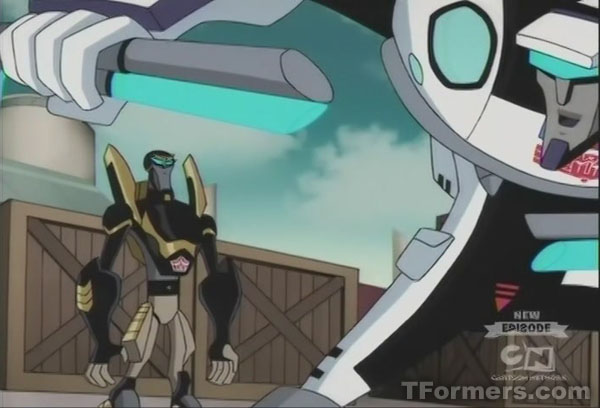 Prowl is distracted and he is knocked down. About to be scrapped, Optimus Prime “cuts” in and destroys the robots.

The gang finds that unless they shut down that assembly line, these robots will never stop. Optimus instructs the Autobots to hold off the robots while he and Prowl sneak Sari into the plant. With Jazz joining them, the four make their way into the plant and to the control panel. 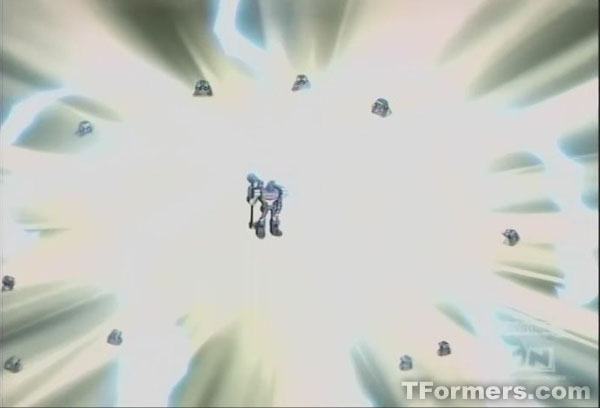 Sari stops the line with her key, and Sentinel Prime comes in and tries to arrest Optimus for treason and insubordination. Optimus finally snaps and says that no matter how much of a wash-up he is, they are still the same rank and that he cannot order him around. Optimus tells Sentinel to back-off and that Sentinel is on his turf now and he is in charge.

Meanwhile, Sari’s key becomes stuck in the control panel. Optimus cuts the control panel into pieces to release the key, and at the same time is available to gather a piece of the AllSpark to present to Ultra Magnus as evidence.

Semi-Vindicated
With the presentation of a piece of the scattered AllSpark, Ultra Magnus says the validity of Optimus and the Earth Autobots’ story becomes clearer. Sentinel Prime tries to say otherwise and that Optimus is nothing but insubordinate and a wash-out. 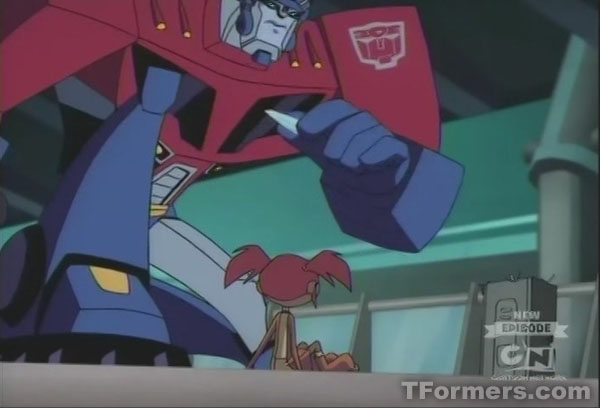 Ultra Magnus rebuffs him by saying that even though Optimus is rough around the edges, he has proven himself to be a leader, and most of all, has received the loyalty of his troops. He mentions that Sentinel should learn a thing or two about loyalty.

Sari Unknown
Back at the Sumdac tower, Sari and Bumblebee attempt to enter her father’s office but she finds that she has been locked out. On the screen next to the door, she is greeted by the board member who reveals he has been voted as the new CEO of the company.

Sari discounts this claim, saying that it is still Isaac’s company. The board member disagrees, saying that Isaac did not leave any documents discussing a successor, and that since there is absolutely no data or Sari, the Sumdac company does not have a defined successor. 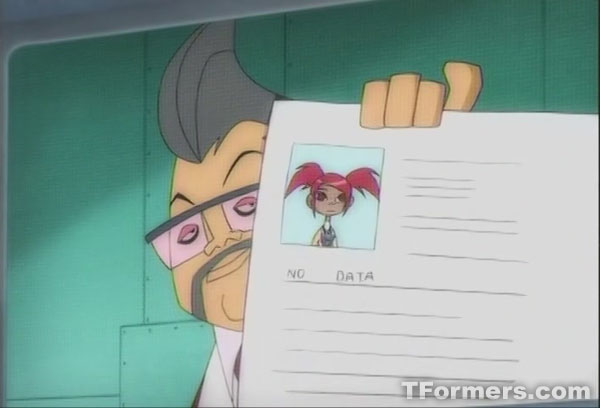 Thoughts
So what’s up with that? Is Sari a robot as many people have speculated? We don’t know about that, but for a kid, that’s ridiculous! I think I would cry!

As we have found out before, Sentinel Prime is an obnoxious Autobot. He tries to trump Optimus every chance he gets, even when he tries to teach them the rules of the road, which leads to Sentinel driving onto a bridge in construction and flying off.

Ultra Magnus seems like one of those quiet leaders who wait until all things are considered and then speaks. He is one powerful Elite Guardsman, and I look forward to his actual fighting rather than just the motions of lifting his humongous staff, and putting down his humongous staff the entire episode.

As for Jazz, he seems to be the most accepting of the Earth Autobot crew, and I am interested if Prowl and his commonality of circuit ninjitsu will be further explored. Also, headphones are part of his head, which is a great homage to the Generation 1 character. While the old character’s love for music will bleed into this one is unknown, but at least one piece of the personality is evident: his love for cool things, e.g. his sleek set of wheels.

That’s it for this week. Overall it’s a great episode and introduction to the Elite Guards. Join us in two weeks when that pesky purple head returns. Will be snatch another body? We will have to see.