Starscream has been and always will be one of the Transformers most beloved characters. It is no surprise then that Kaiyodo Revoltech has done a figure to honor this beloved treacherous figure.

Starscream is Kaiyodo’s 46th action figure and its 4th Transformer in its line of super articulate figures. With his signature grin and devastating null rays, Starscream never looked so good. 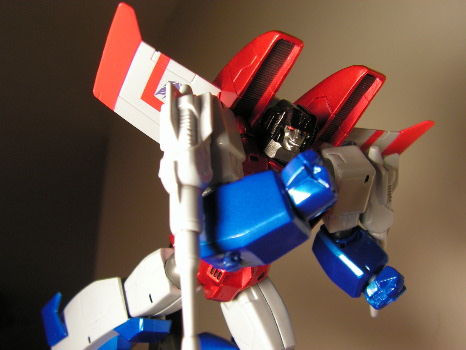 Revoltech has once again copied the Pat Lee art work. Everything from the head down has the workings of the former Dreamwave owner. I don't mind the look of Pat Lee's Transformers, but gee wiz, he was not the only artist to draw them. Don Figeroua is the man too. I keep saying it. But this is the internet, no is listening anyway.

Gone is the poseable neck which was seen on both the Megatron and Prime. This time they molded the neck on the head. It makes the head movement limited when trying to pull off certain poses but not by much, you really have to turn the head for it to move. Mines was a bit tight but after some twisting hear and there it should loosen up. Also when trying to pose the head, you have to try and turn it through Starscream’s air intake ducts. This can be tricky if you have large fingers but it’s pretty easy. Also because of the intake ducts on Starscream’s shoulder's, you cannot lift the arms up very high because when you do, it just stops at that point. You can still get one or two good poses out him from certain arm angles. 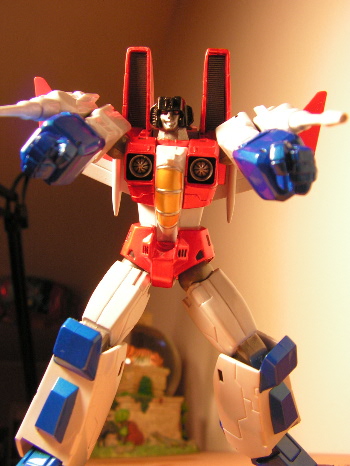 Starscream has a durable feel to him. The wings are made from hard plastic. I thought they were rubber when I first got it but nope, they are very sturdy. Even the Null Rays are sturdy so don’t worry, its one tough figure on these parts.

There is also a stand which is something that did not come with the first 3 Transformers from this series. Revoltech made sure to include one with Starscream and Rodimus. This is great for pulling of some of those aerial poses. 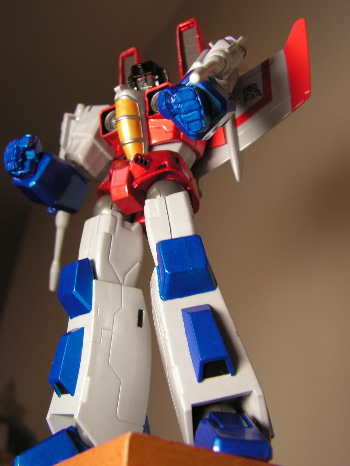 Other than the air intakes on the shoulder which get in the way of certain poses and the once again Pat Lee design, I really have no complaints about this figure. It really does look awesome and it’s durably made.

Around the Horn,
ARTIMUS ONE