Return of the Headmaster - Animated - Episode 18

The Return of the Headmaster basically gives you the gist of the whole plot in this episode. However, what it doesn’t give away is the hilarity that ensues in this episode. The episode that marked the debut of Henry Masterson, well-titled Headmaster, will not prepare you for this one.

Let’s get started, shall we?

The Return of the Headmaster
The episode starts with Sari packing up her bags, angrily stomping and ranting about the new CEO of the company, Porter St. Powell, kicking her out of her home. Powell explains that he needs the area for a new research and development employee who will help recuperate the immense costs that Sari piled looking for Isaac Sumdac. 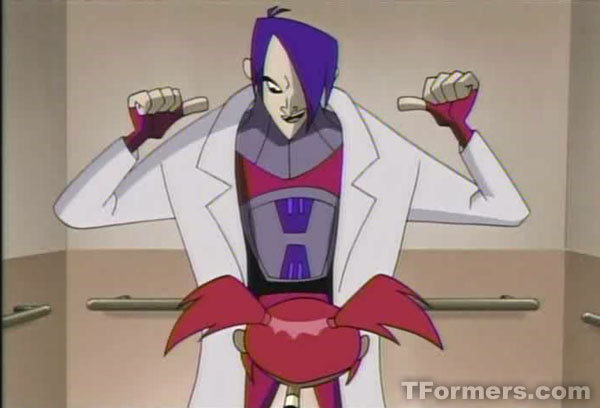 As she is leaving, she finds out that Henry Masterson has been reinstated at the company to lead the effort.

Bad PR
Meanwhile, Sentinel and Optimus Prime are attending a press conference. Sentinel is speaking in extremely obnoxious, borderline insulting words, to the attendees of the conference. When Optimus is asked a question by a press bot, Sentinel steps in and speaks for him, commenting that he does not want a lowly repair bot like Optimus saying the wrong things. 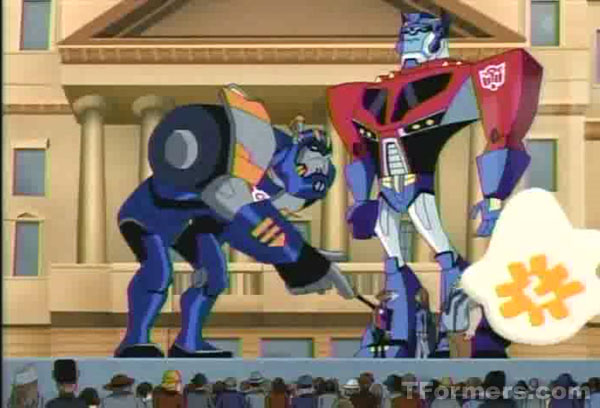 After escorting Sari out, Powell tells Masterson that his plan is to target military robots, something that Sumdac would never go for. Masterson starts ranting in his uber-geekage speak and says that he needs a new alien robot to begin his research. Just then, Headmaster sees Sentinel on television at the press conference, and decides to snatch his body.

To start his plan in motion, he calls in a fake police report to lure Sentinel to an unpopulated area.

A Prime Adventure
The Primes respond to the incident and split up to scope out the area. Needless to say, Headmaster ambushes Sentinel and steals his body, to the amusement of Optimus, and to the immense embarrassment to Sentinel. Optimus is alerted by Bumblebee that Masterson has returned and prompts Optimus’ plan to question Masterson about the body-snatching incident. 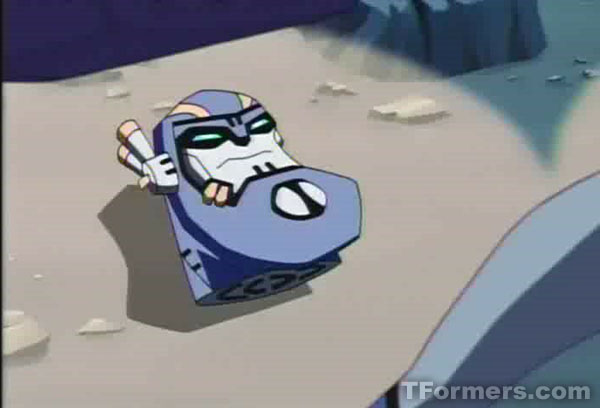 Just Like Home
Now that Sari has been kicked out of her home, she turns to the only other place she has left: the Autobot HQ. While there, Bumblebee and Bulkhead attempt to make Sari happy by trying to do things with her that they themselves would enjoy.

It is an immense failure that leaves Sari even more depressed. Further saddening her, the Autobot couple do not have any human food, so they compile together some food that they think she might like. This includes an already-eaten fish, cans of oil, and a live bunny. 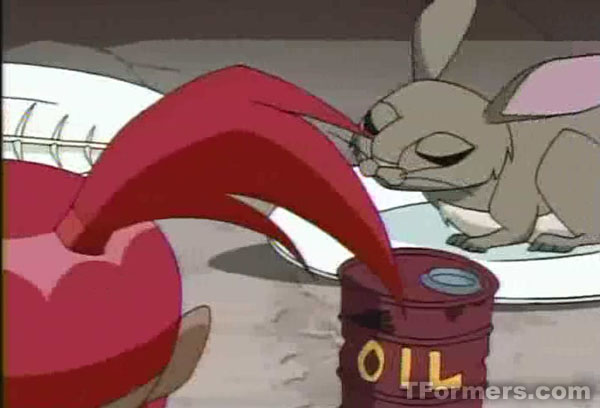 Finding the Body Snatcher
When Optimus tries to talk to Masterson at the Sumdac tower, Powell denies him access and turns him away. After he leaves, Powell calls Masterson about the situation, which Optimus intercepts and traces Masterson’s signal to the docks. 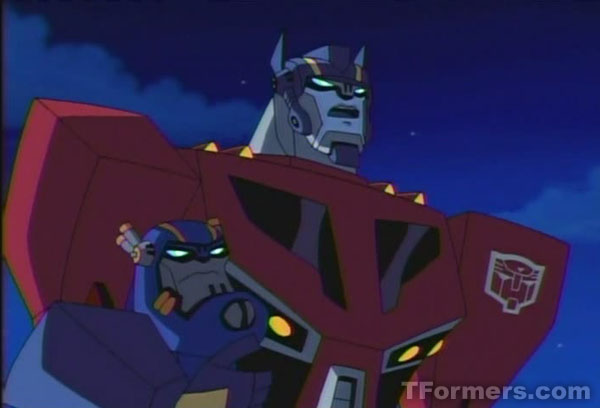 When they arrive at the docks, they find a greeting party composed of Sparkplug and Tutorbot, whom have been turned into Headmaster’s puppets. A hilarious battle ensues, with the puppets shooting at the Primes. For a bit, Optimus loses Sentinel, who then has to fend for himself by rolling around to avoid the shots.

Back at HQ, Bumblebee and Bulkhead try to teach Sari some cool stuff, but are unable to think of a topic. Sari suggests one: why there isn’t any record of her being Sumdac’s daughter. The Autobot couple start to ramble off some ideas, including the very-often discussed reasoning that she’s really a robot.

Prime versus Prime’s Body
After defeating the puppets, Optimus and Sentinel board the ship. They find that Masterson has already become accustomed to Sentinel’s body. The battle begins with Optimus quickly losing his ax. However, he gains Sentinel’s shield arm, which he uses to detach Headmaster from Sentinel’s body. 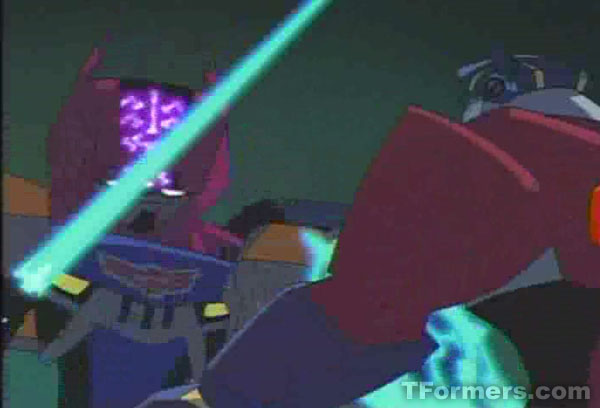 When Headmaster tries to run, Optimus kicks Sentinel’s head and knocks him down, and arrests him.

Release
While Masterson has been arrested, he doesn’t stay so for long. Powell shows up and gives all of the reasons that he cannot be arrested, including whatever crimes he is being charged for occurred on Sumdac property, international waters, and alien robots do not have civil rights. Reluctantly, Fanzone releases Masterson. 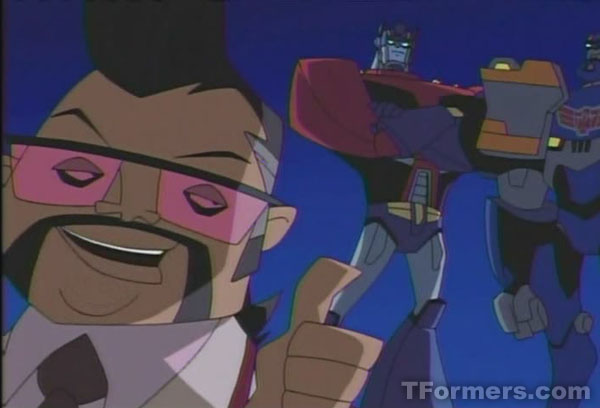 Leaky Sari
Bumblebee and Bulkhead are perplexed at how to make Sari feel better, but Prowl tells them to listen, and she will tell them.

When the couple follow Prowl’s advice, she starts crying, or “leaking,” according to Bulkhead. Bumblebee tells her that she can leak whenever she wants, and they are there to listen, which cheers Sari right up.

Speaking Up
Back at the Elite Guard HQ, Ultra Magnus is questioning Sentinel about his recent headloss. However, Optimus speaks up and covers Sentinel’s embarrassing adventure. When they depart from Magnus’ presence, Sentinel thanks Optimus for his help, and they shake hands. 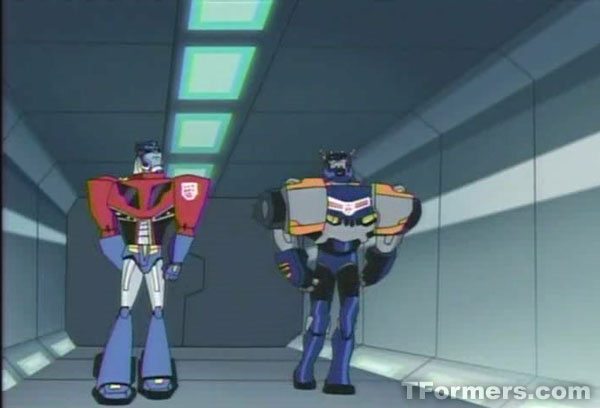 Thoughts
This was a great episode. Other than Sari getting kicked out and Masterson now being what seems to be a permanent member of Sumdac’s corporation, the episode didn’t really feature a lot of move in the story itself, but replaced it with fast-paced action and hilarity.

I apologize if this list is long, but these are well worth it. Some funny moments this episode:

Sentinel is still afraid of the organics and their possible danger to robots. After shaking hands with the Mayor of Detroit, he uses disinfectant.

When Headmaster calls in the fake police report, Fanzone calls Headmaster ma’am, which he corrects Fanzone about at the end of the episode.

Who would have known that they could fit a “l33t” joke in Transformers: Animated? Well, they did. When Optimus loses his ax, Masterson says that he’s so l33t. Optimus rebuts by saying he doesn’t know what that means.

Saving the best for last, the dynamic between the Primes is the highlight of this episode. The bickering and insults between the two is an absolute joy to watch, and is absolutely hilarious. I look forward to more buddy adventures between the two, as the writers really did a great job with this pairing.