So far for the movie, we have had 2 figures grace the shelves. The first being the "old" Bumblebee guised as a 1976 Camaro and then the "new" 2009 Camaro Bumblebee. The latter seems especially hard to track down and was a scalper's haven for several months. Now, more Bumblebees are coming our way. One will be a Premium version of the original "new" Bumblebee. The other is the basis for the review. Bumblebee gets a new reversed paint job... and something else.

With pictures of him all over the internet in robot and vehicle mode, Bumblebee began to feel a little bit uncomfortable. People recognized him everywhere. More importantly, new Decepticons arriving on Earth found him easily, which put Sam and others in danger. With Mikaela's help, he picked out a new color scheme for his armor plating that made him harder to spot, and also made it easier to sneak up on any Decepticons that handered into the range of his plasma cannon.

Can someone please tell me how a black Camaro (in fact, a Camaro which isn't even out in mass market yet) with yellow comp stripes is supposed to make it EASIER to be undetected? I can't say the new paint job is very flattering. And the fact that it's a matte paint job instead of gloss further makes you wonder what the point was. The points of detail are also mixed. The headlights have no detail, but the foglights do. The only other detail difference in Alt mode is that the door handles are chromed.

The quality control seems to be keeping consistently mediocre. No matter how hard I tried, I could not get the right rear quarterpanel to line up properly. I also noticed very minute scratches on various places. Transformation is exact to the first mold, with no changes. 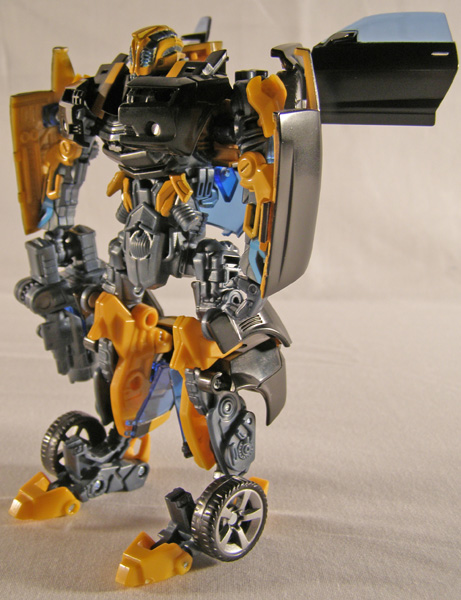 Unlike the alt mode, there are some very noticeable differences in robot mode. First, the quirk with the license plate in the groin area is now gone. Also, if you look hard enouugh some of the darker colored plastic used on the limbs is slightly lighter. There is also some blue accenting on his forearms. The Autobot insignia is n a medium blue background. 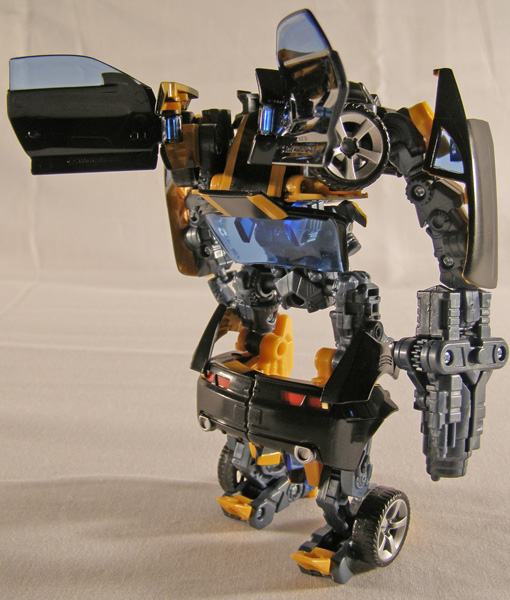 Perhaps what is most noticeable is the head. For this figure, the combat face is used. It is nicely detailed with countors in the optics and a mixture of blue, black and yellow. However, no light piping for this head. Other than that, the rest of the figure is the same as the original release. From my understanding, the Premium Bumblebee being released soon will also have the combat shield for the face. Therefore, that leaves you with 2 choices. Buy this figure, or wait for the Premium. Being that I think the black doesnt' suit this mold right, I almost wished I waited for the latter decision. However, for $10 retail it's hard to pass up. 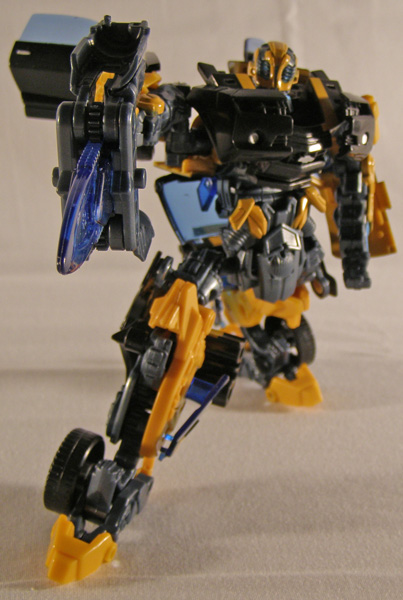