One of the non-movie molds released was the Decepticon Dropkick. There seemed to be a consensus that Dropkick was one of the best, if not THE best non-movie character released to date. Perhaps Hasbro is banking on that repeat success. The latest (and perhaps last) of the non-Premium waves hitting shelves is an Autobot counterpart known as Salvage.

Another of the new Autobots brought to life by the final, energetic bursts from the Allspark, Salvage doesn't really have a lot of ambition. Before being brought to life, he worked with Sparkplug & Son Salvage, and he's pretty sure he was happy then. He's certain he's happy now, with a load of scrap in the back, and Sparkplug's hands in their accustomed place on his worn old steering wheel. It's a simple life, but it's one he prefers to hunting Decepticons and fighting all the time. 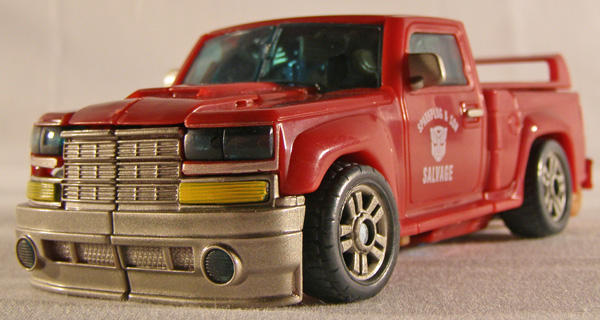 If the specs and the look were supposed to match, it certainly doesn't seem that way. Salvage sports a bright red paint job. "Sparkplug & Son Salvage" is displayed on both cab doors, with an Autobot insignia in the middle. The last thought you would get from looking at it is that of a worn salvage truck. Not every salvage truck has a spoiler, a tonneau and ground effects. Plus, most salvage trucks are more... um... weathered. However, I know this is Dropkick's mold and they couldn't change it much.

There are other minor differences between the two molds. Whereas Dropkick had plastic turn lenese up front, Salvage makes do with amber painted ones. Also, Salvage uses blue tinted plastic for his windows versus the clear plastic used for Dropkick. Beyond that, they're the same in design... right down to transformation. 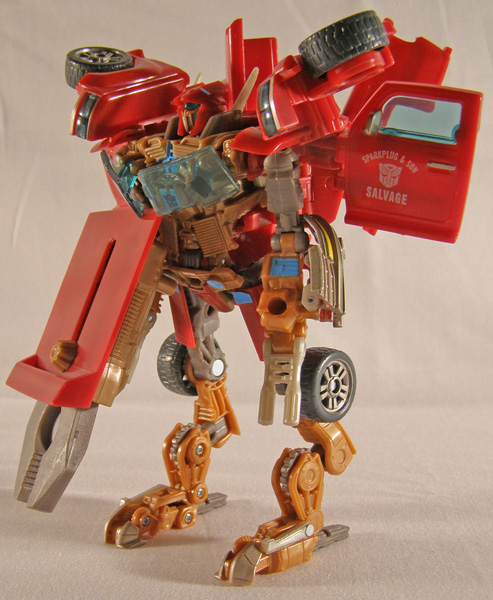 Color can sometimes make a big difference in how a mold looks, and in this case that's no exception. Rust orange shows aplenty in the limbs and chest of Salvage, with some Allspark blue thrown in around various bits. Some silver remains, but not in the same spots as Dropkick had them (the guns and feet, for instance). Even the head sculpt has a different look to it, with blue piping for the eyes. Pay mind that there is no mold differences between the two figures. 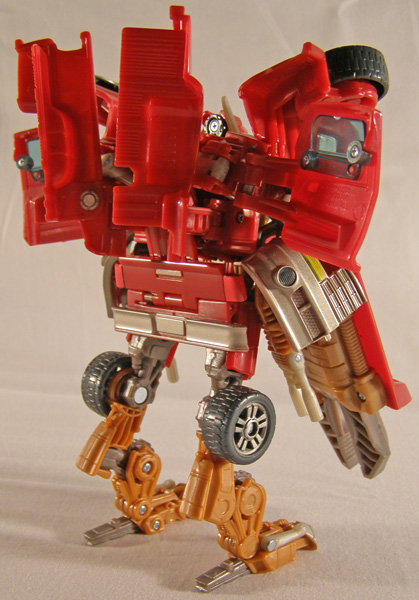 Quality control strikes again! The peg system used to hold the shoulders together, at least with the one I purchased, aren't even sized right. Therefore without modification it's difficult to keep the shoulders in place, especially the right one. Having the tonneau on his right hand doesn't help matters, but fortunately either hand can don the shield/hook. It's stated that Sanford & Son was the inspiration for this mold. While I don't doubt that, I think Redd Foxx would have had a heart attack for sure if he saw something this clean in his driveway. At any rate, it's a great add for the collection 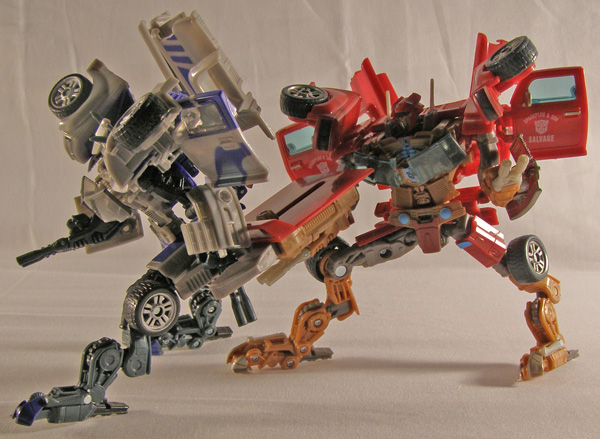