The arrival of a new Decepticon and a new syndicate of previously-seen human villains, plus-one, arrive on this week's episode of Transformers Animated. Let's get started.

The episode starts off with Nanosec fleeing with a wad of cash in his hands. The Autobots are tailing him and find that he’s back to his youthful robbing self. Optimus Prime tells Bumblebee to flank him, but instead, he decides to use straight out speed to try and catch up. 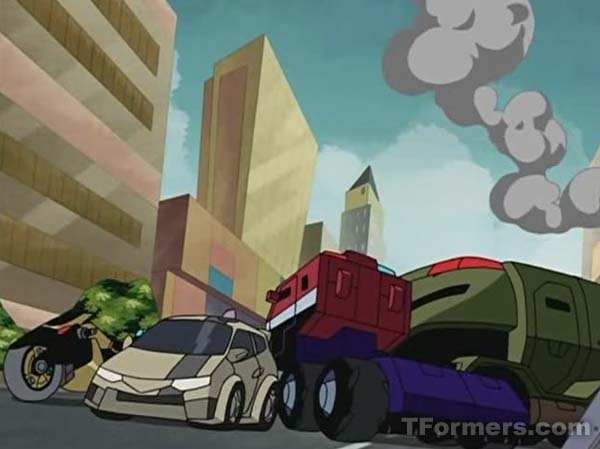 Just when he accelerates Bumblebee is hit with some sort of beam and he freezes up immediately. This causes the Autobots to crash into him and wreck, resulting in Nanosec’s getaway. Prime yells at him for disobeying an order but Bumblebee is reluctant to accept the blame and instead tries to shift it onto the other Autobots with lame excuses.

Prime orders everybody back to the base for maintenance and for Bumblebee to receive a full diagnostic check on his drivetrain. Bumblebee, needing to prove a point, disobeys the order and goes to find Nanosec instead.

Angry Archer’s Back, Too

The next time we see Bumblebee and Sari, they’ve been driving around for hours with nothing happening. Sari turns on the radio due to her boredom and finds that Bumblebee has a police scanner, which he never knew he had either.

The police scanner reveals that there’s a crime in progress, and Bumblebee bets that it’s Nanosec striking again. However, when he arrives, it’s Angry Archer instead, but Bumblebee is still in the hunt to prove something, and pursues him. However, he is once again hit with the same beam that slowed him down the first time, resulting in Archer’s successful getaway.

After Bumblebee recovers, they hear that there’s a 402 in progress, and Bumblebee is ready for another confrontation, despite Sari pointing out that he doesn’t even know what a 402 is.

Turns it is Professor Princess blowing up naughty, violent arcade games that are not nice. When Bumblebee shows up and transforms to try to stop her, she blasts him, and attempts to get away. Bumblebee runs after her but is hit with the same beam as before and slows down. Princess gets away, but Sari sees that there is nothing wrong with Bumblebee and that before he is hit with some kind of external beam, her AllSpark key goes wild. This lead’s Bumblebee to believe it is an AllSpark fragment causing his issues. 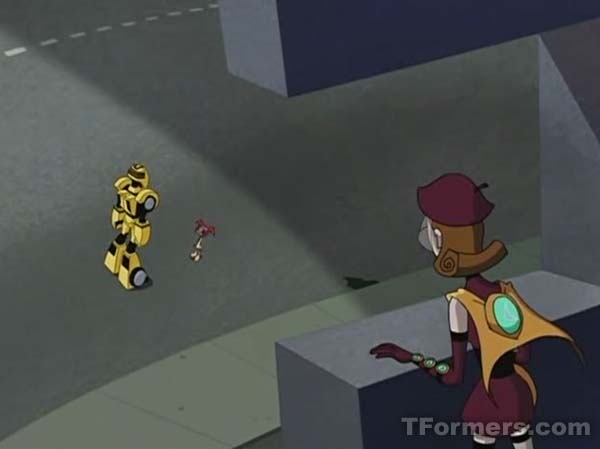 When Bumblebee and Sari are discussing what happened to Bumblebee, the camera pans up to a building behind a billboard, where it is revealed that a person who calls herself Slo-mo has behind it all with an AllSpark fragment-enhanced clock.

A meeting is taking place at an abandoned factory between all four of the mischief-doers, with Slo-Mo telling them everything about what she has done so far. She was the one that helped them escape all of their recent jobs, and she was the one who made Nanosec young again. She is a big fan of their work, but she claims she is an amateur so she wants to grab them all together to form a syndicate.

They all agree and begin to think of names; however, they’re unable to conjure up one that is just right.

The syndicates first order of business is to rob a store. When they come out, they are confronted by Bumblebee, who is easily dealt with by Slo-Mo’s clock. But with Bumblebee out of the way, the real police show up and the syndicate has to flee.

They do not have a vehicle and the police are hot on their tails when Slo-Mo receives a phone call and tells them that the vehicle parked across the street has the keys inside. Slo-Mo smiles and tells the syndicate to get in so they can make their getaway.

Angry Archer states that this a good chariot, but Nanosec rebuts that it’s a SUV. The generic name for the vehicle gives him a great idea for a name for the syndicate: Society of Ultimate Villainy – S.U.V. 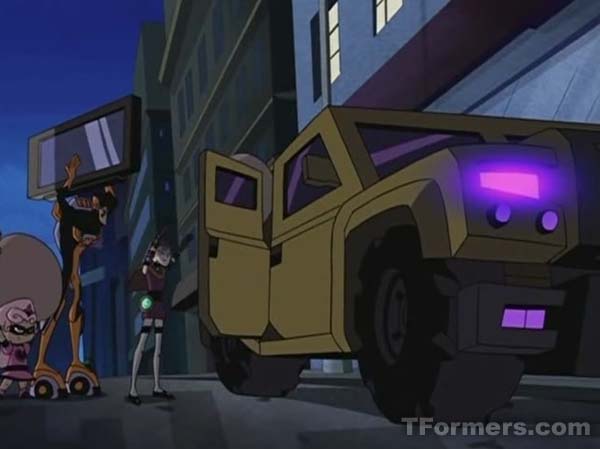 The person who contacted Slo-Mo is now talking to them on the vehicles communication system and comments he’s been eyeing their operation and is quite impressed with their work. He offers to work together and tells them to consider the truck as a back-scratching deal, but Slo-Mo balks and says that it’s only a truck.

The person tells them to push the red button and when they do, a large cannon extends from the back of the vehicle and blasts the police, destroying all of their pursuit attempts in one swoop. While Nanosec is impressed, Slo-Mo tells him that she’s the leader of the syndicate and will not let him muscle in.

However, the person gives them a proposition: help him steal parts to build a new invention that they can sell off to the higher bidder for a “boatload of cash.” Slo-Mo’s interest is piqued, and asks for a price figure. The person calls the amount of cash equivalent of Titanic. She accepts. 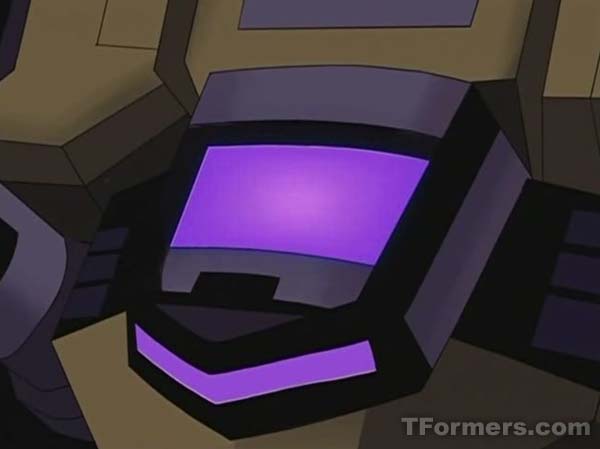 Archer and Princess are attempting to steal something together and Archer decides that his explosive arrow will destroy the padlock that currently stands in their way. However, when he fires at the padlock, his arrow falls down to the ground, and Princess tells him that she disabled all of his arrows because they’re evil. Instead, she blows it up with her “beautiful rainbow” blast and takes a chunk of the gate.

Nanosec and Slo-mo steal a satellite off the roof while they flirt with one another. Bumblebee and Sari are spying on the duo, and Sari wonders why they are stealing a satellite dish, power box, and a bunch of cables. Bumblebee replies that he doesn’t know either, but they’ll keep an eye on them.

SUV is assembling the device with the person on the truck explaining to them how to do it. The person reveals that in order for the device to be complete, Slo-Mo must insert her timepiece, which she vehemently objects to. She tells him that the partnership is off. The person agrees.

It is revealed that the person is not a person at all, but rather a Decepticon named Swindle. He tells them that he’s an international arms dealer and thanks the S.U.V., he now has the slickest weapon in the galaxy and that it’s worth a lot in the upcoming war. Sari tells Bumblebee that they have to call for backup and Bumblebee says he will – once he defeats them himself. 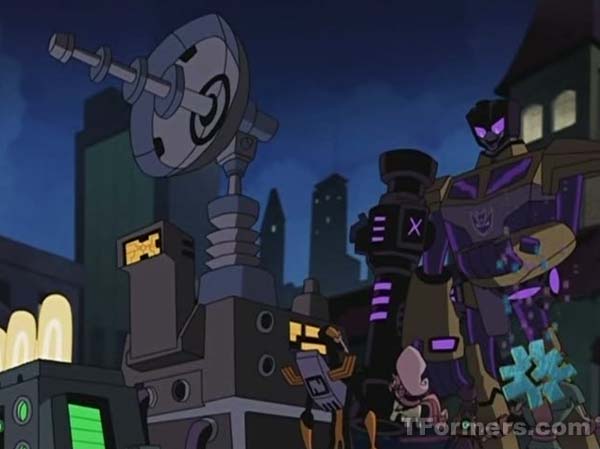 She orders the syndicate to take Swindle out, but he strikes first, dropping them all through the roof. When Slo-Mo tries to use her clock, Swindle uses a forcefield emitter to repel the blast. She continues to blast them when Bumblebee and Sari arrive on the scene to see the blasts going all over the place. Bumblebee backs up into the car park and Sari gives him an ultimatum: call Prime, or she does it for him. Bumblebee gives in and calls Prime to alert him of the situation.

Swindle forcefully takes the timepiece from Slo-Mo and blasts her away to join the rest of her syndicate. He inserts the clock and contacts Megatron, telling him in a roundabout way that he was able to find Megatron’s secret frequency. Swindle pitches him the device S.U.V. just built as one that defeats the Autobots. Megatron is interested only if the product works, which Swindle gladly gives a demo off.

The device slows down all machine and robot in Detroit inoperable. Swindle continues to pitch the device while Sari is attempting to think of a plan to unfreeze Bumblebee. She finds that Sumdac Tower still has power, and remarks that if he didn’t go solo, they’d had a team to assist him.

Just then, S.U.V. arrives and offers their help in order to stick it to Swindle. S.U.V. helps Sari roll Bumblebee into the newly renamed Powell tower, which revives him immediately. To stop Bumblebee from being trapped by Swindle’s weapon again, Sari downloads the forcefield to protect him. S.U.V. offer to help and Sari talks Bumblebee into giving them a forcefield and to join forces. 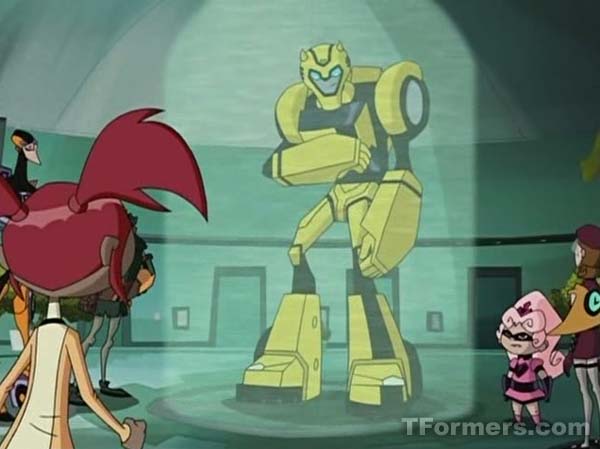 As a last-minute piece of business, Sari uses her AllSpark key to change the greeting bot’s message to Sumdac tower and calling Porter C. Powell a “boogerhead.”

The S.U.V. and Bumblebee crew sneak attack the still-pitching Swindle. Sari distracts Swindle by turning off the device while the rest of the group attacks him and knocks him off the roof of the building. 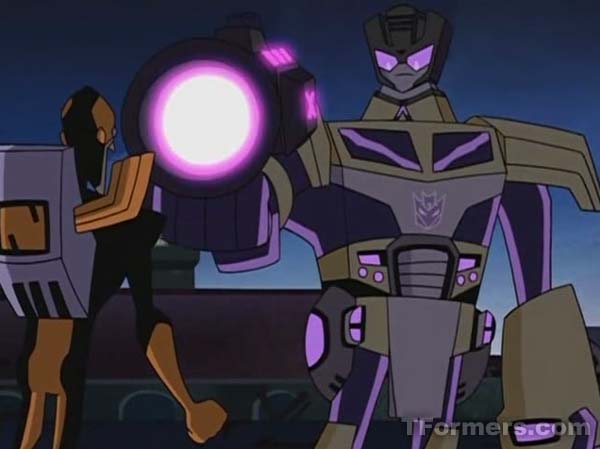 When Bumblebee moves to destroy the device, S.U.V. attacks him and steals the timepiece back. Bumblebee retaliates and hits the timepiece of out Nanosec’s hand. The clock flies over the edge of the building in Swindle’s hands while Bumblebee attacks the syndicate again and takes them all out.

The rest of the Autobots roll up to Swindle and begin to battle. However, Swindle reveals the timepiece but before he blasts them, Bumblebee arrives and turns on his forcefield. The blast from the clock ricochets off of the forcefield and hits Swindle instead, freezing the arms dealer. 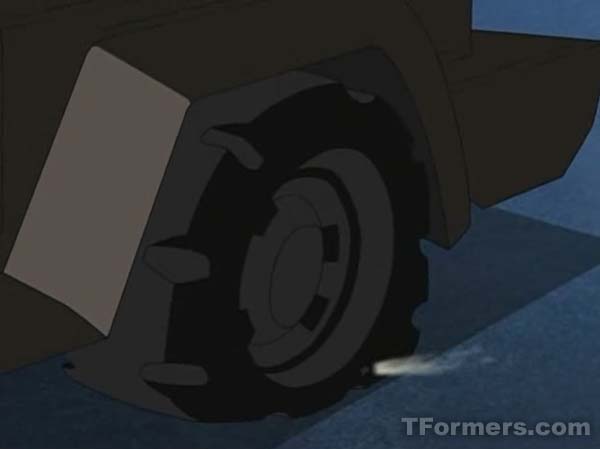 Prime tells Bumblebee that he should have called them sooner, but Bumblebee says that he wanted to show them he still had the touch. After a bit of a discussion, Bumblebee tells them he has learned the lesson that even a star player needs backup sometimes.

The members of S.U.V. are arrested and Fanzone says the vehicle, which he doesn’t know is Swindle, will be disassembled, and his spare parts sold at a police auction.

While the episode was enjoyable, it didn’t move anything forward, and I think I would have enjoyed it more if Swindle was there to help Megatron trick S.U.V. into stealing parts for the Space bridge he’s been trying to build all season.