Welcome to the first of a long string of Transformer: Animated reviews. Animated is the very long awaited TV based figure line that has a firm street date of June 22, 2008. However, WalMarts have been sporadically showing shelf stock early, and I was lucky enough to have 2 such WalMarts in my area that did. This review will cover the 2pk of battle damaged Optimus Prime versus Megatron. Since this is the first review of the line, let's go over some of the common basics. 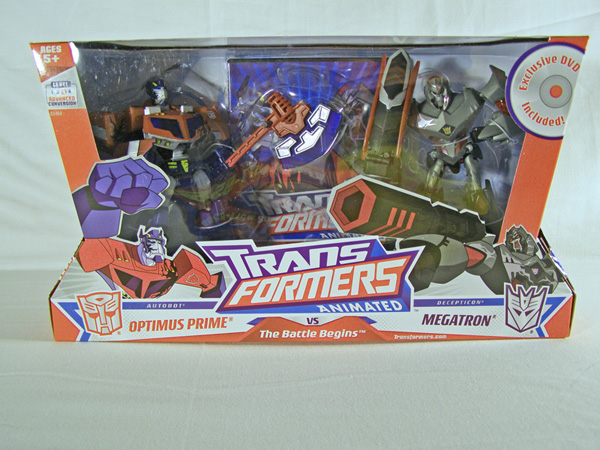 The box design has a reminiscence of Cybertron, with the angular edges. The box is mostly red, with the Animated logo on the front and a headshot of each character on either side. For most of the line, the character headshot appears on the right. On the right side, you will normally see a hyped general description of the character along with a bodyshot. On the left side, you will see a preview of other figures available for that wave. The back features shots of the figure in alt and robot mode, as well as their tech specs. This line also features what is called a "Galactic Powers and Abilities" sidebar which quickly highlights their attributes.

Until now, Optimus Prime never thought he would come face to face with Megatron. The legendary villain was thought to be long ago deactivated, but on Cybertron his power and his evil are still feared. He knows that to face Megatron is to face his own mortality. Megatron, on the other hand, does not know who this young Autobot is, and does not care. All he knows is that the Allspark is under this fool's protection. If he will not give it up, Megatron will tear him apart to get it. 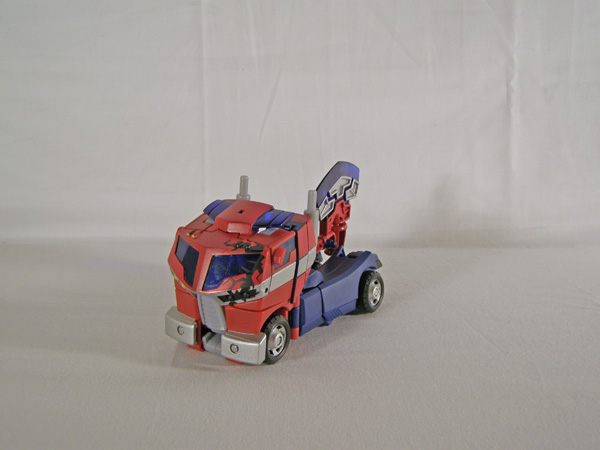 For this set, Optimus Prime is depicted in his Earthen alt mode, which is a truck cab. Interestingly enough, he features side exhaust pipes, which isn't noticeable in the animated series. The color scheme is classic Optimus Prime, with a red front sporting a silver sash along the side and a blue rear section. He carries his Energon axe on a peg in the rear. You can also spot the blue lightbar on his roof. As this is a battle damage set, Prime certainly looks worse for wear. The whole left front of his cab is cracked up with the headlights blacked out. The damage spreads to his bumper. 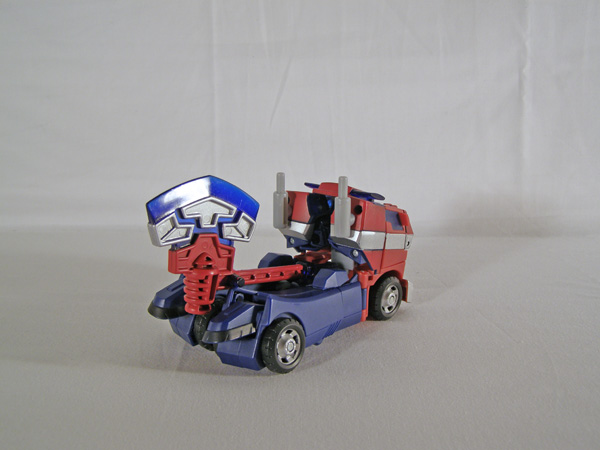 There are nice details for a Deluxe mold, including the side mirrors and window treatments. The only thing that detracts from this mode is the rear. The rear section makes up his legs in robot mode and you can tell. There is a nice, wide gap in between the 2 "sides". Some of that space is filled up by the axe, which in itself looks out of place on a truck (if the whole point of the alt mode is disguise). You can also clearly see arm kibble from the rear. Overall, a mixed result.

Optimus can be a bit tricky to get into form right. First, remove the axe and pull the back legs. It goes in two stages. First, the lower body area slides out, then you have to grab the upper legs and pull back on the blue part to form the calves. After doing this, turn the calves 180 degrees and flip the feet down. Next, flip the blue panels (where his legs connected to the cab) forward in a half-moon. The next part is tricky, as the roof is attached to the front windscreen by a nice and tight clip. Work it lightly so you can free the windscreen and fold it down. You can then fold the sides of the cab down 90 degrees.

At this point, flip the windscreen back up without moving the arm its attached to so you can form his chest. You will notice a small peg on that arm. This connects to the lower body/legs by aligning the peg BEHIND the chest and sliding the peg into the catch. Now, you can swing the back of the cab sides forward to form his forearms. The hands then flip out. Twist both arms in full 180 degrees and fold them down at his side. Finally, swing the roof down and flush it with his back to complete the process. 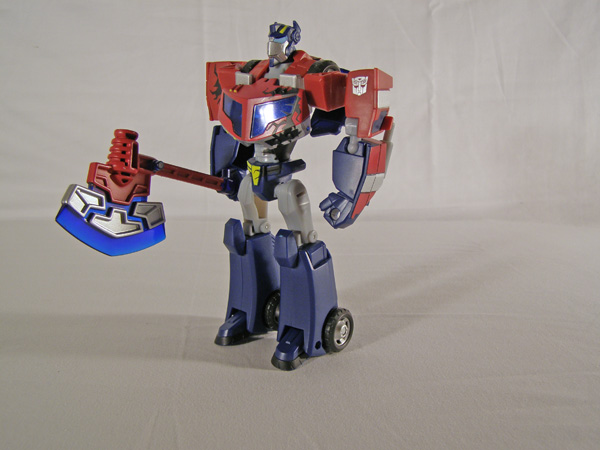 Part of the hype of the Animated line is that both robot and alt modes are true to the show. They've done a bang up job. Optimus retains his recognizable color scheme in almost scary faithfulness to the G1 figure. The hands are cocked at a 45 degree inward angle and sadly do not move beyond that. There is an Autobot insignia on the left shoulder. Being a battle mode, Optimus' robot mode features the head engaged in battle mode. You can barely see them, but the eyes are there and are piped in blue. 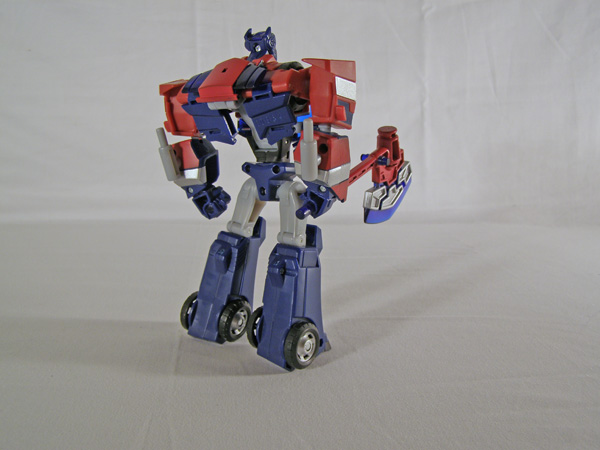 Prime's battle damage shows up more in robot mode. Along with the chest being ravaged, you can see damage on his right shoulder, lower abdomen and waist. His energon axe is a nice piece. The blade is done in blue translucent plastic. The handle is all red and there are silver metal-like pieces embedded in the blue. Catching it in the light at a good angle gives it a nice glowing quality. There is a gimmick built into Prime as well. He has robot punch action. Turn his waist 90 degrees to the right and he'll punch back to his original position. 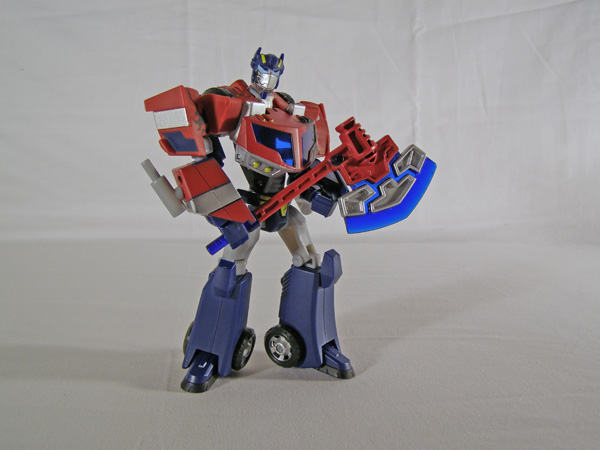 
The head will not rotate if fully upright, due to being caught in a groove. You have to nod the head down a bit to get rotation out of it. Overall, very posable if not slightly loose.

: Very nice figure for a deluxe, just don't pay much attention to the back end in alt mode.

Click here to see Optimus Prime via the Animated Database


No known weaknesses.
Scientific, strategic and engineering genius.
Fusion cannon can disintergrate up to 40 feet of solid steel 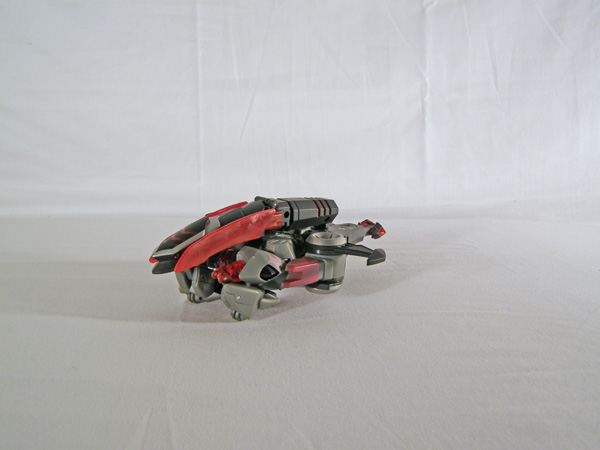 Interestingly, with Prime in his Earthen mode, Megatron is depicted in his Cybertronian mode. It is listed as a fusion fighter, which looks to be of the VTOL variety. The top and tailsection of the craft is done in black with red and silver accents. The lower body is in silver with some silver pinkish splashes that hint body damage. There are 2 landing wheels up front and a landing wheel on the rear, none which are retractable. 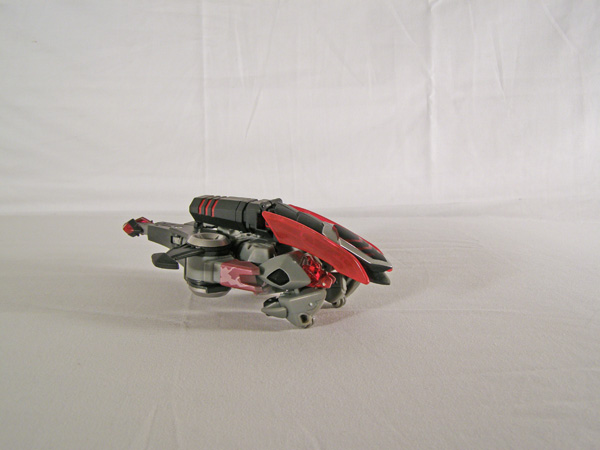 Unlike Prime, Megatron's alt mode is a complete fail. The head and arms are sorely visible from the front. Looking from the top, there are noticeable gaps throughout. The only thing really saving the lines of this alt mode is the attachment on top.

First off, pull the top attachment off. Split the tail rudder assembly and two and pull apart from each other at 90 degrees. This will split the leg assembly open. From there, you can pull the legs apart like a splits. The tail rudders then can fold up and tuck inside the legs to form his calves and kneeplates. You will notice 2 panels that formed each half of the rear landing wheel. Fold those in behind his legs. Next, take the wing assemblies and rotate them backwards 210 degrees until they fold up beside his legs. You can take the red sections at the end (his feet) and rotate them forward.

Now, spin his calves and fold the legs in towards each other to finish his leg assembly. Up top, you can fold his arms out so they're over his head. In a combined move, spin his shoulders 180 degrees while gently pressing down to finish making up his arm assembly. Finish it up by putting his fusion cannon in the peg on his right forearm (it only goes in one way). 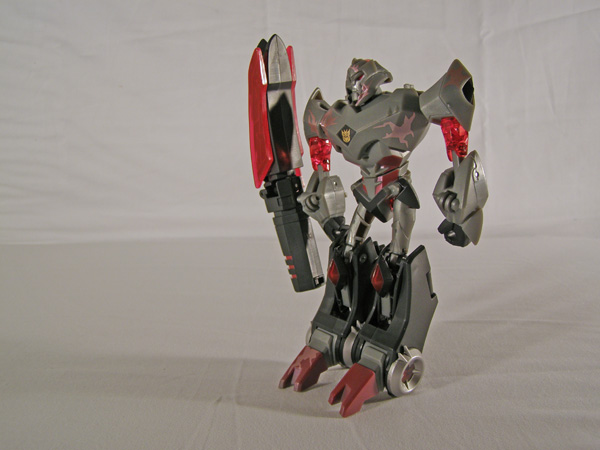 Megatron comes out looking much better in robot mode. He is mostly silver in appearance. The legs are a mix of silver at the ankles, red at the feet and knee guards and black on the calves. The upper arms are done in translucent red. He wears a gold Decepticon insignia on his chest. There is also some red on his abdomen. The head sculpt features red light piping for the eyes. 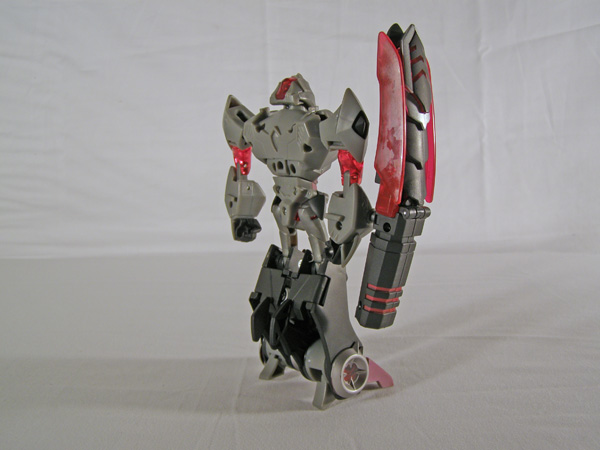 The battle damage is more visible in robot mode. The chest has several points of damage, as do both shoulders. The head also suffers from some gashes. The fusion cannon has the gimmick of converting to a sword (of sorts). Simply flip the back of the cannon up, then swing the right side red piece 180 degrees. Not sure how convincing of a sword this works out to be, though. Megatron features the same "punch" gimmich as Optimus Prime. 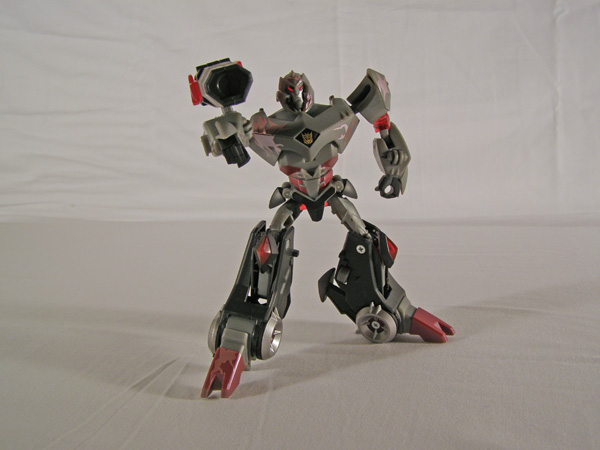 
The hips were extremely loose, which made posing somewhat difficult. With tighter hips, it would be very articulate.

: A bit loose, but good for a deluxe. Overall -

: Keep it in robot mode for best results.

Click here to see Megatron via the Animated Database 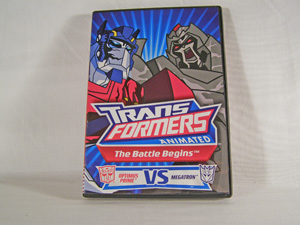 Sadly, I can't tell you much about the packed in DVD except it won't play on my computer right. From what I can tell, there is an episode and a gallery. The episode features Part 1 of "Transform and Roll Out". The gallery option shows all the figures to be released soon. From the looks of things, it is only meant to be played on a home DVD player, which is kinda subpar. 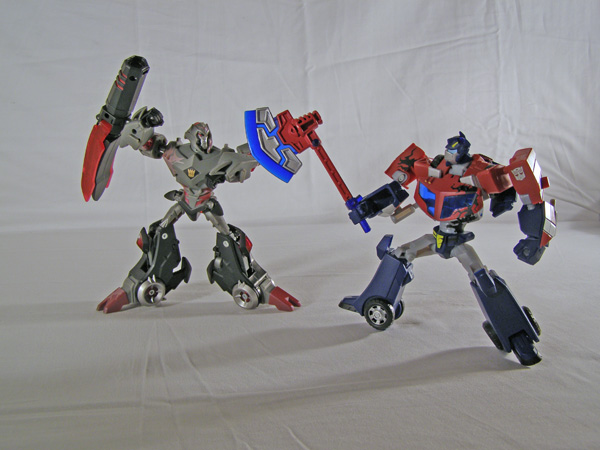 For $20, you can get both leaders featured in the Animated series. While they are simple incarnations of said leaders, and some people might not go for the battle damage, it's a fair deal. While not one that screams to be had, it's a nice and small set that has good play value, at least in robot forms.