In the Decepticon army, it just doesn't feel right having a Megatron to lead without a Starscream in the background stabbing his back at every attempt. Animated has held true to form with perhaps one of the most caniving and ambitious Starscreams to date. This review covers perhaps one of the hottest figures of the first wave.

"Power is its own justification"

No one really likes Starscream, not even the other Decepticons. Who can blame them though? He'll do whatever it takes to gain control of the Decepticons, even going so far as trying to destroy his commander Megatron. Of course, he's also nearly as powerful as Megatron, and just as sneaky. He's the fastest flier there is, and even Optimus Prime would have a hard time beating him in a fight. He's the best there is at what he does. Even so he sometimes overrates himself, and that's why he's still second in command. 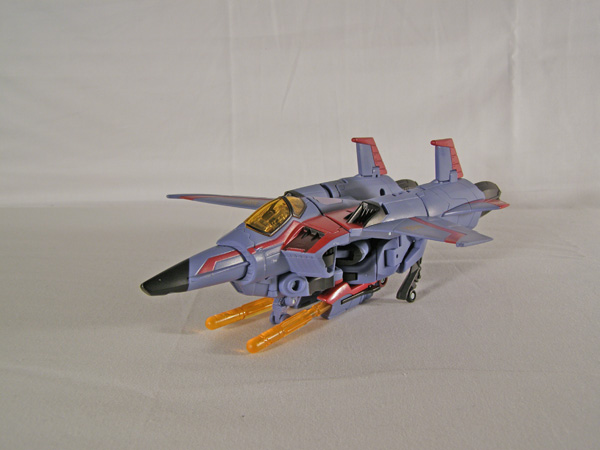 Starscream is almost always a jet, and there's no exception to that here. He is modeled loosely after the VTOL harrier jet. The main difference in features is the forward swept wings. The paint scheme is primarily a gunmetal type blue (more world accurate but almost like Thundercracker) with red accenting. The cockpit has yellow glass and has a semi-detailed interior. Gold Decepticon insignias are flanked on each wing facing rearward. 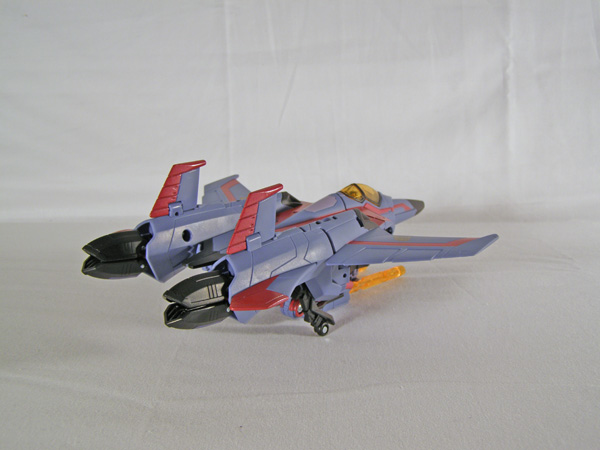 There are plenty of details to take ahold of on this figure. One nice detail is retractable landing gear. There is a forward wheel just under the cockpit's belly and a rear wheel on each of the thruster ports. Be warned that the rear wheels take a little effort to retract, so having a very thin prying tool might help. Starscream also features 2 missiles that can fold up in front or back of him. The missiles are yellow like the cockpit glass and are launchable. In initial photos, it looked like the thrusters/legs drew too much attention and weakened the look. However, there is a flap in the back that minimizes that effect.

This figure basically transforms itself! After folding up the landing gear and swinging the missiles to the rear, pull the rear thrusters from the main body and swing the legs down. As you do this, several automorphing features happen at once as you get the legs 180 over. First, as the legs are swinging around, the nosecone recedes into the cockpit area. Second, as the legs are almost in position the arms swing out. As this happens, the canopy in back pops back and reveals the head. All that's left to do at this point is make final adjustments to the limbs, lock the legs into the cockpit/abdomen and lock the canopy to the back. 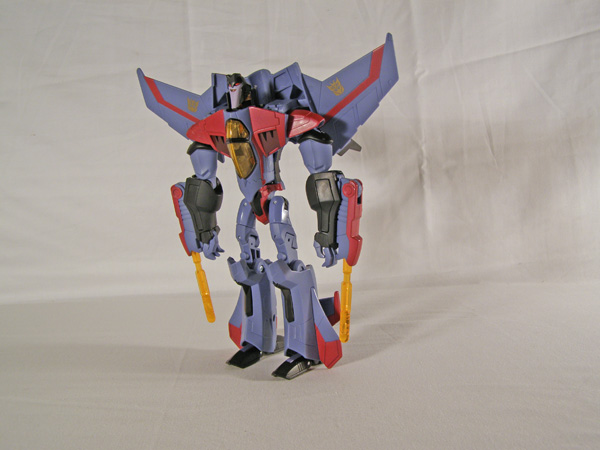 This is perhaps one of the best robot modes Starscream has possessed in years. Not only is it nicely proportioned, it's very agile. We'll get to the agility later. The only major color change are the black forearms. The overall scheme is instantly recognizable as Starscream, including the cannon on both arms, the wings on his back and the cockpit for a chest. 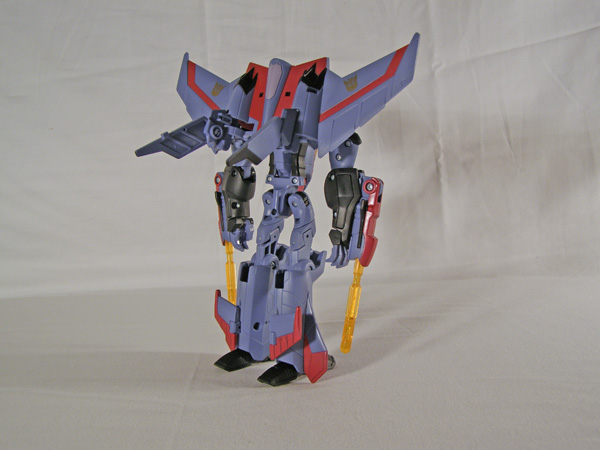 Most people might argue that the only real sour point of this figure is the head sculpt. True, it does have a strange resemblance to Jay Leno. Long chin aside, it's a fitting sculpt. The evil grin suits it well, and the orange light piping shows not only through the eyes, but the smile as well. One other feature is that he has hidden arm lasers. To access this, simply pull the arm cannons forward. 2 panels will pop out of each forearm exposing what are the lasers. 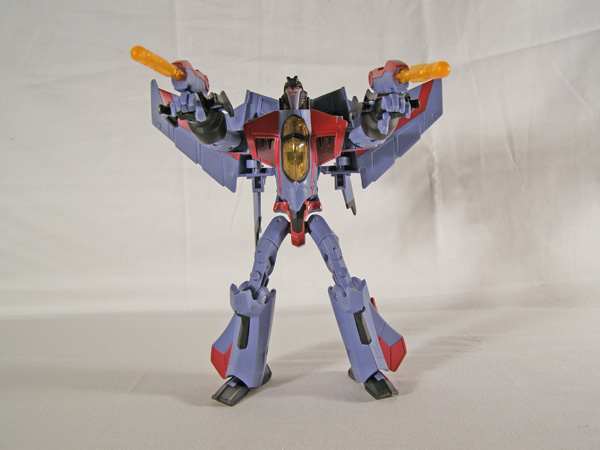 
The only real limitation are the knees, but overall a solid poser. The wings can make it unbalanced sometimes, but there always seems to be a decent way to counteract it.

: What can I say? Gotta have it! One of the best Starscream molds ever at a great price to boot.
Size Class: Voyager
MSRP: $20