After a long hiatus, Ratchet is starting to get some love again. Featured now in the Animated line, his persona is a mix of the G1 medic mixed with some cantankerous Kup. This review covers the figure released that portrays this war veteran and medic.

Autobot Ratchet was, at one time, one of the most promising medical minds on Cybertron. After his experiences with Lockdown though, all he wanted to do was disappear. An assignment to a deep space repair crew was just what he was looking for. He never wanted to be in the middle of a new war against Megatron, but if that's where fate puts him, he'll do his best to keep his comrades safe and sound. 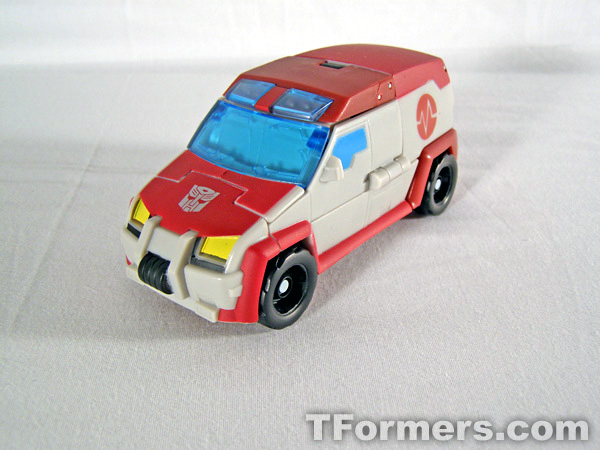 Ratchet appears as an ambulance, which is his normal guise. The van is mostly white, with red showing on the ground effects, hood and roof. Due to the Red Cross not wanting their logo anywhere on a figure anymore, we now have the "heartline" medic insignia on his rear panels. A pair of clear blue lightbars are mounted on the roof. He also sports clear blue taillights. You can also make out a winch on the front bumper, although it's purely for show. 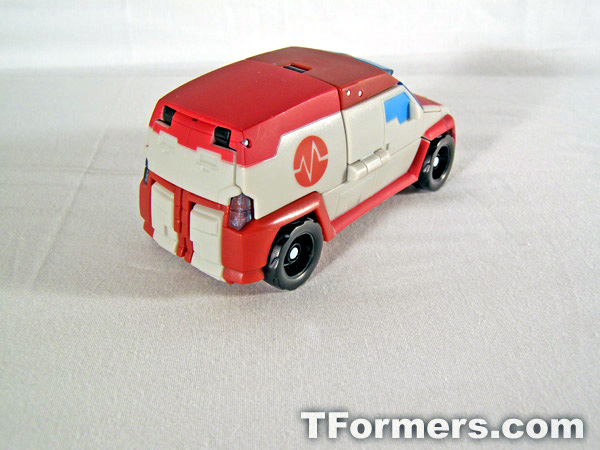 The detail for this figure is lacking in alt mode. At first glance, you might almost mistake it for a Scout class or a FAB type. It doesn't help that there's a hinge bulging out the side. Also, the rear section of the roof is a noticeably different shade of red than the cockpit area. The result comes out mixed. Overall, it a nice alt mode but it gives you the vibe that there was no afterthought put into it.

The figure is relatively easy to transform. First, pull on the rear panel and lift it up and over the cockpit area. Lifting it off the ground will let his legs fall freely. At that point, you can flip his feet out and be done with the legs. Next, take the lower section of the doors (where the exposed hinge is) and flip it up against the upper part. Gently place a finger under the front fenders and pull them out to free his arms. You can then wedge his shoulders out and forward, after which you can turn his arms down 90 degrees.

Next, gently push down on the hood and let it sink into his waist. Don't forget to pull his forearms down to give him his elbows. Once that's done, you can twist his forearms 180 degrees and place his fingers in their spots. Finally, moving the rear panel down to form his back will activate his automorph feature, as it will pop his head up. That's all there is to it. 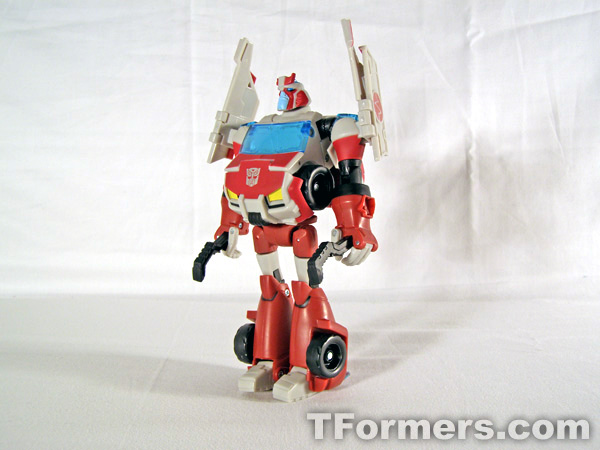 Ratchet has a nice bit of show accuracy in his robot mode. The red and white motif stays with him. The only real thing that voids the show accuracy is his magnet claws. There's only one half of the claw visible, and it's all black. You can either pull at it with your finger to flip them forward or keep them in place behind his arms. The head is dead on show accurate. It has the pockmarks on his face, the broken antenna on his right side and the blue face features. This includes blue light piping. Finally, you can notice the false transformation as he has his medic symbol on the folded up attachments to his shoulders, as well as on his back. 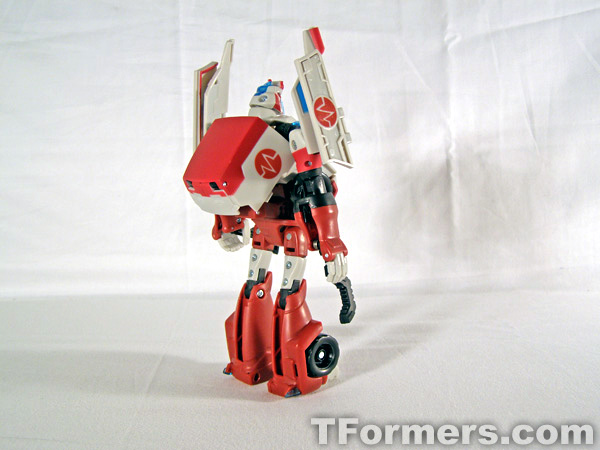 Ratchet's gimmick is that he has 4 tools to choose from. All 4 tools can be attached via a clip that snaps within his palm. You can choose between a body hammer, a crescent wrench, a scalpel and a grasping claw. You can put the tools in either hand. For the tools you don't need, they can be clipped to pegs on his back. Unfortunately, there's no place to store the tools when he's in alt mode. Last, you'll notice that recess in his left arm. That will be covered in the next review. 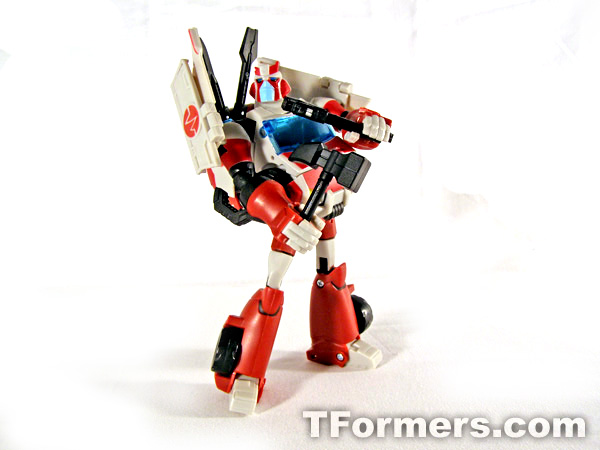 
Without the shoulder kibble, arm movement would be better. Also, due to his head transformation you can get him to look down (even if that wasn't in the design thinking). Otherwise, a pretty solid poser.

: The details are good in some places, bad in others. Could have been better.
Robot Mode -

: Only the shoulder kibble stops it from being perfect. Overall -

: It could have been better with a little more thought, but as is still a great value and worth the buy.
Size Class: Deluxe
MSRP: $10